1) The Rolling Stones are playing their postponed 2020 concert at Heinz Field this month. What more needs to be said? Unless you’re very young, very old, or an extraterrestrial, you’ve probably got a pretty good awareness of who The Stones are. But just in case, here’s some info about them. The Stones were a part of the British pop and rock invasion which started in the early 1960s. They are the yin to the Beatles’ yang. While the Beatles were seen as lovable guys with mop-top haircuts who created beautiful music, The Stones’ sound was a little rougher and the band members seemed a little dangerous.

Mick Jagger, The Stones lead vocalist and front man, was a contemporary of Pittsburgh native Andy Warhol. Warhol created the concept for the band’s Sticky Fingers album and the cover art for Love You Live. Like Warhol, Jagger is an astute businessman (having attended the prestigious London School of Economics) and has created multiple revenue streams for the band. Another Pittsburgh tie is that the Beatles made a decision not to come to the U.S. until they had a number one song here. The Stones made no such pledge and played the former West View Park’s Danceland on their first American tour in  1964. The audience was mid-sized and enthusiastic; they were just on their way to becoming famous. Other longtime band members are Keith Richards, and Ronnie Wood. Unfortunately Charlie Watts, one of the best drummers ever, moved on to the drum kit in the sky in August. The Stones have a touching tribute to him on this tour. Sitting in for Watts on this tour, is Steve Jordan, who has played with Keith Richards on his side projects for years. He also was the Blues Brothers’ drummer on their recordings.

The Stones have one of the best song catalogs in rock history. Highlights include: “Gimme Shelter,” “Beast of Burden,” “You Can’t Always Get What You Want,” and “Doo Doo Doo Doo Doo (Heartbreaker).” Opening act is Pittsburgh resident and part owner of the Steelers, Thomas Tull’s band Ghost Hounds. 8 p.m. 100 Art Rooney Ave., North Shore. 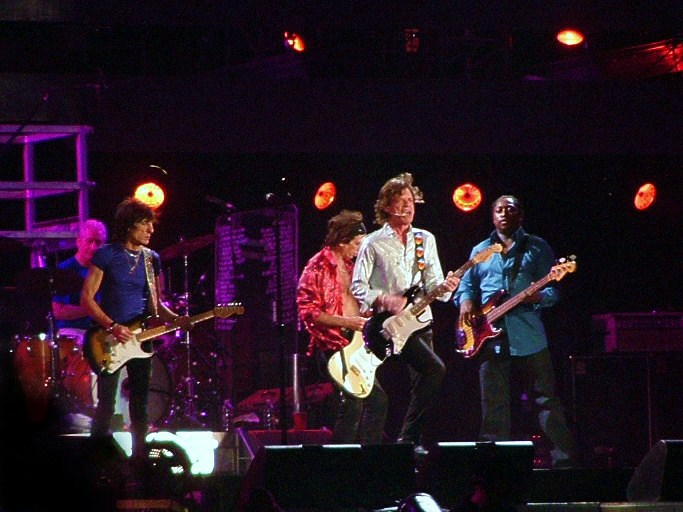 Rolling Stones concert in the Giuseppe-Meazza-Stadion in Milan on July 11, 2006. Photo courtesy of Severino and Wikipedia..