1) William Shatner, best known for starring as the courageous and wise, Captain James T. Kirk in the original “Star Trek” TV series and subsequent movies, is hosting a screening of the film Star Trek II: The Wrath of Khan. The showing will be at Carnegie of Homestead Music Hall. His appearance will be after the screening. There is also a VIP meet and greet with Shatner, who was in a very famous episode of “The Twilight Zone,” titled Nightmare at 20,000 Feet about a terrifying airline flight. As the event billing states, “Set your phasers to stun!” 7:30 p.m. 510 E. 10th St., Munhall. 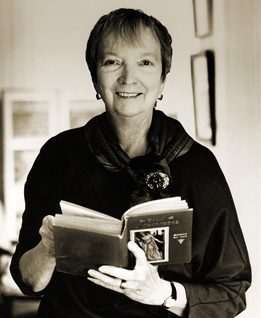 When ‘A Wrinkle in Time’ became controversial among some religious groups for its treatment of spiritual themes, author Madeleine L’Engle met the storm with a smile. (Photo: James Phillips for Square Fish Books, 1989)

2) In the category of books for young people that adults also love, A Wrinkle in Time ranks high, and now Pittsburghers can see a stage adaptation. Prime Stage Theatre promises a new version of the story, “reimagined for our day.” This is a mind-bending concept if you think about it, since the story involves time travel to begin with. But the universe contains mysteries that are best not over-thought. The play retains the basic plot and key characters of Madeleine L’Engle’s fantasy novel. The young Murry siblings and their friend Calvin, aided by the mysterious Mrs. Whatsit, traverse space-time in search of the Murrys’ missing father, an astrophysicist. A war between good and evil is under way, as forces both spiritual and supernatural collide, giving the youngsters quite a learning experience. The novel is adapted for the stage by playwright Brian Wongchaowart and Wayne Brinda, producing artistic director at Prime Stage. See A Wrinkle in Time at the New Hazlett Theater. 8 p.m. 6 Allegheny Square East, North Side. (M.V.)