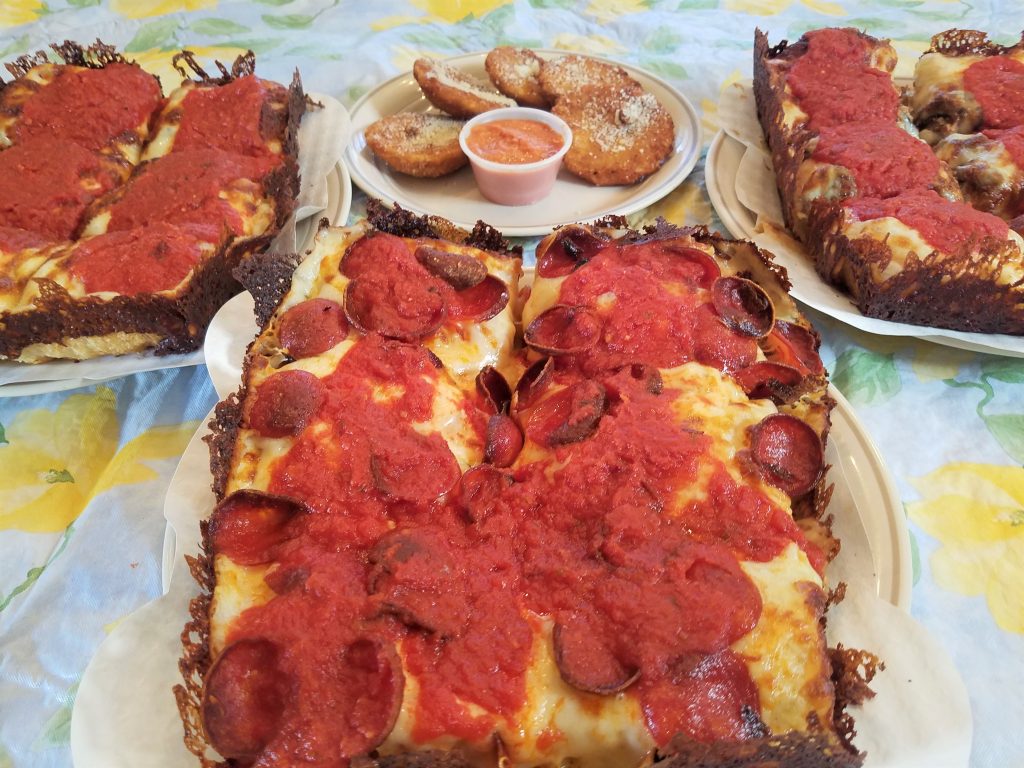 Detroit-style pizza has been a hot trend in Pittsburgh for a few years now with several restaurants being especially well known for them. Since opening in September of 2021, Driven PGH Restaurant at Federal Galley at North Side’s Nova Place has joined that group.

Detroit-style pizza is a square cut pizza, somewhat like the pan-baked Sicilian pizza. However the pans are smaller and either square or rectangular with two sides of each cut of pizza getting a delicious crust from being at the edge of the pan. Brick cheese is often used as a topping and also placed along the edge of the pan to add to the crispy crusts’ flavor. The marinara sauce (not pizza sauce) is spread on top in what looks like racing stripes after the pizza is baked. This pizza type is called a “red top.” The smaller pans are thought to have originated in Detroit’s auto industry as oil pans or pans to hold small parts for automobile assembly in.

Jake Stewart, Driven PGH’s owner, mentioned that he became interested in the food industry while growing up. He said that he always had a love for Italian food. His mom, Traci, who is a trained chef, would make some fantastic pasta dishes and other delicious food items. Stewart said he learned a lot from his mom. There’s even a pizza, The Traci, named as a tribute to her. 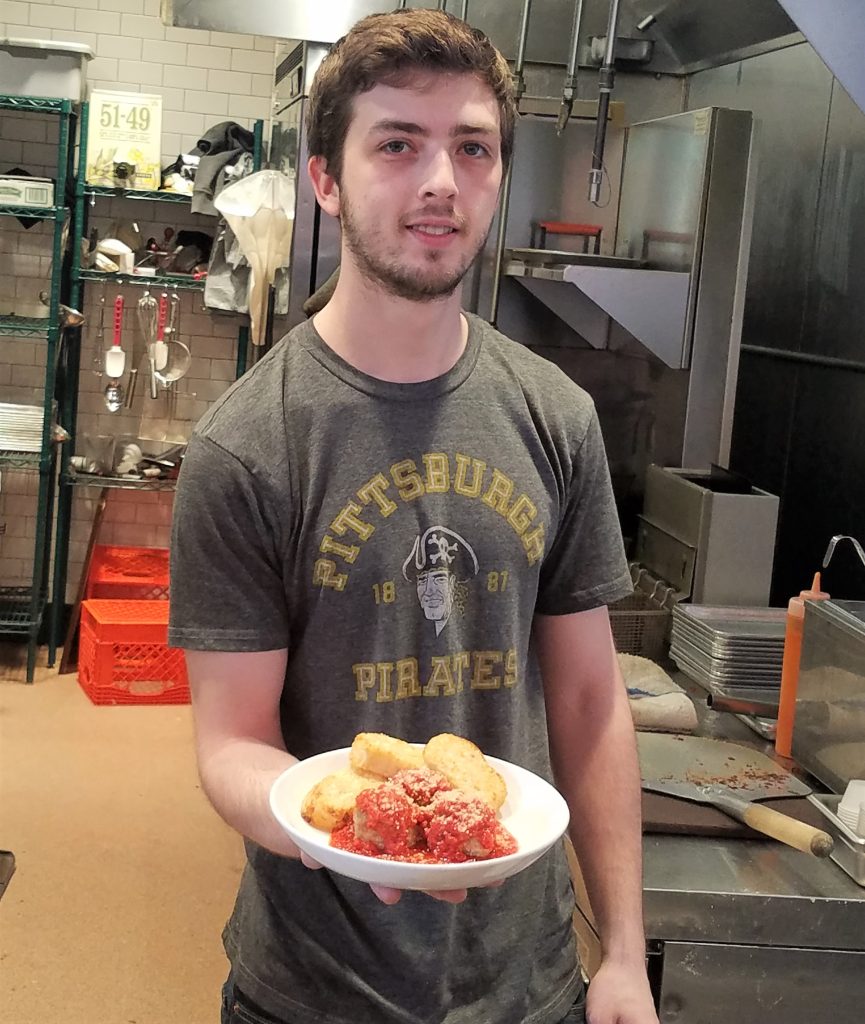 One of Stewart’s first jobs was in the pizza industry. He left to work with a caterer who offered a diverse menu of dishes and where he first started creating his own complete menus. Stewart also worked at a BBQ restaurant. The appeal of pizza lured him back to the genre. “I was looking for a place that used good, fresh ingredients and really cared about the product,” said Stewart regarding how he started working at Mercurio’s in Shadyside for several years. “I definitely feel like I found that there,” he continued. “I wanted to learn, I wanted to be able to cook a product I was proud of and wanted to eat too! And from there I really fell in love with pizza and different doughs,” Stewart said.

During the pandemic, the Fox Chapel native was perfecting his pizza recipes, working out of ghost kitchens, and selling his pies on Instagram and social media. Federal Galley saw his pizzas on Instagram and started a conversation that ultimately saw him open Driven PGH at the Galley.

When asked what attracted him to Detroit-style pizza, Stewart replied, “At first it was just that it was different, it wasn’t anything that I was used to. And then I loved that you can do traditional pizzas with it and also some really different pizzas like an al pastor (spit-grilled pork with traditional Mexican seasonings) pizza and a poutine pizza. Things like that where we can really go outside the box.” On Driven’s Instagram page they describe themselves as, “A new Detroit style pizza concept serving a modern take on classic Pizzeria fare.”

A few weeks before meeting Stewart I stopped at Driven to get some food to go. I ordered a red top, a pepperoni, and a Traci pizza. I wanted to order meatballs, but they were sold out so I ordered some fried ravioli. I took the pizzas home, shot some photos of them, and then began sampling them.

The pizzas all start with the same foundation—the dough. It was soft and pillowy with a deep, light flavor from the fermentation. Stewart said that he ferments his dough for 24 hours due to the high demand for it and lack of extra storage space. However, he recently had a beer dinner and said he aged a fermented beer dough for 72 hours. He and his crew make almost everything from scratch in-house.

The sides of each slice where it bordered the pan had the taste of rich, cheesy caramelization. Almost like a grilled cheese sandwich. On the pizzas I tasted, the menu has the cheese mix as mozzarella, parmesan, and cheddar, but Stewart says it’s more like a mix of mozzarella, provolone, and some buffalo milk. The white cheddar cheese is not on the top, but used to line the side of the pans. Stewart uses the white cheddar cheese instead of brick cheese as he feels it imparts a richer flavor. Parmesan is not on the Traci Pizza. 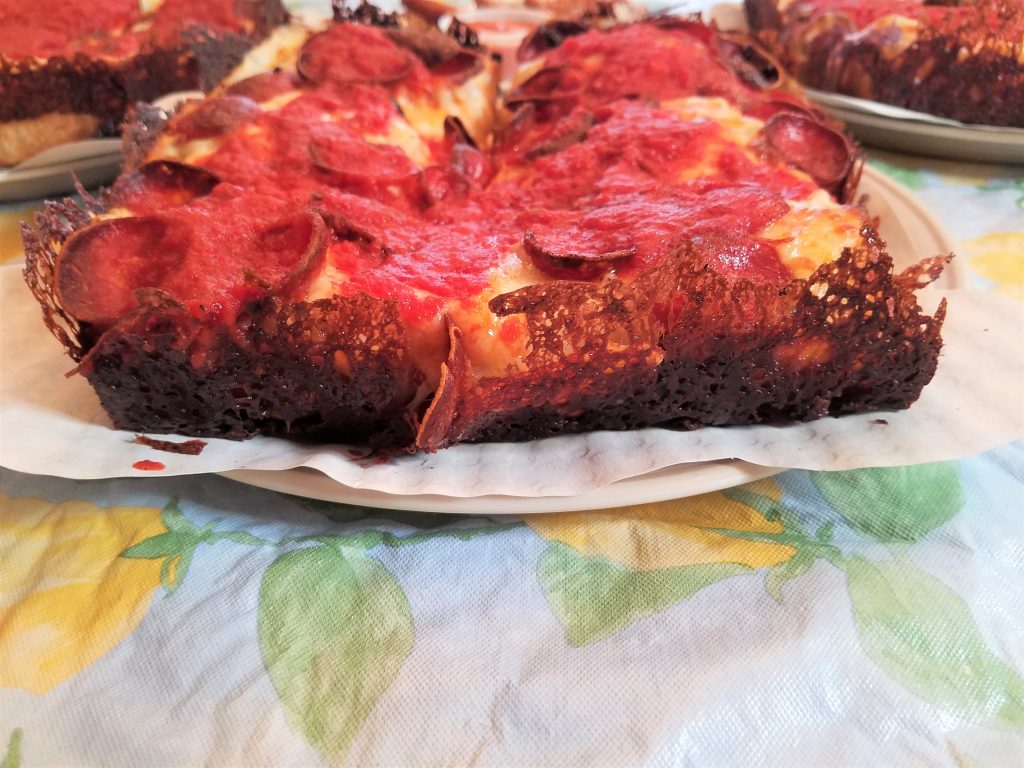 The marinara sauce was neither too sweet, nor too acetic. It was just right. It combined to good effect with the cheese on the red top pizza. The pepperoni pizza featured crispy and delicious thinly sliced pepperoni pieces.

The Traci pizza features sliced mushrooms and crumbled mild Italian sausage in addition to the cheese topping and marinara. The mushrooms and sausage were very savory with the mushrooms having a light dusting of seasoning. When I asked about the seasoning, Stewart mentioned that they sauté fresh bell mushrooms and add a little of their house seasonings mix to them. The Traci pizza is a pleasing combination of ingredients. The fried ravioli is pretty standard, but the vodka sauce that accompanied it was very good.

When I returned to Driven for my interview with Stewart I tried the meatball plate. The meatballs were juicy and flavorful with just the right proportions of meat, housemade breadcrumbs, and seasonings. Stewart said the meatballs are made with beef from Piedmontese cattle. (Piedmontese cattle is a breed of domestic beef cattle that originated in the region of Piedmont, in north-west Italy. This breed has a higher lean-to-fat ratio.) The meatballs are served in a marinara sauce with toasted Italian bread topped with parmesan cheese. 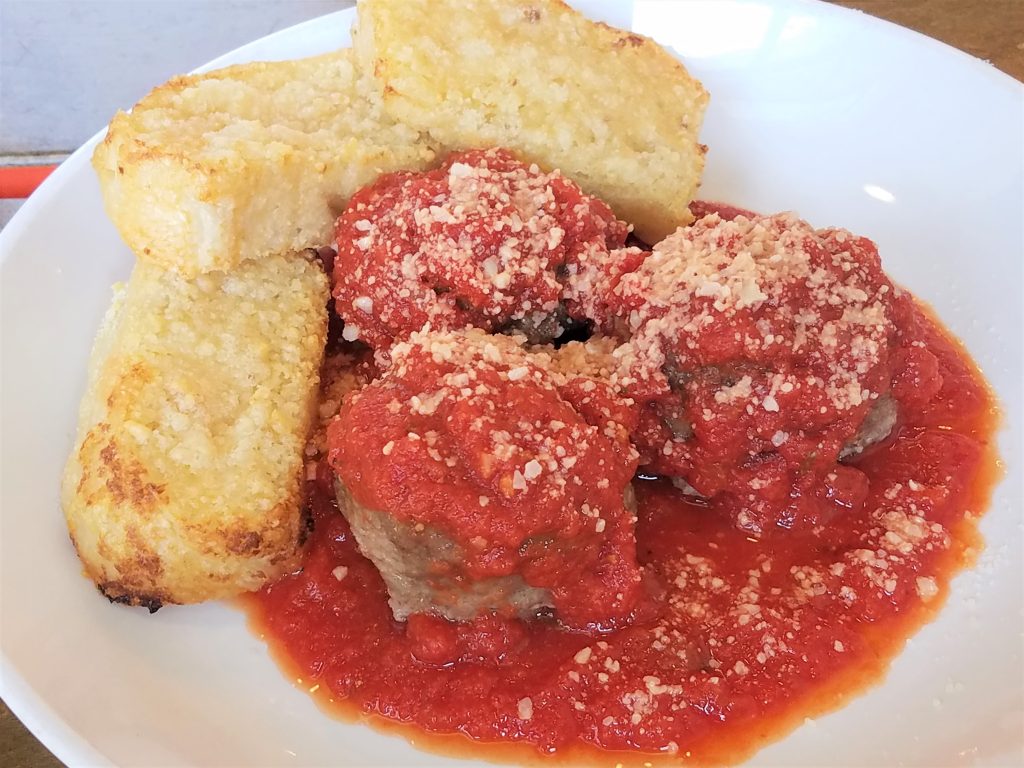 When asked what’s next for Driven, Stewart replied, “Settle in, build our nice customer base, and then maybe branch out to another part of Pittsburgh. Somewhere local, I like Aspinwall, it has a lot of families.” With Stewart’s love for pizza and high quality, fresh ingredients it will be interesting to see what other innovative food offerings he creates over his career.

Other pizzas on the Driven PGH menu include white, burrata, Buffalo chicken, vodka, pesto chicken, and PBR (pepperoni, banana peppers, and ricotta). Gluten-free crusts are available upon request. Pizza prices range from $14 to $17. Driven PGH also offers wings, salads, and an additional brunch menu on Saturday and Sundays (from 10 a.m. to 3 p.m.). Takeout can be ordered in-person or through the takeout app on the Federal Galley website.  And there’s a full-service bar at Federal Galley to quench any specific thirsts you may have. 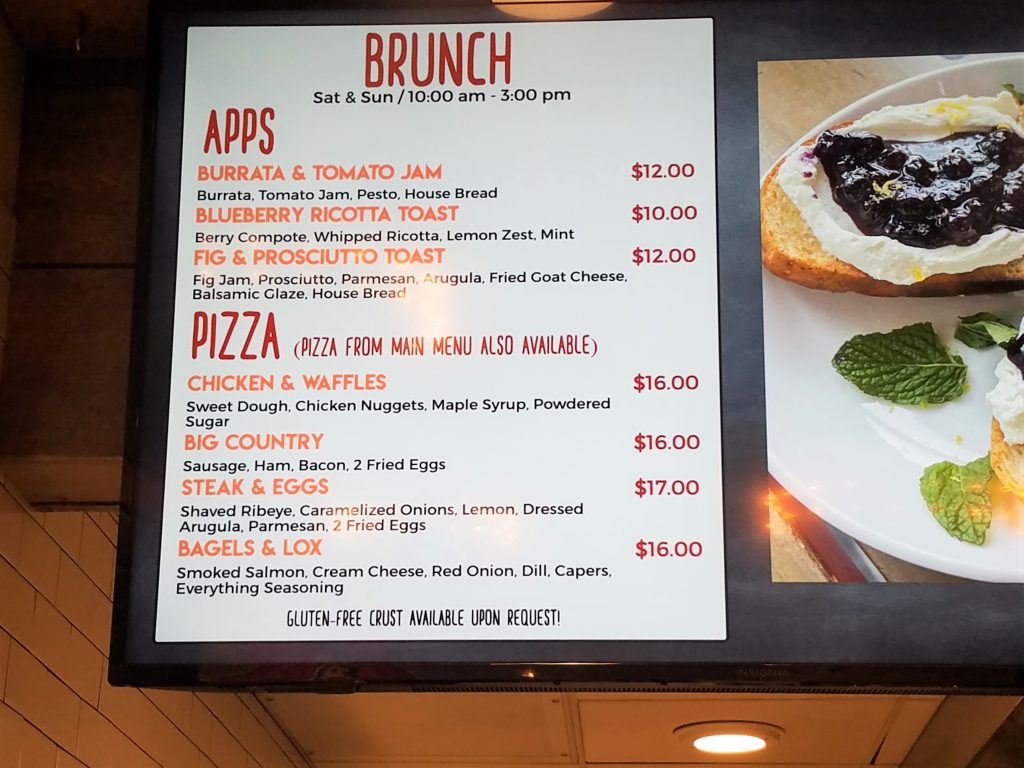