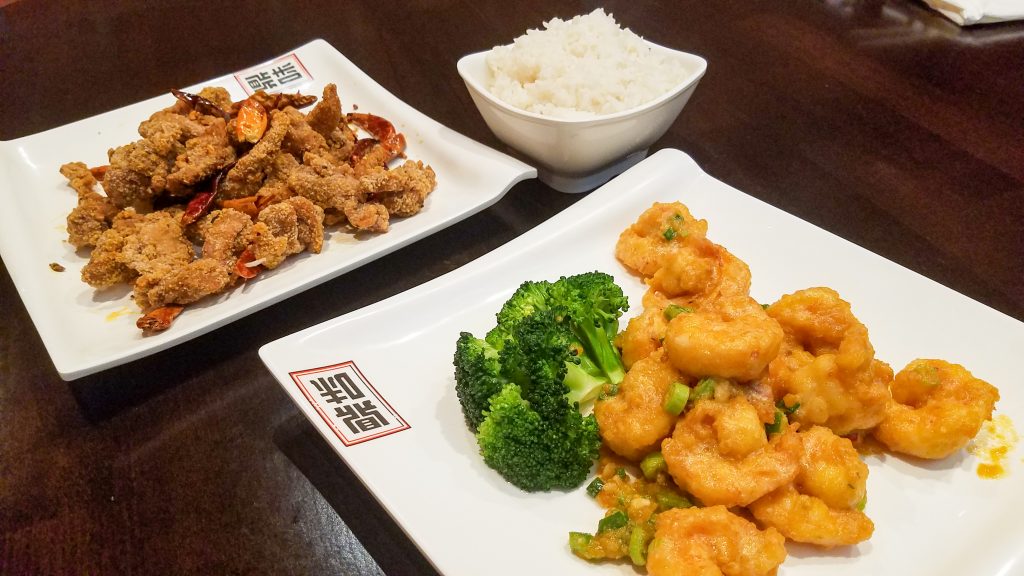 Looking to replicate the tasty foods of Taiwanese night markets, business partners Mike Chen, Steve Chow, and Ren Jiang opened Night Market Gourmet in Oakland. Chen was the original owner of Pittsburgh’s China Palace restaurants and currently the owner (with Chow) of Squirrel Hill’s Everyday Noodles. Also on board, as manager, is the affable Greg Katz, who ran China Palace Shadyside for years until it was recently sold.

After attending a seminar in late February at Pitt with my friend and associate Mike M., we headed to Night Market Gourmet on Atwood Street. I had been interested in trying it since they had opened in September of 2019 and I now had the perfect opportunity. Following the lead of Katz, and the delightful server Jazz, I ordered their specialties of prawn with duck eggs, Taiwanese style crispy chicken, Golden Tofu Nuggets and wonton soup (soups are only served for two so I got one serving to go). Mike went a more traditional route with shrimp and broccoli and an order of spring rolls. Before our apps came out, Katz brought over some samples of hen-of-the-wood mushrooms in a light marinade and braised cabbage for us to try. The mushrooms were light and flavorful, while the braised cabbage had some good heat similar to a Korean kimchi. Both items are served cold.

The Golden Tofu Nuggets (8 in an order) had a beautiful visual appeal, looking like round, perfectly browned and pan fried scallops. They were flavorful in an understated way, as tofu is by its nature, with most flavor imparted by being fried in oil. With the requisite hot chicken broth, scallions, and dumplings, the wonton soup was also good.

The main courses soon arrived. I first tried the Taiwanese style crispy chicken. The dish is composed of many short, slightly narrow strips of crispy deep fried chicken with a slightly spicy dry rub on it. It was very tasty. After getting almost halfway trough the entree, I thought, these would be also very good with some type of dipping sauce. I asked Jazz if she had a sauce that would be good to accompany my crispy chicken. She asked if I like a hot or mild type of sauce. I replied that I like both. She disappeared into the kitchen and reappeared several minutes later with two different custom-made sauces, one hot and one mild. They both were full of exotic Taiwanese flavors. After eating a little more crispy chicken it was now time to dive into the prawn with duck eggs.

The prawn with duck eggs had a vibrant yellowish-brown color to it. The duck eggs are cracked and beaten to provide a coating for the fried shrimp during cooking. They provided a deep, intense duck egg flavor to the shrimp. It was very different and good. A side of steamed broccoli was also on the plate. Mike reported that his spring rolls and shrimp and broccoli were delicious as well. With ordering two entrees to try I had plenty of leftovers for the next day.

Another aspect that I really enjoyed about Night Market Gourmet is the many dishes on the menu that aren’t seen much at other Chinese restaurants. The restaurant does also offer the ubiquitous traditional Chinese dishes that are on many restaurant menus like General Tso’s Chicken, kung pao chicken, and lo mein. I enjoy those entrees, but I know there’s so many more great Asian dishes with various flavor combinations out there and I want to experience them.

In writing this review I checked back in with Katz, he said that like many other restaurants theirs has been greatly affected by the coronavirus too, but that they’ve been holding their own with a strong take-out business. He also mentioned that they now are offering a second menu, the Chef’s Special Menu. Katz said that the menu features several very popular Taiwanese dishes like oysters omelette and braised beef noodle soup, and other selections including five spice flank steak, panfried white pomfret fish, and spicy intestine.There are many other items that I look forward to trying at Night Market Gourmet including: Chicken with basil and garlic in clay hot pot; braised pork belly with preserved vegetable, Be Feng Tong Shrimp, Korean BBQ, and possibly even the oysters omelette.

Night Market Gourmet also offers many vegetarian offerings. Weekday lunch bento boxes include choice of a pork, chicken, or fish entree with one braised egg and two kinds of vegetables ($9).  A selection of lunch specials of traditional Chinese entrees are served with steamed rice for $8 between noon and 2:30 p.m. Monday through Friday. Most menu entrees range from $10 to $18. And when things get back to normal they will resume offering shaved ices such as: red bean, taro, mango, strawberry, peach, and candy milk. They are offered with additional toppings for an extra charge. Night Market Gourmet doesn’t have a bar, but does offer BYOB for a $5 corkage fee per table.

Night Market Gourmet features both traditional and specialty Taiwanese and Chinese foods in a comfortable and sleek setting with friendly efficient service. Experience the savory foods of the Taiwanese Night Markets. 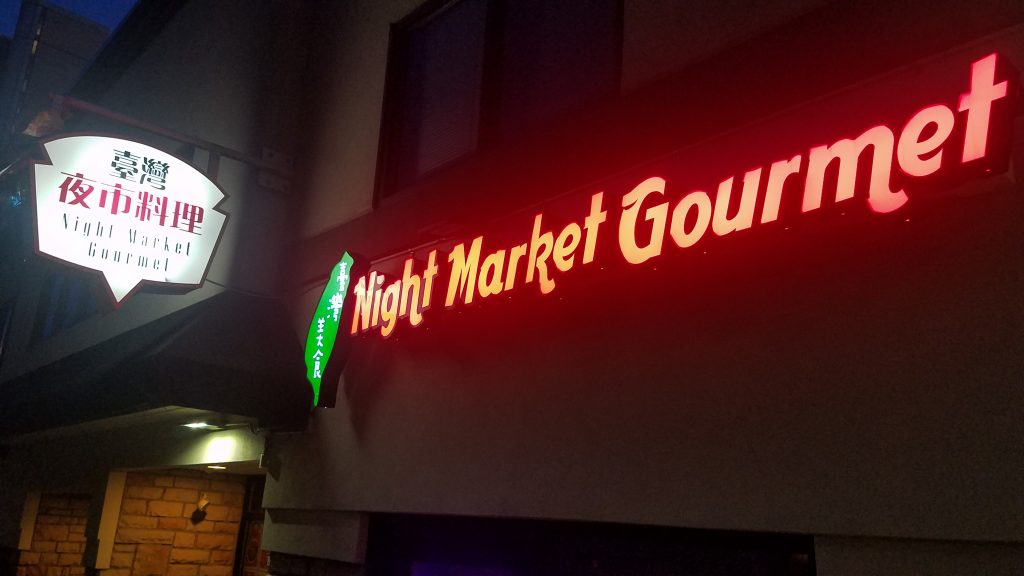