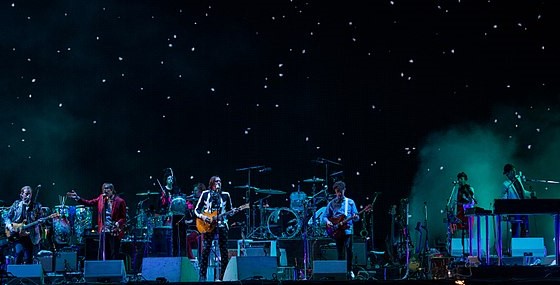 Ok, so no punches were thrown. Rather, Régine Chassagne wore a frilly, rainbow boxer’s robe over a yellow jumpsuit. The other five band members, plus three touring musicians, wore all white. Chassagne’s husband, singer Win Butler, wore a cowboy hat. They all appeared in the back of the lawn area as an instrumental version of “Everything Now,” the eponymous song from their latest studio album, played over the PA system.

Concertgoers rushed to get pictures as the musicians walked through the crowd to the stage. The instrumental began to crescendo and accelerate. Will Butler, Win’s younger brother, appeared center stage with a boxing bell. The music cut out, Chassagne rang the bell, and then she kickstarted a live version of “Everything Now” with an ABBA-like intro on her keytar.

The rest of the band fell into place, and things were soon rolling at full disco as the crowd, a mixture of Gen X to Gen Z, began to groove. Win Butler’s voice sounded world-weary (“Every inch of sky’s got a star/Every inch of skin’s got a scar”), yet it filled the venue, which was nearly sold out.

From here to the very last song, the mixing was perfect: drummer Jeremy Gara and touring percussionist Tiwill Duprate provided a solid foundation upon which the rest of the members, who often alternated instruments, built their sonic architecture. Touring member Stuart Bogie provided additional flourishes, whether on baritone saxophone or, in the case of “Everything Now,” flute.

The sun was setting, and the weather was humid, so appropriately the Haitian-influenced “Here Comes the Night Time” came next. This was followed by “Neighborhood #3 (Power Out).” Frantic guitar chords, played by Win Butler, Tim Kingsbury, and Richard Reed Parry added to the song’s urgency. It ended with a snippet of “I Give You Power,” a song the band recorded with Mavis Staples.

“Rebellion (Lies)” maintained the energy thanks in no small part to Will Butler, who banged a handheld drum throughout the song. (The junior Butler also goofed off a bit by throwing his blue jacket over Parry’s head. He later kissed Parry on the cheek to show it was all in good fun.) Additionally, former core member Sarah Neufeld filled the song with lush violin parts.

“Normal Person” was a decent rocker, but Win Butler really earned the audience’s heart when he thanked the crowd and then mentioned that his favorite childhood baseball team was the Pirates. He loved their merchandise and Barry Bonds (before he took steroids, Butler quickly added).

“No Cars Go,” which was buoyed by Chassagne’s accordion, was a highlight. Then the band reached way back to its first EP for “Headlights Look Like Diamonds.”

Win Butler confessed they hadn’t played the next song, “Deep Blue,” too much, and sure enough, it began with a false start. Better was “Electric Blue,” the first number Chassagne sang solo that night. She showed off her higher vocal register with a falsetto that was atmospheric.

“Electric Blue” saw the stage awash in blue light, but this wasn’t the only time visuals were paired well with the music. Throughout the night, a giant disco ball hung above the stage, and behind it, two screens projected close-ups of the band and audience.

That screen briefly turned into a movie marquee, which announced “Arcade Fire Presents The Suburbs.” The songs they then played from The Suburbs, winner of the Album of the Year Grammy in 2011,  showcased splendid arena rock: loud yet melodic. These included the title track, “Ready To Start,” and “Sprawl II (Mountains Beyond Mountains),” another Chassagne number.

For “Sprawl II,” she changed into black pants and jacket, both studded with sequins. She then proved her dancing was on par with her singing as she twirled silver streamers from each hand.

Next came the one-two, new-wave punch of “Reflektor” and then “Afterlife,” both from 2013’s Reflektor. Win Butler sang a snippet of New Order’s “Temptation” during the latter song’s outro. The synth-pop “Creature Comfort” gave Chassagne another chance to rock out on her keytar. A brief encore break followed.

During the concert, Win Butler thanked opener Hamilton Leithauser, who is also the singer of the currently defunct indie band The Walkmen. Leithauser’s songs were meditative, sometimes melancholy, but all anchored by his seesawing voice and a tight backing band.

Arcade Fire returned for its encore with the dreamy ballad “We Don’t Deserve Love.” Win Butler sang the first verse from a b-stage opposite the main stage. After the song ended, Parry then beat a giant bass drum. And so began the band’s arguably most well-known song and the last number of the night: the anthemic “Wake Up.”

At its end, Win Butler reminded the audience that a dollar from each ticket sold went to Partners in Health, a non-profit co-founded by Dr. Paul Farmer which helps developing countries, like Haiti. “Wake Up” was over, but its chorus, a series of gorgeous “ahhhs,” was sung by the crowd well into the night.

Christopher Maggio is a Pittsburgh-based writer and editor.