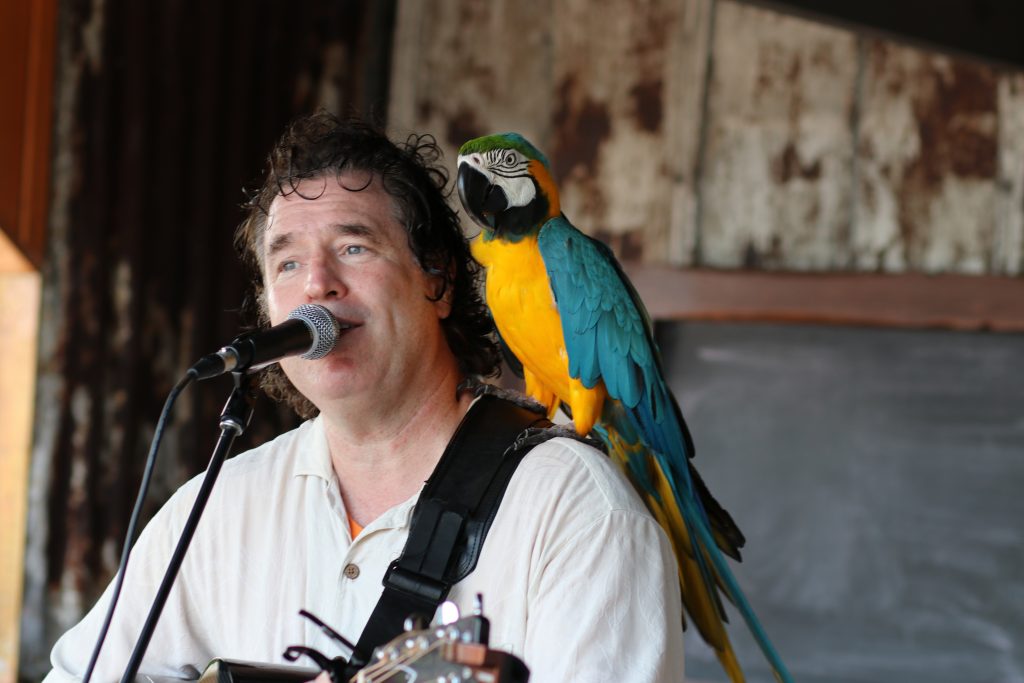 Singer-songwriter John McDonald entertained Pittsburgh audiences with his brand of Trop Rock songs for several decades. As a solo artist, and with his backing musicians, The Mango Men, McDonald has performed at a diverse list of entertainment venues including Atria’s, Roland’s, Sandcastle, Baja Bar & Grill, and the former Boardwalk floating restaurant and club venue in the Strip District.

Although the Boston native loves Pittsburgh, he found himself longing for a warmer clime, especially in the winter months. In 2017 he followed one of his Mango Men, Kevin Kornicki to Melbourne, Florida, where Kornicki’s wife, Cathleen, was serving in the Air Force at Patrick Air Force Base.

McDonald has returned to Pittsburgh every year since to perform at private and corporate engagements. He now returns to celebrate a collaboration that he did with Pittsburgh novelist Charles “Chip” Bell. A Pittsburgh personal injury attorney, Bell is also a prolific writer with a series of tropical adventure novels featuring protagonist/hero, Jake Sullivan. All books in the series have titles from Jimmy Buffett songs. Bell will hold a book signing event at Mastic Trail for his latest, and 19th book, Why Don’t We Get Drunk (Buffett fans will be able to fill in the next lyric of the song), on Saturday, October 2, from 2 to 6 p.m. The novel is set in Martinique so Bell decided to have the signing at Mastic Trail, a Caribbean themed brewery/restaurant in Glenshaw. 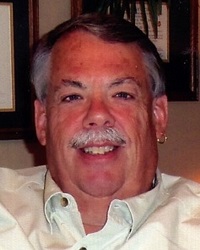 In a phone interview with Bell, he said the idea for his Jake Sullivan book series came to him one winter day while sitting in his Arnold, Pennsylvania, law offices. “It was a very cold day and I was wishing I was somewhere warm. Jimmy Buffett’s song “Come Monday” was playing on the radio, it’s my daughter and my song. I then thought about writing a story about going away for a weekend adventure and returning on a Monday. I needed a name for the main character, my dog’s name is Jake, I thought that would be a good first name and that Sullivan sounded good as a last name.” Each book involves Jake Sullivan in a tropical locale and a lesser known fact about the country that is tied into the mystery of the storyline.

His writing process, much like his attorney work, involves dictating each line onto a digital recording device. That way he can see how the dialog sounds. It’s then typed into draft form.

After using a Tarentum printer for several years, he took the book publishing and designing process in house. His daughter Jennifer, oversees each book publishing process. Bell self-publishes on the Amazon platform. Most of the books are also available as ebooks and audiobooks. 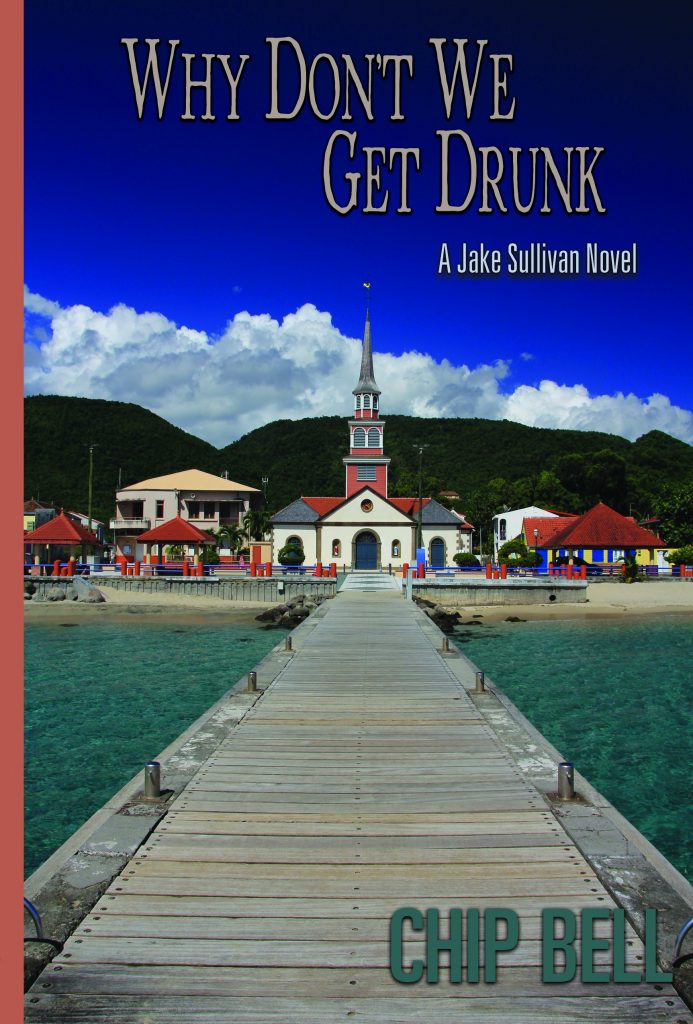 When asked what it was like to have a theme song accompanying Why Don’t We Get Drunk Bell replied that it was great and that John McDonald is a fantastic musician and he enjoyed collaborating with him on the song “La Diablesse (The Devil Woman). “I’ve been a fan of John’s original music for a long time and his career as a ‘Coastal Americana’ artist has really blossomed since his move to Florida,” Bell said. He added that he had also worked with a few other Trop Rock musicians on two other occasions, but that this was his first song for a specific book release. Bell also said that there are very strong relationships between tropical adventure writers and Trop Rock musicians.

McDonald said, “As a songwriter, I’m always looking for new sources of inspiration and Chip’s novels are chock-full of compelling characters and adventures, all of which take place in beachy, island settings that are right up my alley.” The resulting song, “La Diablesse (The Devil Woman),” McDonald wrote with musical collaborator Rick Beresford. 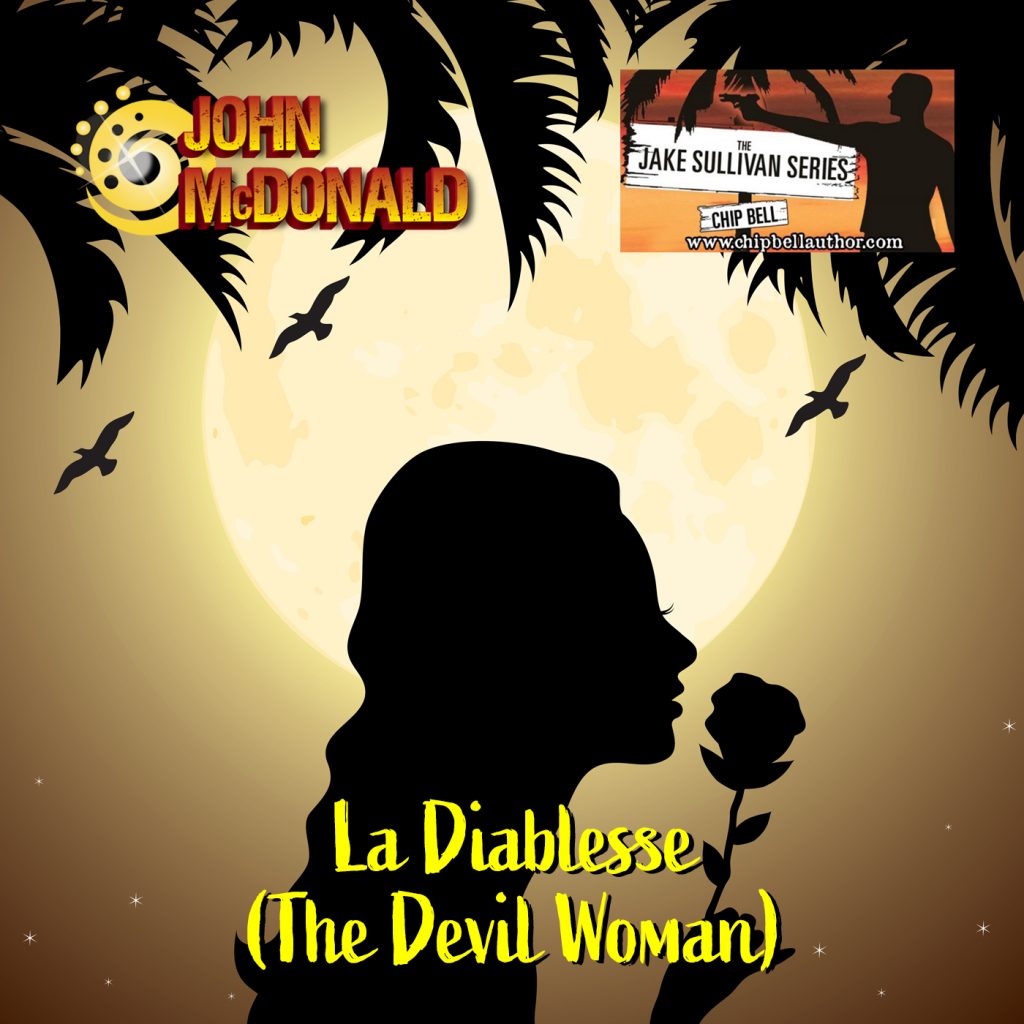 Bell and McDonald, fittingly, first met in Key West outside Captain Tony’s Saloon in 2018. McDonald will be performing the song and others from his catalog at the Mastic Trail event.

In regards to Mastic Trail having a Jake Sullivan beer, Bell said that his daughter, Jennifer and her husband, when they heard about Mastic Trail Brewing, they went to speak with the owner. They presented the brewery’s owner, Ben Williams, with the idea and he enthusiastically got on board, thus making the Jake Sullivan namesake beer. The craft brew has even competed in national beer competitions.

McDonald, during a phone interview from his home in Melbourne, Florida, said he got into Tropical Rock after hearing Paul Simon’s South Africa, world music-influenced album Graceland, which Simon followed up with a Brazilian-influenced album, The Rhythm of the Saints. He also likes the world music influences in the music of Jimmy Buffett, Sting, Peter Gabriel, and David Byrne.

McDonald’s latest album is Islandology. I asked him what the concept behind it is? He replied, “It’s very much a fun beachy record. The title track, “Islandology,” has the line ‘Islandology, that’s my philosophy.’ There’s a  lyric in that song that’s pretty philosophical. I was doing a beachside gig looking out at the water before I started and came up with the lyric, ‘Looking at a sea of blue, I realized there’s more to life than I ever knew.’” For Islandology both Kornicki (drums and percussion) and Dale Cinski (multi-instrumentalist), two of his original Mango Men, contributed to the recording. McDonald joked that it’s like he has a Polish band. He also has other Melbourne musicians that contribute to the band as well.

McDonald is presently nominated in eight award categories by the Trop Rock Music Association including Entertainer, Songwriter, and Album of the year. Now that McDonald lives in the tropics will he write songs about Pittsburgh? Either way, it promises to be a fun event with John McDonald and Chip Bell at Mastic Trail Brewing.