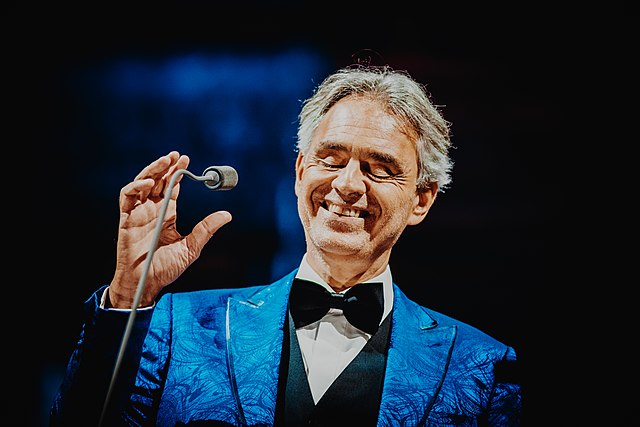 Andrea Bocelli returns to Pittsburgh this month for a concert at PPG Paints Arena. (photo: Jakub Janecki and Wikipedia)

As the classic Andy Williams song says, “It’s the most wonderful time of the year.” And December in Pittsburgh can be pretty wonderful musically too. We trim the town annually with a friendly visit from Trans-Siberian Orchestra and the last several years, New Year’s Eve concerts from Lotus. Additionally, like a warm cup of hot chocolate in a comfy chair, our hometown favorites perform shows during holiday times. We detail concerts by Joe Grushecky and The Houserockers, and Bill Deasy’s annual Boxing Day show.

Would you like a big box of funk for the holidays then you’ll enjoy the We Want the Funk Festival weekend at the August Wilson African American Cultural Center. Scheduled to perform are Cameo, The Ladies of SKYY, Lakeside, and ZAPP.

How about a blockbuster or two under the tree or menorah? We have Andrea Bocelli, Genesis, and REO Speedwagon in your size. Rising stars visiting for the holidays include Ingrid Andress, Beabadoobee, and Lindsey Stirling. Rounding out the fun is Guided By Voices.

This guide features (in chronological order) spotlighted picks, other shows of interest, and big shows on the horizon. Music can be spiritually uplifting and we can all probably use some of that. So get out there and see what pleases you, whether it’s one of our concerts or something entirely different. And please stay safe.

Vocal legend Andrea Bocelli will bring his talents to the PPG Paints arena. He was last here to support Sì, his sixteenth album and his first album of original material in 14 years. Sì features Dua Lipa, Josh Groban, and Ed Sheeran, who co-wrote “Amo soltanto te.” Now he returns to tour after releasing Believe in 2020 and  Bocelli, who was born in Lajatico, Tuscany, Italy, became famous across Europe after dueting with Luciano Pavarotti on “Miserere.” Bocelli performed his first concert in the United States at the John F. Kennedy Center for the Performing Arts in 1998. He has sold over 90 million records worldwide and has been nominated four times for a Grammy award. His concert in Pittsburgh is at PPG Paints Arena. 8 p.m. 1001 Fifth Ave., Uptown. (C.M.)

REO Speedwagon, who, mainly plays the outdoor shed during the summer concert season, flips the script and visits the Pittsburgh Area in fall and in a more intimate environment. The group will play two concerts over two night at Greensburg’s Palace Theatre. REO Speedwagon first achieved success with their 1978 album You Can Tune a Piano but You Can’t Tuna Fish, which contained “Roll With the Changes” and “Time for Me to Fly.” Their ’80 release Hi Infidelity had four singles that went on to become major hits. The band’s name is derived from the REO Speed Wagon, a 1915 designed by Ransom Eli Olds, of Oldsmobile fame. This is a great chance to enjoy a top band in a smaller venue. REO Speedwagon is celebrating the 40th Anniversary of their Hi Infidelity album. (R.H.)

Ingrid Andress is a rising star in the contemporary music scene. Andress, blessed with a very beautiful voice, attended the renowned Berklee School of Music. While there she sang in a acapella group called Pitch Slap, even performing with them on the NBC competition show, “Sing Off.” After graduating she moved to Nashville and wrote songs for artists like Sam Hunt, Alicia Keys, and Charli XCX. Andress’ first single, 2019’s “More Hearts Than Mine,” rose to no. 30 on Billboard’s Hot 100 and no. 5 on the Country charts. The debut studio album the single was from, Lady Like, rose to no. 9 on the Country chart. Andress opened for Dan + Shay at PPG Paints Arena in September, this month she’ll be playing a solo show at Stage AE. The special guest for Andress on her Feeling Things Tour is Georgia Webster. Doors open at 6:30 p.m. 400 North Shore Dr., North Shore. (R.H.)

“Word Up!” Cameo is playing the We Want the Funk Festival at the August Wilson African American Cultural Center the Friday night of the weekend fest.. The hot ’80s band was also known for the hits “Candy,” and “Back and Forth.” The band rose out of New York City, first as a 14-member group, the New York City Players, before changing their name to Cameo. Appearing with them are the Ladies of SKYY. Saturday night sees another top classic funk band, Lakeside. The group broke big in 1980 with their no. 1 R&B hit, “Fantastic Voyage.” The group formed in Dayton, Ohio, in 1971 when the groups The Nomads and The Young Underground joined forces to create Ohio Lakeside Express. Zapp, also out of Dayton, gets the party started at 8 p.m. 980 Liberty Ave., Cultural District. (R.H.)

Beabadoobee was scheduled to perform at the Thunderbird Café and Music Hall in March 2020 and then tour with the 1975 in North America when the pandemic hit. If you missed her at the Thunderbird, she’ll play at Stage AE this December. Born Beatrice Kristi Laus in Iloilo City, the Philippines, her family moved to London when she was three. A singer-songwriter, she composes Stephen-Malkmus-inspired songs, such as … “I Wish I Was Stephen Malkmus.” (Malkmus is the singer for the indie-rock band Pavement.) Beabadoobee has released five EPs, and one album, 2020’s Fake It Flowers, which appeared on a number of music publications’ best-of lists for that year. Christian Leave and BLACKSTARKIDS open. Doors open 7 p.m. 400 North Shore Dr., North Shore. (C.M.)

The prog rock group Genesis was started by five classmates at Charterhouse, a public boarding school in England in 1965. Those students were Peter Gabriel, Tony Banks, Anthony Phillips, Mike Rutherford, and Chris Stewart. In 1974 they put out an innovative concept double album, The Lamb Lies Down on Broadway. There first big hit was “Follow You Follow Me” in 1978. A blockbuster 1986 album, Invisible Touch reached no.1 on the U.K. charts and no.3 in the U.S. The albums five singles all reached the top of the U.S. Singles charts. Those songs included “Land of Confusion,” “Tonight, Tonight, Tonight,” and “Invisible Touch.” There have been hiatuses and members leaving the band for solo careers, most notably Collins and Gabriel. Now Collins, Banks, and Rutherford are on the road again as Genesis and are in concert at PPG Paints Arena. Genesis is playfully, and quite possibly realistically, as Collins has battled a few illnesses in recent years, calling this tour The Last Domino? Tour. Nic Collins and Daryl Stuermer are performing with Genesis. 8 p.m. 1001 Fifth Ave., Uptown. (R.H.)

The Benedum Center presents singer, composer, and violinist Lindsey Stirling and her Christmas Program. Her performances include elements of dance, choreography, and performance art. She released her first Christmas album (and fourth studio album overall) in 2017. It features covers of holiday classics and a few originals as well. She appeared on “America’s Got Talent” in 2010. Although she didn’t win the competition, her star continued to climb on YouTube. She is known for incorporating elements of dubstep and electronic music with her violin playing. Her autobiography, The Only Pirate at the Party, co-authored with Brooke S. Passey, her sister, was published in 2016. Stirling’s most recent album is 2019’s Artemis. 8 p.m. 237 7th St., Cultural District. (R.H., C.M.)

Guided By Voices (GBV), a lo-fi indie-rock band, will perform at Mr. Smalls Theatre. The band formed in 1983 in Dayton, Ohio. There’s been quite a few line-up changes and two hiatuses since then, but the one constant in the group has been frontman and main songwriter, Robert Pollard. As a solo artist, Pollard has released over 20 studio albums, and GBV has released at least 30. Feeling overwhelmed? GBV’s Alien Lanes, which was released in 1995 and consists of 28 short songs, is an interesting entry point. Pollard worked as a teacher before focusing on music full-time. He also opened for Pearl Jam at the late Mellon Arena in 2006. GBV’s most recent album is 2021’s It’s Not Them. It Couldn’t Be Them. It Is Them! 8 p.m. 400 Lincoln Ave., Millvale. (R.H., C.M.)

Bill Deasy’s musical career had been successful with the Penn Hills native performing solo shows and in a band called Shiloh. It took off to a higher level in a Grove City apartment when he and a few locals got together for a jam session. Those guys, and Deasy became The Gathering Field, the ’90s-era regional favorite. Since that humble beginning, Deasy has stacked up a résumé that would help him “make it” in a place like New York or L.A. He’s had a contract with Atlantic Records, opened for Springsteen and Dylan, and his “Good Things Are Happening” was a theme song for a “Good Morning America” video. Yet he’s remained rooted in Pittsburgh. In particular, Deasy likes to celebrate the day after Christmas here with his annual Boxing Day show—that’s an official holiday in the United Kingdom, Canada, and other British-related countries, as you may know—so join him for a tuneful Boxing Day at Club Cafe. 8 p.m. 56-58 S. 12th St., South Side. (R.H.)

In 1996, musician/rock band manager Paul O’Neill hit upon the idea that Christmas tunes could be totally progressive and the Trans-Siberian Orchestra was born. The TSO plays holiday music, traditional and originals, with a Rush level of elaboration and technical skill, all of which has racked up millions of album sales. You probably know the band’s wailing, synth-infused version of “Christmas Eve/Sarajevo,” a.k.a. “Carol of the Bells.” It’s one of the most hardcore tracks that DJs pull out every December. Music like this deserves the arena treatment, with a great light show and all, so the TSO has been touring major venues at the holiday season annually. Paul O’Neill passed away from chronic health problems in 2017, and bassist Dave Z (David Zablidowsky) died that year too, in a motor vehicle accident. But the band plays on—surely, as these men would have wished—and the TSO visits PPG Paints Arena for matinee and evening performances. The new show is billed as 25 Years of Christmas Eve and Other Stories. 3 and 8 p.m. 1001 Fifth Ave., Uptown. (R.H./M.V.) 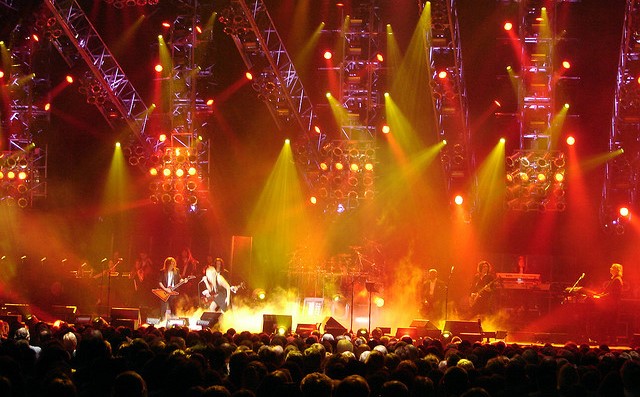 The Trans-Siberian Orchestra performing at the Hershey Giant Center in 2004. (photo: Matt, TSO, and Wikipedia)

Lotus has a history of playing shows on or around New Year’s Eve in Pittsburgh. For example, the jam band performed at Stage AE on December 27, 2019. We all know how 2020 went, so no Lotus show that year. Now they will play concerts on December 30, 2021 and December 31, 2021 at Mr. Smalls Theatre. The band, originally from Indiana, is known for incorporating electronic elements into its music. On 2016’s Eat the Light, the group tried something new: vocals, with a different guest musician on every track. Concerts include elaborate lighting and occasionally themed shows. One 2009 concert saw David Bowie costumes. The band members play covers as well as originals during themed shows. 2021’s Citrus is Lotus’s latest album. 8 p.m. 400 Lincoln Ave., Millvale. (C.M.)

Several Big Concerts on the Horizon