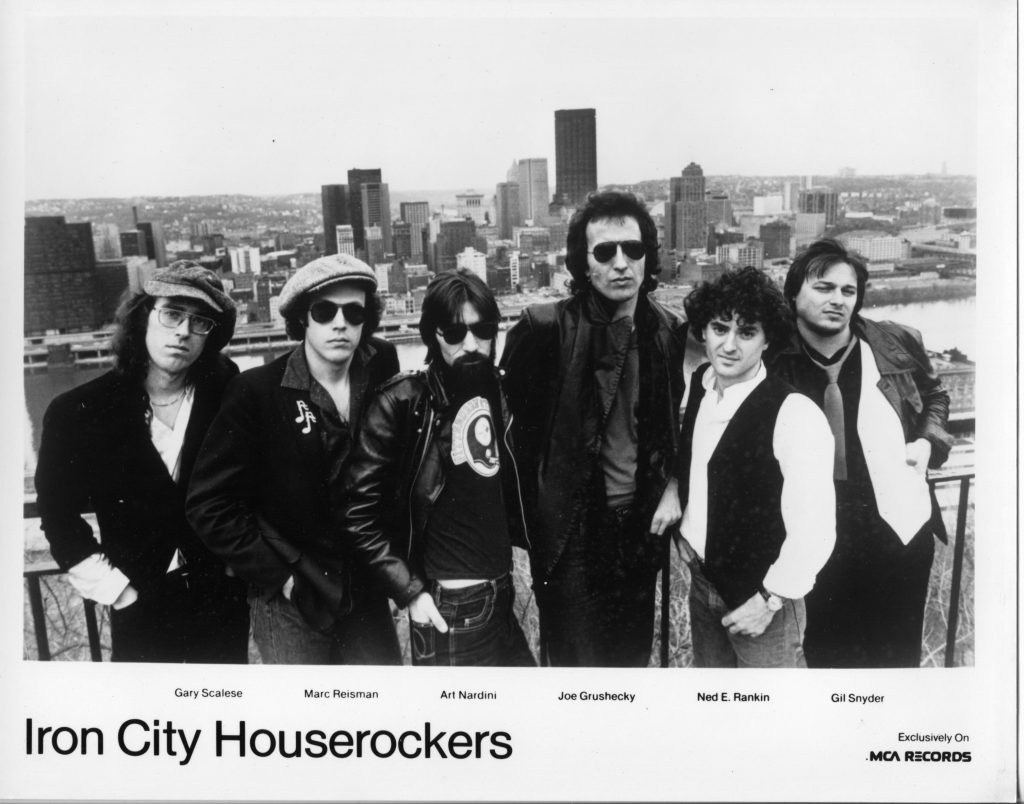 Joe Grushecky and The Houserockers will reunite with two former bandmates from the earlier incarnation of the band—the Iron City Houserockers—at Crafthouse Stage & Grill on Saturday, May 18. They will be performing with former members Art Nardini and Marc Reisman. Nardini, band cofounder and until recently a mainstay of The Houserockers, is unfortunately no longer an active member due to an injury that makes it more difficult for him to play his bass guitar for long periods. Ned E. Rankin was scheduled to perform, but is unable due to a recent injury of his own. Grushecky and The Houserockers have added keyboardist Joe Monroe as a special guest for the concert.

Grushecky recounted how the Iron City Houserockers came about: “Art and I knew each other; we played together in high school and college bands. After college, in early 1976, I was playing in a cover band at an after-hours club on the South Side from 2 to 5 a.m. Art came to see us play and told me that he wanted the two of us to start a band, play and write songs, and make a record. He knew I liked creating original music as he did too.” Grushecky continued, “Art and I were very focused. I bought equipment for my place on Southern Avenue. We practiced in my basement five nights a week, writing and recording demos.”

Grushecky said, “By the time we got to The Decade we were playing two sets a night. At that time due to musician union rules, a band would do four sets a night—40 minutes onstage and 20 minutes off. We didn’t have enough original material yet to fill four sets so we kind of broke that mold by only playing two sets. We liked playing the later sets. In addition to our original material we played covers that were well suited to us. Songs from Lou Reed, John Lee Hooker, The Rolling Stones, and Van Morrison. Songs with a lot of blues and harmonica.

“We worked hard at improving our writing, recording, and performing. We were getting well established, playing every Thursday and Saturday night at The Decade in Oakland. We had become a well oiled machine.

“We sent demo tapes to Steve Popovich, who was a boy genius at Epic Records, even working with The Jacksons and Boston and many others before starting his own label of midwest rock, Cleveland International Records. He was trying to create a recording company like Stax and Sun Records.

“Within a few months, as I was getting ready to drive to a bar gig, I got a call from Steve Popovich saying that he really liked our demo. Steve invited me to come to his house in Cleveland for a party. We were greeted by Ronnie Spector when we got there. Wow! He signed us and had us change our name from The Brick Alley Band to a name with a more midwestern feel, thus the Iron City Houserockers were born. Steve took us under his wing, financed our recording, and sent us back home to Pittsburgh with one of the greatest gifts anyone can ever give, hope!

“Steve, one of the Slimmer Twins, along with his partner Marty Mooney—they were called this because they were both big guys—had us start recording in Cleveland. We were like road warriors. After playing a Thursday night show in Pittsburgh we would drive to Cleveland to begin recording at noon. Then we would drive back to Pittsburgh for a Friday night gig. The whole city rallied around us. There was really only one other local band playing original songs, and that was Diamond Reo.”

Grushecky said, “With Popovich and Mooney’s support we were then signed to a record contract with MCA. April 20,1979 was the official release date for our first record, Love’s So Tough.”

I asked Grushecky if there was a concept behind Love’s So Tough. He replied, “We didn’t have a particular concept for the album. I was writing as much as I could. Writing, playing, learning. At that point our band lineup had solidified so I started writing more for our particular talents. Punk was also big at that time and Art liked that genre, so we had a little punk influence in some of our music. Other bands that had some punk influence at the time were The Police and U2; both of them played The Decade. Art and Marc had their own free-form music show on WYEP-FM, ‘Black and Blue Midnight.’ They were exposed to and played many different types of music.”

When asked how he first saw a copy of the Love’s So Tough album and how he felt about it, Grushecky said, “I got a call from Steve, who was a master of promotion, that he had arranged for DJs Jimmy [Roach] and Steve [Hansen] to play some songs from the album and that Art and I should go to the WDVE-FM studios in Downtown. When I first saw the album I was surprised! Our band wasn’t on the cover. A woman was on the cover. We had a bunch of photos shot of the band by noted photographer Neal Preston. We had a lot of input on the music but none whatsoever on the artwork. People ask me who the woman on the cover is and I have given out many different answers over the years,” Grushecky said wryly.

Then he added, “After talking to Jimmy and Steve at WDVE studios I was driving back to my place on Mt. Washington and one of the songs from the album came on the radio. I thought to myself, ‘Our dream came true!’ When I got home I read everything there was to read on the album cover and watched the album go around and around on my turntable, thinking: My dream came true.”

In 1979 Love’s So Tough reached 201 on the Billboard Bubbling Under the Top LPs and 164 on Cash Box Top Albums charts. Greil Marcus, the famous rock critic at Rolling Stone, wrote, “The Iron City Houserockers come from Pittsburgh (surprise), and their debut album is strong, passionate and a little desperate. They’ve made one of the least polished first al­bums I’ve heard in the last year, and one of the best.”

The Iron City Houserockers followed up Love’s So Tough with Have a Good Time but Get Out Alive! in 1980. Their sophomore release was also successful and got the band more notice from the national music media. Their last LP as the Iron City Houserockers was 1981’s Blood on the Bricks. They then dropped the Iron City from the band’s name in order to broaden their geographic appeal. Their final album in the early years was 1983’s Cracking Under Pressure. The release like the previous three was rated highly by rock journalists, but not a big commercial success. Only two days after releasing the album MCA dropped the band. The following year the Houserockers disbanded.

Grushecky and Nardini reformed the band as Joe Grushecky and The Houserockers in 1989. They have had continuing success playing both local and national shows. Grushecky and the band have played and collaborated with many famous musicians, most notably Bruce Springsteen. The group has also released 11 albums with their latest being 2018’s More Yesterdays Than Tomorrows.

According to Grushecky, Steve Popovich Jr. has recently revived the Cleveland International Records business that his late father started. Grushecky and The Houserockers will perform in the company’s “Relaunch Concert” on May 11 at Cleveland’s Beachland Ballroom.

The current lineup in addition to Grushecky is Johnny Grushecky (Joe’s son, who also has his own band, Milly), Jeffrey “Joffo” Simmons, Danny Gochnour, and Jeff Garrison.

Watch a video of Joe Grushecky and The Iron City Houserockers performing “I Can’t Take It’ from Love’s So Tough at the Agora Ballroom in Cleveland in 1979 presented by WMMS FM.