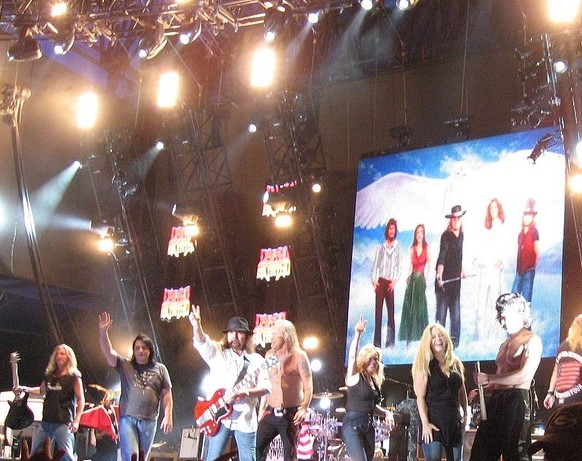 Lynyrd Skynyrd at the end of a set in New Brockton, Alabama in 2008. (Photo: jayuzi and Wikipedia).

Skynyrd Nation descended upon KeyBank Pavilion Saturday night packing parking lots, the amphitheater and the lawn. The sold-out concert featured Lynyrd Skynyrd on their Last of the Street Survivors tour. Also on the Southern rock bill were Hank Williams Jr,, 38 Special, and The Marshall Tucker Band.

Before Skynyrd took the stage a video montage of Skynyrd albums ran on a large screen on the backdrop behind the stage. Then an animation of an old car radio with knobs and a station selection indicator bar appeared on the screen.

As the tuning knob turned and the frequency selector moved up and down the dial stopping at various places and well-known songs played for a few seconds at each stop including ones by Elvis Presley and Led Zeppelin. The last stop for the frequency indicator played Bob Seger’s “Old Time Rock and Roll.” As the song continued to play members of Lynyrd Skynyrd strolled onstage, took up their instruments and went full-bore into “Working For MCA.” The band sounded great with everyone performing together like a high-performance race car.

Lead singer Johnny Van Zant called out “How ya doing Pittsburgh? And then the group played the song “Skynyrd Nation.” Afterwards rolling into “What’s Your Name?,” a major hit from 1977’s Street Survivors LP. The band generating a wall of sound as backup singers The Honkettes and the horn section joined the fray.

Honky tonk piano by Peter Keys combined with the extremely powerful guitar battery of original Skynyrd member Gary Rossington and longtime member Rickey Medlocke. It was fantastic to see the two main lead guitarists in Skynyrd’s triple lead guitar array join together for a side by side jam. They would revel in this several times throughout the night. Medlocke would often be in a state of frenzied exaltation as he squeezed beautiful musical juice out of every note, while Rossington was more subdued, looking down at his guitar as he generated notes with the power of a nuclear reactor.

The third lead/rhythm guitarist Mark Matejka was a positive force in his own right both in jams with other members of the triple guitar attack and in his own featured solo moments. One of the guitars he played was a Fender Stratocaster.

During “Travelin’ Man,” old footage of the original Skynyrd members ran of the band on busses and planes while traveling across the U.S. The video also showed the late lead singer and older brother of Johnny, Ronnie Van Zant singing “Travelin’ Man.” It was a time travel duet between the brothers as they each sang certain lead parts. When Ronnie was singing the band would turn their backs to the audience and play to the video screen. It was a remarkable rendition of the song.

Next the band tore into another Street Survivor’s mega hit, “That Smell.” As the triple guitar attack blazed through the killer riffs in the song, drummer Michael Cartellone  provided strong beats and fills. The smell of some marijuana smoke wafted on the summer breeze. Medlocke was dressed in black pants with a chrome chain dangling—possibly a truckers wallet chain, black T-shirt and black vest. He played several guitars throughout the night including a Gibson Explorer with a whammy bar, and a black Gibson Les Paul. Rossington wore a black flat-brimmed, western-style hat, turquoise shirt unbuttoned and over a black T-shirt and black pants, he also had a small cross on a chain around his neck. Throughout the evening he mainly performed on his Gibson Les Paul guitar.

After the song, Van Zant told the audience, “Pittsburgh is very dear to us. We recorded Lyve from Steel Town here in 1997. It went platinum and there’s a plaque in the back about that. We appreciate that you all have always come out for us.” Van Zant, who sounded great on vocals all night and was a strong and enthusiastic frontman for the band, was dressed in black pants, black T-shirt, black leather vest with the American Flag on the back with the words United States underneath. A small cross hung around his neck from a chain.

Street Survivors’ “I Know a Little” followed. The band and crowd revved back up for “The Needle and the Spoon” with its prosaic line “I’ve seen a lot of people who thought they were cool/
But then again, Lord I’ve seen a lot of fools.” “Saturday Night Special” with it’s rat-a-tat heavy drum opening and strong guitar runs kept the party going. The triple guitar attack continued to show its mettle. Both songs were off Skynyrd’s 1974 Second Helping album, the group’s second studio album and one that solidly put them on the map. There were several songs in the concert from this LP including “Sweet Home Alabama.”

Next was a poignant tribute to our armed forces called “Red White & Blue (Love it or Leave it).” Van Zant asked those who are serving, had served, or had a family member who had served to put their hands up to be recognized.

Some mighty fine finger slide lead guitar by Matejka signified the early notes of “The Ballad of Curtis Loew.” The couple sitting next to me were overjoyed as it is their favorite Skynyrd song and they were soon dancing to it. As the band performed “Don’t Ask Me No Questions,” kaleidoscope-like images of the Second Helping album turned on the screen.

A harmonica player came on stage and played the opening notes of “Tuesday’s Gone” Keys skillfully created a wonderful tinkling piano sound. With Van Zant’s and other band members beautiful vocal harmonies, the song soared. It was one of the most beautiful songs of the night. Rossington played very strong, melodic lead guitar runs on the song.

“Simple Man” with its time-honored words of wisdom from a mother: “Oh, take your time, don’t live too fast/Troubles will come and they will pass” and “Boy, don’t you worry, you’ll find yourself/Follow your heart and nothing else.” These words of wisdom were like navigational beacons of hope for many listeners when growing up, including myself.

A video played during the song showing original band members, most of whom are deceased, enjoying the simple pleasures of life, like fishing, playing cards, riding in fun cars and on horses; with family, friends, and bandmates. Part of the video montage showed Ronnie Van Zant holding his baby girl up high and proudly showing her to family and friends, and then to the camera. It was a very touching tribute which emotionally moved the audience. They responded after the song and video with loud cheers and applause.

“Gimme Three Steps” is always a crowd pleaser with a tale about a woman named Linda Lou and her angry, jealous gun-toting husband. A cover of the J.J. Cale song “Call Me the Breeze” followed. Rossington played the signature opening riffs to the song as the rest of the band accompanied.

Van Zant dedicated one of Skynyrd’s biggest hits, “Sweet Home Alabama,” to their former lead guitarist Ed King who had just died two days beforehand. The distinctive dual lead guitar riff opening reportedly happened when Ed King walked into a band session and heard Gary Rossington playing an interesting piece of lead guitar music and joined in with some notes of his own. Ronnie Van Zant heard them both playing and told them not to stop, that they had something really good. Ronnie wrote lyrics to the music and they all realized they had a special song on their hands. For the song Johnny Van Zant had a Confederate flag tied to his mic stand. In addition to the strong guitar and drums; Keys sounded great on the piano, backing vocals from The Honkettes and brass notes from the horn section contributed as well.

Lynyrd Skynyrd has one of the greatest rock songs ever in “Free Bird” and the band proudly performed it as their encore. The song was amazing as ever with the beautiful piano and inspiring vocals about being free as a bird. On the lower tempo first part of the song Gary Rossington played some incredible finger slide guitar on his Gibson SG. The up tempo change in the middle of the song takes it to a higher level of rock where Rickey Medlocke is screeching out the pulsating high notes on his Explorer and Rossington is jamming right beside him. Matejka, Keys, Cartellone, and Colt all contributed to the sensational “Free Bird” jam. During the song the band paid tribute to former members who had passed on.

Skynyrd played for approximately an hour and forty-five minutes. The KeyBank audience was mainly baby boomers who grew up with Skynyrd’s song playing all over rock radio. Many wore T-shirts from previous Skynyrd tours. There were also young adults who came for the music, and some parents even brought their kids. It was a drinking crowd, but everyone was respectful of each other.

In this reviewer’s humble opinion, Lynyrd Skynyrd is one of the best American bands ever. Their sound is built upon the solid musicianship of its members, melodic vocals, well written music and song lyrics. They can rock as hard as anyone ever has and they can also slow it down for a touching ballad. No iteration of Skynyrd will ever match the original band and its members, but this version deserves a lot of credit for carrying the music forward. They have not sat on the band’s laurels, they have produced new music in the years since they reunited. Here’s hoping that this will not be the final tour for Lynyrd Skynyrd, that they will find a way to come back after a hiatus like The Who, The Eagles, and Fleetwood Mac have done over the years.

Hank Williams Jr. put on a raucous show for all his rowdy friends. “Bocephus” played many of his top songs including: “A Country Boy Can Survive,” “Whiskey Bent and Hellbound,” “O.D.’d in Denver,” and “All My Rowdy Friends (Have Settled Down).” He even covered Johnny Cash’s “I Walk the Line.”

38 Special for many years had another Van Zant brother, Donnie, as an original member. Another founding member, Don Barnes, continues on guitar and lead vocals. They group played a solid set including their hits “Hold on Loosely,” “Caught Up in You,” and “Rockin’ into the Night.”

The Marshall Tucker Band was the first opener of the night and only played about a four song set. Original vocalist Doug Gray is the mainstay of the group and is surrounded by other talented musicians including Marcus James Henderson who played the signature flute parts plus keyboards, saxophone, and sang vocals. Among the songs they did play were “Fire on the Mountain” and “Can’t You See.”