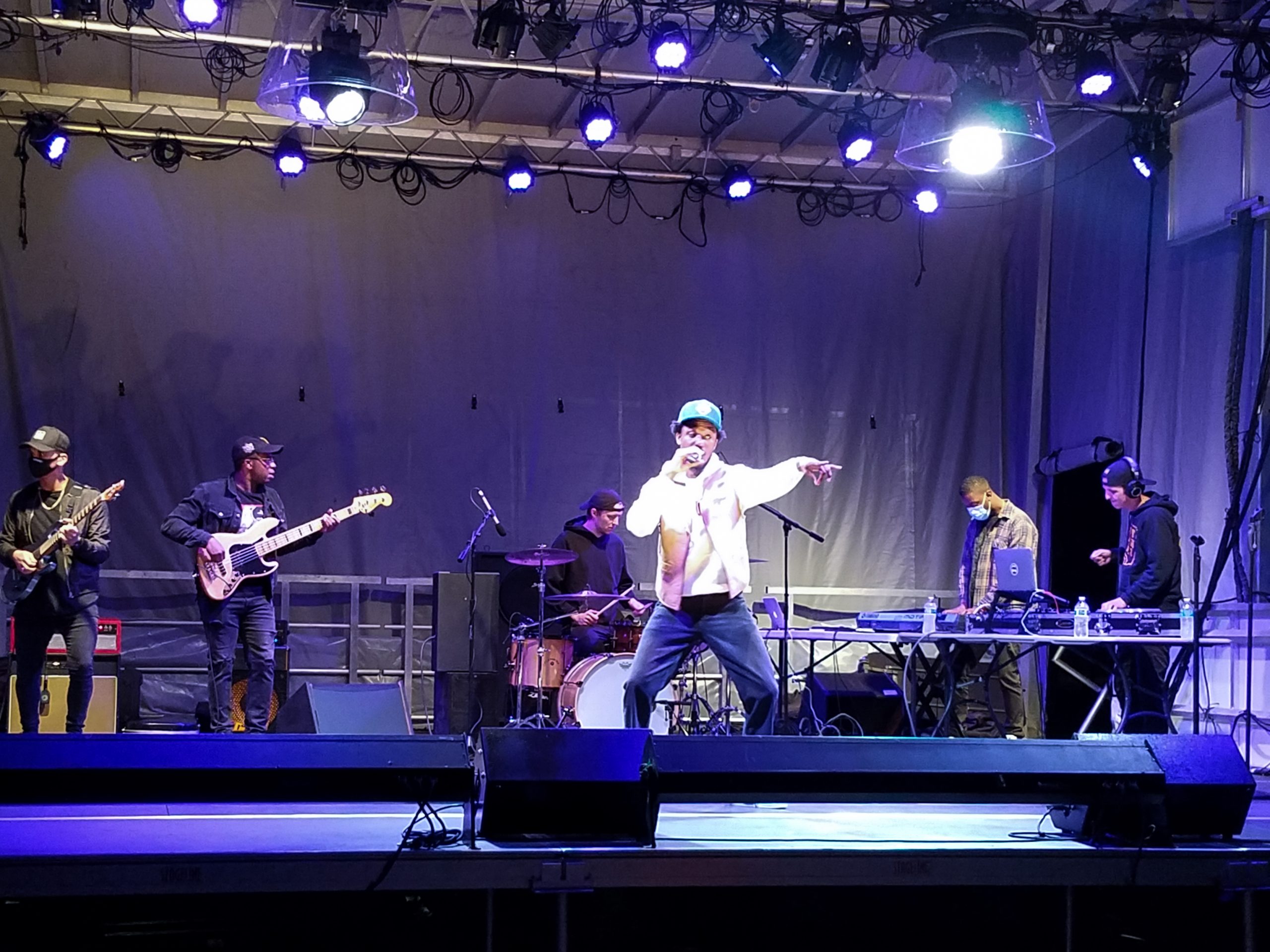 With the fallout from the coronavirus, the entertainment landscape has been looking a little barren this year. Things have perked up a bit recently with some local and national bands playing the drive-ins, museums reopening with timed visits, and casinos operating at a reduced capacity. Now City Theatre has kicked it up a notch with its brilliant Drive-in Arts Festival (through September 27) at the newly developing Hazelwood Green. And when we say arts, we’re really talking mainly about performing arts. There is entertainment and music for many tastes including contemporary dance, classical music, rock, hip hop, soul, jazz, comedy, poetry, and even some magic. 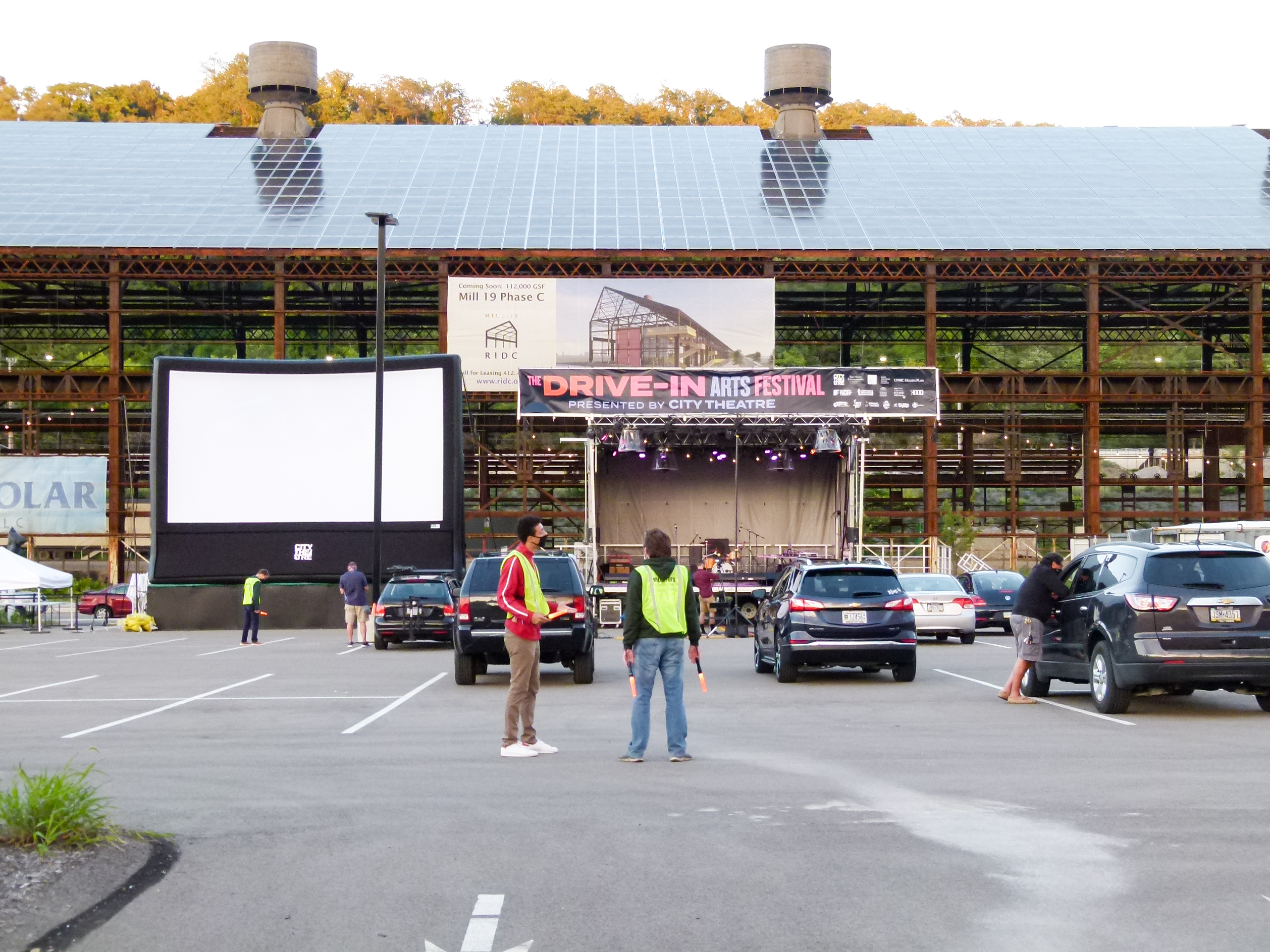 The Drive-in Arts Festival set against the backdrop of Mill 19 just as cars are starting to enter.

City Theatre didn’t have an easy task in producing this festival. Many challenges had to be overcome including logistics, health, and safety. “One of our very first steps this spring was to develop an internal Safety Committee representing every aspect of the City Theatre operation—from the public’s experience to backstage—and sought out the advice and counsel of experts from the medical field,” said James McNeel, Managing Director. “The drive-in concept quickly became the most obvious and exciting path forward as it provides a low-risk environment for the performers and for our patrons, who will be safely inside their vehicles. It’s a real testament to our team that we have found a way to perform again while also following the incredibly important health guidelines necessary to defeat this pandemic.”

When asked about how the Festival is going, City Theatre’s Marketing Director Nikki Battestilli replied, “The festival has been very successful. We’ve had very enthusiastic audiences and we’re so glad we have the opportunity to showcase Pittsburgh talent.”

I attended the Mars Jackson concert on Friday, September 18. On Jackson’s website the Hill District native is described as follows: “Touting a style that speaks to your soul, while combining Midwest/West Coast influences, he is one of the city’s most unique rhymers. The adoration Mars has for hip hop runs deep. His ear for production and love for songwriting manifests as a special connection with the hearts of his listeners.” This summer Jackson was a featured performer for Allegheny County’s “Parks Unplugged” virtual concert series.

Jackson took the stage a little past eight with DJ Spillz playing the “Mr. Rogers’ Neighborhood” TV show theme song “Won’t You Be My Neighbor,” and called out for the drive-in audience to “Beep those horns Pittsburgh!” And they did. Jackson went into his first song, “Celebration” rapping about “Boo’s up to no good in the hood” and “Making peace on the South Side.” 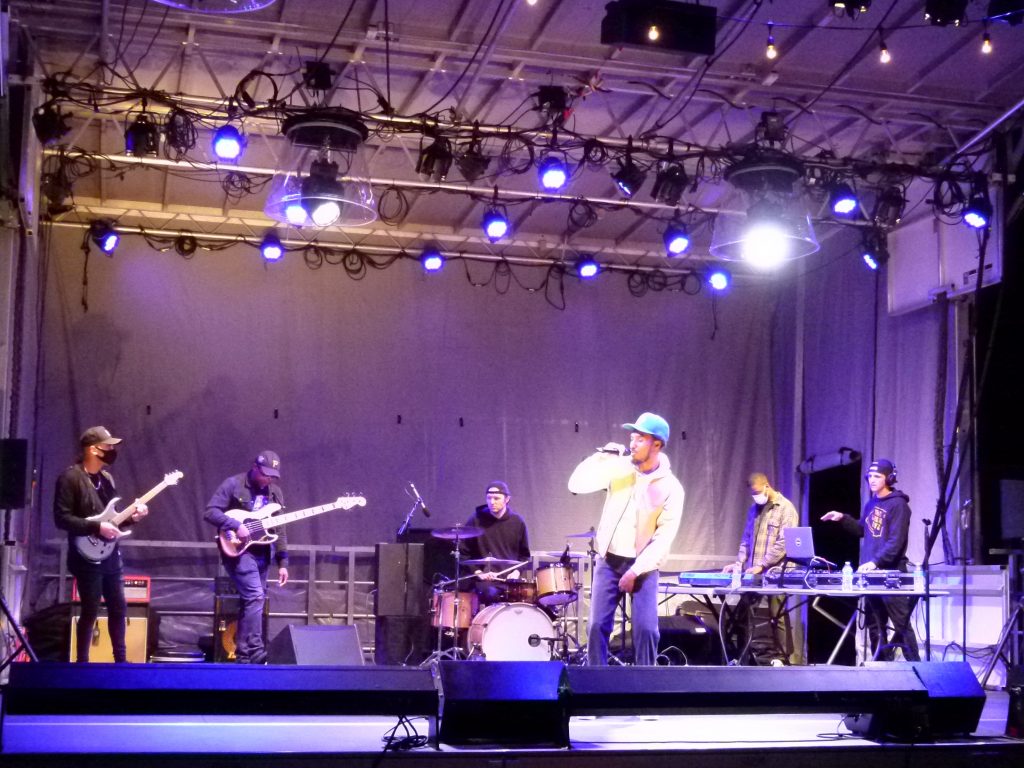 Next up was “Who You Are.” Jackson sang “Just be who you are,” and spoke about how his mother told him, “Be a leader, not a follower.” This was the first of many tributes and proclamations of gratitude that included BLM marchers, black people killed by the police and each other, dead rappers including Mac Miller, older rappers and younger rappers. He also said that since we are in Hazelwood he especially wanted to pay tribute to the Taylor Gang, Wiz Khalifa, Chevy Woods, and others. Jackson is so together and positive, except for some occasional “rapper vernacular,” that the concert felt almost like a spiritual experience. He even credited his therapist for helping him, which became a basis for one of his songs, “Look Up.” Another topic was how he loves Pittsburgh.

Other positive vibes arose when he spoke about seeing himself as a hurdler, overcoming obstacles, on the song “Standing on Oxygen” with the lyrics “Don’t let your dreams just fade away.” Jackson always wore a smile and seemed to be having big fun as he bounced around the stage singing and rapping. Jackson’s songs are very melodic, both vocally and musically. This sets him apart. He takes special pride in writing his lyrics and that was evident in the last song of the evening, “No Script.” In the song Mars proudly touts his freestyle rapping talents in regards to others. It was slightly reminiscent of Will Smith in the classic rap “Freakin’ It.” 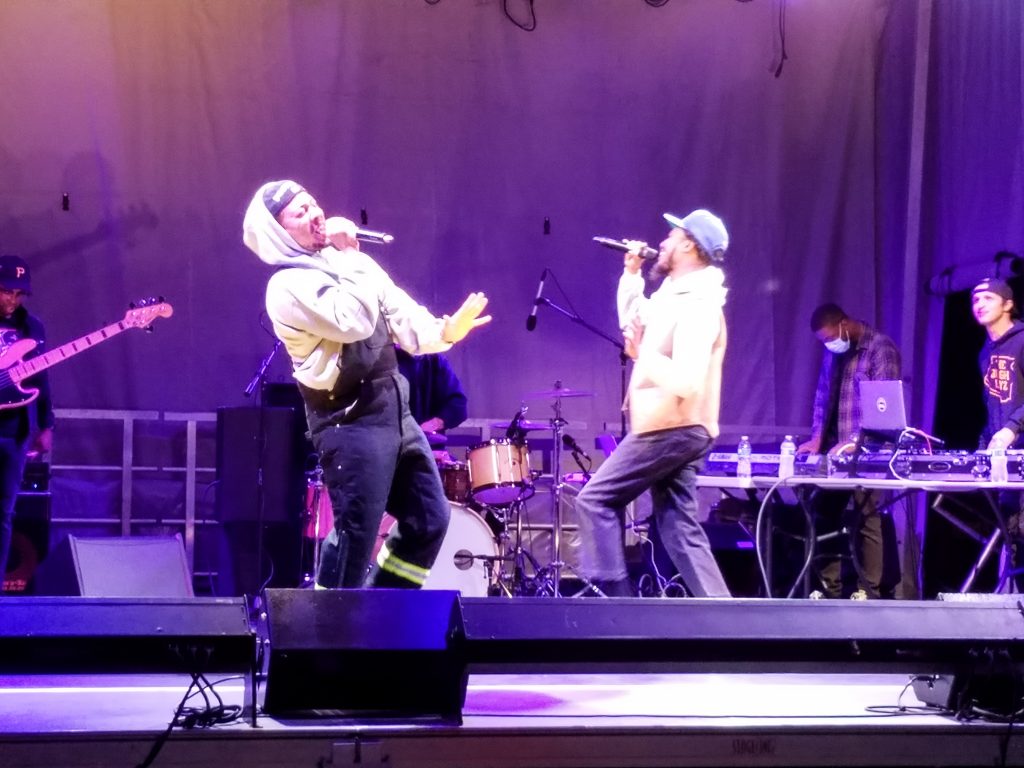 Chambers and Jackson roaming and rapping.

The first part of the concert was Jackson and DJ Spillz rocking the old mill site. Then Jackson called up New Kensington hip hop artist and good friend, Cam Chambers. That friendship was very evident when they performed “Best Friend” together. It was fun to see them both rapping together with Jackson’s full band powering the song. Chambers, who has a melodic, soulful voice, debuted his new song, a spin on FOMO (Fear of Missing Out) with JOMO (Joy of Missing Out). Lying low during the time of Covid-19 can be a joyful thing. Jackson likes to see other people shine in the spotlight too. Chambers’ solo song “Space Martini” was beautifully sung.

In other songs through the night Jackson performed “Kobe Freestyle,” and referenced Lil Yachty and “That’s So Raven” in his lyrics for “Put Some Time on It.” Another song highlight was “Heart Dance.” The end of the concert saw an enthusiastic car horn and high beam tribute to Jackson and his hip hop outfit. 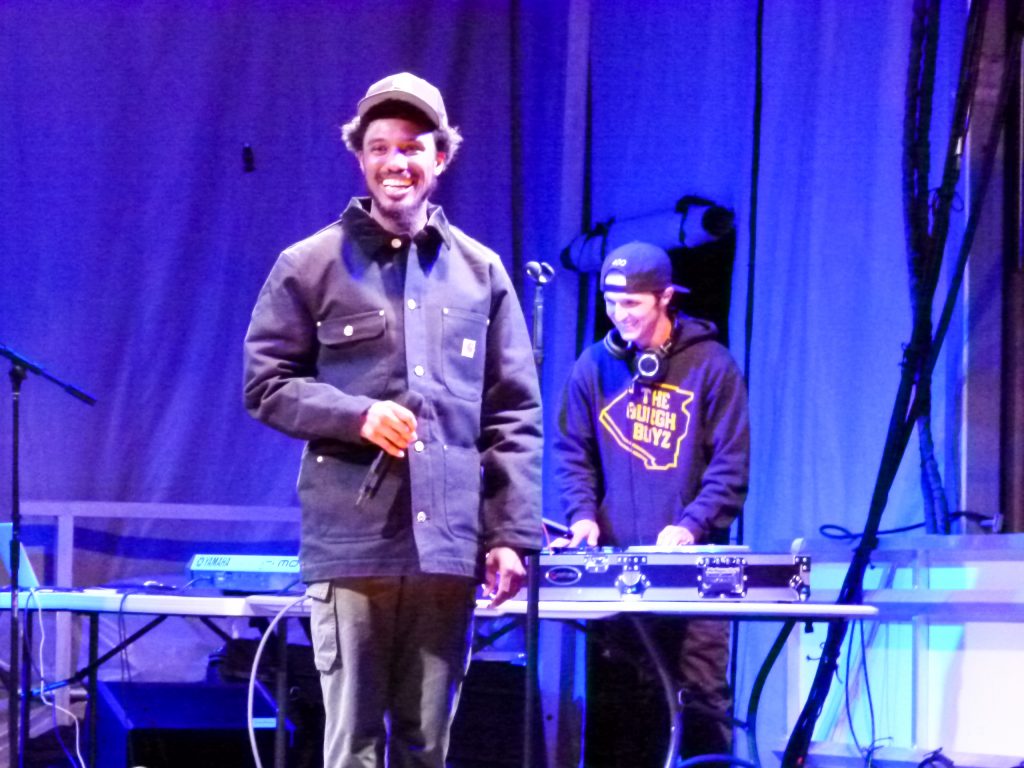 DJ Spillz and Jackson share a light moment with the audience.

When asked afterward what is was like to perform at the Drive-in Arts Festival, Jackson said, “The Drive-In Concert was something the city needed during this time and I’m glad I had the opportunity to be a part of it. Truly thankful for the City Theatre and August Wilson Center and Hazelwood [Green]. Very surreal moment when you can get people out and enjoy live music from their cars. I haven’t performed a whole set like that in months due to the pandemic, but that was everything.” 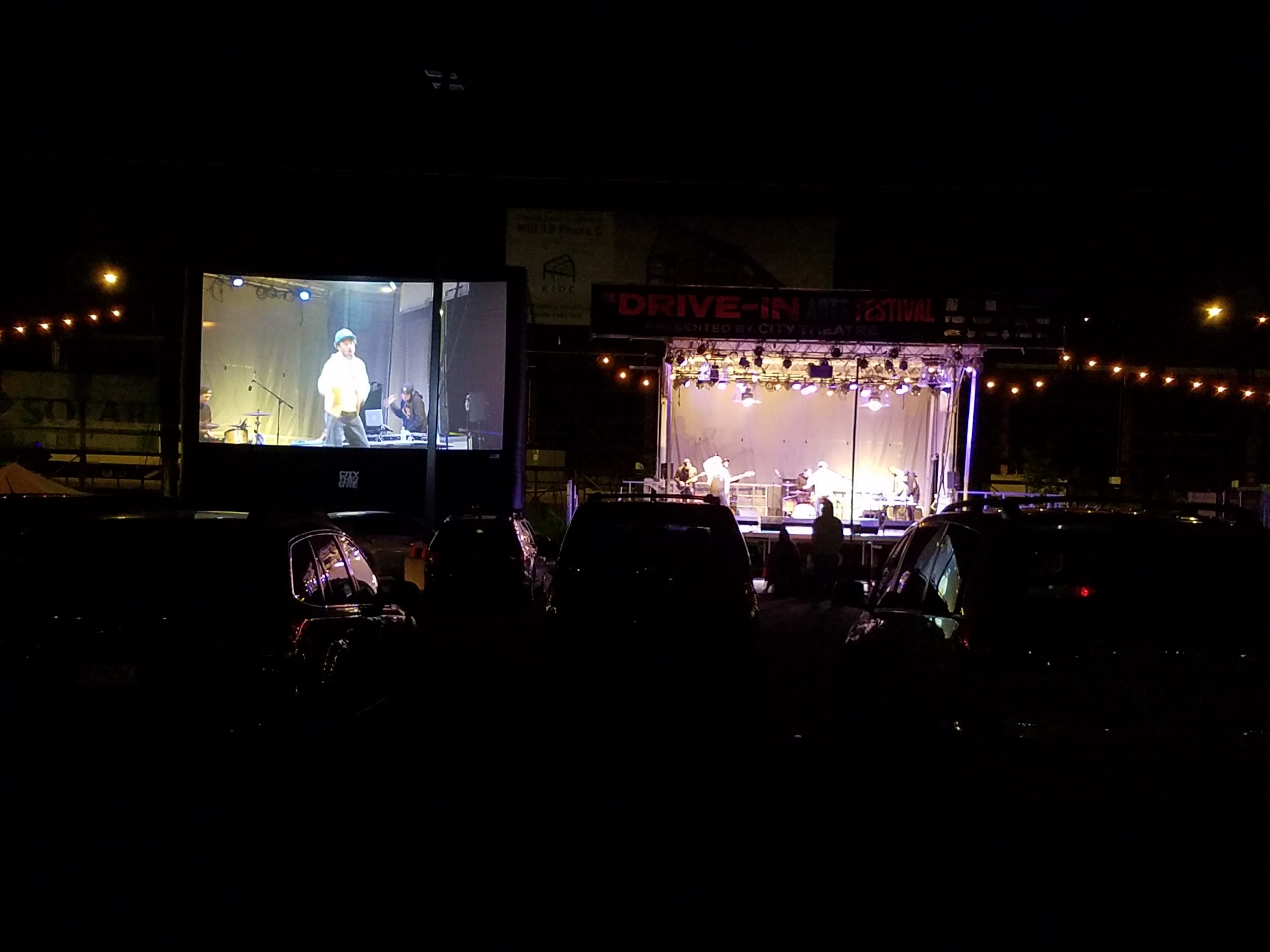 The concert in progress from behind the cars.

The festival began September 10 and continues through September 27. Tickets are sold by the car, with a maximum of 4 per car. Tickets are $25 per person, $20 for City Theatre subscribers. There is a stage for the performers with a large screen adjacent to it with a live simulcast projection of the show. Audio is received through your auto’s FM radio. People can be outside their vehicles within the parking space, but must wear a mask when doing so.