Nahko and Medicine for the People performed Sunday night in front of a large audience at the Dollar Bank Three Rivers Arts Festival at Point State Park. The group’s sound varies between quiet, introspective, and hopeful to full-out jam-rock with brass and some hip hop.

The group is led by Nahko Bear, an Oregon native of Native American, Puerto Rican, and Filipino ancestries. He was adopted as a young child by a white Christian family. In much of his music, he tries to bridge cultural divides as he had to do while growing up. Nahko draws strengths from his various cultures. He sees himself as someone who through his music can inspire the citizens of the world to better respect one another and the planet. When Nahko took the stage he greeted the audience by saying hello in the phrases of several different cultures. “We are in the land [the Pittsburgh region] of its traditional caretakers the Seneca and Iroquois,” he also added. 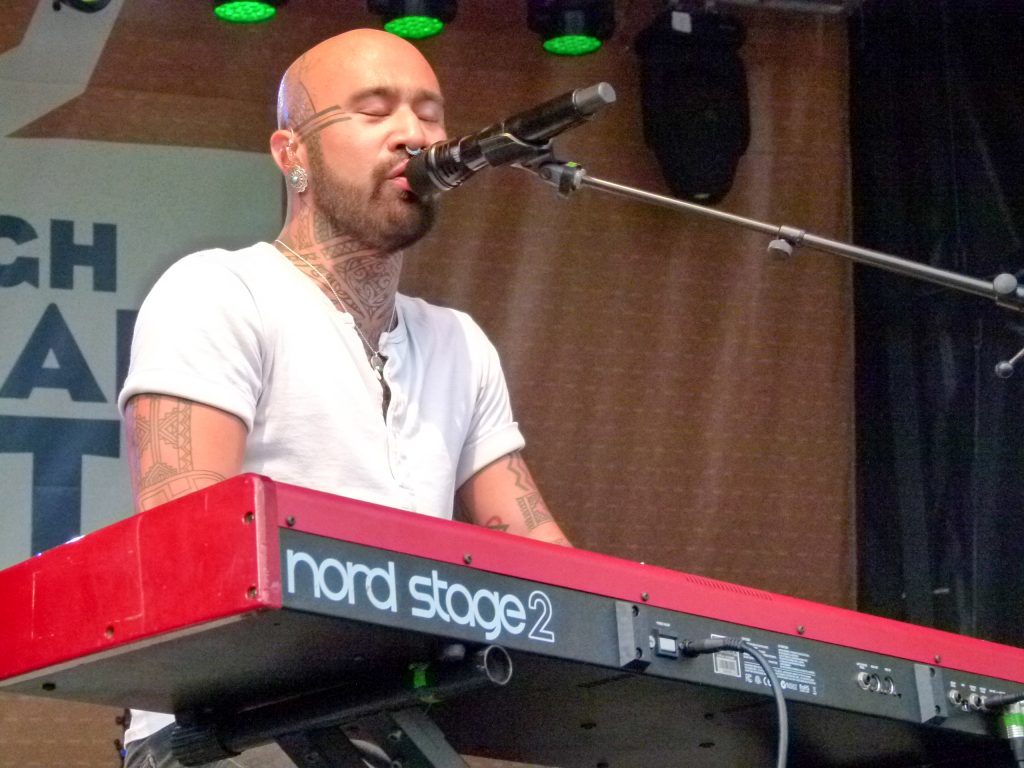 Nahko singing and playing the keys.

Nahko looks the part of a transcendent seeker of knowledge, peace, and justice. He has a shaved head and tattoos on parts of his neck, face, and arms. He also wears a small nose ring. Excelling on acoustic and electric guitars and keys, he sported the acoustic guitar for early parts of the set. The stage was simple with basic lighting. Nahko’s performance realm was mainly center stage near the front where he also had a set of keyboards. To his right was lead guitarist Chase Makai and in the back right was violinist Tim Snider. Directly behind Nahko near the rear of the stage was drummer Justin Chittams. Bass guitarist Patricio Zuñiga Labarca was to Nahko’s left and behind him were the horn players: Max Ribner on trumpet and flugelhorn and TJ Schaper on trombone. 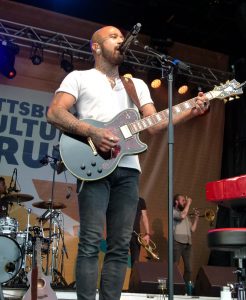 Nahko on lead guitar and singing.

A few songs into the set, Nahko asked the crowd, “How’s it feel out there everybody?” Someone shouted back, “How you feel Nahko? Nahko replied, “I feel good.” He then sat down at his keyboards, and he and the band started playing “Aloha Ke Akua.” His vocals and keyboards blended together in a pleasing melody. About halfway through the song, the tempo increased tremendously as other members of the band crashed in hard with their instruments. Nahko got up from the keyboards, strapped on his guitar, and jammed with Labarca. They both bent over backwards while performing with their instruments. The song has insightful lyrics, including “The more I understand about the human race / The less I comprehend about our purpose and place,” yet hopefully offers, “And if you wish to survive / You will find the guide inside.” 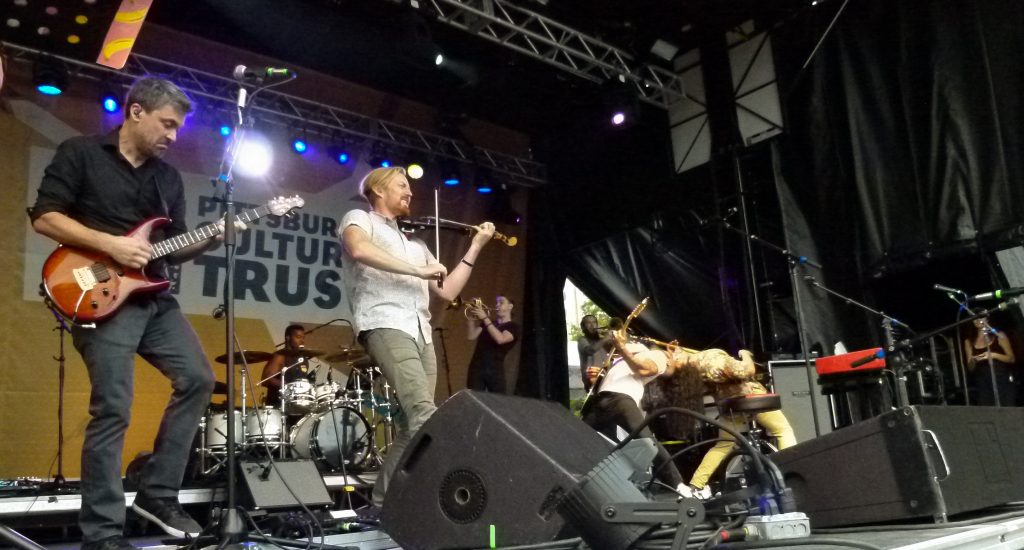 Nahko and Labarca bend over backwards in their jam together at center stage.

A Fun and Festive Audience

The crowd on the great lawn of Point State Park was a mix of hippie chicks and guys dressed in jam band clothing, some playing with hula hoops; post-Pittsburgh Pridefest men and women colorfully dressed; and an overall mix of young and old. Many of the attendees were from Nahko and Medicine for the People’s fan club—The Medicine Tribe. They seemed to know every song and enjoyed dancing to them.

During “Love Letters to God,” Nahko came to the very front of the stage and stood on top of a small speaker and sang to the crowd. The song is part top-notch pop ballad, part Hamilton-sounding hip-hop. Ribner and Schaper were at the top of their game with the beautiful horn parts on the song. It was Ribner’s birthday, and Nahko shouted out, “Happy Birthday Max!” 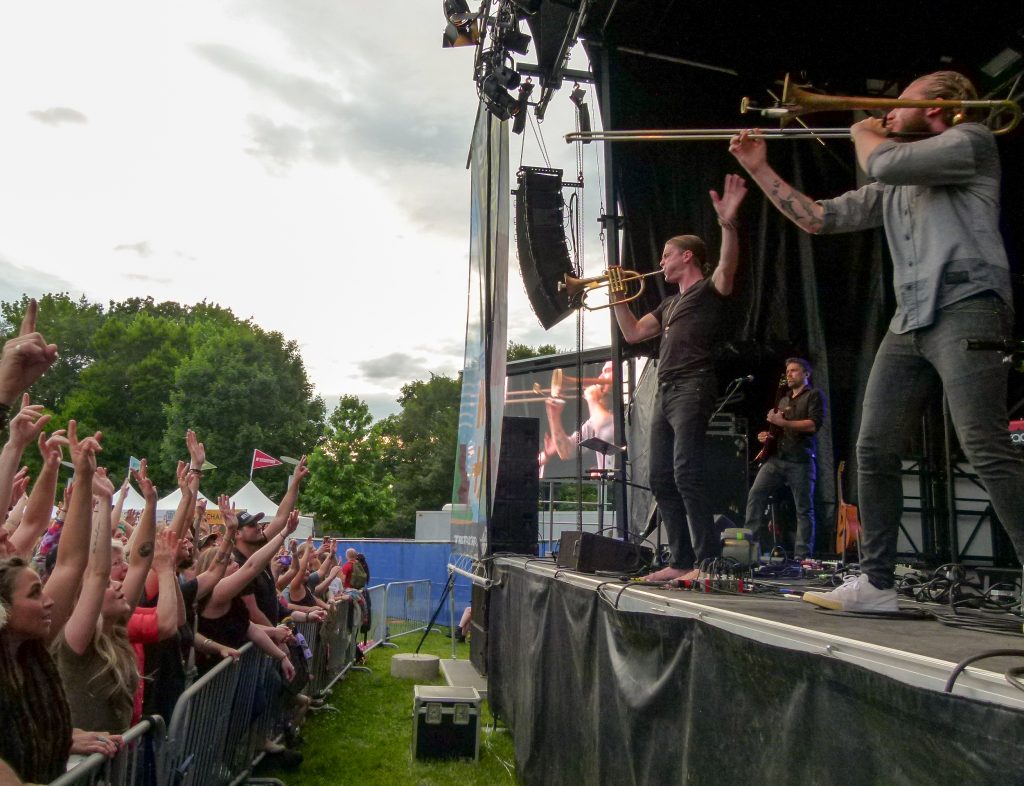 The horn section gets their time in the spotlight and the fans are loving it.

Nahko seems to be a very thoughtful person. He allows everyone to have their turn in the spotlight and a taste of the glory. And the band deserves it. They are all very accomplished players, and it showed during the concert. Guitarists Makai and Labarca and drummer Chittams provided a solid rock foundation. They then played “Dear Brother,” which saw Snider playing his electric violin like a guitar, sans bow. It was an innovative technique and moment. 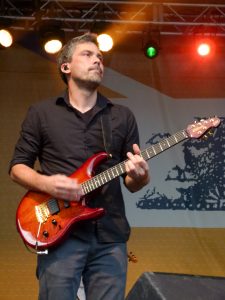 Makai on an electric guitar run.

Nahko gave a little bear growl after the song “7 Feathers” where he sings about “Coming out of our caves.” On “Budding Trees,” one of the lyrics is “visualize healing,” and there seemed to be a lot of healing going on at the concert through dance therapy. Even Nahko got caught up in it, saying, “Honestly, I can’t stop smiling, my face is hurting so much. Thank you guys for all your great vibes!” He and the band then launched into “Build a Bridge” (very appropriate since we are the city of bridges). It was a great reggae/ska-sounding song. Nahko sang it in a Marley-esque manner while the horns blared, and the drums and guitars supported. The song is either autobiographical or very similar to his upbringing. It’s about problems encountered when growing up and attempts to put aside anger and build bridges to others and encourage them to join in. After the song, Nahko and band left the stage.

Several minutes later, the band returned to the stage and played a one-song encore, “Black As Night.” The melodic rocker had heavy acoustic guitar in it. There was also some very fine violin jamming in it as well. With its refrain of “I believe in the good things comin’, comin’, comin’,” it sent everyone home on a high note to get ready for their Monday morning. Nahko closed the 90-minute concert by saying, “Mahalo, take care of one another.” Nahko and Medicine for the People‘s latest album is My Name is Bear.