A large reciprocal energy generating machine went into operation for a few hours in Lawrenceville Tuesday night. The energy was initially generated by the electro-pop, funk band St. Lucia. The group sent a continuous, positively charged energy wave of various highly pleasurable vocals and musical instrument sounds out into the ether of the Thunderbird Cafe and Music Hall where it activated human life forms to clap, dance, and smile. The St. Lucia power machine then absorbed the people’s positive energy flowing back which created a self-sustaining positive energy loop that was powered for over 90 minutes.

The music was so moving that the opening act Caroline Kingsbury, and her bandmates Chloe Arnow and Julianna Zachariou were having big fun dancing near their merchandise table. And why not, St. Lucia, which consists of the husband and wife duo of Jean-Philip Grobler and Patti Beranek, are not only highly talented, but also very warm and gracious performers with many audience call outs and interactions. Grobler even went into the crowd at one point while singing.

Grobler recalled playing at a big church here in Pittsburgh several years ago, but couldn’t quite remember the name of it, so he asked the audience for help. They responded back with Altar Bar and Mr. Smalls. I think it was finally determined that he had played Mr. Smalls. He also spoke of them taking their kids for a walk to a nearby park today (probably Arsenal Park) and enjoying the beautiful weather. Grobler even gave a shout out to the coffee shop across the street.

The evening saw Grobler playing a variety of instruments including lead guitar, synthesizers, and percussion and drums. His clear, steady vocals gave positive power to the songs. That should be no surprise since he sang in the noted Drakensberg Boys’ Choir while growing up in his native South Africa. Beranek, a native of Germany, is talented as well, contributing vocals, keyboards, and percussion to the group effort. She also possesses some very skillful dance moves.

St. Lucia’s latest studio album, Utopia, was released on October 7 on Nettwerk Records and the set list featured several of its tracks. Most notably was their featured single “Touch.” Other songs from Utopia included “)(,” “Separate World,” “Another Lifetime,” “Rocket on My Feet,” “Gimme the Night,” and “Take Me Away.”

Another big crowd favorite was the first song of the encore, “Take Me Away” which St. Lucia performed live for the first time. It’s a smooth, seamless dance pop song with the lyrics, “If we could fall up / I might have to admit that it’s all been a bit rough / But it’s alright tonight /The goddess and the devil in the house of light” and “Tell me all your secrets.” The crowd was loving it. Grobler said that, “This was one of the best Tuesday nights ever.” Most in the audience would probably agree with that sentiment too. 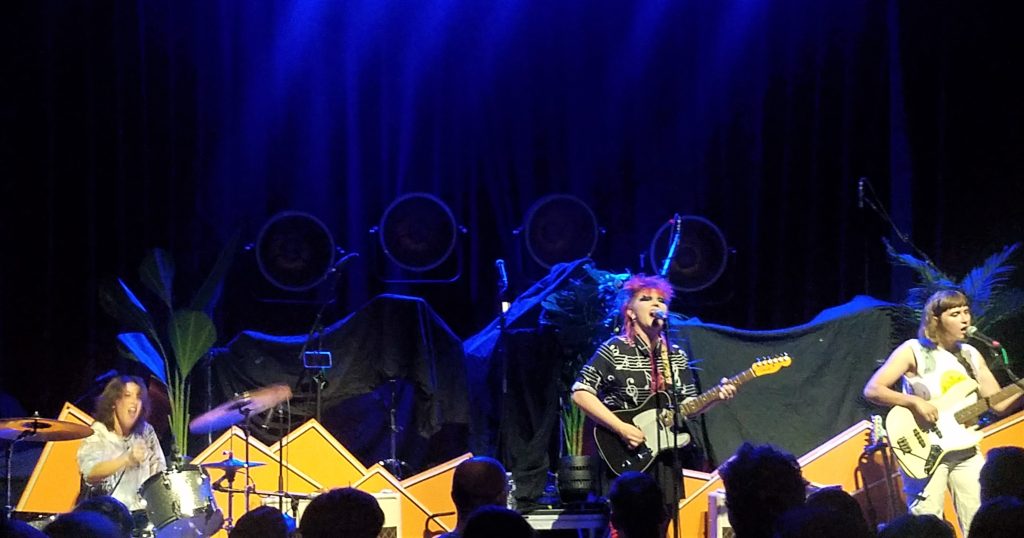 Caroline Kingsbury and band did a smashing job as an opener for St. Lucia. Kingsbury was dressed like a cross between a glam rocker and a star child with silver knee high boots and star shaped makeup around each eye. Her music was highly compatible with St. Lucia’s. She told the crowd that this was the last night of her opening for St. Lucia and that she had a great time on tour with them. Kingsbury also mentioned that her parents and other relatives were in the audience for the show. Her latest album is 2021’s Heaven’s Just a Flight.

Story and photos by Rick Handler.