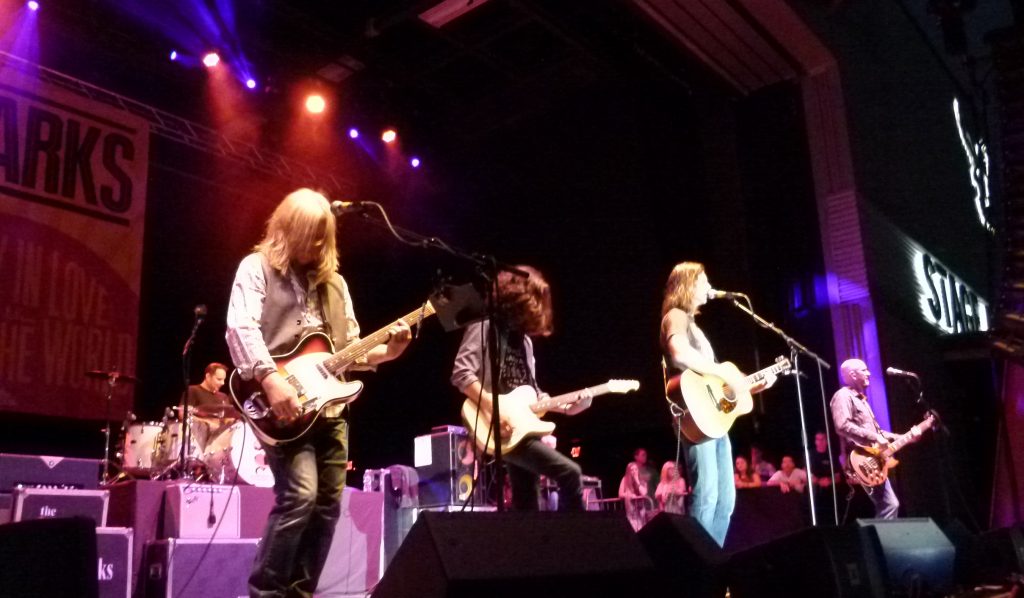 The Clarks performing for a packed house in an outdoor show at Stage AE. (L to R): David Minarik, Rob James, Noah Minarik (playing with the group for several songs), Scott Blasey, and Greg Joseph.

Pittsburgh rock band The Clarks played their annual big summer show at Stage AE. And oh, what a magical night it was. The weather was glorious, and many fans packed the venue. In addition to The Clarks, there was a very special opening band, SVEN. WDVE’s beloved afternoon-drive DJ Sean McDowell was the MC for the evening’s festivities.

This year is the 30th anniversary of the release of The Clarks’ 1988 debut album I’ll Tell You What Man… . To honor that auspicious occasion, rock musician/producer Rod Schwartz assembled a band of Pittsburgh all-star musicians (SVEN) to pay tribute to the album. All tracks were played. The band’s roster included Joe Grushecky, Johnny Grushecky, Paul Luc, Jon Belan, Bill Deasy, Jay Wiley, Kelsey Friday, and others. They all did a great job of performing The Clarks’ songs. 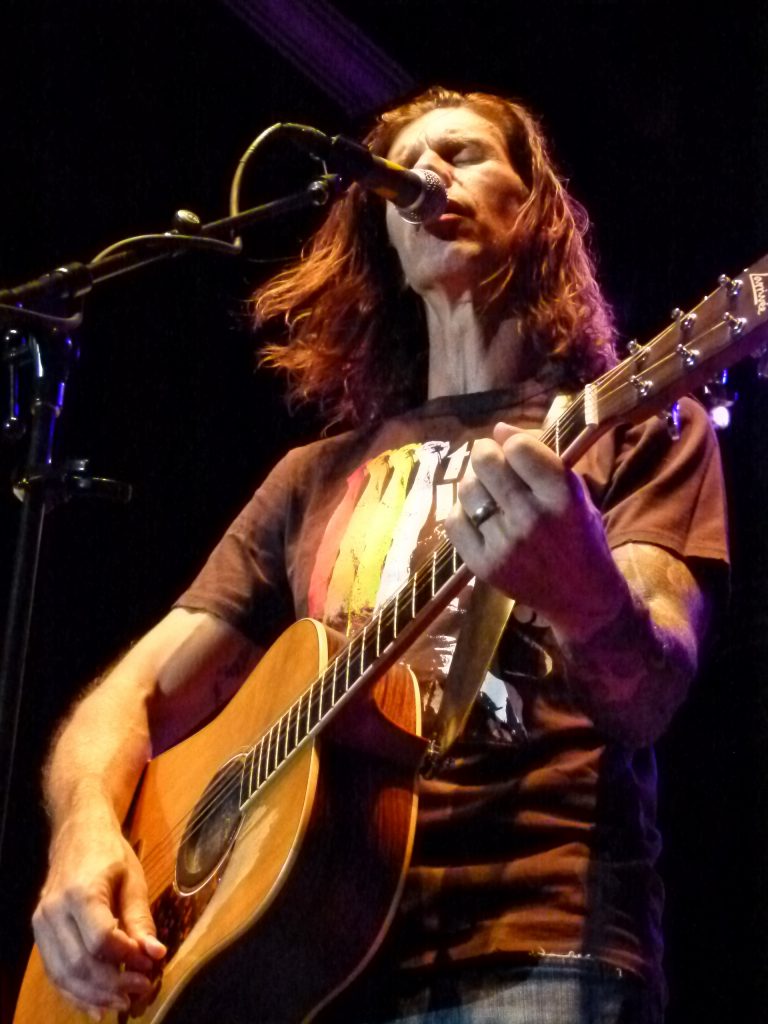 After a brief intermission, it was time for the main event. The Clarks took the stage among loud cheers and applause from the audience. They launched into one of their top rockers “Caroline.” After the second song, The Clarks’ lead singer/guitar player Scott Blasey asked the crowd, “How ya doing? This is a new one, ‘She’s on Fire.’” Some fine pedal steel play by Gary Jacob and steady drumming by David Minarik opened the song. Then the rest of the band started in. Lead guitarist Rob James had some great riffs. Blasey sang, and the band joined in on melodic vocals. The song sounded great with the interplay of James’s lead guitar and Jacob’s pedal steel.

The band released its latest album, Madly in Love at the End of the World, on June 8. The Stage AE concert was its release party. The album builds on their signature guitar rock sound by incorporating more pedal steel and Hammond organ sound on certain songs, giving some interesting flourishes and a bigger sound. It demonstrates the evolution of the band to more complex arrangements while staying true to its established musical foundation. Both Scott Blasey and bassist Greg Joseph wrote the songs for the new album. It’s great that after 30 years and 11 studio albums, The Clarks aren’t resting on their laurels, but are exploring new musical horizons.

“Witness to a Crime” is another new one they played soon thereafter. It had a rollicking beat, and the pedal steel was very prominent, almost like a second lead guitar. James sounded good as well. “Summer Setting Sun” was another interesting new tune about taking troubles as they come. Pedal steel was prominent on this song as well and played well with the rest of the band’s instrumental mix. 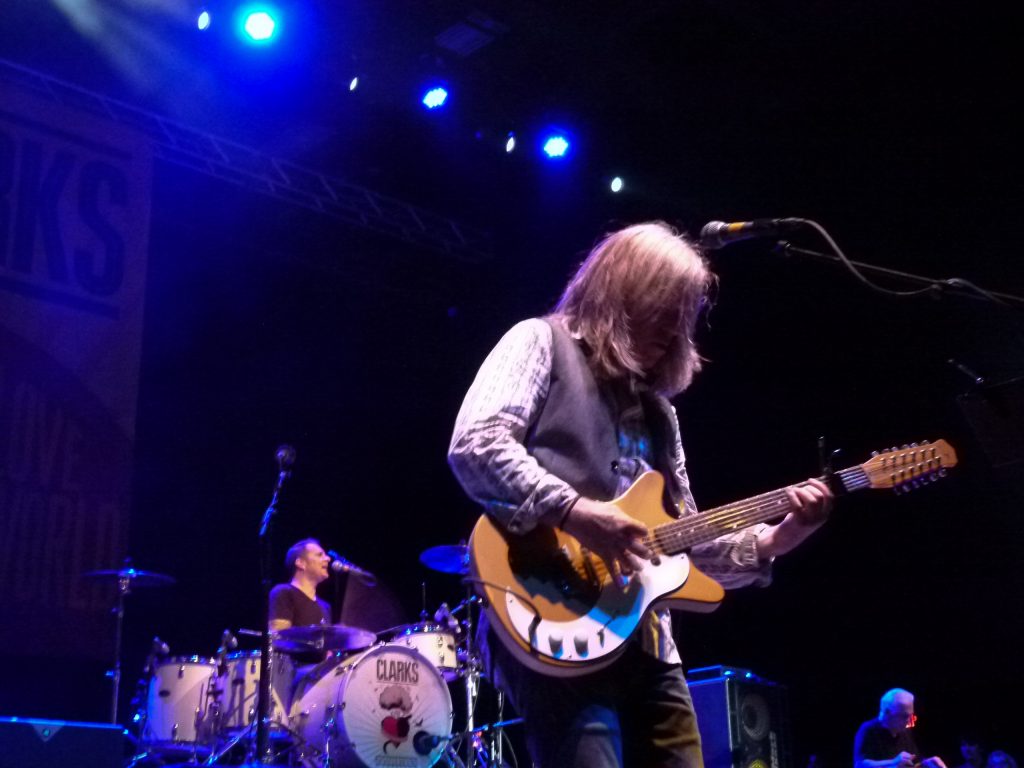 The Clarks Get a Little Help From Their Friends

Before “Roses,” also from their latest LP, Blasey told the audience, “In 1993, Rick Witkowski [Pittsburgh producer/guitarist] told me about this group called Brownie Mary. We started playing shows with them and their beautiful and talented lead singer, Kelsey Friday. She’s going to join us tonight on ‘Roses.’”

Friday and Blasey sang a beautiful duet together with the band backing, and the stage colored with soft red lighting. There’s an interesting refrain on the song “Roses:” “Roses never make the scars go away/Roses never make/Sorry always buys one more day/One more day.” The song has an alt-country/Texas-outlaw-country sound to it. 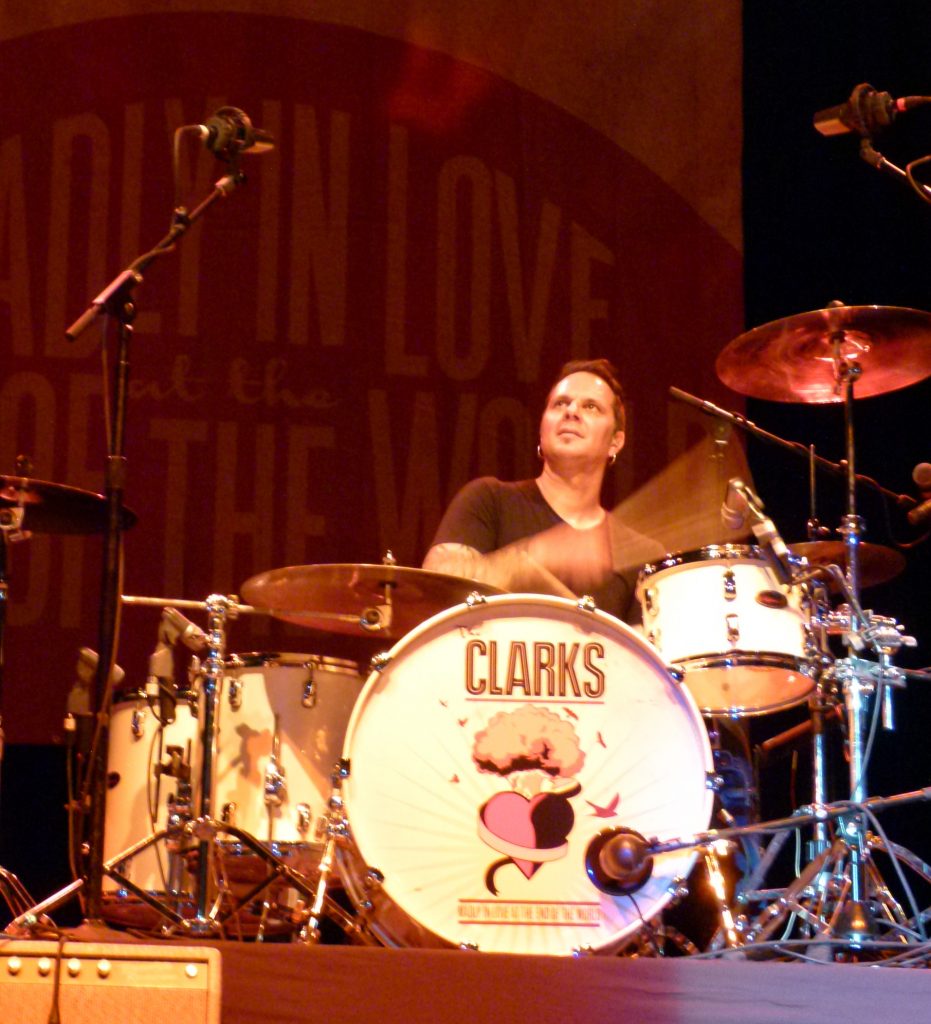 Next was another new song. “The Longest One Night Stand” is a fun rocker with great guitars and drums. After the song, Blasey said, “Over the 30 years since I’ll Tell You What Man… came out, we’ve made many new friends including Bill Deasy.” Deasy came on stage, and the band started playing “Penny on the Floor.” Deasy and Blasey each sang lead vocal parts. Another great moment was seeing Rob James play a mandolin with his lead guitar still strapped on below it. It was exciting to watch James play amazing lead guitar runs on his various guitars during the concert.

The Clarks had additional guitarists on songs throughout the night, including drummer David Minarik’s talented son, Noah, who played lead alongside James on many songs. Jacob and keyboardist Skip Sanders played guitar on a few songs as well. Sanders and Jacob are very skilled on organ/keyboards and pedal steel guitar, respectively. (A Korg CX-3 is used by the Sanders to replicate the sound of the much bigger Hammond organ). 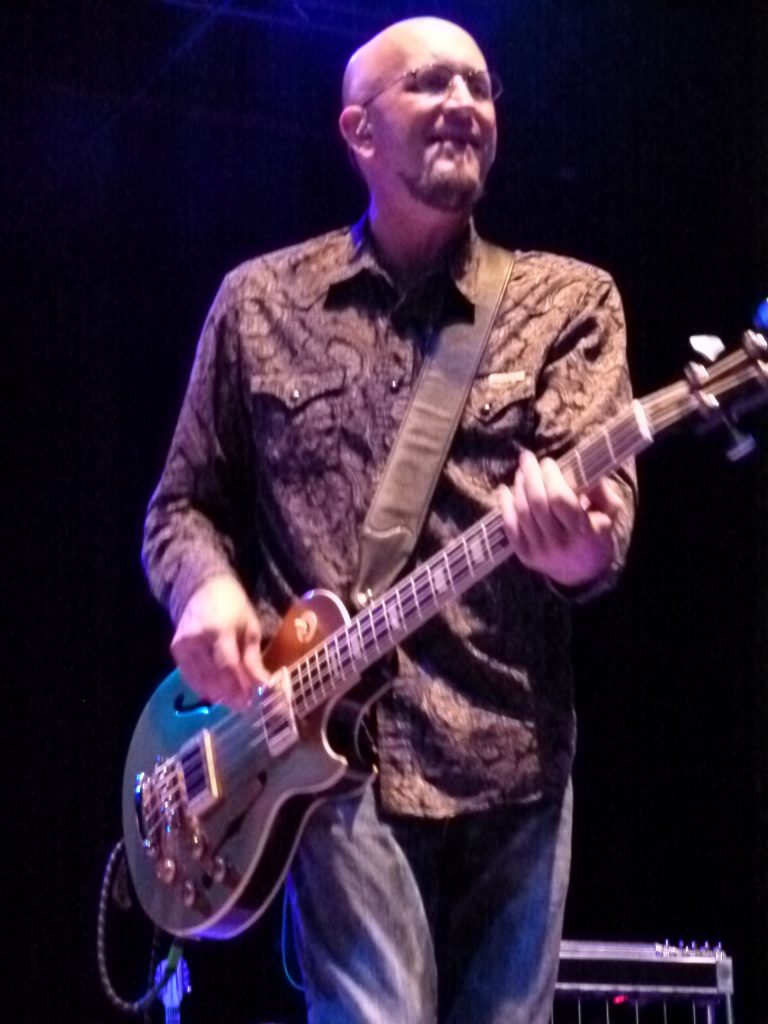 Greg Joseph gives the band a strong and steady bass line to rock on.

The new tune “What Do You Do” followed, with Dave Minarik sounding great on harmonies in the song. His drum play, as always, was inspired. He wore a big smile throughout the night as he pounded the skins and also when he looked over at Noah playing lead guitar. Joseph gave the band a steady line to build on and had a cool bass-player stage dance/walk going on during some of the songs. He, James, and David Minarik sounded great on the backing harmonies and some lead work. Blasey’s voice was as crystalline clear as ever, he’s also very adept at playing the acoustic guitar.

“Keep Your Eyes on the Road” opened with a wondrous Hammond organ sound intro from Sanders. The rest of the band then came in heavy with pedal steel, lead guitar, bass, and drums and then settled back to a slow simmer, like a modern country/blues song.

As Blasey and band lit into “Cigarette,” the crowd got fired up. Blasey had some fun interplay with the audience as he leaned out over the stage to engage with them more, and the band even played a part of “Tainted Love” in the song. 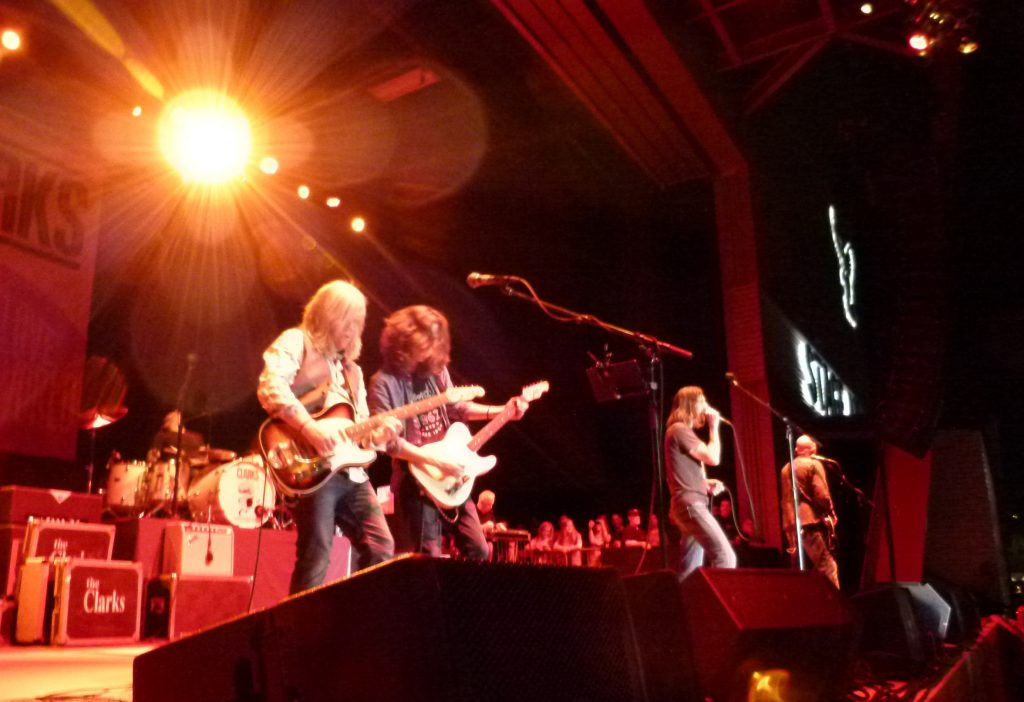 A spotlight “sunflower” effect shines down on the band as they play.

“I lost my dad five years ago, and I’m doing this song for him,” Blasey told the audience as he led the band into the poignant song “Irene.” It was a touching ballad about a woman in various stages of her life who then dies at a fairly young age, with Blasey singing, “She’s waving goodbye to 33 from a long, black limousine.”

The Clarks and Fans Having a Blast

The party got started again quickly with the band’s popular rocker “Maybe” and “Love Is What You Need,” which featured some very pleasing acoustic guitar work from Blasey. This was followed by “On Saturday,” another top hit, and the new song “In Blood,” a fast rocker.

“Shimmy Low” was followed by another big Clarks song “Better Off Without You.” The latter is a power blast of a song with Blasey’s strong vocals, the band’s backing vocals, James’s blazing guitar work, Joseph’s rock bass line, and Minarik’s fast rhythmic drumming. The band waved and left the stage, signaling the end of the first set. The audience rewarded them with loud cheers and applause. 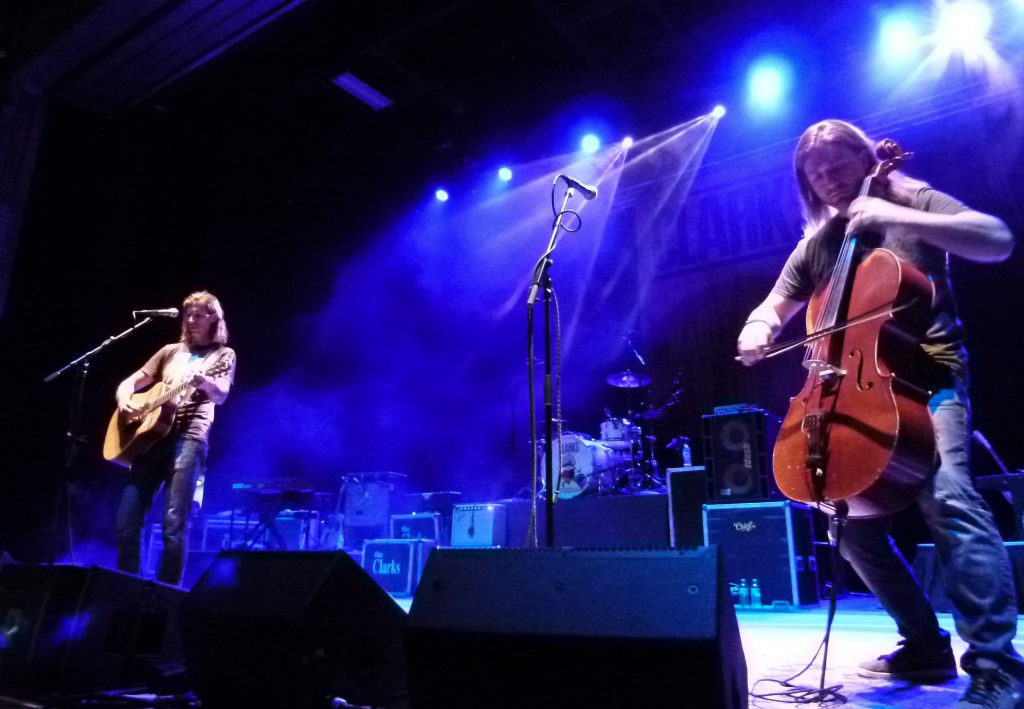 Blasey and Simon Cummings of Cello Fury perform ‘Madly in Love at the End of the World.’

Blasey returned to the stage a few minutes later sans the rest of the band and brought out Simon Cummings of Cello Fury to play the cello parts of the title track from Madly in Love at the End of the World. The beautiful duet between Blasey and Cummings put the audience in a peaceful, tranquil mood with some even swaying slowly in their own cool moment.

Cummings exited as the rest of The Clarks returned to the stage. Blasey said, “I’m touched by all the musicians that gave up their night to come and perform our songs earlier. Pittsburgh is a special place. We’ve been playing here for 32 years, and we want to thank everyone from the bottom of our hearts.” He was in a state of gratitude at other points of the show too, thanking parents, wives, family, and fans for their support throughout the years. 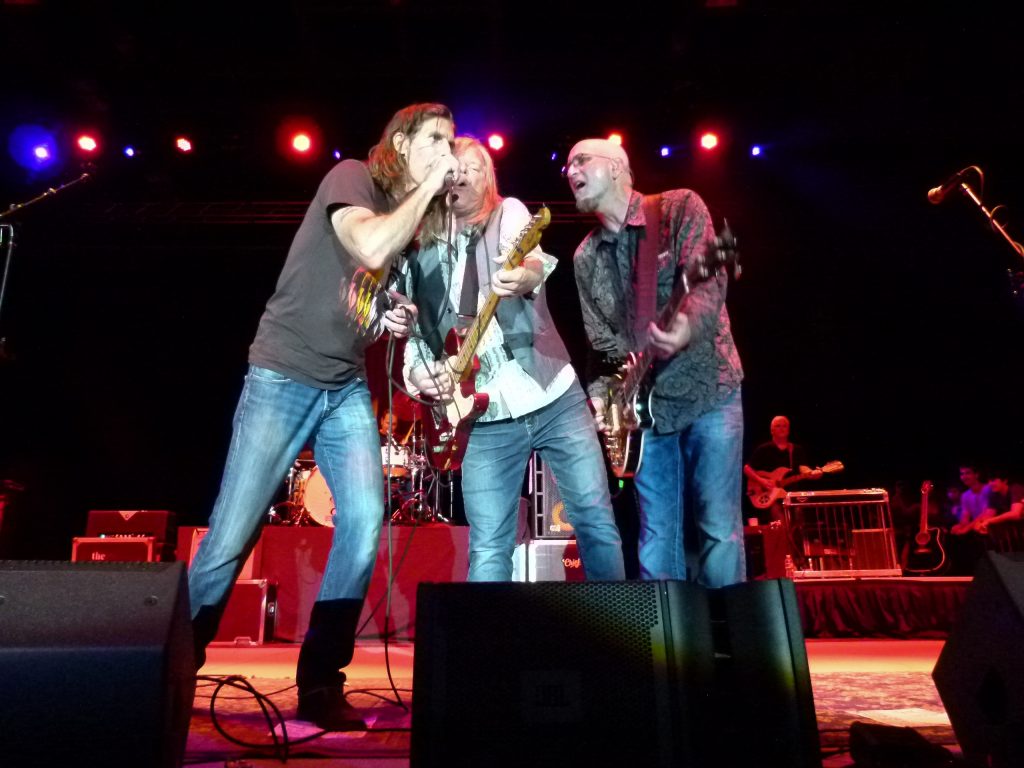 The Clarks are still creating beautiful harmonies after 30 years together.

That The Clarks are such humble and appreciative people is one of the reasons for their success. It also helps that they write quality songs that express their curiosity for the world, along with their frustrations and exaltations. The Clarks can lay down some hard rock with the best of them and also create simpler, beautiful songs to kick back with. Their harmonies are seamless and top-notch.

They then performed another fan favorite “Born Too Late” with James employing a 12-string electric guitar on the song. The Clarks ended the encore with “Take Care of You.” They played for almost two hours. It was a great night on the North Shore for The Clarks, their fans, and Pittsburgh music.