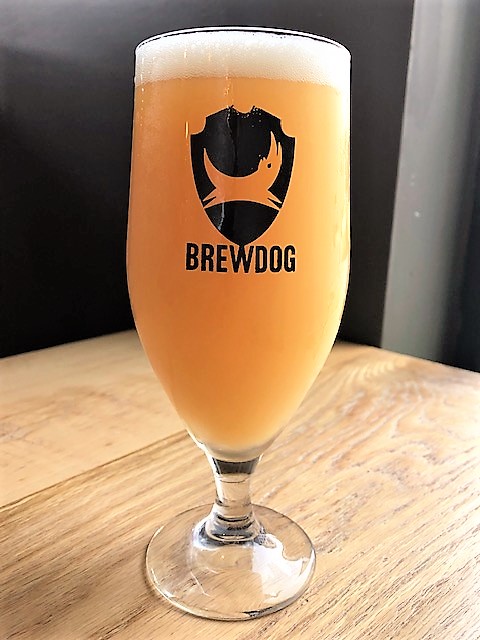 A crest of a cartoon pup with its head held high jumps over the word “Brewdog” in all caps on a glass of radiant Ladybird: Pink Boots IPA.

I had planned to patronize the then newly opened BrewDog Pittsburgh Outpost on Monday, March 16, 2020—the day that dine-in at restaurants and bars halted in multiple Pennsylvania counties, including Allegheny. The rest of Pennsylvania followed on Tuesday. Sixteen months and two vaccine doses later, I paid my overdue visit.

It wasn’t my first BrewDog experience. The craft brewery, which was founded in Scotland in 2007, distributes widely and franchises pubs worldwide. I like its Elvis Juice IPA, and I enjoy visiting its Franklinton, Columbus, Ohio location. Columbus also has the DogHouse and Brewery. Billed as “the first craft beer hotel” with select dog-friendly rooms, it’s on my bucket list of places to stay someday.

The Pittsburgh outpost opened February 28, 2020 only to close temporarily March 16. It reopened for take-out in May 2020 and then for limited dine-in in June. It completely closed again December 12, 2020 due to the pandemic and new restrictions, but it began seating customers once more beginning March 12, 2021. 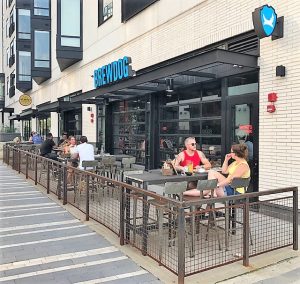 Patrons enjoy patio seating, which is also open for dogs.

My girlfriend and I visited recently for its two-for-one (stylized “2-4-1”) Vegetarian Mondays. We sat indoors at one of the pub tables, and we each ordered a vegan Beyond Meat burger for the price of one ($15). (The sweet potato burger and the buffalo cauliflower burger were our other choices.) Monday is also trivia night, which runs from 7 to 9 p.m. (Editorial disclosure: I work for Pittsburgh Bar Trivia, with whom BrewDog contracts, and occasionally guest host.)

While we waited for our dishes, we split a flight of four small pours. The Punk IPA (5.2% ABV) is BrewDog’s flagship beer, and with its lush tropical notes, it sipped particularly well during our summertime visit. The Jet Black Heart (6% ABV) was a full-bodied nitro stout with oatmeal notes. 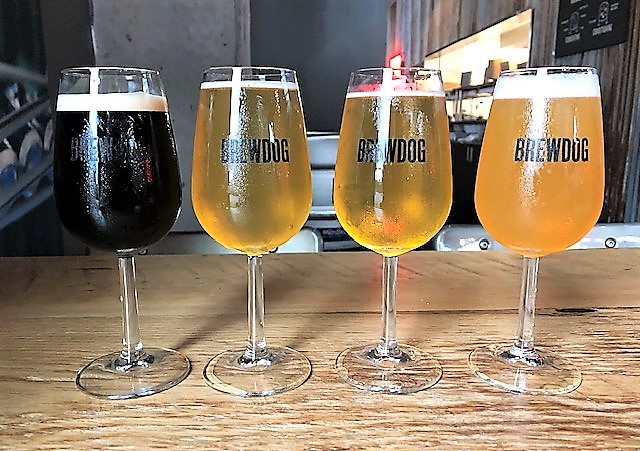 Each BrewDog outpost brews beer unique to its location. Roberto Clementine (6.5% ABV) honored the late right fielder for the Pirates with a clever name and a keen citrus flavor. The Yinzer Pale Ale (4.12% ABV, a reference to the city’s area code) was a crisp, hoppy IPA. We also ordered a full-pour of the Ladybird: Pink Boots IPA (8% ABV), which tasted hazy and sweet. The full pour was $6.50; the small pours averaged $2.50 each. Also available: cans, growlers to go, guest drafts, liquor and cocktails, coffee, and merchandise, such as shirts. 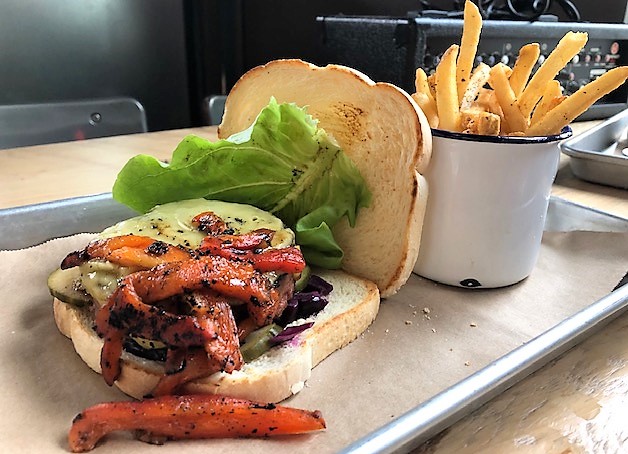 The Beyond Meat burger looks (and tastes) like the real thing with vegan slaw, gouda, and toasted brioche bun from Klosterman Bakery plus vegetable toppings. Fries on the side in a mug.

Our food soon arrived. The BrewDog kitchen had prepared the burgers to complement their toppings well. Vegan chipotle slaw gave a sweet and tangy balance to the roasted red peppers, and the patty and vegan gouda tasted like the real deal. Bibb lettuce, house pickles, and the toasted vegan brioche bun from Cincinnati’s historic Klosterman Bakery added crunchiness. Our crispy fries were salted and peppered evenly.

Other available sides and snacks included mac ‘n’ cheese, Mexican street corn, and a giant soft pretzel. Meat sandwiches also dotted the menu, from burgers to chicken sandwiches. There were sections for salads, tacos, and buffalo and cauliflower wings as well as a kids menu and a dessert menu. Food was farm to table.

Service was attentive to the patrons, who packed the house for trivia and leaned toward thirty in age. Cleanliness was exceptional with frequent wipe-downs of the tables and bar. And parking was ample with meters on the street and a garage nearby. 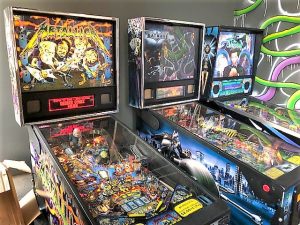 “We’re getting busier and busier as things go on,” Nike Midgley, general manager, said regarding the waning pandemic. “There’s been a lot of things that people might not think of that we were prevented from doing. For instance, our pinball machines.”

I forgot bar games were prohibited because of concern over communal surfaces. But the three machines—Metallica, Batman, and the Shadow—are again hungry for quarters.

“It’s little things like that that really build up to make our business more complete,” Midgley said. He added that bar hours will extend very soon as well.

I spied some board games too on my way out. Fun, food, beer, and a welcoming establishment, which was also dog friendly. All that was missing was lost time, nothing that a few more visits won’t make up for. 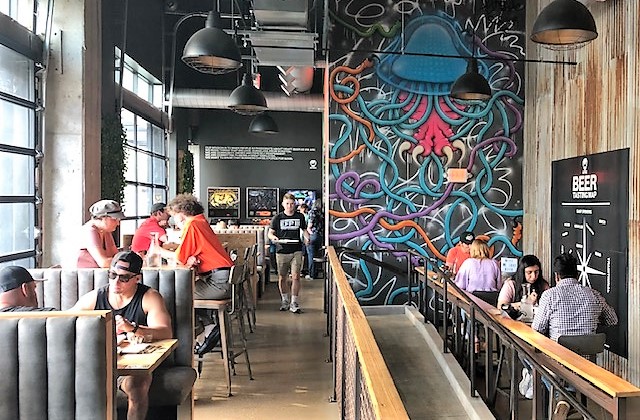 Colorful artwork surrounds customers, who sit in booths and at pub tables.

Story and photos by Christopher Maggio.