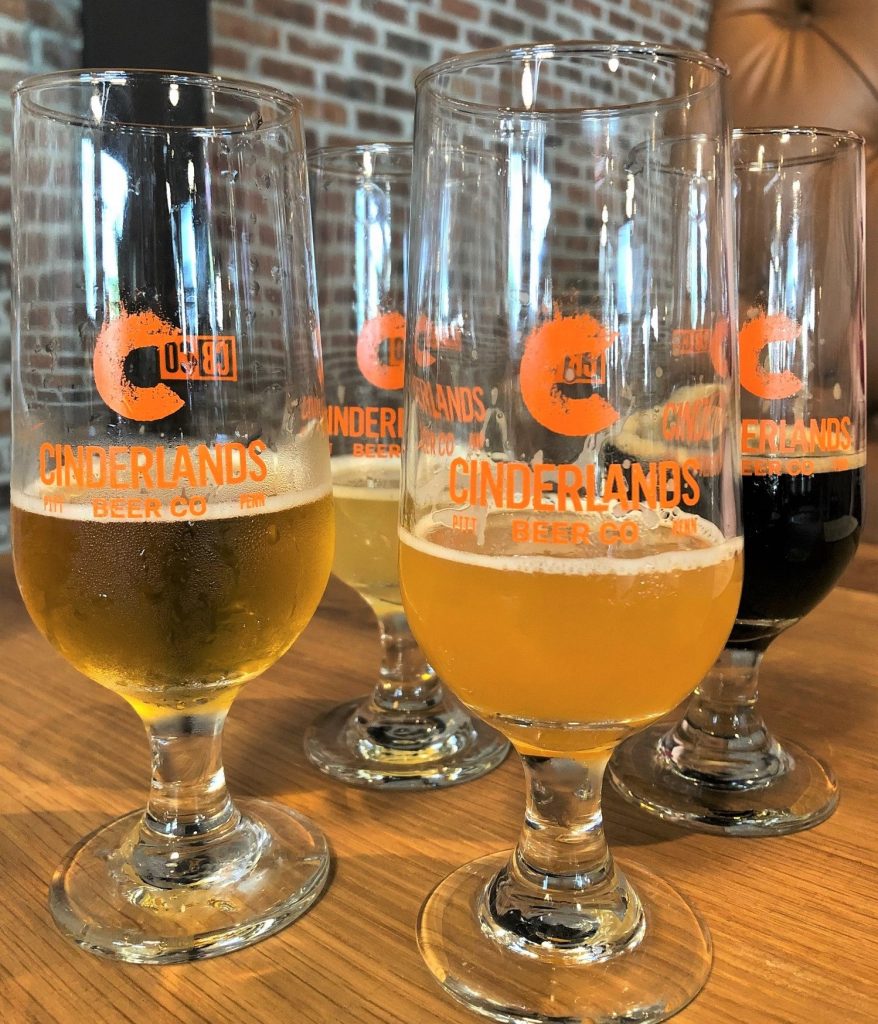 Twice I have been to Cinderlands 3705 in Lawrenceville. I enjoyed its original beer and adventurous scratch-item menu. It’s where I ate my first soft-shell crab, and it’s one of the only places in Pittsburgh where my girlfriend can order a good Scotch egg. What I’ve heard through friends since going there is that the Cinderlands’ staff is exceptional at pairing food with beer, and I looked forward to seeing if this was true at the recently opened Cinderlands Warehouse in the Strip District.

In Search of the Perfect Pairing

My girlfriend and I arrived at 6 p.m. on Wednesday. Cinderlands Warehouse opened Tuesday, May 7, 2019 in the old Spaghetti Warehouse on Smallman Street. The interior looked completely remodeled, and it reflected a sparse industrial aesthetic. Although it was early, both the first and second floor were half full, and the evening got busier. 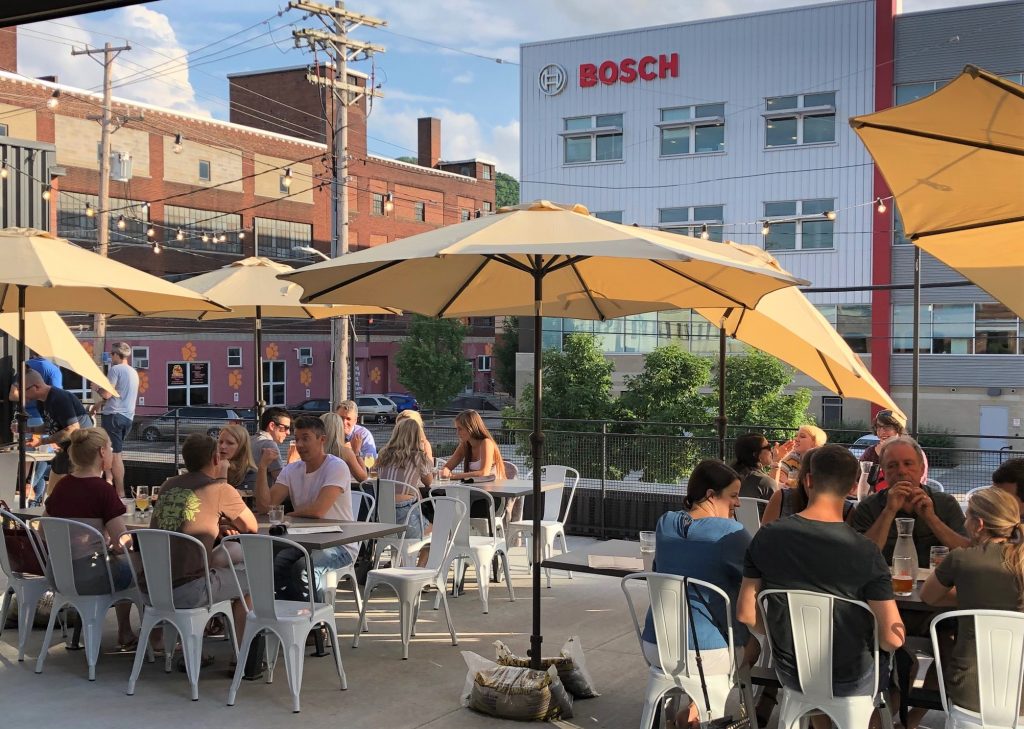 We both ordered a sandwich. Feeling adventurous, I got the banh mi, which was made with fried pig ear, lemon ginger chili, pickles, pâté cilantro, mint, and French bread. Not to be outdone, she got the crunch wrap, made with beef cheeks, Fritos, queso, pickled red onion, and iceberg lettuce in a tortilla.

We asked our server, Lydia, which beers paired well with them. Without hesitation, she said the Tracks Again Unfiltered Pilsner (5.2% abv) and the Range of Light Double IPA (8.4%) for the banh mi. When I asked why, she said the sandwich had a more subtle flavor, and these beers were more flavorful.

For the crunch wrap, it was the opposite, she explained. The wrap was more flavorful, so subtle beers, like the Grizzled Canary Grisette (5.6%), paired better. My girlfriend also ordered the Bougie Pajamas Tea Brown Ale (6%) simply because she wanted to try it. We got 4-oz. pours of each beer.

Lydia was right. The fruity Range of Light gave a nice counterbalance to the slight sweetness of the chili in the banh mi. The Tracks Again wasn’t quite flavorful enough, but it happened to pair well with the spicy crunch wrap, more so than the Grizzled Canary even. The Grizzled Canary tasted sour and then bready, which was good on its own. The Bougie Pajamas tasted dark, light, and sweet. Our sandwiches were delicious, and the portions were generous. Both came with fries and ketchup. 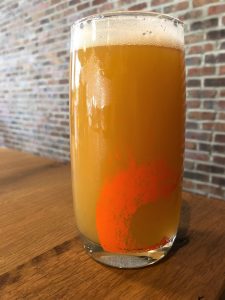 The service was excellent too. Lydia checked on us multiple times. We had our own pitcher of water, and she occasionally stopped to refill our glasses. She brought out the beers promptly and then our food. The silverware and our table were spotless.

We skipped dessert, but items such as the key lime pie and strawberry cheesecake, both $9, sounded great. Instead, we split a full pour of the hazy-bodied Doug IPA (6.8%). It began fruity and finished dry.

Cinderlands’ beer are divided into six categories: dad beer, hop-driven, farmhouse, stout, tea and coffee, and out there. Dad beers are brewed to appeal to everyone, the joke being even your dad, who drinks only Bud, will like them. Indeed, the Tracks Again imparted the familiar, bitter taste of Yuengling.

Farmhouse beers are Belgian in nature and include saisons and grisettes. Out there beers are more experimental, such as the Major Tom Collins Tartshake Double IPA (9.7%), an interpretation of the Tom Collins cocktail with an homage to David Bowie’s “Space Oddity.” Every beer listing details the ingredients, including the different hops, and what sized glass it is served in. 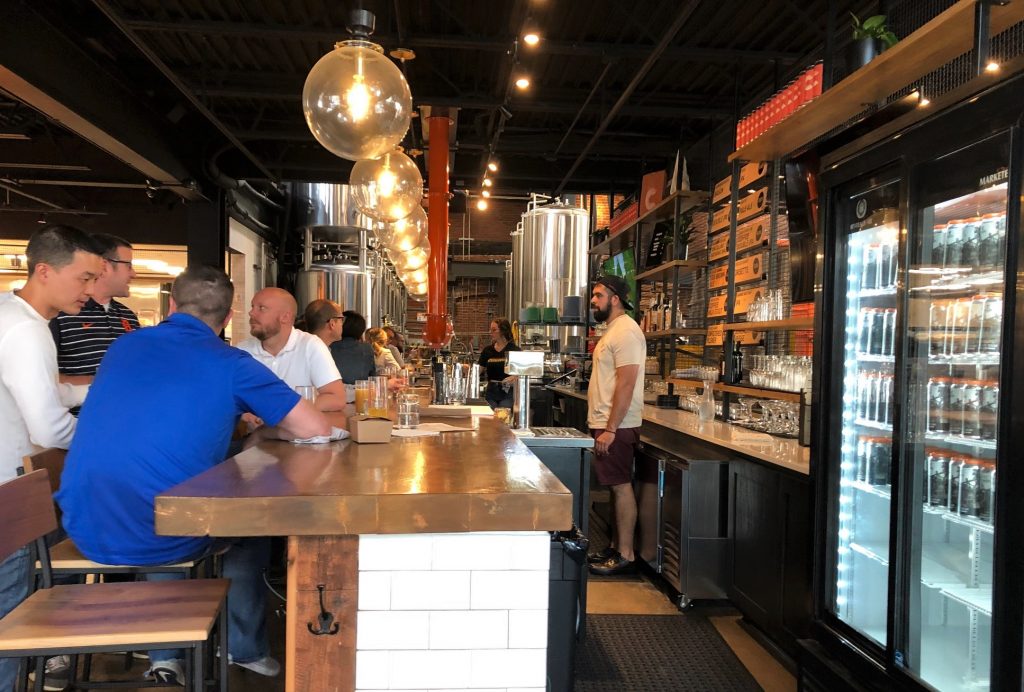 Friends enjoying a cold one at Cinderlands bar. Notice the brewing tanks in the back.

There’s crowlers and cans to go. Patrons can bring their own 64-oz. growler provided that it is clean and they limit themselves to two fills per day. Paul Schneider is the head brewer.

A regular pour beer is $6, an 8-oz. taster is $4.50, and a 4-oz. taster is $2.50. Cinderlands also sells cocktails, wines, and ciders. Cocktails go for $10 to $12. Ciders and wines can go as low as $11 for a glass of Arsenal Cider (another Lawrenceville-based business) or as high as $60 for a bottle of wine. Non-alcoholic drinks include pop and, for the kids, apple juice and chocolate milk.

Cinderlands offers entrées, like beer can chicken and brisket, that run the gamut from $19 to $28. It sells salads and other vegetables, all priced between $10 and $16. The sandwiches, or “helds” as the menu calls them, are $14. Joe Kiefer is the executive chef. 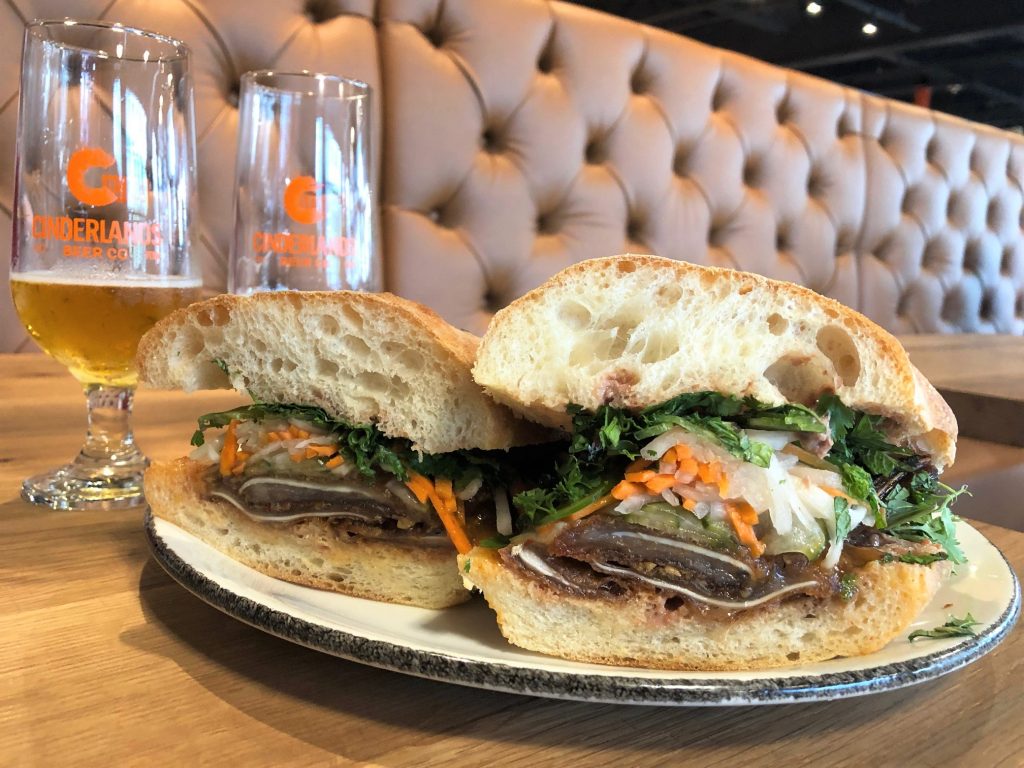 The banh mi is one of several helds (sandwiches).

However, lunch has its own menu: out are the entrées, in are some extra helds. The snacks and veggies also differ slightly. All menus change often, so check Cinderlands’ website. The pub additionally sells shirts, hats, and beer glasses, and different rooms are available for private events.

I made a reservation a day earlier with OpenTable, which was easy to use, and it emailed and texted me reminders. Parking was next door at the Hub at 3 Crossings parking garage, and it was validated up to two hours, which was plenty of time to eat, drink, and chat among ourselves and the staff. 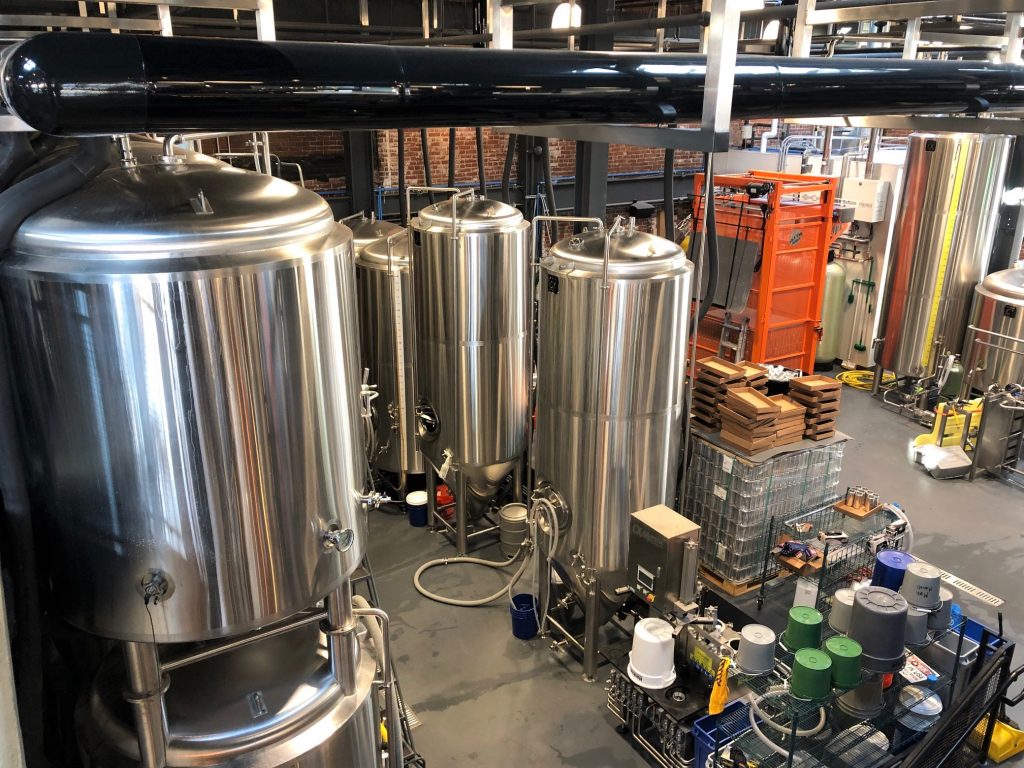 The brothers Jamie and Steve Warden own Cinderlands. “It’s a nod to the city of Pittsburgh and the history of the steel industry here,” Jamie Warden said of the name. During the industry’s heyday, ash and soot blanketed the city. According to their website, Cinderlands 3705 acts as an “incubator” for new brews and food while Cinderlands Warehouse acts as the “destination for familiar brews and classic dishes.” Each location’s beer is brewed at its respective location.

As for what’s new, Cinderlands 3705 will soon have four oak foeders (pronounced “fooders”), which are fermentation vessels, to age French-Belgian-style saisons. At Cinderlands Warehouse, the oak program will be geared around big ales, like stouts and barley wine.

“Our guests seem to be happy with the product we’re putting out,” Warden said of the new location. “We generally attract a very welcoming, hospitable crowd.”

Cinderlands is quickly becoming a go-to place for my girlfriend and me. The only debate now is choosing which location to return to next.