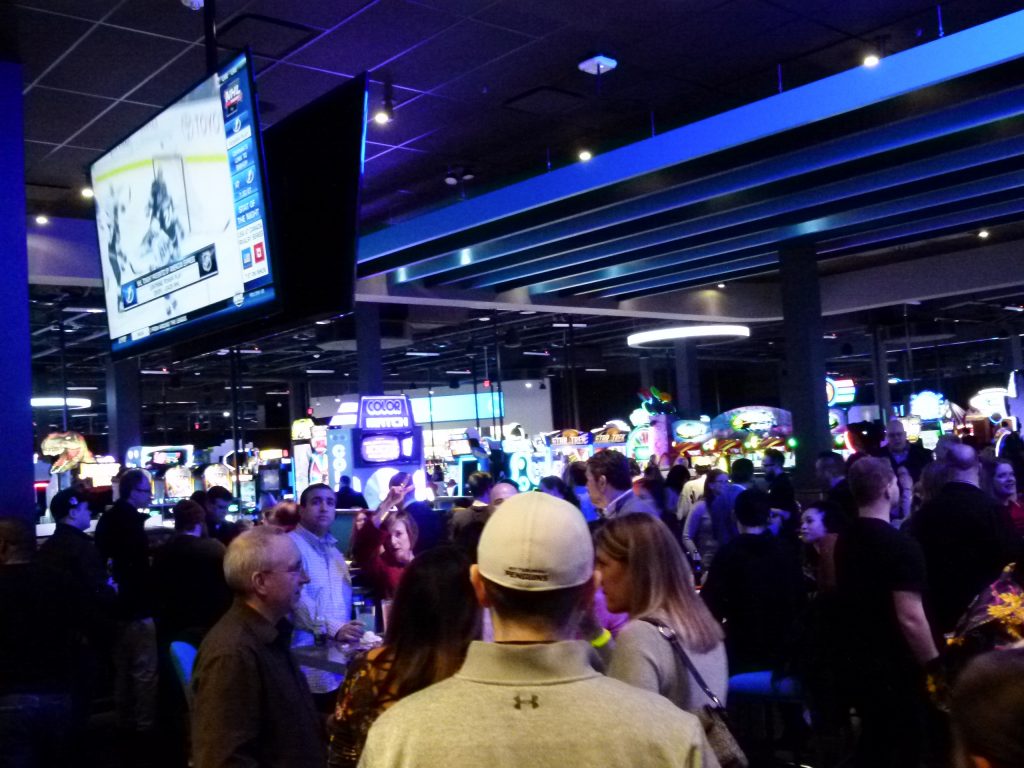 Any boredom in the North Hills will be banished—or at least greatly reduced—with the opening of a Dave & Buster’s in The Block Northway on February 18. Thursday night Dave & Buster’s hosted a preview party for invited guests at their restaurant/bar/arcade on McKnight Road. The entertainment complex is the second in Pittsburgh for the chain and is 40,000 square feet in size. The party was very well attended and guests enjoyed a buffet of delicious offerings from the chefs at Dave & Buster’s. Selections included tossed and Caesar salads, appetizers, meatballs, sliders, BBQ, grilled chicken and shrimp. The staff also passed hors d’oeuvres. A sumptuous dessert table included a nice selection of éclairs, mini-cheesecakes, cookies, and brownies.

In the center of the restaurant is a double-sided rectangular bar with a wall of TVs in the middle facing outward to each side of the room. With over 40 HDTVs of various sizes, It’s almost impossible to miss any plays from the televised sports games shown. Dave & Buster’s is known for its unique cocktails including: Adult Snow Cones, Strawberry Watermelon Margarita (with strawberry flavored ice cubes), and Glow Cones (with a blinking, flashing glow cube) and Dangerous Waters Island Punch. All of the staff were attentive and friendly.

With more than 155 arcade games there’s something for everyone. From the new multiplayer virtual reality platform of DragonFrost™ and Jurassic World VR Expedition™ to NASCAR racing simulators, shooting games, and one of the biggest crane claw stuffed animal games around.