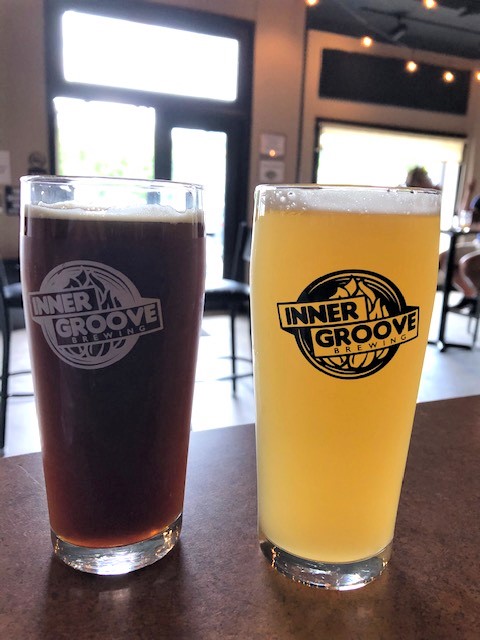 It was with much eagerness that my girlfriend and I visited Inner Groove Brewing, our first taproom excursion in three months, and one which we hoped would be fun yet safe.

We arrived Sunday afternoon, just over a week after Allegheny County moved to the green phase and the day after Inner Groove celebrated its one-year anniversary. Tape sectioned off the floor around each table, and all of the tables were spaced at least six feet apart. Our server, Kaitlin Cliber, wore a mask, as did the rest of the staff. 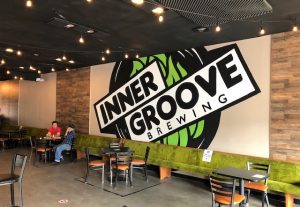 Patrons can take a load (and their masks) off at their socially distanced tables.

Once Cliber sat us safely inside, we could take our own masks off. She tipped me off to the “Verona-rita.” An off-menu concoction, it was a mix of two beers. One was My Verona (5.2% ABV), a golden ale. Its name recalled both the Knack’s no. 1 hit “My Sharona” and Inner Groove’s neighborhood, the idyllic suburb of Verona. The other beer was Straw Hat (4.7% ABV), a sour. The mix took the edge off the sour, leaving an initial crisp, ale taste followed by an aftertaste of strawberry and lime.

My girlfriend ordered the Ephemeral Style (6.3% ABV). It seems like every brewery is making hazy IPAs these days, but this one stood out for its vanilla notes. Round two was Celebrity Hot Tub (5.8% ABV), a brown ale with caramel notes, and Keds and Tube Socks (5.5% ABV), a smooth American pale wheat beer.

Inner Groove celebrates not only beer but also vinyl, but the record player wasn’t spinning while we were there. Instead, Alexa played some chill yacht rock. As we listened and imbibed, we talked to Kelly Melle. She and her husband, Tim Melle, and Jen Walzer and her husband, Kevin Walzer, co-own the brewery.

She said the initial stay-at-home order, in which breweries could operate but as take-out only, caused them to bump up can releases. “We weren’t even thinking about canning until after the first year and then, here we go, month seven, and we’re canning.”

Although canning helped them not to lose money, the taproom, she said, is “the heart and soul of what we do.” She credits the Pittsburgh chapter of the Brewers Association with helping them to decipher the new rules. “We’ve found that we’re making the same amount of money now that we were pre-COVID on the exact same nights,” she said, citing how the outdoor seating keeps the taproom busy without going over the new 50-percent indoor occupancy limit. 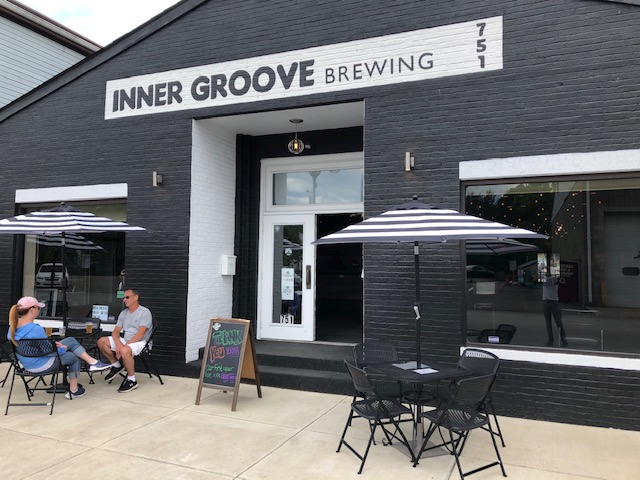 Virus or not, patrons can always enjoy outdoor seating along calm Railroad Avenue in Verona.

We ordered 12-ounce pours, which range in price from $4 to $7.50. It also sells five-ounce and 16-ounce pours and Narcisi Wines, pop, and water. Patrons and pups can sit on the back patio or front seating area too. Order 16-ounce, 4-packs of cans or 32-ounce crowlers online for pick-up. (Call when you arrive if you want curbside delivery.) A food truck is parked during operating hours; check Inner Groove’s Facebook for the weekly schedule. The owners hope to resume DJ trivia on Wednesdays in a digital format soon.

Although drinking from home certainly had its moments, a bottle or can just can’t quite match the fresh carbonation of a tap (and a couch, no matter whom you’re sharing it with, can’t compete with the camaraderie of a taproom). So long as it continues to be safe, we’ll return to Inner Groove, and all of our favorites, again this year.