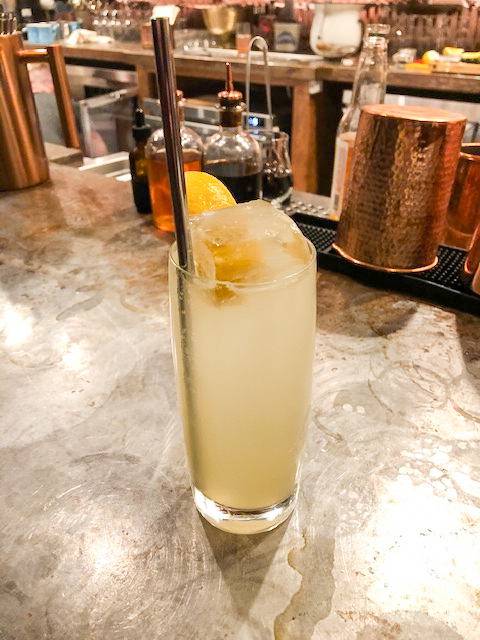 Tonic Highball made with limoncello.

I visited Kingfly Spirits in the Strip District under typical personal circumstances for January—I had a cold.

Not a terrible cold, but bothersome enough to warrant a hot toddy. I had heard much about Kingfly since it opened on February 2, 2019. How the distillery uses ingredients from all over the world. How it makes its bitters, seltzers, syrups, tonics, and vermouth in-house too. I was eager to see if its hot toddy could do the trick, and assuming it could, to try additional spirits.

In 1906, Kingfly was a carriage house—an expansion of a Civil-War-era barn for Craighill Hauling. The house had passed hands many times, including the E.M. Hill Lumber Company and the Acme Pattern Company.

When my girlfriend and I visited on a Friday evening, this history was alive and well within the distillery, particularly regarding its restored wooden interior. No wonder it won a Pennsylvania Historic Preservation Construction Award in 2019. 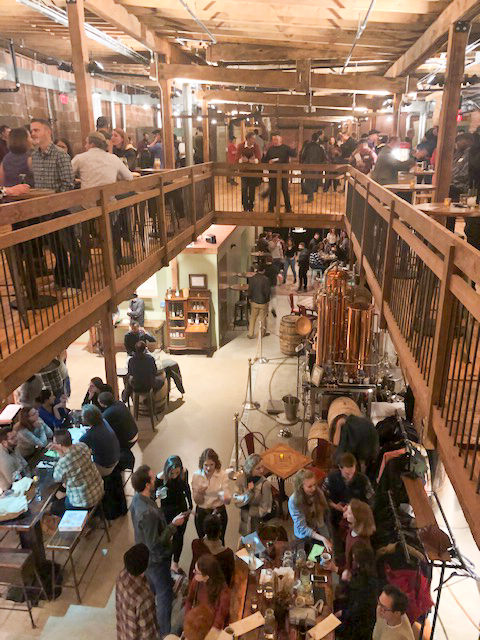 A birthday party of 30 arrived before us, yet we snagged two seats at the bar. I ordered my toddy, a seasonal cocktail. She ordered a vodka highball, another seasonal cocktail, this one on draft, like a beer. But it had kicked and needed to be replaced. While she waited, she ordered a Bane of Existence IPA from Hitchhiker Brewing. The bar was out. Third time was the charm: a Hitchhiker Barbarian IPA and a slice of rum cake.

The Barbarian started out tasting like a West Coast IPA (bitter) and finished as an East Coast IPA (hazy, fruity). The cake enhanced this fruity aftertaste. The cake itself was fluffy and boozy. A slice, thanks to its spiced-rum glaze, equals about one shot. 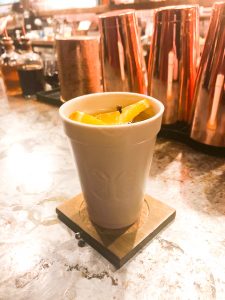 As for my toddy, our bartender, Lindsay, mixed raisin brandy, falernum, lemon, honey, and ginger. An orange peel skewered with cloves garnished the mug. The drink tasted potently of brandy with a lemony hint. It was hot (but not too hot). Delicious.

My sinuses cleared, I was eager to try the vodka highball. Lindsay apologized: it hadn’t just kicked but was out. My girlfriend ordered a tonic highball instead made with limoncello, seltzer, rosé, and quinine. She chose limoncello because it was made with Sorrento lemons and the last time that she drank authentic limoncello was in Italy. We toasted Rush drummer Neil Peart, whose family had announced his passing hours earlier, and David Bowie, who died four years ago to the day.

“Best. Lemonade. Ever,” I said after trying it, thinking of the lemonade stands at the Three Rivers Arts Festival. It contained a subtle rosé flavor as well. 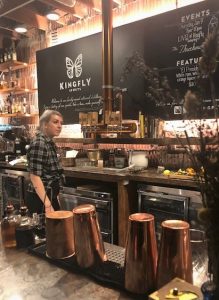 In between mixing drinks, Lindsay waits for a draft to fill.

Although the birthday party slowed things down, Lindsay kept calm and continually checked on us. And although two beverages ran out, everything we drank was expertly mixed and served in spotless glasses. Anyone who plans to bring a large party should consider renting the second floor, or at least call ahead of time as a courtesy to all patrons and staff.

I finished the evening with a .75-ounce pour of Bliss Premium Spiced Rum. Interpol played in the background. Not Rush or Bowie, but the gothic indie rock paired well with my rum, which was smooth with a long, satisfying burn.

One can also order local craft beer, cider, and wine plus coffee and espresso-based beverages. The distillery sells bottles of whiskey, rum, vodka, limoncello, and grappa. Kingfly Spirits are available at area bars and restaurants. Owners Blake Ragghianti and Mark Willson hope to have their products in state stores by the summer or fall.

Swing dancing and live music, especially Thursday jazz, are some of Kingfly’s recurring events. Parking is on the street and in a nearby garage. 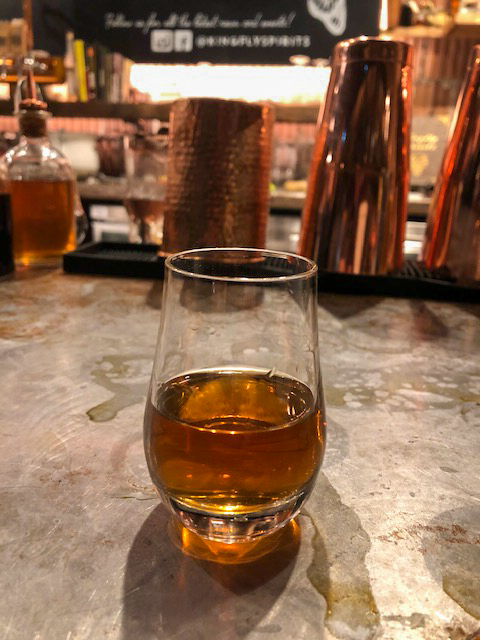 Breaking the Chrysalis of Standard Spirits 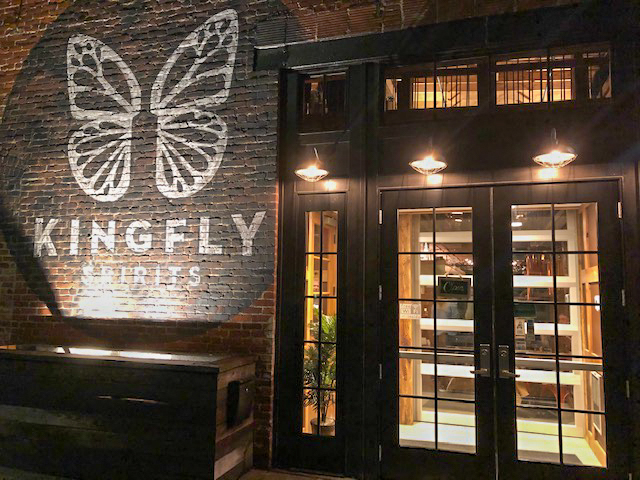 According to a Facebook post by Kingfly shortly before it opened, “The ultimate mark of natural transformation and the Kingfly brand comes from the monarch butterfly. Nothing quite tells our story better than the monarch’s ability to transform and migrate with grace.” Hence the butterfly logo.

When asked what transformations are coming in 2020, Ragghianti, who is also head distiller, said, “We’re quickly outgrowing our space. At some point in the near future, we’ll be looking for a new production space.” 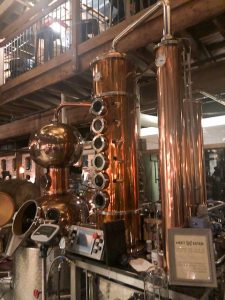 Meet Ester: a pot-column still named after a fermentation byproduct.

Kingfly will stabilize and focus on its core products while expanding its current offerings, especially its international line. Ragghianti wishes to look beyond single-barrel distilling toward an additional blending line too.

Finally, a friend gave Ragghianti an old steam whistle from a paddlewheeler from the Ohio River. He attached it to Ethyl, Kingfly’s rite boiler, which is named after ethyl alcohol. (The pot-column still is named Ester, after a fermentation byproduct). When a batch is done, the whistle blows. Don’t expect to hear it at last call quite yet. “We’ve blown it only three times,” Ragghianti said, adding, “It’s loud.”

For now, cold season has a few more months. Kingfly’s hot toddy can help while all of its spirits and cocktails remain ripe for any season. 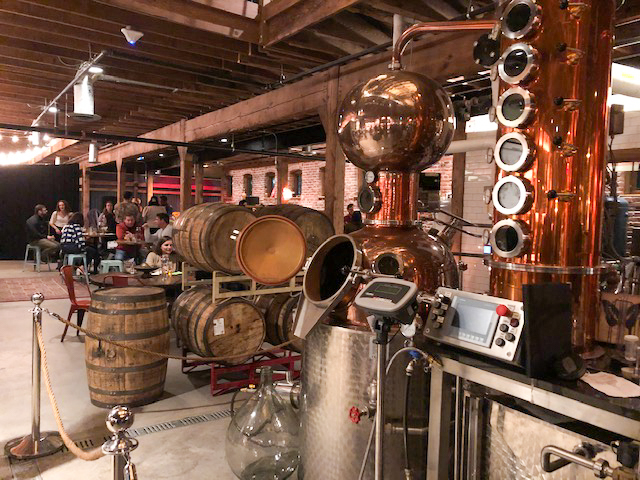 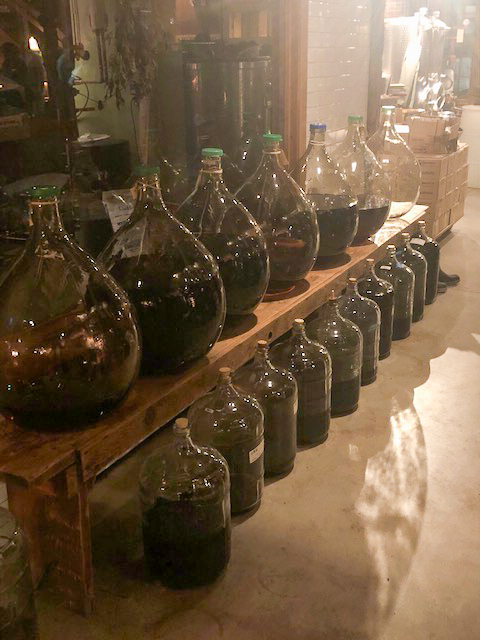