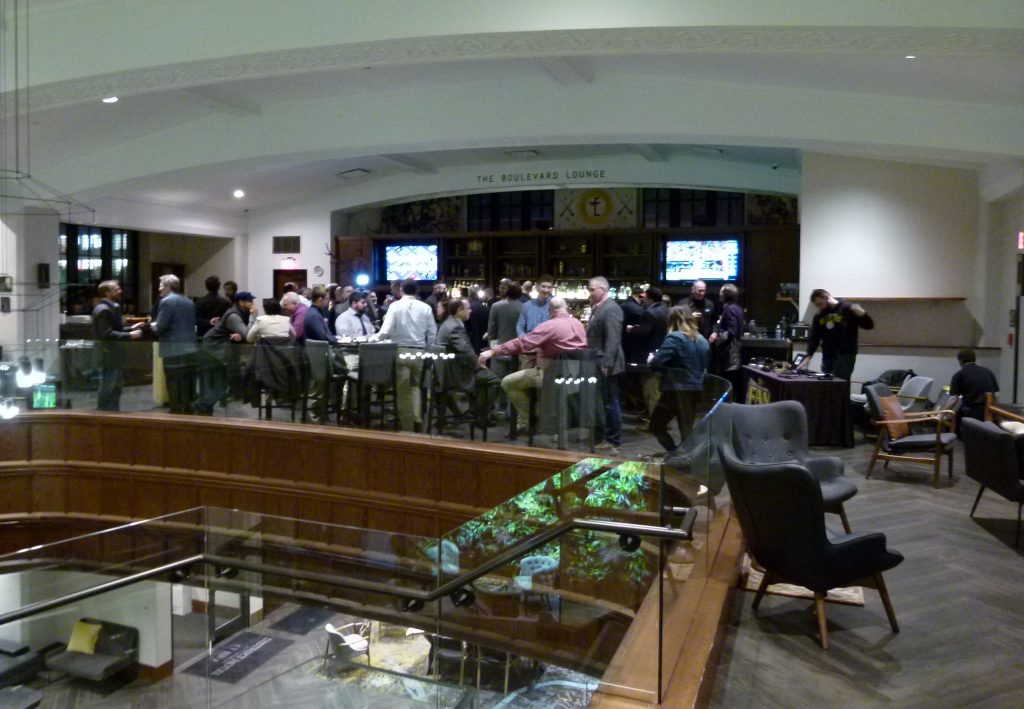 The Distrikt Hotel and its Or, the Whale Restaurant recently held a launch party for their new offering, The Boulevard Lounge. The Distrikt Hotel is located in the former Salvation Army Building on the Boulevard of the Allies in Downtown Pittsburgh. Some architectural flourishes of its Gothic Revival classic architecture can still be seen inside the new hotel.

The lounge is situated on the horseshoe-shaped lobby balcony. To access it you go up one of the twin staircases near the living plant wall in the lobby or simply take the elevator. The room can hold about 150 guests and also serves as a private event space when booked. Seating consists off high top tables and chairs and a series of more intimate and charming spaces where patrons can sit on very comfortable chairs and couches in the small alcoves of the lounge.

For the launch party, drinks flowed and a buffet line featured several delicious selections from the Boulevard’s menu. Food offerings included Gumbo of the Allies, arancini, lobster fritters, wings, and seasoned fries. Later a sheet cake with “To New Beginnings” in icing letters on top was cut for guests to enjoy.

Rachel Borovik, Events Coordinator at or, The Whale and The Boulevard Lounge, pleasantly chatted with the guests and made sure everyone was enjoying themselves. Radio station The Fan 93.7 FM was on hand to do a remote broadcast. Distrikt Hotel Pittsburgh General Manager Mark De Intinis was also there to ensure the event ran smoothly and that the guests were happy.

Distrikt Hotel Pittsburgh, a part of the Curio Collection by Hilton, also offers a rooftop event space on its 10th floor for private parties which gives beautiful views of Downtown Pittsburgh and the Monongahela River.