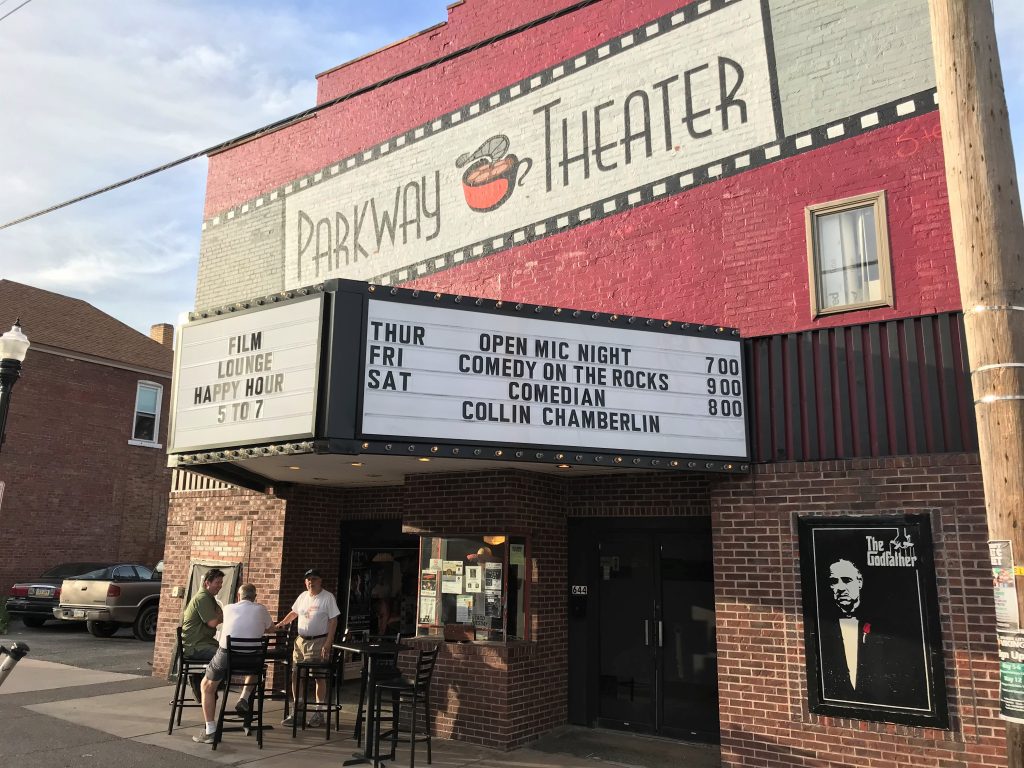 While many Pittsburgh-area movie theaters now sell alcohol, only one—The Parkway Theater in McKees Rocks—allows you to drink in its film lounge or taproom without purchasing a ticket, although you would be well-advised to stick around for a movie or other fun event.

Thank Aaron Stubna, who bought the abandoned theater in November 2011, reopened it in November 2012, and remodeled it in 2017. He had the vision to add a lounge and a taproom.

Leather chairs and stools offer plenty of comfortable seating in the lounge. Stubna and his wife, Jackie, tend the bar quickly, effectively, and with smiles. Behind the bar and above myriad colorful spirits hang two flat screens. These televisions and the projector screen in the middle of the room are usually tuned to Pittsburgh sports. Right now, the Pirates. During football season, expect the lounge to open on Sundays for Steelers games. 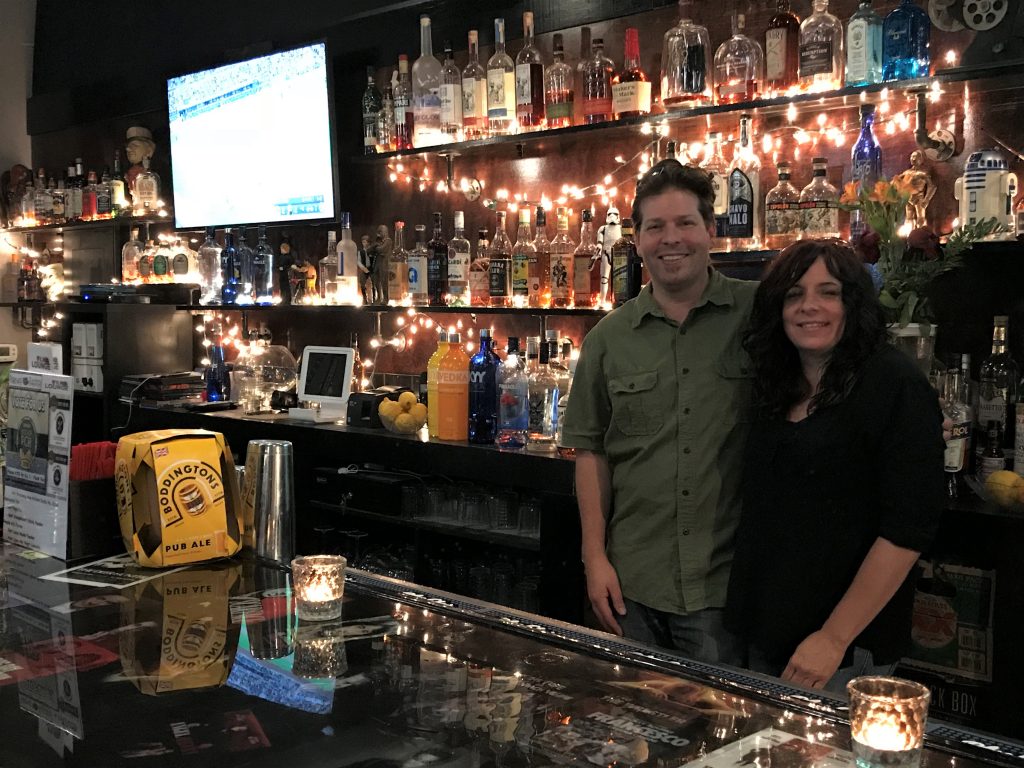 To the left of the lounge is the Abjuration Brewing Taproom. My girlfriend was camping with her sister the Friday that I visited. I agree with the comedian Jim Gaffigan, who once said the happy camper is “the guy leaving the campsite.” Thus, I stayed in the city and invited my father. We took our bar stools at one of the industrial tables.

Dad was driving, so that left me double-fisted. Abjuration sells its beers in four-, eight-, and 16-ounce glasses. I ordered two four-ounce beers. Each came in a beaker, a clever nod to the chemistry at all brewing’s core. 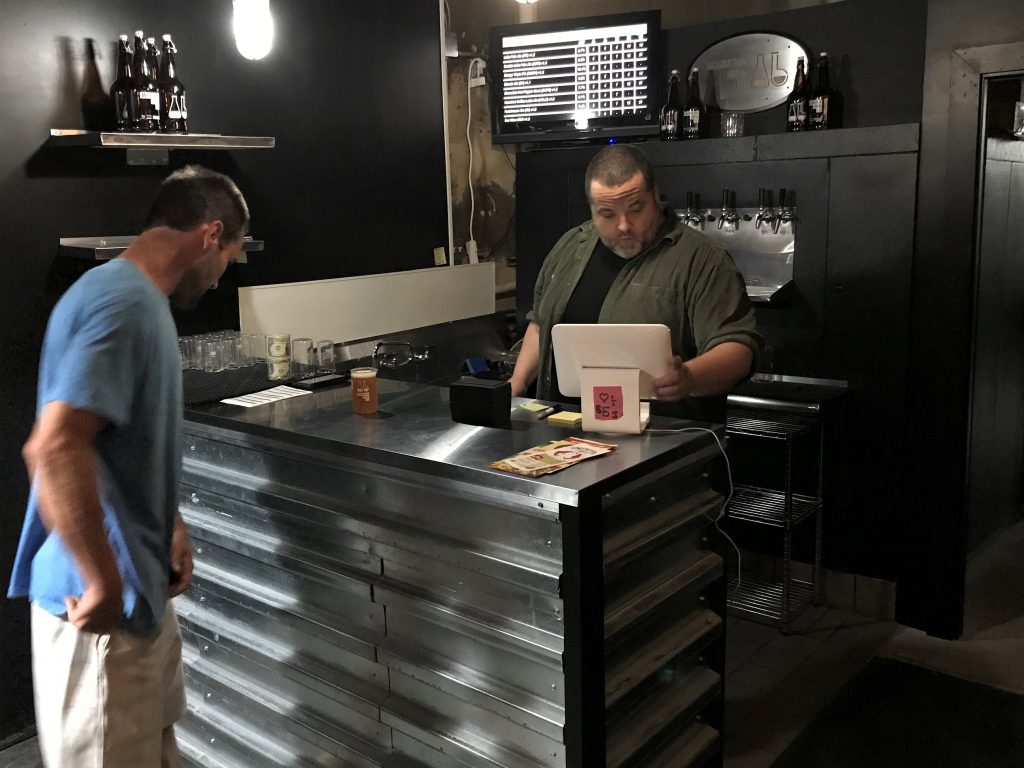 First was the Mango Triple IPA Version 1.3. I like my IPAs hazy, and this one was like imbibing on a cloud. The mango flavor was front-and-center but not overpowering. At 10.4% ABV, this beer will knock you down.

Next was the Chocolate Hot Pepper Stout Version 1.2 (7.7% ABV). It was my first beer brewed with peppers since I visited the Sierra Nevada Taproom in Mills River, North Carolina, this year. I enjoyed that beer and was initially disappointed with the Chocolate Hot Pepper Stout, which was brewed with Carolina Reaper peppers, as I tasted only chocolate notes on the first sip. As I drank though, I could feel the heat build to a satisfying burn that lingered after the last gulp—a pleasant surprise after all. 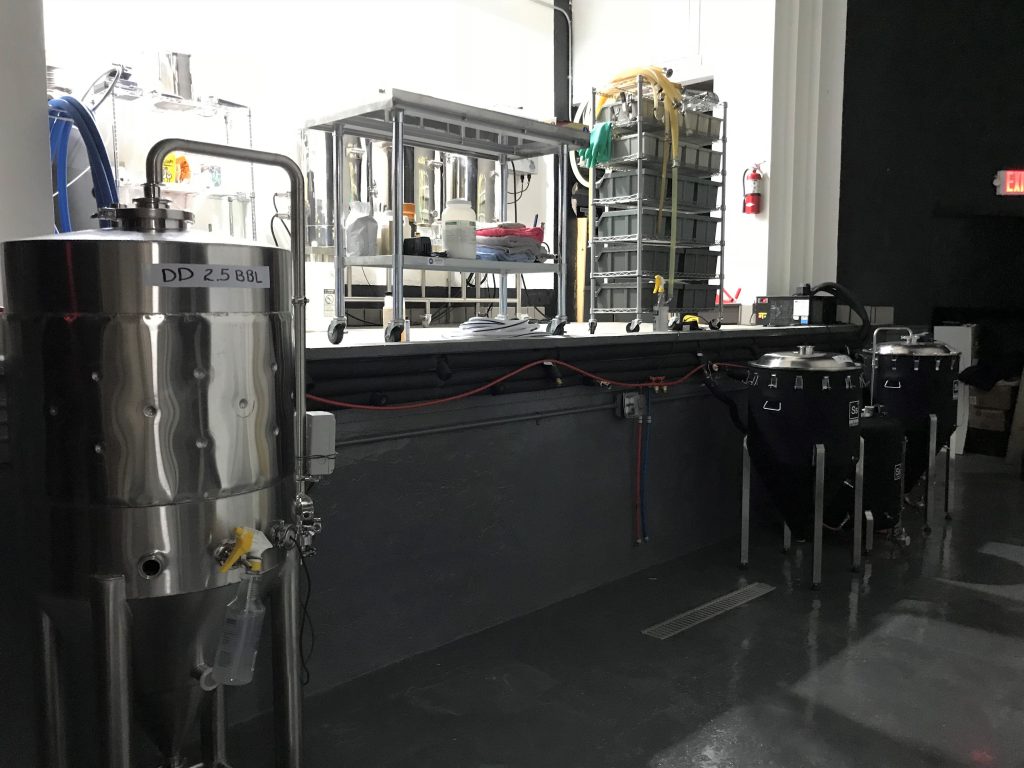 Some of the brewing equipment at Abjuration Brewing.

The name Abjuration comes from three things. The two brewers, Tom Glover and Dave Hallam, are gamers, and the word is used in games such as “Dungeons and Dragons.” They also wanted a name that began with “A,” as it puts them first on alphabetical lists at beer festivals. Finally, “abjuration” comes from the Latin roots for “breaking the law.”

If you wish to brew these originals yourself, Glover and Hallam make all the recipes, which use all-natural ingredients, available online. They constantly create new beers, rarely repeating, in the brewery behind the lounge and theater.

Stubna owns a third-generation barber shop, Lincoln Barber Shop in Bellevue. One of his customers put him in touch with the Abjuration guys, who at the time were homebrewers, when Stubna was looking to expand. The Parkway Theater is the only one in the Pittsburgh area to also house a brewery. Abjuration opened there Dec. 1, 2017.

No movie was showing the day that I visited, but I did scope out the theater. Forty-five seats make it feel less like a theater, and more like a private screening room, which is what Stubna calls it anyway.

“How do you get people out of their home?” he asked. “You create the home atmosphere.”

The chairs are large, plush, and as comfortable as anything you would sit in at a multiplex. Stubna also built a small, sound-proof hallway that leads from the lounge into the screening room, so outside noise will never infiltrate. 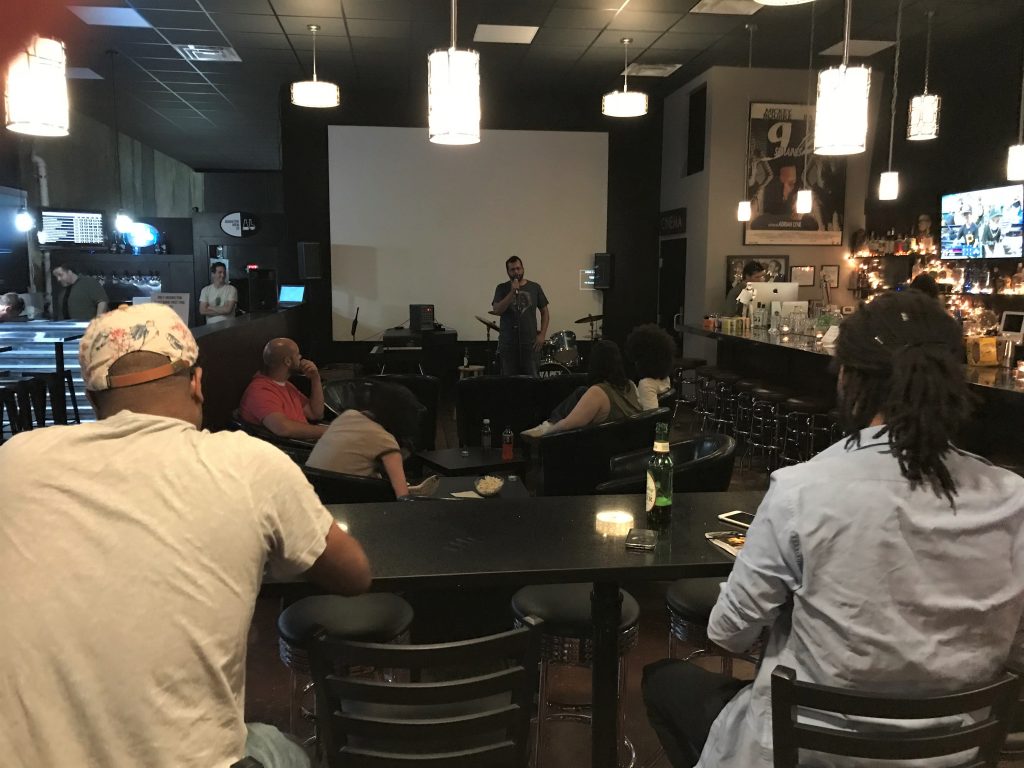 Movie selections lean toward the independent, the local, and documentaries. He recently showed Sammy Davis, Jr.: I’ve Gotta Be Me, a critically acclaimed documentary about the legendary singer, as part of The Pittsburgh (UN)CUT Film Festival.

The Parkway will screen Poured in PA, a documentary about the commonwealth’s breweries, in August. Stubna is still working out the details, but he hopes to have three Pennsylvania breweries on site for the screening. He also hopes to bring back Spaghetti Westerns at some point, and he’s always looking for original documentaries. Ticket prices for movies vary, and some are occasionally free.

I caught the beginning of the comedy night and thought the host, Zach Cieply, was affable. He warmed up the crowd with a bit about pool noodles. About a half-dozen other comics and a few audience-members were in attendance, all supportive.

Ultimately, The Parkway Theater, which Stubna attended as a boy until it closed circa 1990, is a labor of love. He secured non-profit status for the Parkway in 2014 and is committed to the theater becoming a cornerstone of McKees Rocks’ revitalization. This commitment has allowed him to transcend his initial passion—movies—to create a space that offers more not only for the neighborhood but also Pittsburgh. 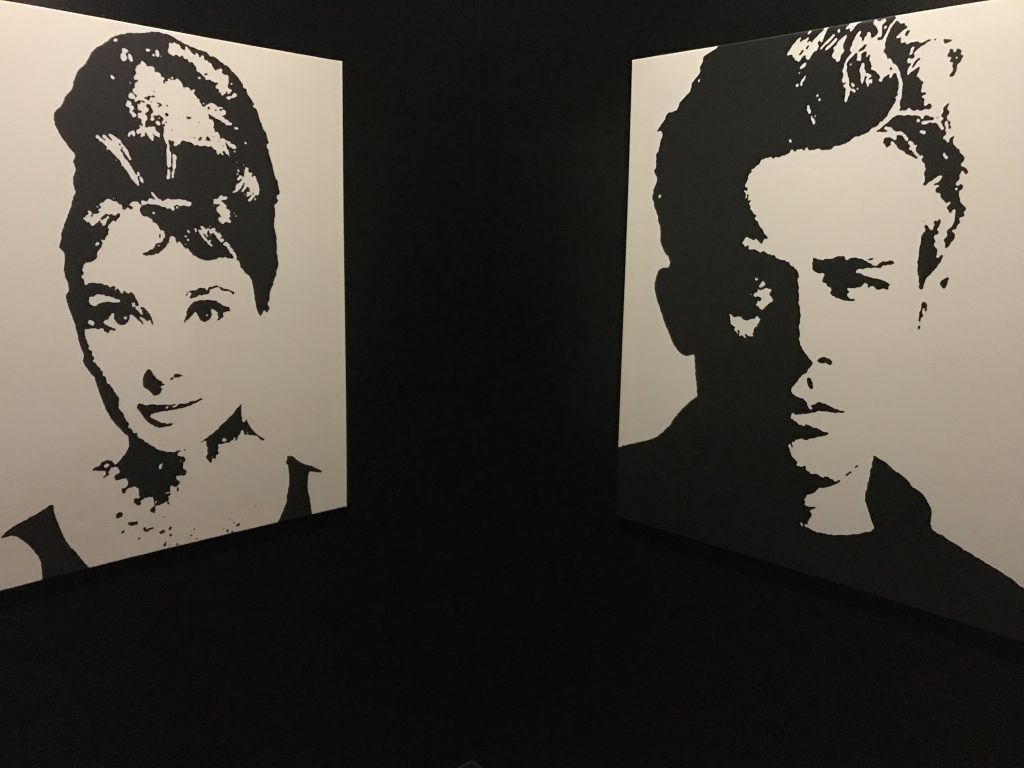 Film art at the Parkway Theater of Audrey Hepburn and James Dean.

Check the Parkway’s website for show times and other events.