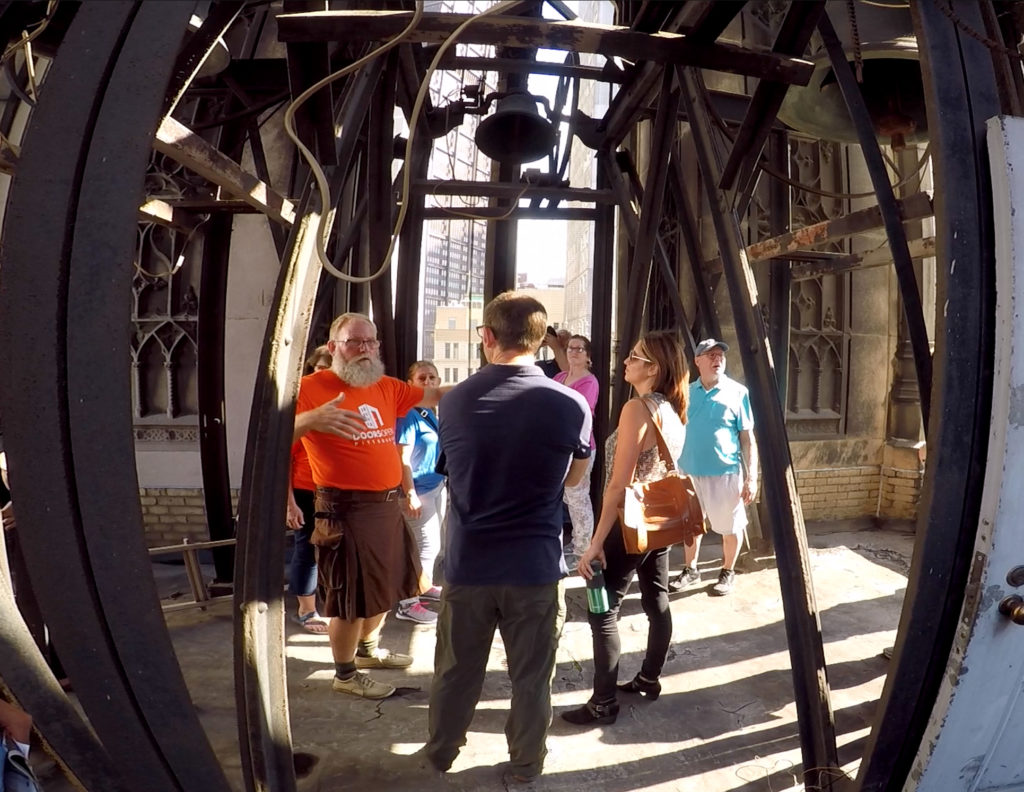 DOORS OPEN participants in the belfry at Smithfield United Church of Christ.

It’s fun to get a peek behind the scenes or of someplace you’re not supposed to be. Both of these things are true with DOORS OPEN Pittsburgh. The event will occur Saturday, October 2 from 10 a.m. to 4 p.m.

Bonnie Baxter, a Pittsburgh native and former television executive, founded DOORS OPEN Pittsburgh in 2016, after being inspired by a similar event while living in Chicago. It started as an annual event that afforded the public a peek into places that aren’t normally seen like landmark buildings and interesting new spaces. 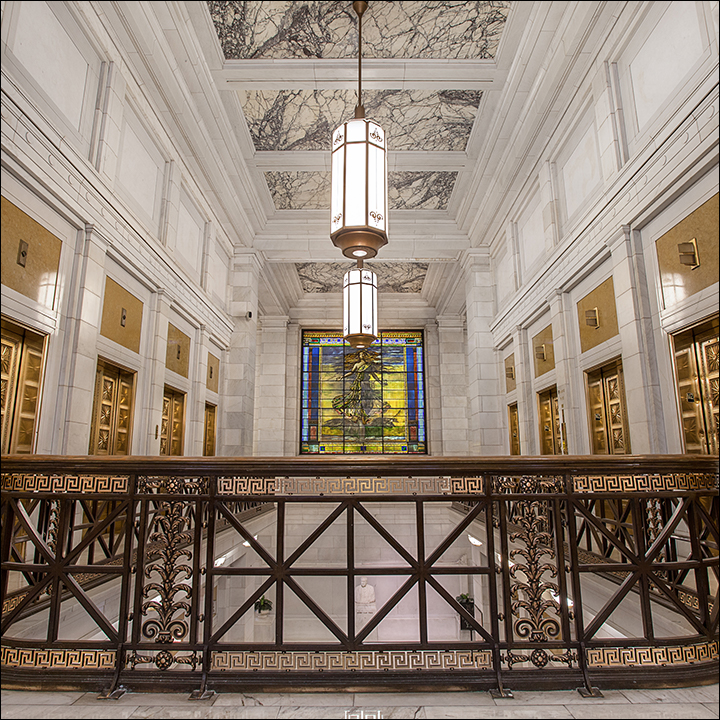 The ornate, classic style of The Frick Building can be seen during the event.

There are also Insider Tours for an additional charge. These include Antique Skyscrapers (upper floor and rooftop access), Grant Street: The Heart and Soul of Downtown Pittsburgh (history of the buildings and their architects), Roots of Pittsburgh (Pittsburgh history), and The Notorious Pittsburgh Tour (a look at places where some of the city’s most notorious events occurred).

I spoke with Bonnie Baxter by phone as she was putting the finishing touches on this year’s DOORS OPEN. When asked what the goal of DOORS OPEN is, Baxter replied, “As a nonprofit organization our goal is to expose people to Pittsburgh’s architectural history by educating people in a fun manner and getting them inside of our architectural gems.”

“What’s especially exciting for people this year, Baxter said, is the new buildings participating for the first time. I’m very interested in finding out more about the Pittsburgh Cultural Trust’s Harris Theater. It’s an old-time theater and one or two of the original projectors are still there which their enthusiastic projectionist will tell people about and other notes of interest. The other new buildings are the Pickering Building, The Industrialist Hotel (The Arrott Building), Cultural Trust Theaters, Pittsburgh Downtown Partnership Offices, and The Bank Tower (Baxter said there’s a great photo opportunity there with one of the grand windows).” 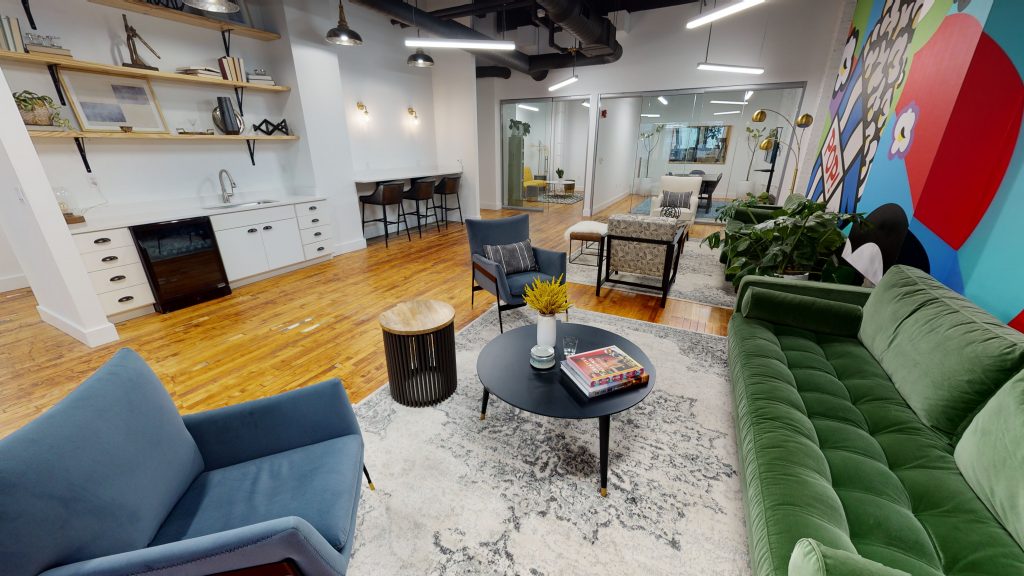 A contemporary office space in the Pickering Building replete with a mural from artist Burton Morris.

Due to the increasing popularity of the annual DOORS OPEN, more events have been added covering Pittsburgh’s history, culture, and neighborhoods. The offerings have branched out and now include: the big annual event, bus tours, guided walking tours, neighborhood walking tours, specialty tours, and even virtual storytelling.

Being that we are in the delta variant part of the pandemic now, certain buildings may require a mask for entry regardless of vaccination status, so have a mask with you at all times.  Additionally, proof of vaccination and photo ID are required for entry into select buildings that are owned and presented by the Pittsburgh Cultural Trust. For tickets and more information see the DOORS OPEN website. 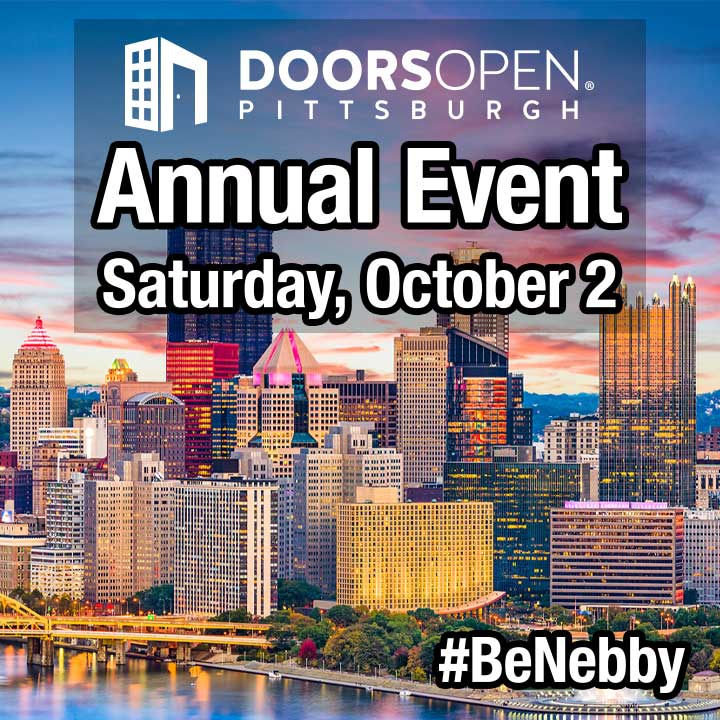