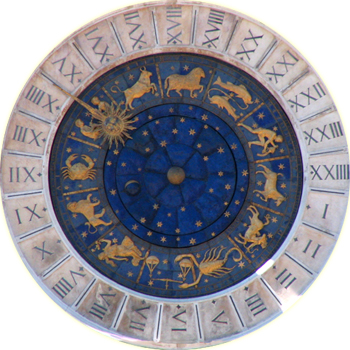 An astrological clock in Venice, Italy. (photo: Zachariel and Wikipedia)

We at Entertainment Central are occasional readers of horoscopes. However, we haven’t felt that the current horoscopes are reflective of our times so we consulted our own astrological charts and developed one.

After a very cold spring you will enjoy a warm breeze gently caressing your back until you realize it is the guy behind you who is also waiting for his take-out food at Red Lobster and not maintaining social distancing.

Geminis are known for creativity. Your favorite skateboard park is filled in with sand to prevent use during the time of social distancing, but you and your skateboarding friends will steal enough auto parts to build a dune buggy.

When the moon is in the Seventh House and Jupiter aligns with Mars, you will enjoy listening to the power pop mystical song “Aquarius” from Hair.

A mysterious new stranger will appear in your life. Don’t get too excited though, it’s just a census taker.

You will better understand the plight of the ancient Israelites as they fled Egypt. Everything you bake will taste like matzos because there is no yeast. You will, however, manage to keep the kitchen stocked with chunky peanut butter. As Warren Zevon said, “Enjoy every sandwich.”

During total shutdown, with park equipment removed, you mastered the Zen art of playing tennis without a net. Now you must aim higher.

Scorpios are known for their passion. You will meet someone very special online and things will progress rapidly on your first video date. After several drinks, one thing will lead to another until you both engage in video sex.

Your zodiac sign spans November and December—the 11th and 12th months of the year. If you add 11 + 12 then multiply that figure by 173, divide by six, and then multiply by 14, you get 9,284.33. This doesn’t mean anything, but at least you took your mind off of things for a few moments.

You have many secret admirers. They’re after your job.

A period of increased boredom will lead you to binge-watch many hours of television. This will make you very knowledgeable about Plexaderm, West Shore Home with B.J. Werzyn and Joe Klimchack, and Liberty Mutual’s LiMu Emu and Doug.

You will learn that partial re-opening is called the “yellow” phase because it means “Be afraid.”

You think that after this is over, you won’t want to do anything virtually. But you’ll be wrong.

Rick Handler, a Scorpio, is the executive producer of Entertainment Central.