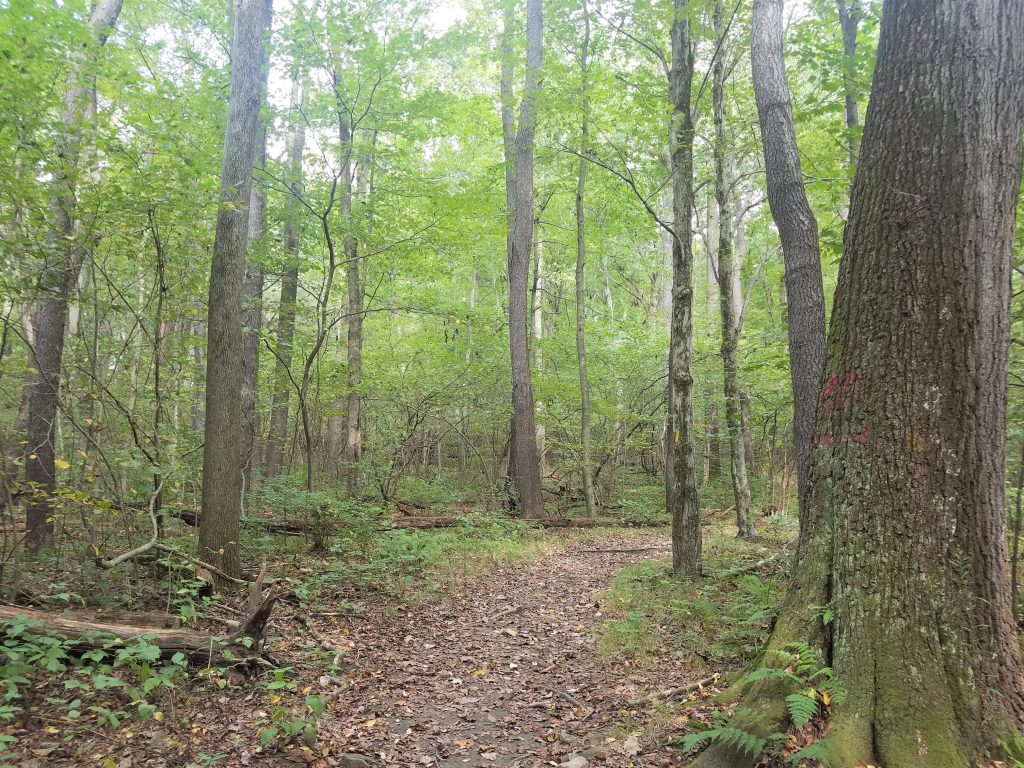 I had been way overdue for an outdoor excursion and several weeks ago I saw an opportunity to take one. It was a Monday afternoon, one of the last good days of warm, sunny weather.

After taking care of business, I grabbed my hip pack, hopped in the Jeep and headed for Laurel Ridge State Park near Johnstown. Laurel Ridge State Park is the northernmost terminus of the Laurel Highlands Hiking trail which extends all the way south to Ohiopyle. Previously I had hiked north and south of the trail near Route 30 on Laurel Mountain. 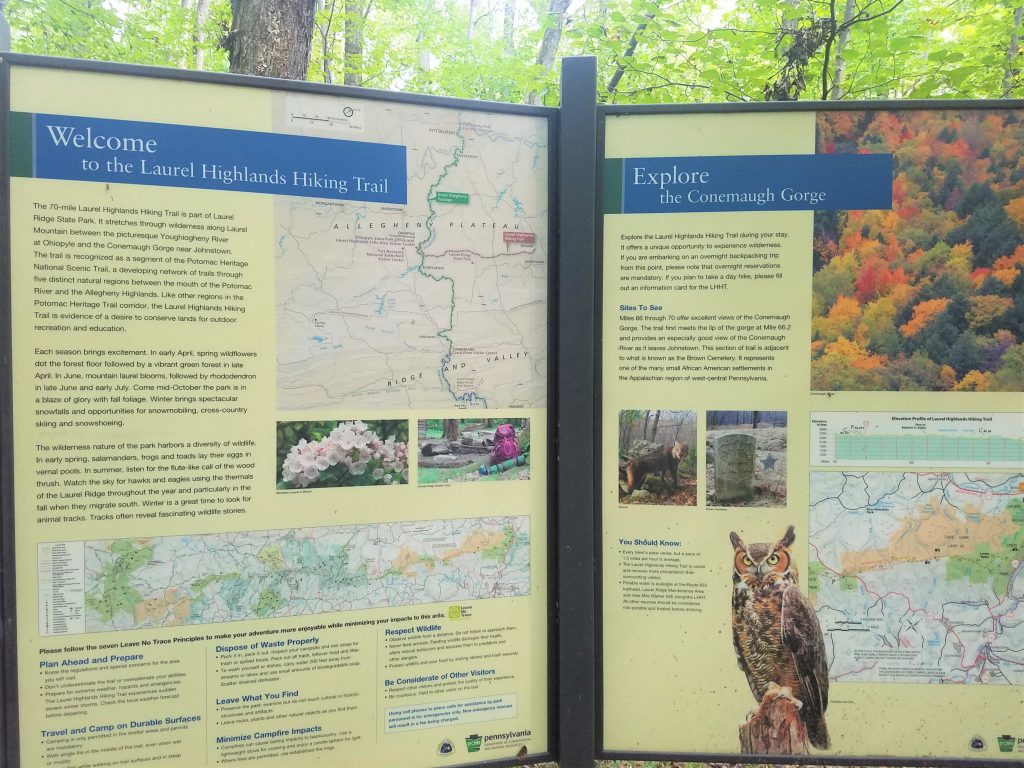 After arriving, I found the trailhead a short distance into Laurel Ridge State Park. I sprayed on some tick/insect spray, strapped on my hip pack and started on the trail. I could hear winds swirling overhead in the high tree canopy. It was making acorns fall from the trees like hail raining down in a storm. 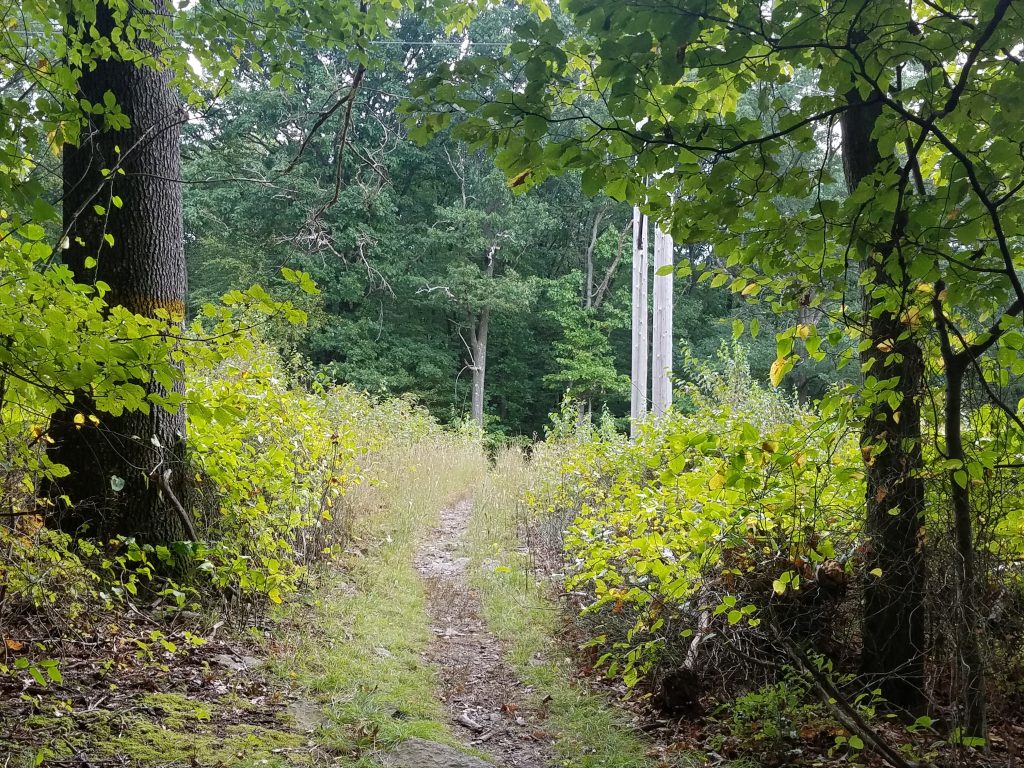 The trail emerges from the forest onto a wild meadow where electrical transmission lines run high overhead.

The trail was going to be all uphill, many parts contained small and medium sized rocks and exposed tree roots. The mountain landscape was green and lush. I knew that it was going to be a difficult uphill hike as I had viewed and printed a trail map from the PA Department of Conservation and Natural Resources website. As I climbed higher, I noticed more ferns and mushrooms. The insects were not bad except for some gnats. I could hear occasional trains running in the river valley below. 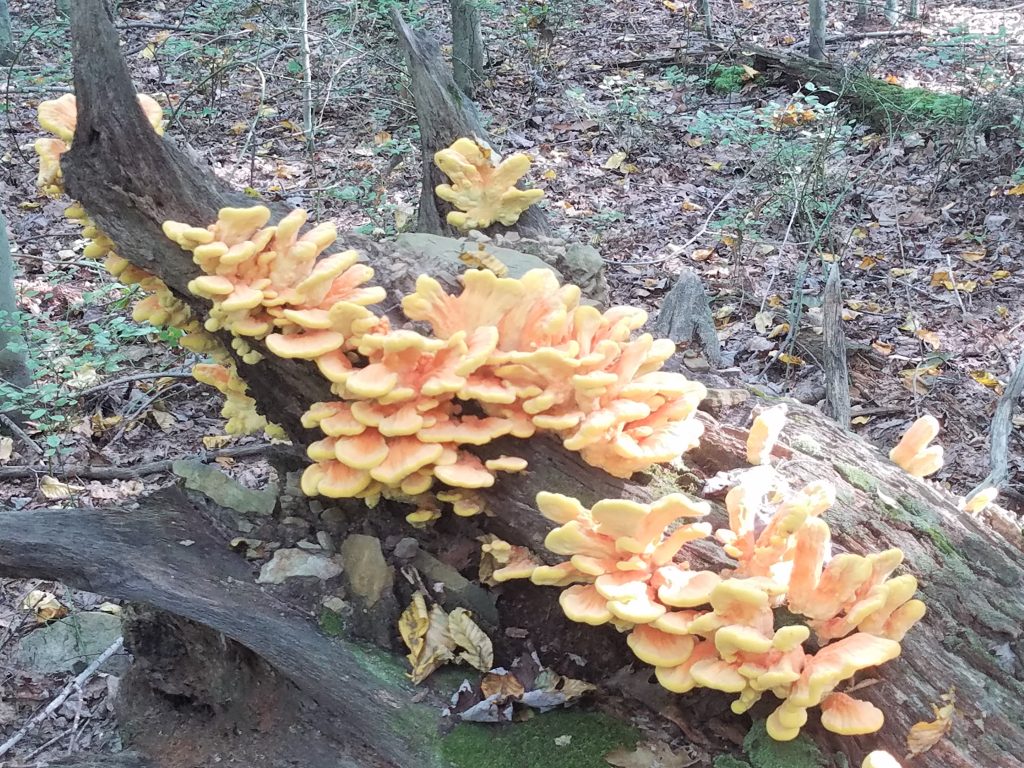 It was a hot humid day with temperatures of almost eighty degrees. I took a couple breaks for water and to eat some peanuts and grapes for energy as I continued climbing higher.

I continued on, wondering how much farther I wanted to go. I had hoped to make it to a part of the trail that promised good views of the Conemaugh River Valley. The views started between the second and third mile of the hike. It was getting a little late in the day, about 4:30 p.m. and I would still have to hike back down the often difficult trail. Most accidents occur when hiking back down a trail because the person is tired from the climb up. 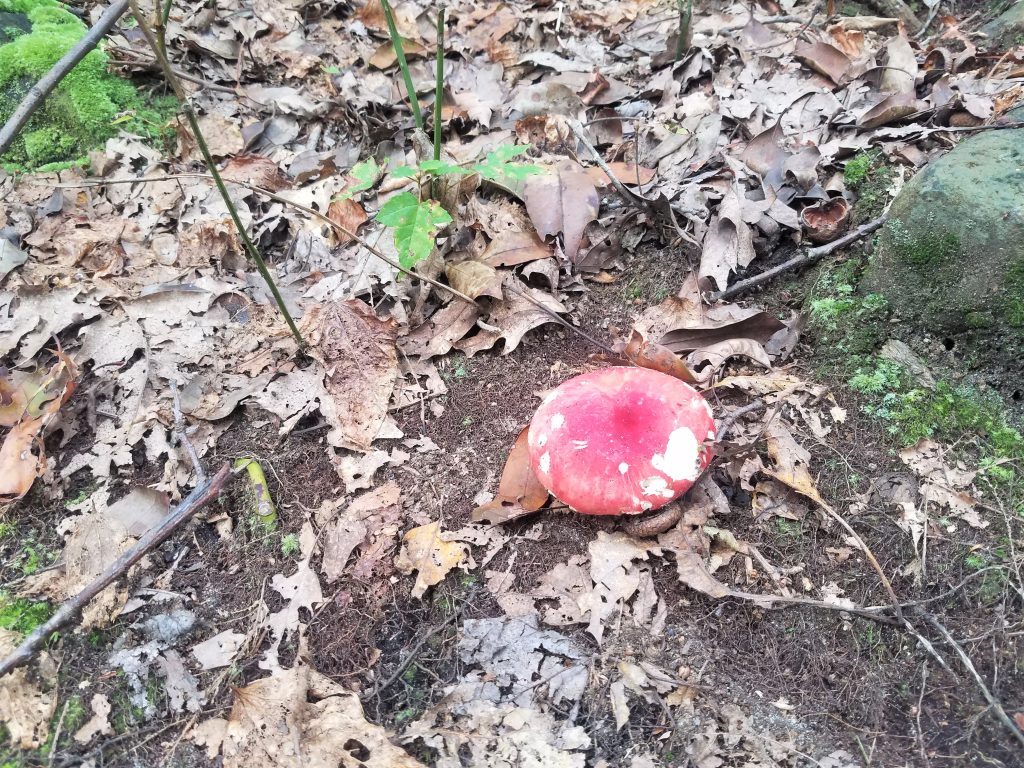 I decided to press on a little more, having done about a mile and a half. I continued hiking for about 15 more minutes. Then something to the right side of the trail just ahead of me caught my attention. It was a four-foot long black snake. I knew it wasn’t poisonous as only rattlesnakes and copperheads are the poisonous snakes in Pennsylvania. Nonetheless, a snake bite of any kind is not fun. I pondered giving it a wide berth and going off the trail a little on the left side to get out of striking distance. I stood about five-feet away from the snake, it was lying on the ground motionless except for it’s flitting tongue. I had probably surprised it, just like it had surprised me. We both stood still, surveying each other for a few minutes. 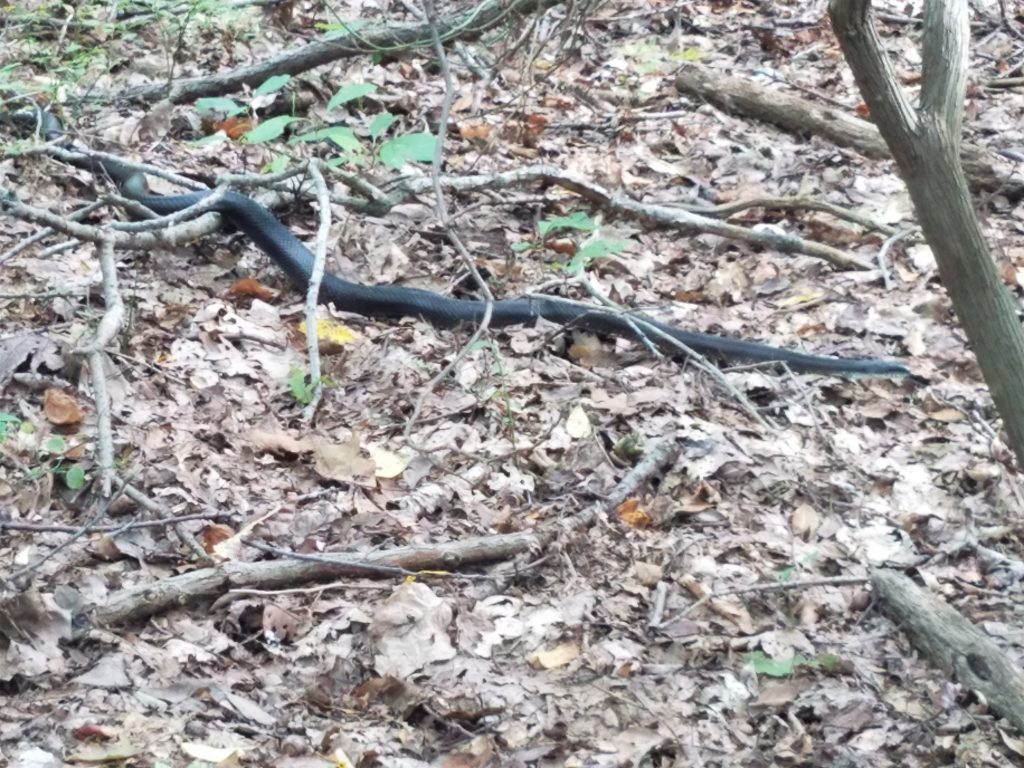 A black racer snake lying motionless to the right of the trail.

I then decided that seeing the snake was a sign that I should be cautious and turn around. And sometimes when you see one snake, there are others around. I decided not to press my luck and started back down the mountain.

For the walk down I grabbed a good branch to use as a walking stick. I called it “Sticky” (solo hiking trail humor can be a little out there sometimes). It’s especially good to have one on the hike down for three points of contact. “Sticky” did assist me, as I was walking down, my tired right leg caught on an exposed tree root and put me a little off balance. “Sticky” helped me with its third point of contact. 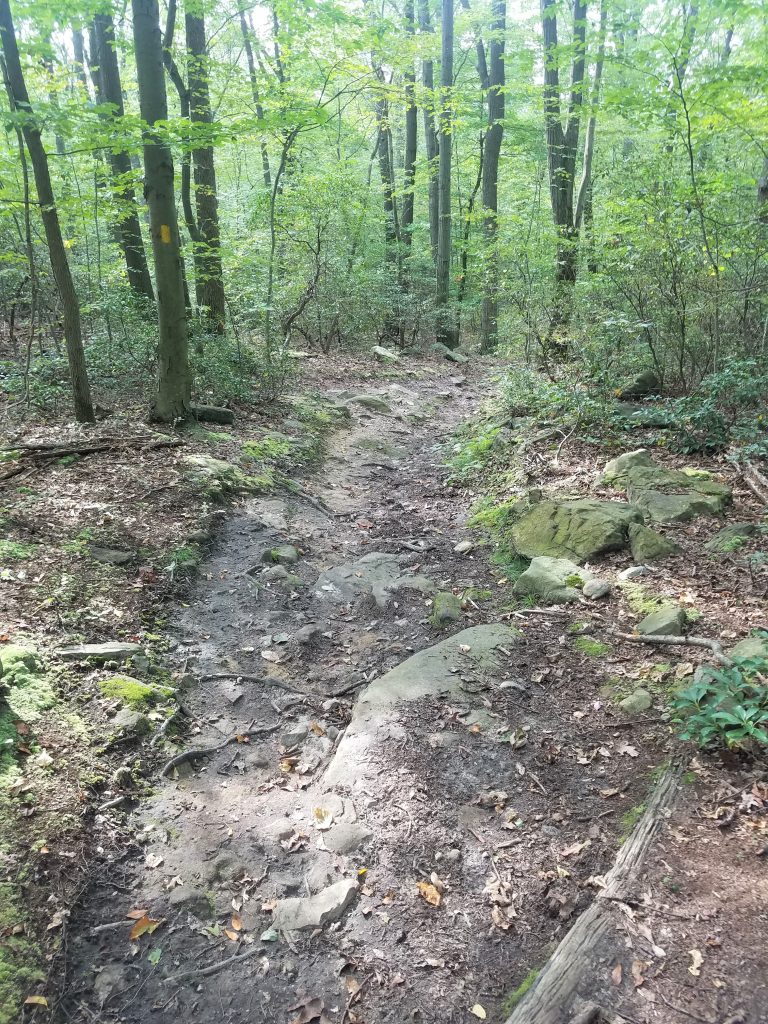 Heading back down the trail.

Although I didn’t achieve my goal of getting to the scenic overlook spots at the top of the mountain ridge it still was a scenic hike. Along the way I saw splendid fungi, beautiful woodlands, interesting trees and rocks, and the black racer snake.

After getting off the trail I decided to drive down the resplendent Conemaugh River valley with its high mountains and scenic gaps to Johnstown.

I drove around Johnstown for a little, taking in the town. I had been there a couple times previously, one visit was for the annual Flood City Music Festival. Johnstown also has the steepest inclined plane (incline) in the world. It’s so steep it seems like riding in an open air elevator up the side of the mountain. It even has room to transport a car. 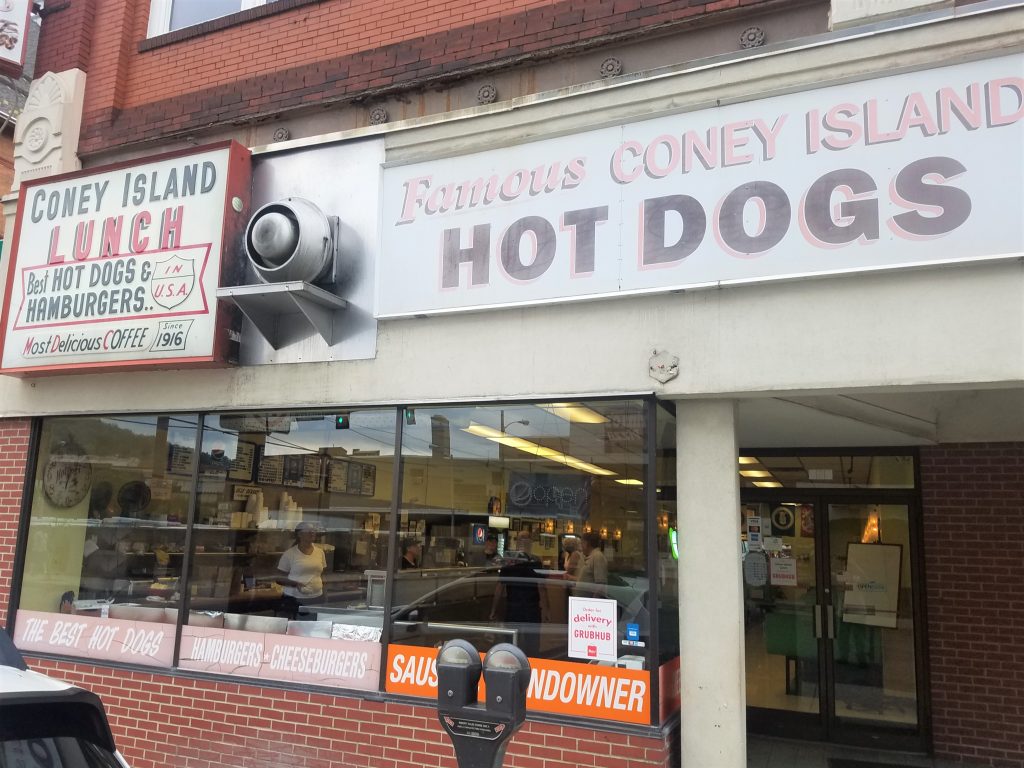 When traveling around town I saw the Coney Island Restaurant. It seemed very historic so I decided to try it. I entered and saw the hot dogs cooking on the grill near the window. I said, “I’ll take a hot dog.” One of the women working said, “It comes with mustard (yellow), onion, and chili. In my mind I was thinking, “What?” I replied, “If I don’t want that on my hot dog I can get it any way I want?” One of the women answered in a business-like manner, “Yes.” My next thought was when in Johnstown, do as the Johnstownians do. I told the counterperson, “That will be fine.”

The hot dog was a regular sized hot dog and bun with mustard, onions, and chili. The onions tasted freshly chopped and the chili was a decent hot dog chili. The price was right too at $2.10. Hungry from the hike I consumed my dog quickly. 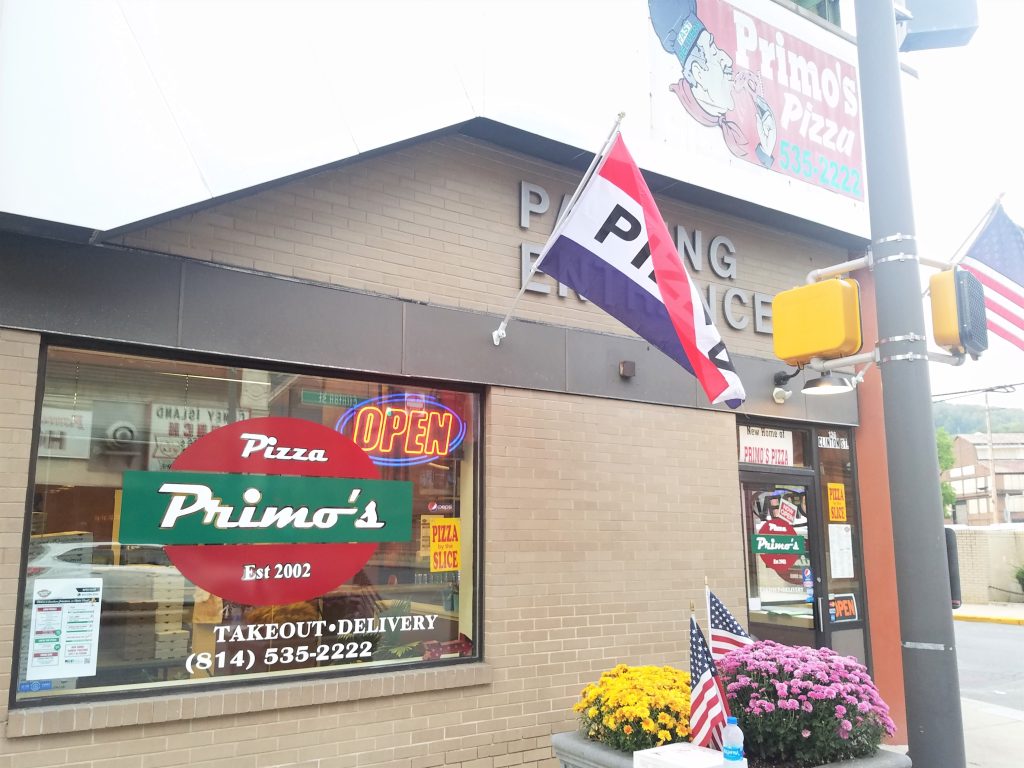 Still not totally satisfied, I went across the street to Primo’s Pizza. The man working the counter was very friendly. I placed my order for two cuts with pepperoni. While it was baking, I asked him if he had worked at the shop long? He replied, “Since I was 14, it’s my family’s business.” I introduced myself and he said his name was John Shirt. The pizza was delicious, with a slightly sweeter sauce. The crust and pepperoni were both cooked to a pleasing crispness.

I had wanted to stop at Stone Bridge Brewing, named for Johnstown’s historic bridge that withstood the city’s two big floods, but alas, it was Monday and it was closed. Having taken care of a little wanderlust I headed back to the ‘Burgh to plan my next adventure.

The fall foliage in the Laurel Highlands is starting to fade now so get out and enjoy your own adventure. For more information on Johnstown see the Visit Johnstown website.