Are you ready for March Madness in Pittsburgh? Do you know what’s special about the NCAA Tournament games here this month? And what the host school, Duquesne University, is famous for … and why basketball is such a big deal anyhow?

Stay tuned and you’ll be meta-ready. Along with details for seeing the games in person, if you wish, we have the fascinating background info (don’t call it “trivia”!) that good spectators need.

Pittsburgh is one of eight cities hosting first- and second-round games of the NCAA Division I Men’s Basketball Tournament. The first round kicks off with 64 of the nation’s best college teams, so that’s eight teams in each city.

Our eight will be paired up in four first-round games at PPG Paints Arena on Thursday, March 15. The four winners then play in two second-round games on Saturday, March 17. Then those two winners—follow the math—become part of the “Sweet 16” playing at various sites the next weekend, with the Final Four meeting in San Antonio to crown a national champ.

Tickets for games here are sold in chunks. You can buy the first two or second two March 15 games, or the two March 17 games, or splurge on all. One catch: Most tix are already bought up or special-reserved. As always, re-selling is a big game within the games. Try shopping at this Duquesne site, which links you to both the few remaining seats and the official NCAA “Ticket Exchange.”

Here are the matchups for Pittsburgh. The numbers in parentheses show the seeding of each team in its respective 16-team tournament region.

The tournament will be televised by CBS, TBS, TNT, and TruTV.

What to Watch For

First-round games match highly seeded teams with low seeds, so they’re usually boring blowouts, right? Wrong! The first round is often the most exciting, because (a) some games match close seeds, and (b) the high-low contests are where big upsets happen.

A monumental upset came in a first-rounder at Pittsburgh’s old Civic Arena in 1997. The virtually unknown Coppin State Eagles of Baltimore—who got into the tourney by winning an HBC (historically black college) league—beat high-ranked South Carolina, 78-65. It was a tense, tight, crowd-screaming game in which the Eagles kept their heads, played smart, and pulled away at the end. (Coppin State nearly did it again in the second round but lost, 82-81 to Texas.)

The games are also a chance to see young stars display their moves. In 2001, Pittsburgh hosted Sweet 16 rounds of the women’s tournament. Connecticut swept both its games, with a loaded lineup including hometown heroine and future pro all-star Swin Cash of McKeesport.

There will surely be breakout performers in the men’s tourney this year. We don’t yet know who they’ll be—but we know the historical significance of the games.

It All Began in … Beaver Falls? 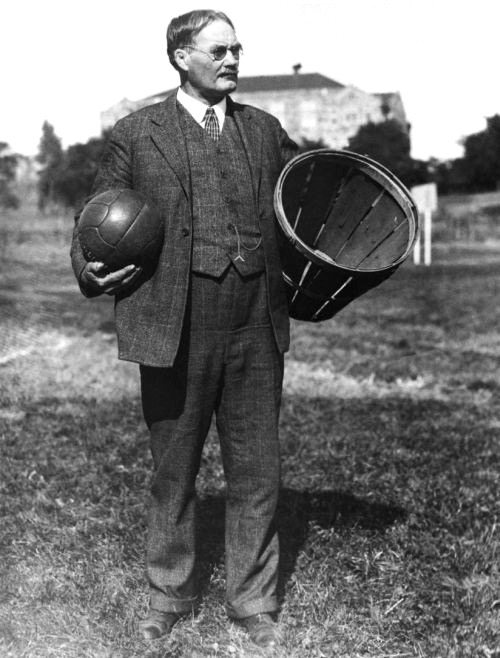 James Naismith with an early basketball (actually, a soccer ball) and a basket (literally) into which it should be shot.

2018 marks the 125th anniversary of college basketball. And the first game (or at least one of the first two) was played by Geneva College in Beaver Falls. After James Naismith invented basketball in 1891, an acquaintance named Charles O. Bemies served as “physical director” at Geneva. Bemies taught b-ball as an intramural sport in ’92, and on April 8, 1893, nine Geneva students—there were nine on a side then—took the court against a team from the nearby New Brighton YMCA.

Geneva won, 3-0. (Baskets counted for a single point, and the crowded floor led to packed defenses.) Last month Geneva celebrated its 125-year-old win with a “Birthplace of College Basketball” gala. But hold the cigar: Vanderbilt is now claimed to have played its first game a bit earlier in 1893, beating a Nashville YMCA team 9-6. This may be true. Geneva does, however, retain the honor of the first shutout.

The Jinx of the First NCAA Title Game

The NCAA staged its first nationwide tournament in 1939. After prelim rounds on the East and West Coasts, the title game was held just outside Chicago, in the campus gym at Northwestern. It was jinxed. Northwestern itself wouldn’t make the tournament until 78 years later, in 2017, being the last major-conference school to qualify.

And who won that first title? Oregon, 46-33 over Ohio State. Oregon made later tourneys but didn’t reach the Final Four again for 78 years, returning in 2017 (and losing in the semifinals.)

The World Is Watching

This year’s champion may or may not be among the Pittsburgh group. Persons watching with great interest will include pro scouts, sports agents, and possibly FBI agents: College basketball has come under intense scrutiny, due to problems that range from recruiting scandals to generally increased commercialization of the sport.

What’s no problem at all is the widespread appeal of the sport. Basketball is now a world game—not as universally popular as soccer (“football” to the rest of the world), but played at the grassroots level almost everywhere, and at higher levels in most places. Countries fielding national teams run the gamut from Chile to Nigeria to Kazakhstan, Nepal, and Cambodia. 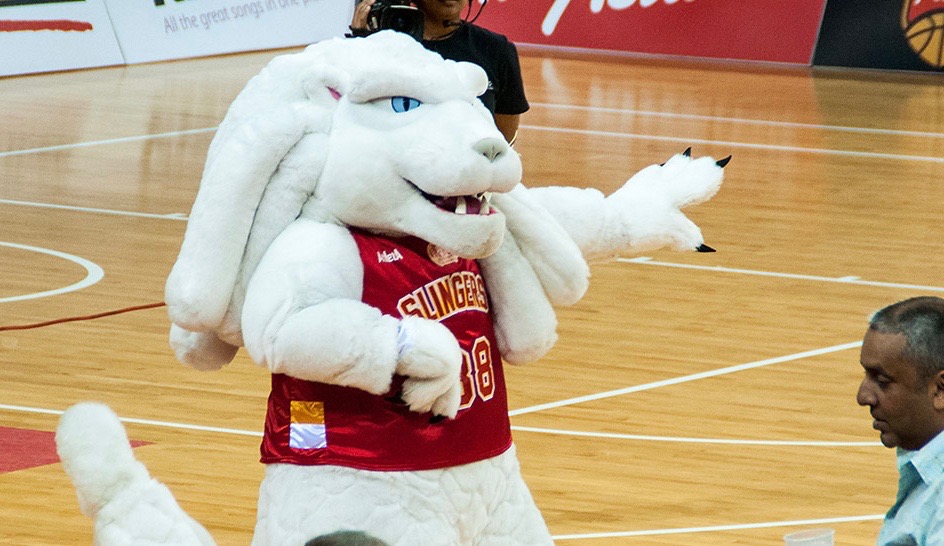 That’s no rabbit; it’s the Merlion (mermaid + lion) and he’s the mascot of the pro Singapore Slingers in the ASEAN Basketball League.

Basketball in many respects is soccer’s mirror image. The main difference is that in hoops you use your hands and score often, versus using your feet and scoring seldom. But both games move fast, require little equipment, and are fun to play or watch.

Hence, global popularity. And, to the extent that people in other countries can pick up the telecasts, a global audience for the NCAA games in Pittsburgh.

Props to the Dukes

Duquesne University is the host institution for these games. Although the Dukes won’t be in the Big Dance this year, they have a proud basketball history. Let’s close with a few highlights.

Charles H. “Chuck” Cooper, who attended Duquesne on the post-World War II G.I. Bill and played for the 1946-50 Dukes, was the first African American drafted by an NBA team. The Boston Celtics spurned the prejudice of the times to choose him in 1950. Cooper then joined Earl Lloyd and Nat “Sweetwater” Clifton, picked later in that draft by other teams, as one of the first three to play in the NBA.

Duquesne during the 1950s also became—and still is—the only college to produce two consecutive overall no. 1 picks in the NBA draft. Dick Ricketts, a burly forward, went first to the St. Louis (now Atlanta) Hawks in the 1955 draft, and versatile swingman Sihugo Green was drafted first overall by the Rochester Royals in ’56. Both had solid careers, though Green is oft known today as the answer to a trivia question: He was the guy picked right before the Celtics chose the all-time-great center Bill Russell.

And one final capper. Duquesne won the 1955 National Invitation Tournament in New York, beating Dayton 70-58, at a time when the NIT was still on a par with the rival NCAA Tournament in quality and prestige.

Those days are gone. The world turns; the wheel of basketball fortune spins—and for two days this month, it’s going to spin mighty spectacularly in our town.

Mike Vargo, a Pittsburgh-based freelance writer, normally covers theater for Entertainment Central, but he enjoys hoops and hoops is theater.