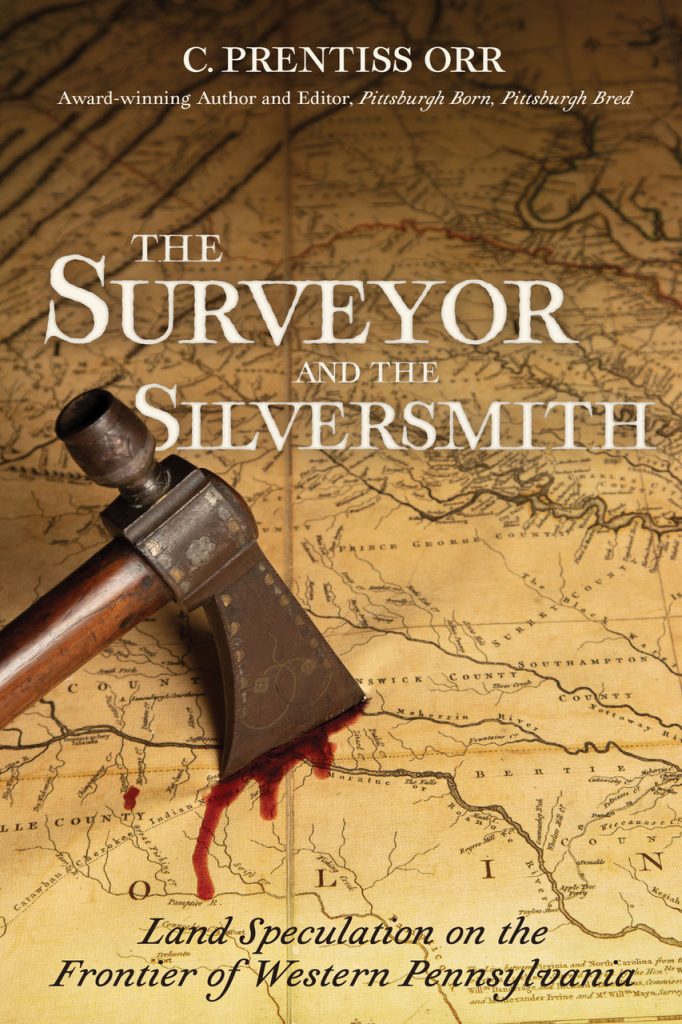 In The Surveyor and the Silversmith: Land Speculation on the Frontier of Western Pennsylvania, Pittsburgh author C. Prentiss Orr takes readers on an amazing historical journey.

The story follows two Colonial American figures, David Leet (the surveyor) and Thomas Shields (the silversmith), as well as their descendants through some of the most interesting periods in our early history.

The journey for both men begins in Philadelphia in the mid 1700s. Leet’s family would move to the wilds of Virginia where, at a young age, he learned the skills of the surveying profession. With vast and unchartered land to be settled (despite common knowledge that these lands for centuries were protected by and for Native Americans), Leet explored hundreds of thousands of square miles few white men had ever seen. 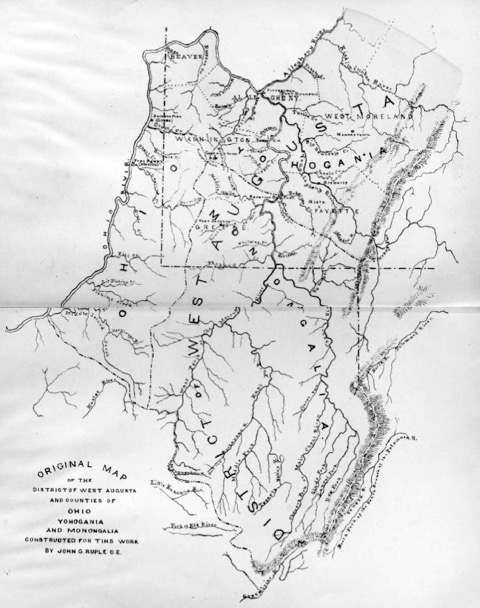 Surveying was an important first step in the legal process of owning land. It was both dangerous and complicated. In the 1700s much of the same land was claimed by both Virginia and Pennsylvania. Hungry to earn unfound wealth, land speculators descended on newly created maps, purchasing tracts they would never see, but hoped to resell at great profit to European investors. As in any new industry, there were few winners, and many more losers. Despite endless treaties to appease the many tribes west of the Alleghenies, the near-constant threat of attacks from Native Americans challenged the speculator’s arrogance. There was a continuing cycle of violence and retribution between the settlers and Native Americans, with each side committing atrocities. Major conflicts include the Paxton Boys’ uprising, Hannah’s Town, Gnadenhütten, Crawford’s Defeat at Battle Island, and more. Orr shares much of this horror.

A European depiction of a Delaware Indian, a member of the Leni Lenape who considered themselves to be the “original” people. The Moravian missions hoped to Christianize the Delawares, but that effort led to horrendous genocide.

Contemporaneously, Thomas Shields apprenticed as a silversmith in Philadelphia and was so adept at the trade he opened his own shop. Today, his works can be found in many museum collections. Looking to use his profits, Shields bought northern and western land tracts at somewhat haphazard auctions in Philadelphia. In fact, both Shields and Leet would come to own prized parcels of land in western Pennsylvania. Whether or not they had known each other before, curiously, the silversmith sold his best land indirectly to the very surveyor who knew exactly what he was purchasing. This was the beginning of Edgeworth and Sewickley, Pennsylvania..

Curiously, too, one of Shields’s sons, David, came west regularly with wagons of much sought after goods from Philadelphia to sell in Western Pennsylvania. His business skills as a merchant were becoming well known and he soon transacted large volumes of business with the Harmonists. The industrious Christian commune produced high-quality wool and silk items among other products. The younger Shields, with a partner, even opened a store in Pittsburgh. 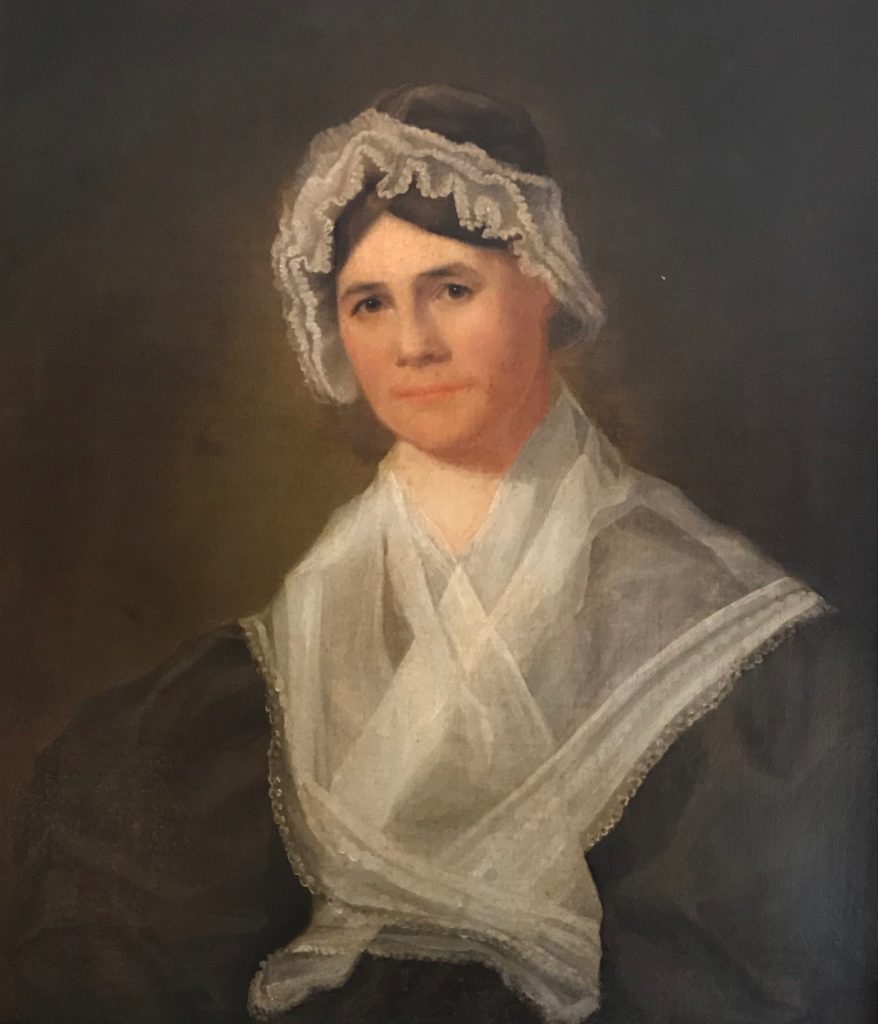 Eliza Leet, Daniel’s only child, married David Shields in Washington, PA. Later, they built a plantation on the land in Edgeworth that her father earlier surveyed for veterans of the Revolution, but then purchased for himself.

The Leet and Shields family were joined together in 1803 through the marriage of David Shields and Daniel Leet’s only child, Eliza. They and their descendants and relatives would make a positive impact on Sewickley, Leetsdale, and Edgeworth. Leet’s and Shields’s grandsons, David Leet Shields and Will Shields, later served heroically in the Civil War. David was wounded; Will gave his life for the Union cause..

By following Leet and Shields and their descendants through the 1700 and 1800s, The Surveyor and the Silversmith tells us much about life in the early years of our burgeoning nation. But Orr takes us on several historical side trips that not only provide important context, they are just plain fascinating. We learn about Leet’s early explorations with George Washington, his experiences building out Valley Forge, the missionary Moravians, the industrious Harmonists, early steamboats, Pittsburgh’s first railroad, and the ever-charming Civil War hero General Alexander Hays. Of course, the early days of Sewickley, Edgeworth, Washington and Beaver are just as fascinating, too. 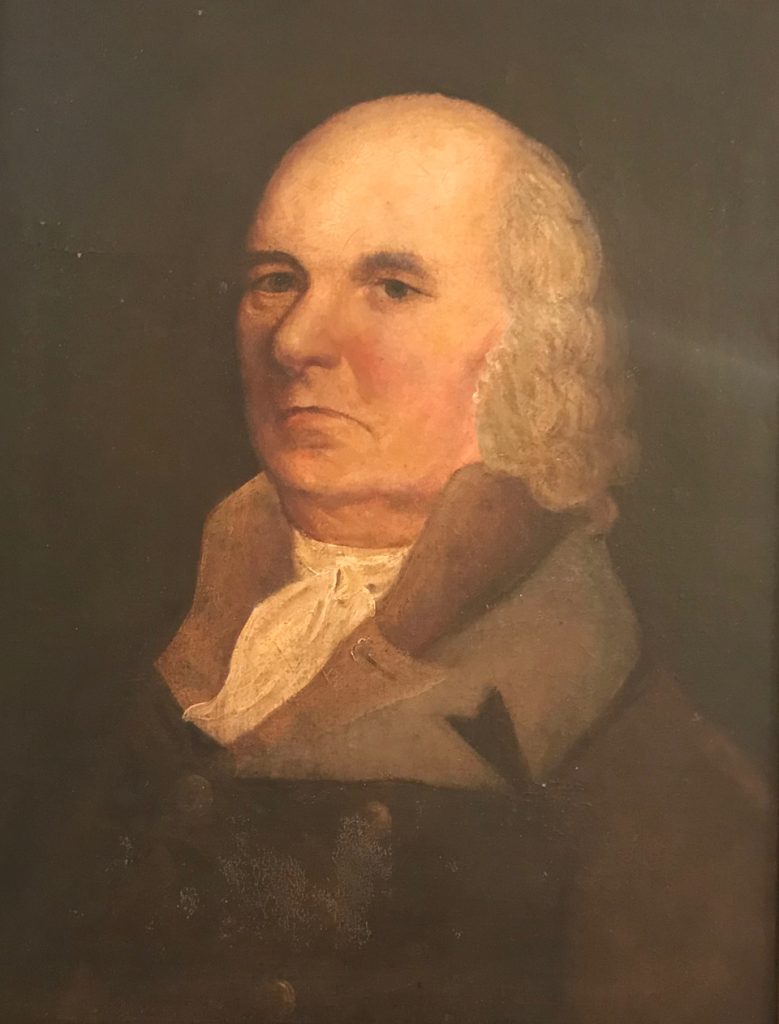 Daniel Leet, surveyor to George Washington, was seemingly entrenched at every turn in the American Revolution, building out Valley Forge, several important forts, and leading hundreds of men to safety from Crawford’s Defeat in the bloody Sandusky plains of Ohio.

Orr’s narration is lively, honest, and when appropriate, humorous. The subtitle of the book should however be changed to reflect the broader historical quest Orr takes the reader on. For serious Pittsburgh history buffs and those just looking for an interesting read, there is no need to look further. The Surveyor and the Silversmith provides both history and fun. The book was first commissioned to tell the story of  Shields Presbyterian Church in Sewickley. However as the story developed, Orr was encouraged to give a broader historical view, one citing the national significance of events leading to its own history. Orr has very competently achieved both missions.

Orr’s historical research took him to Philadelphia, Moundsville, West Virginia, many sites in Ohio, and dozens of historic locations in western Pennsylvania. One thing that Orr said kept popping up in his research and travels was the uncanny preponderance of the Great Indian mounds built thousands of years ago in many of the same places detailed in the book.

The Surveyor and the Silversmith runs 437 pages plus bibliography and index. It’s an easy read with short chapters and many illustrations. It comes in softcover ($28.95), hardcover ($34.95), and Kindle ($19.95) editions. Explorditions is the publisher of the book.

The Surveyor and the Silversmith is available through your favorite local bookstore, Barnes & Noble, and online at Amazon.