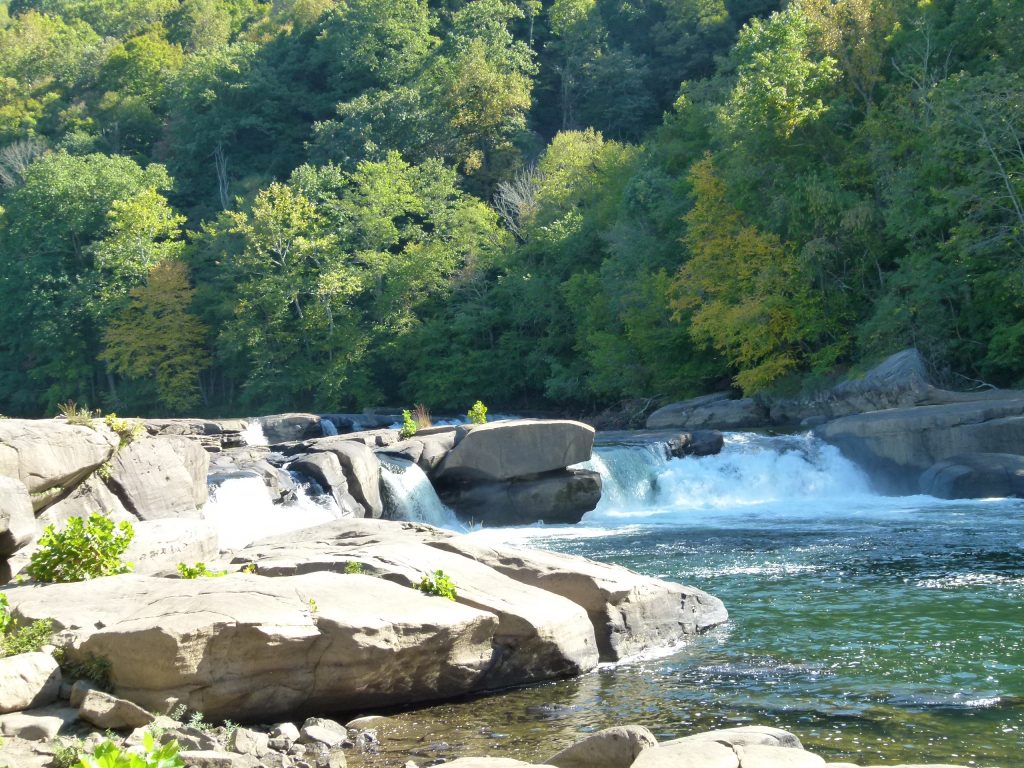 Once or twice a year I travel to Morgantown, West Virginia to have lunch with a business associate, Sarah. Then, if I have the time, I will go for a hike at a West Virginia Park.

It was a beautiful sunny day with the temperature near 80 degrees. I exited I-79 near Fairmont, following the signs to the park. I drove for about 15 to 20 minutes east on State Route 310, through the rural community of Quiet Dell, until the sign for the park pointed toward a smaller road. It took me past Rock Lake, around which there was a small gathering of homes. The road then enters Valley Falls State Park and descends into the valley.

As you descend you pass several named hiking trails. The road ends at the bottom of the hill on the valley floor. At the termination there are a few small buildings for seasonal food service, picnic areas, bathrooms and parking lots. There once was a community here that sprung up alongside a lumber and grist mill.

To get to the falls, cross a footbridge over the B&O Railroad tracks. As you do the falls emerge in all their glory. There are several falls of small to medium size spread across a wide gorge of the Tygart River. The beauty of these falls is not in their height, but that there are several of them in a horizontal row with the water flowing forcefully from one massive slab of rock to a lower plate. They are rocky waterfalls with large boulders strewn about. The Tygart River features clean water with a slight blue-green color and some white water. It joins with the West Fork River at Fairmont to form the Monongahela River. 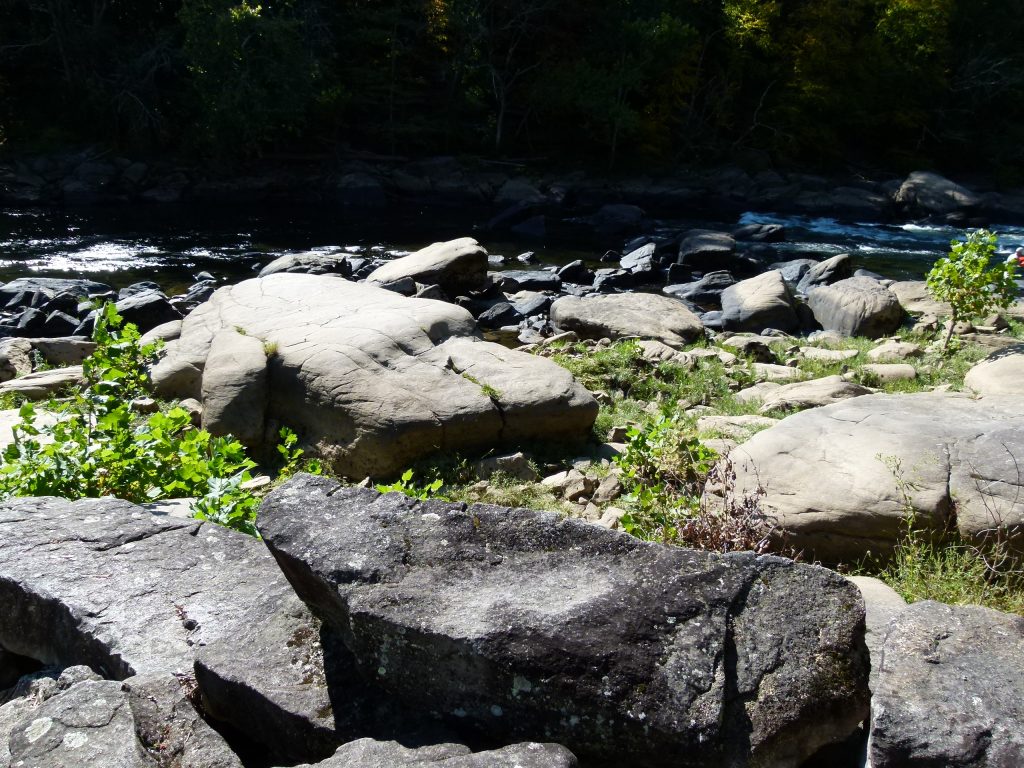 Large boulders are numerous along the river banks.

There are many big mostly flat surfaced boulders one can walk on to get a closer view of the falls. Several signs warn visitors that the rocks can be slippery and to be cautious. Fortunately, there are also a few vantage points from which to view the falls without climbing on the boulders. One such place even has a bench to sit on. 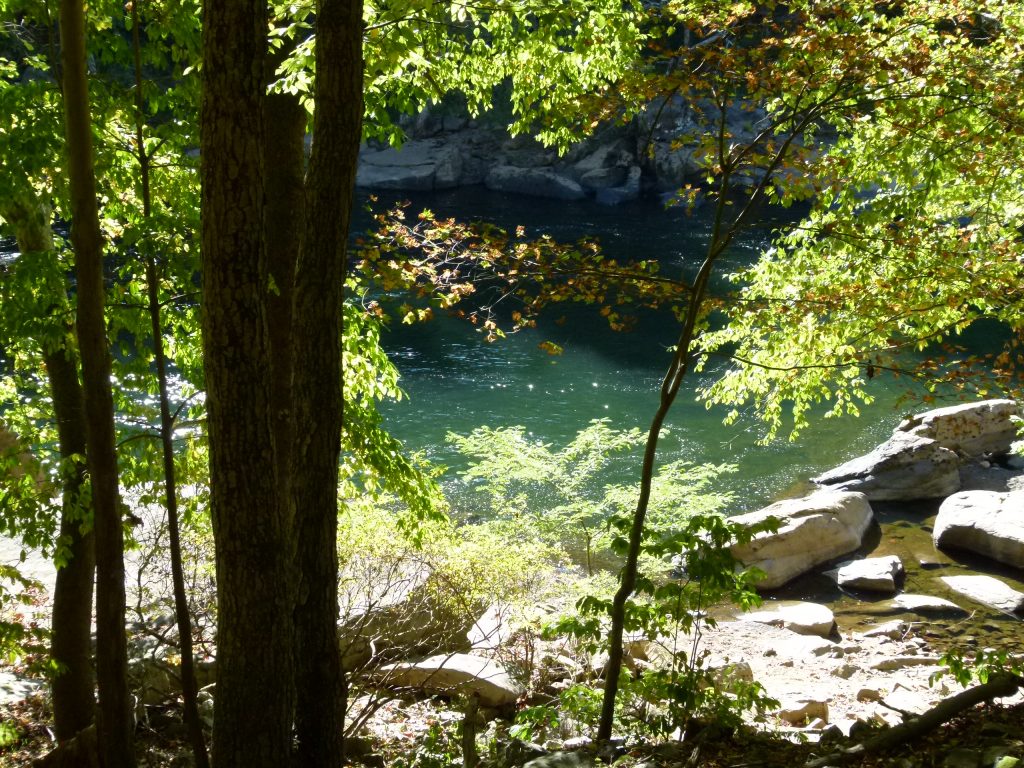 A view through the trees of the river from the Tygart Valley (River) trail.

Valley Falls also offers a variety of hiking trails of different lengths and degrees of difficulty. Always up for a good hike, I started on the Tygart Valley  (River) Trail, a short trail. It ran smoothly for most of its run as it passed by the foundational remains of the old grist mill. There’s even a water channel cut into the rock that probably brought the water to the mill. After a while the trail, if it was still the trail and not an offshoot path, became more rocky and difficult as it followed the river. I stayed on it until a big rock blocked the path and the only way to go forward would have been to squeeze through a space between the rock and another rock or to climb up and around it. With no good way to get around I backtracked and cut up to the Rhododendron Trail. 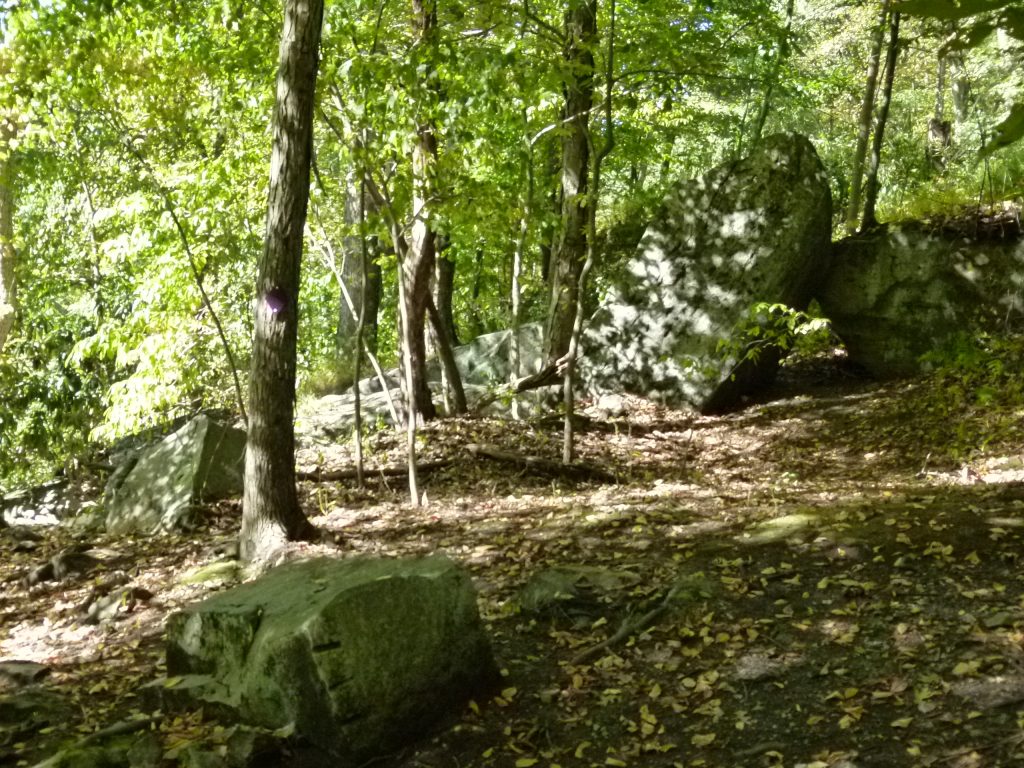 Looks like the endpoint for the trail unless you crawl under the two rocks or climb up and around them. To the left of the big rocks is a rocky slope that descends to the river.

Rhododendron trail is a wide, relatively smooth trail, almost like an unpaved road. After my difficult end on the previous trail, the easiness of it was refreshing. It gave me more time to soak up nature. I could hear the river running down below and the calls of various birds. I even saw two large rhododendron shrubs. After a gorgeous hike I returned to my Jeep and started back on my trip north to Pittsburgh. 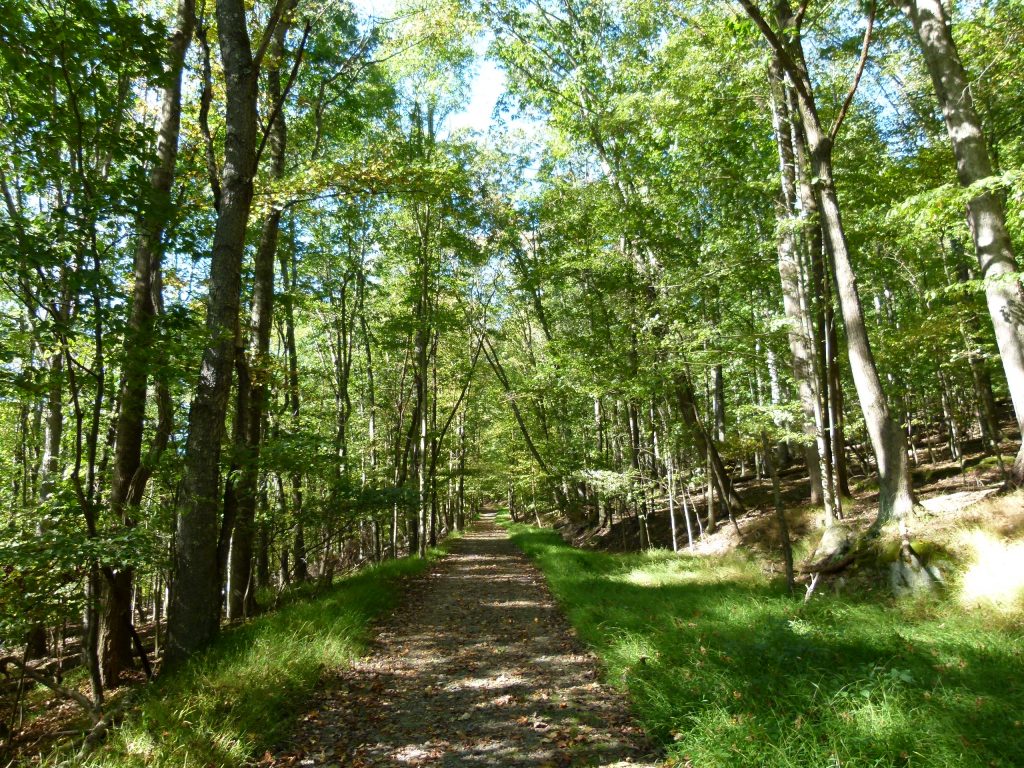 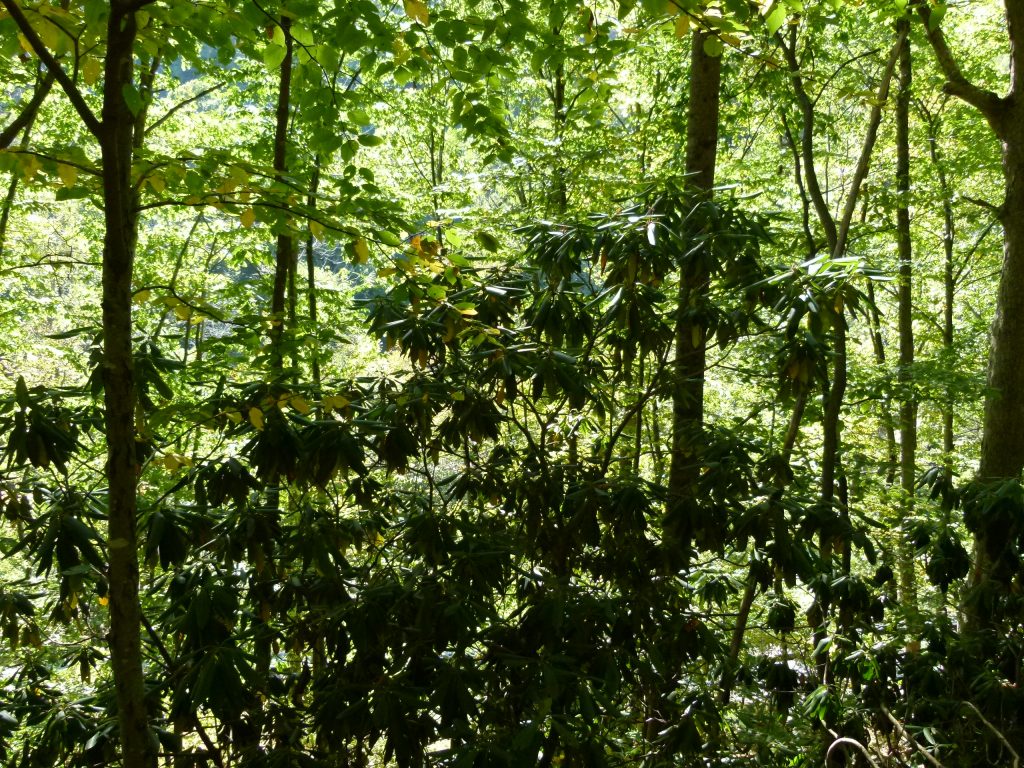 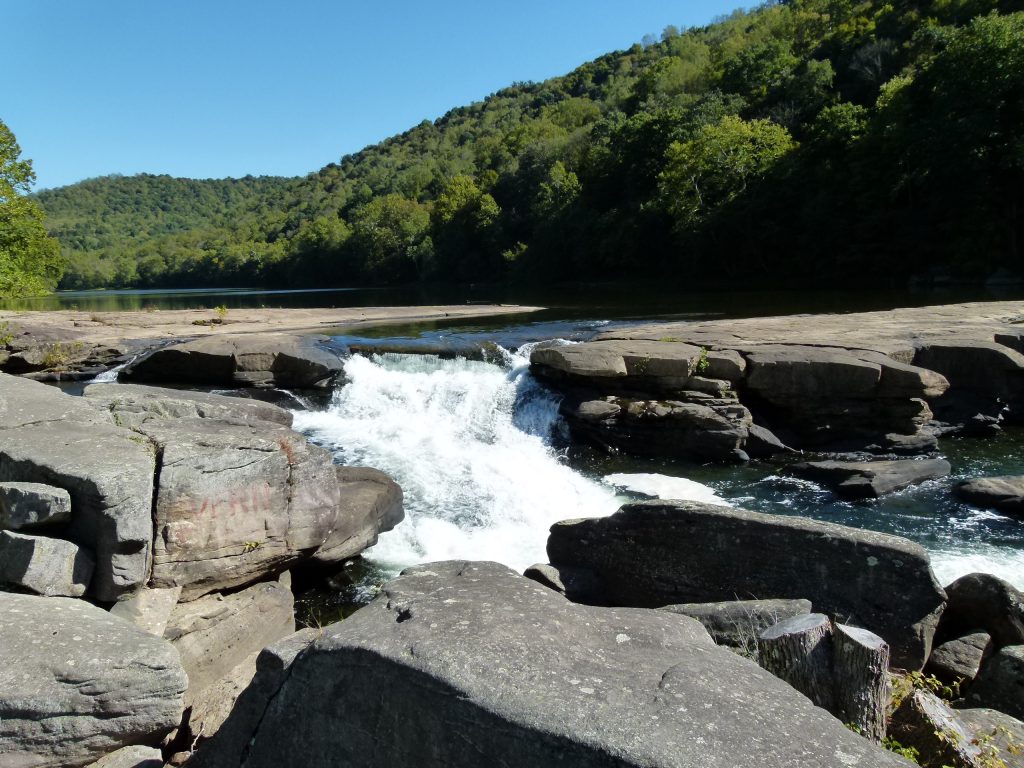 The middle waterfall is powerful too.

Story and photos by Rick Handler, the executive producer of Entertainment Central and an environmentalist.