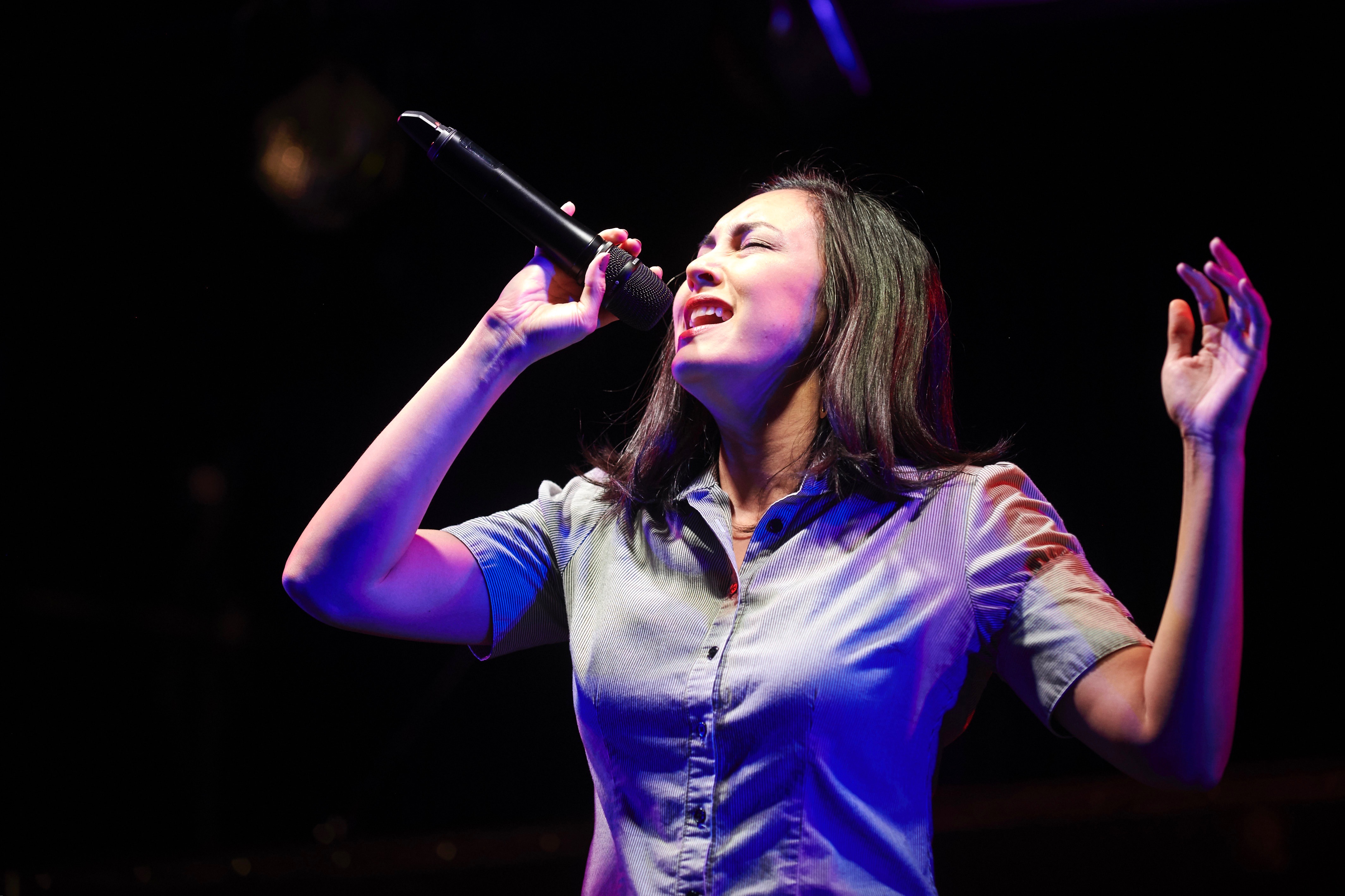 People go to the theater for many reasons, to see different kinds of plays. Cambodian Rock Band, at City Theatre through October 6, is at least three kinds in one.

It is a social-issue play, about the reign of terror and state killings in Cambodia during the late 1970s. The topic has a chilling relevance today, when we’re seeing the rise of autocratic populism in many countries. Cambodian Rock Band is also an interpersonal play. By highlighting a handful of characters and the back-and-forths between them, it generates psychodrama—along with a surprising amount of goofy comedy. Third, as the title implies, this is a play with music. In a sense you could even call it a play about music.

What’s wonderful is how deftly playwright Lauren Yee has interwoven all the moving parts. Watching it reminded me, at times, of an orrery—one of those little mechanical models of the solar system that shows the planets and moons revolving together. The difference is that the characters in the play are revolving around each other in dances of life or death. Human systems don’t run in clockwork harmony. They’re wobbly and imperfect, like we the people who make them up. Cambodian Rock Band captures this, as it depicts a troubled society flying far off the edge.

And the humorous bits, believe it or not, work well. Absurdity can be laughable at the same time it’s awful. The play deals in absurdities that actually, awfully, happened.

Cambodia borders Vietnam. In ancient times it was home of the Khmer Empire, which ruled much of Southeast Asia. By the time of the U.S.-Vietnam war, Cambodia was a former French colony likewise fought over by pro-Western and communist factions. In 1975 the Khmer Rouge rebels took the capital city, Phnom Penh. Under party leader Pol Pot, a.k.a. “Brother Number One,” they launched a strange and ghastly regime.

1975 was renamed Year Zero. The declared intent was to remake the country, from scratch, as a self-reliant socialist utopia. But the program to create the utopia mixed bizarre theorizing with extreme nationalism and sheer brutality. Money was outlawed; there’d only be barter. Also taboo were any artifacts of Western or foreign influence—including modern medicine. The Khmer Rouge closed hospitals. Uneducated working-class heroes would develop purely Cambodian forms of treatment, in part by learning surgery on enemies of the people.

As for the enemies: They were everywhere, especially in the cities, hotbeds of elitist decadence. Residents of Phnom Penh were force-marched to the countryside to work at farming and rural labor, in which they proved as clueless as peasants removing kidney stones.

And of course many had to be killed, so many that sometimes large groups were buried alive, to save bullets. Targets included: intellectuals (easily spotted if they wore eyeglasses). Ethnic minorities and people with foreign connections. Buddhist monks, or anyone practicing religion. Plus malcontents, slackers, question-askers, and children of those killed, lest they seek revenge when grown.  From 1975 until the regime’s end in 1979, an estimated 2 million perished, about one in every four Cambodians. Most who performed the killings were rural folks—some eager to be avatars of the new order, and some seeing that the deal was to join or die. 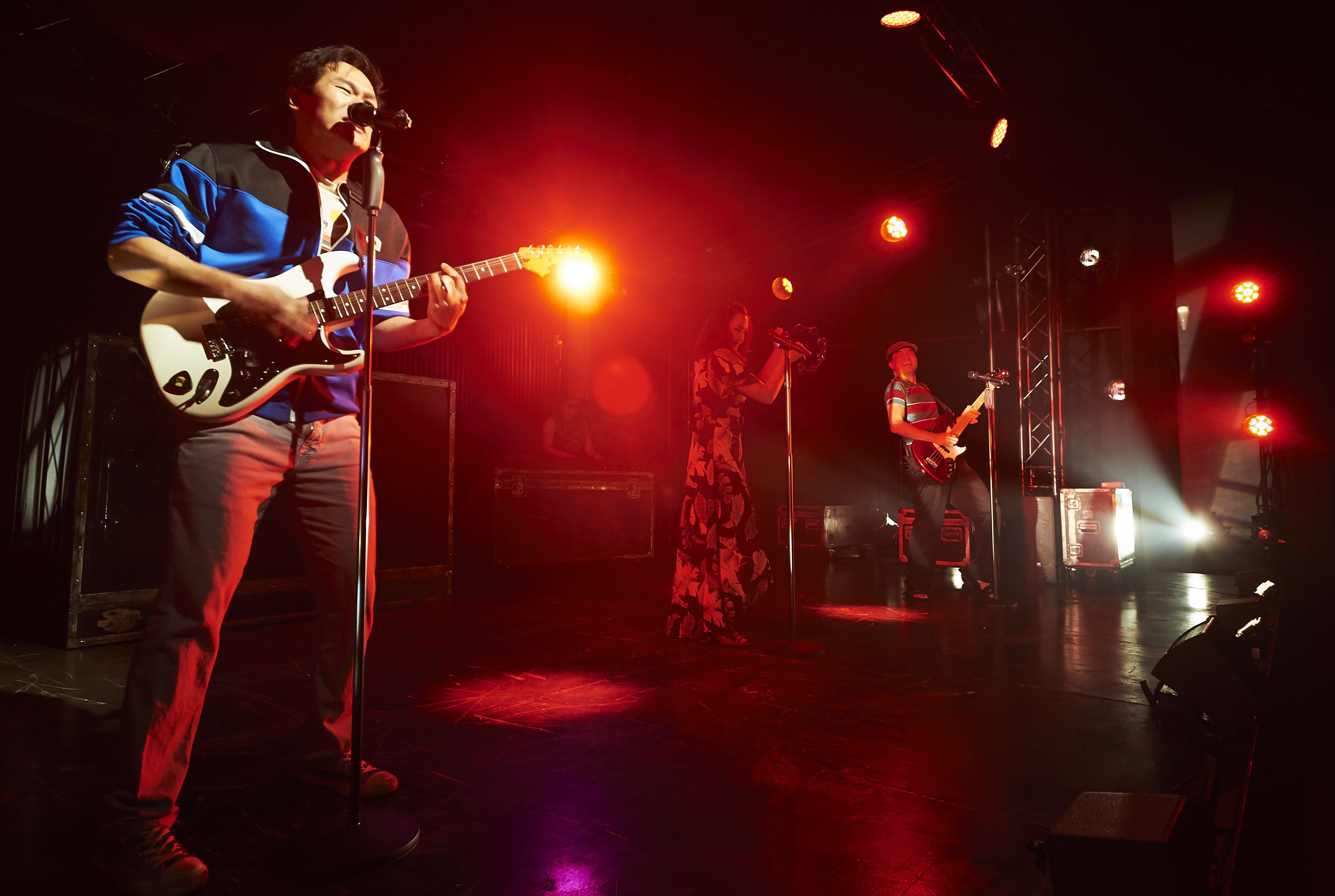 Enter Daughter and Dad, with Laughs

Cambodian Rock Band begins at a time near the present. A young woman named Neary (played by Aja Wiltshire) is the U.S.-born daughter of Cambodian refugees who escaped the worst. She’s in Cambodia on a personal mission, working with war crimes investigators to nail a former Khmer Rouge officer who oversaw the murders of thousands. Then a surprise visitor turns up. Her father, Chum (pronounced “choom” and played by Greg Watanabe), has a counter-mission. He wants Neary to leave bad enough alone and build a proper career back in America.

Part of Chum’s strategy to that end consists of being a comically annoying dad. He drags Neary on a nostalgic trip to a Phnom Penh hotspot he loved long ago, the “fish spa.” It’s a place where you dangle your bare feet in a huge trough of water so the fish can nibble away the dead skin. The fish are not shown, but once you see Chum ooh-ing and squirming with delight at the footsy business, you can’t unsee it.

Dad further has a talent for insightful wisecracks. In a scene with Neary’s boyfriend and fellow investigator, Chum tells him he should forget the past and work on present injustices, like the racket that sucks girls into sex trafficking. When the young man admits the practice is “unfortunate,” Chum snaps at this attempt to distance the problem. Pointing a hand, he says, “It’s not ‘unfortunate.’ It’s right over there.”

Now things are getting serious. As Neary keeps investigating the past, Chum explodes, saying she couldn’t possibly know what the Khmer Rouge nightmare was really like. From there, we’re into an extended flashback.

The Khmer Rouge did not rock. Music of any type was contraband and musicians were infectious parasites. After the band members do a rousing eve-of-destruction number—punctuated by sounds of the city’s bombardment—they scatter. One lands in the notorious S-21 prison, where, amid torture, he’s grilled on his subversive activities. The touches of humor here are infrequent and dark. (Band guy tries explaining that he wasn’t the creative leader, only the bass guitarist, laying down bass lines for songs composed by others. His interrogator smirks: “Ah. Just following orders?”) 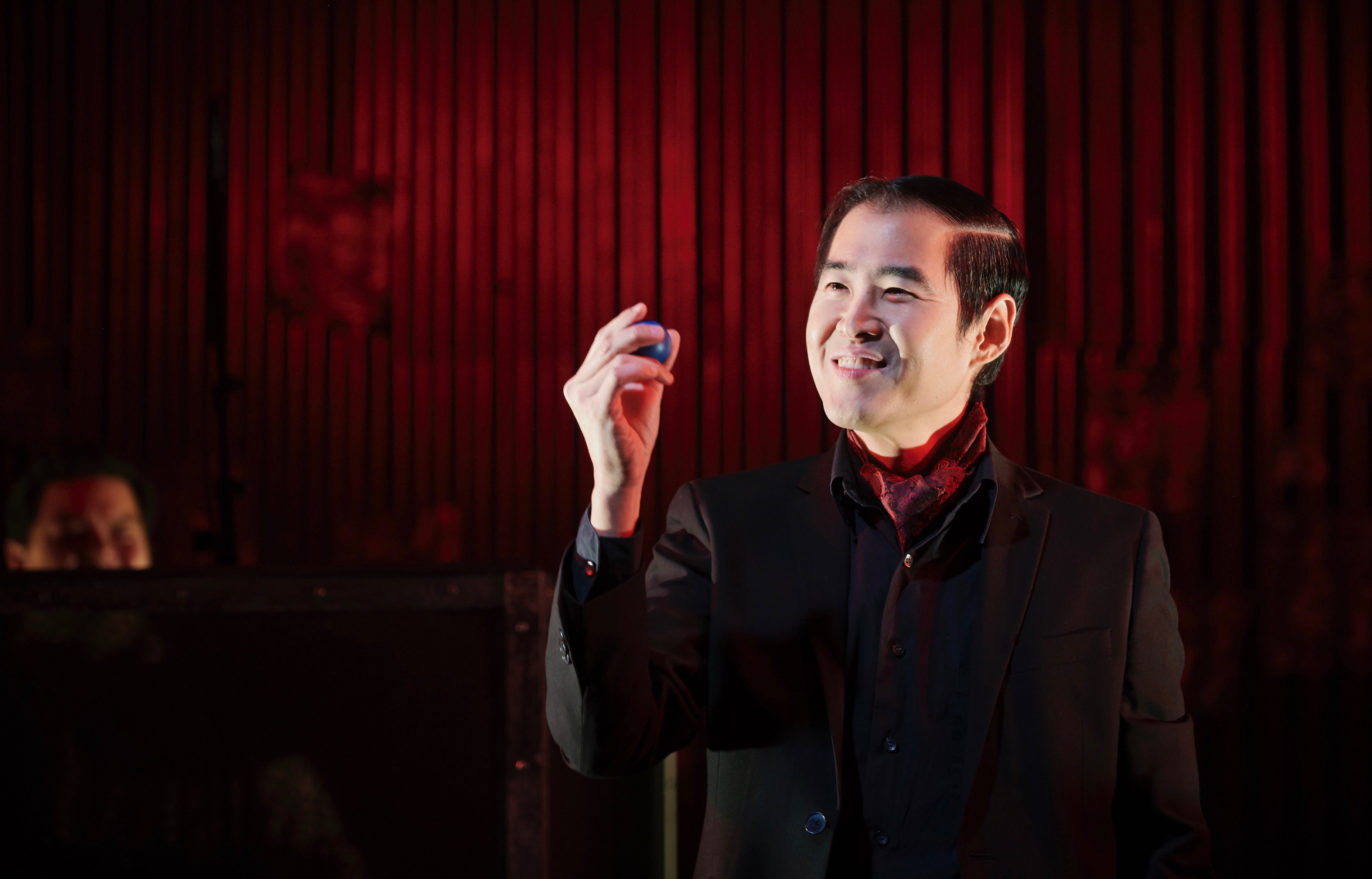 Comrade Duch (Albert Park) is a villain who commands the spotlight.

The entire flashback sequence is hair-raising, and full of unexpected twists. “Gimme Shelter” isn’t in the soundtrack but could well be the theme. The flashback also features another key character, Comrade Duch (pronounced “doik” in the play), head of the prison. In future time, Duch is the war criminal that Neary and her colleagues want to bring down. The playwright wrote him as a nuanced villain—engaging, witty, but bad—and actor Albert Park plays him exactly so.

All cast members shine. Some play multiple roles due to the time-switching, and it works. I did have two beefs about Cambodian Rock Band. It could be a bit tighter—the musical numbers, which bracket the show as well as being part of it, contribute to a two-and-a-half-hour run time with intermission. And to my own surprise, I did not care much for the music. The songs are credited to Dengue Fever, a fine American band that does covers of Cambodian originals and new songs inspired by them. Yet the tunes in the play felt heavy and hard, missing the lilt and vibrance I’ve heard in Dengue Fever recordings. The play’s musicians are the actors and vice versa (there’s no separate band), and they’re not working with the same range of instruments Dengue Fever has used, so those could be factors.

But my coolness to the tunes is a subjective take; I talked with playgoers who dug the sounds. And the play is among the ones that can’t be judged on the conventional good/bad, how-many-stars-should-we-give-it spectrum. Cambodian Rock Band is a singular event: a show to be experienced if you care about theater. It gives you an unusual treatment of a very tough subject. The story will pull you along as it evokes the dilemmas and ironies faced by people caught in a nation’s whirlwind.

In real life, Comrade Duch is now 76, locked up without grounds for appeal. The real Ros Serea Sothea vanished in the tumult. She is presumed dead but lives on in a play you may want to see.

Lauren Yee’s Cambodian Rock Band is co-presented by City Theatre with Victory Gardens Theater of Chicago, where it played recently, and Merrimack Repertory Theater in Lowell, Massachusetts, where it’s headed next. The play is directed here by Marti Lyons. Cast members not mentioned by name in the review are Eileen Doan, Christopher Thomas Pow, and Peter Sipla. Each performs superbly. Through October 6 at 1300 Bingham St., South Side. For tickets and further information, visit City Theatre on the web or call 412-431-2489.