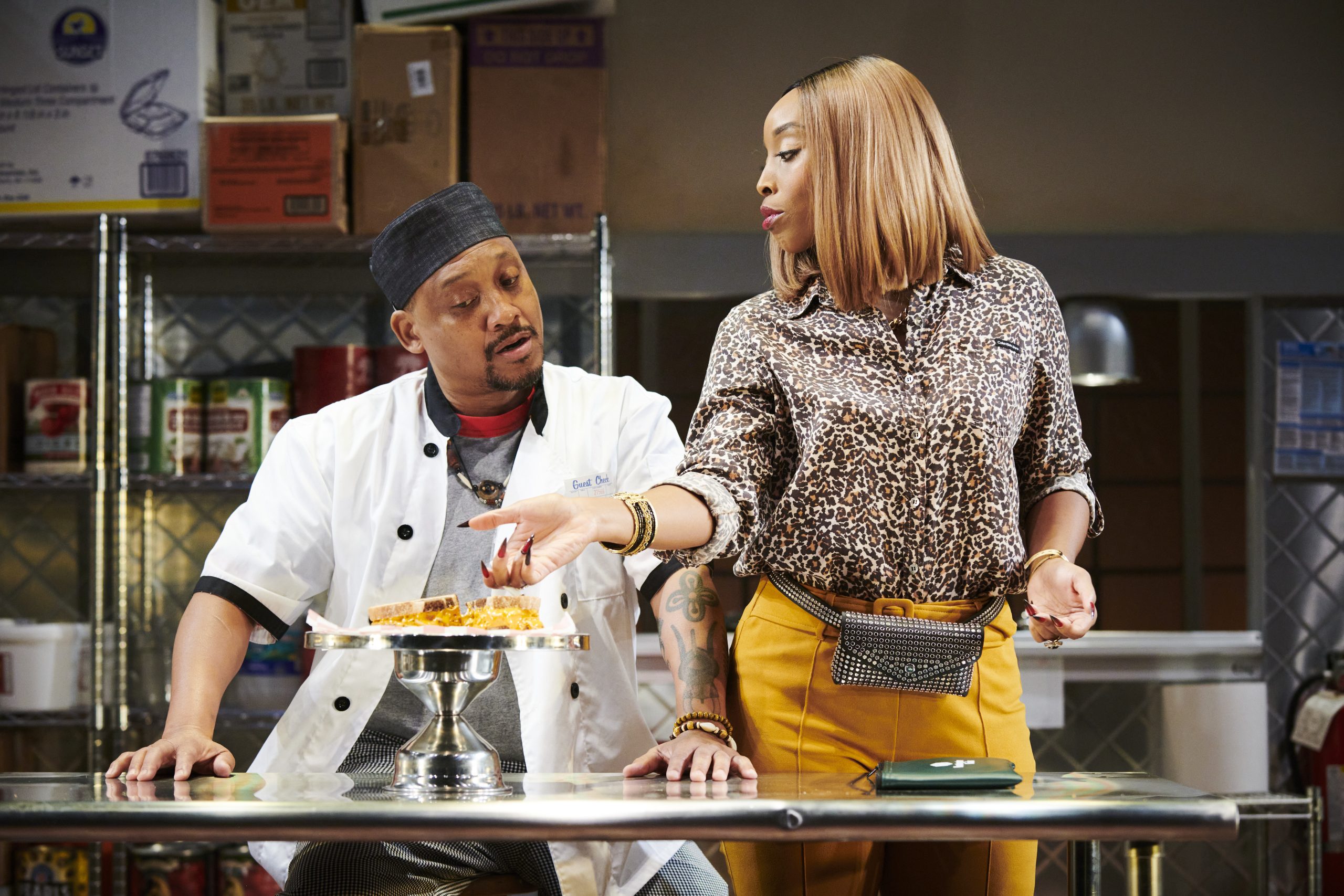 This review is being written while the reviewer eats a humble ham-and-cheese sandwich on white bread, so it probably won’t be as good as the play it’s about. Clyde’s, by Lynn Nottage, runs in a riotous production at City Theatre through October 16. What you get is a seriocomedy packed with layers of both substance and sizzle.

On more than one level, the characters in Clyde’s act out a morality play: good versus evil. High aspirations versus mind-crushing conformity. Art versus the art of the deal. Moreover, the moral messages come in forms that Cotton Mather couldn’t have imagined. They are be-bopped and hip-hopped, in language that may often make you laugh out loud, and in rhythms that make you want to get up and dance.

All of this takes place in an unlikely setting: the kitchen of Clyde’s Sandwich Shop, a fictional eatery at a truck stop. It is not clear why the woman in charge is named Clyde. But actress Latonia Phipps, slithering in and out of scenes like a queen cobra, shows quite clearly that Clyde is a boss from Hell. Or maybe from Mordor. Her heartless cruelty leads employees to suspect she might be inhuman. Asks one, “Have you ever seen her eat?”

Clyde’s antithesis is the senior member of the kitchen staff, Montellous (Khalil Kain). The others see him as a sage-like mentor, “a Buddha from the ‘hood.” To Montellous, the making of sandwiches is a sacred art. He inspires his younger colleagues to do as he does—dreaming beyond the limits of Clyde’s mundane menu, envisioning and making sandwiches that induce transcendental bliss.

The Soul of Food, the Dilemma of Captives

You know you are not in Kansas when Montellous delivers his ode to the sandwich. He opens by reminding the crew that the ingredients, whether animal or vegetable, came from the earth amid sunshine and rain. When merged creatively in a sandwich, they embody “the fullness of growth,” he says. “From the soil, to my hand, to a stranger’s mouth. Being able to awaken a new sensation.”

A sandwich, he continues, is “the most democratic of all foods. Two pieces of bread, and in between, you can put anything you want. It invites invention! And collaboration. … I’m thinking about how the ingredients come together … and then finally, how to achieve oneness with the sandwich.” Montellous presents his latest creation, intoning solemnly: “This sandwich is my strength. This sandwich is my victory. This sandwich is my freedom.”

The last statement hits home, because everyone at Clyde’s, including Montellous and Clyde herself, is someone who’s done time in prison. And Clyde does not hire the recently released for humanitarian reasons. In her view, they are ideal minions. There’s little chance they can find a better job, and they’ll put up with her for fear of getting a bad report. She figures she has a racket that moves the suckers from one mode of captivity to another. 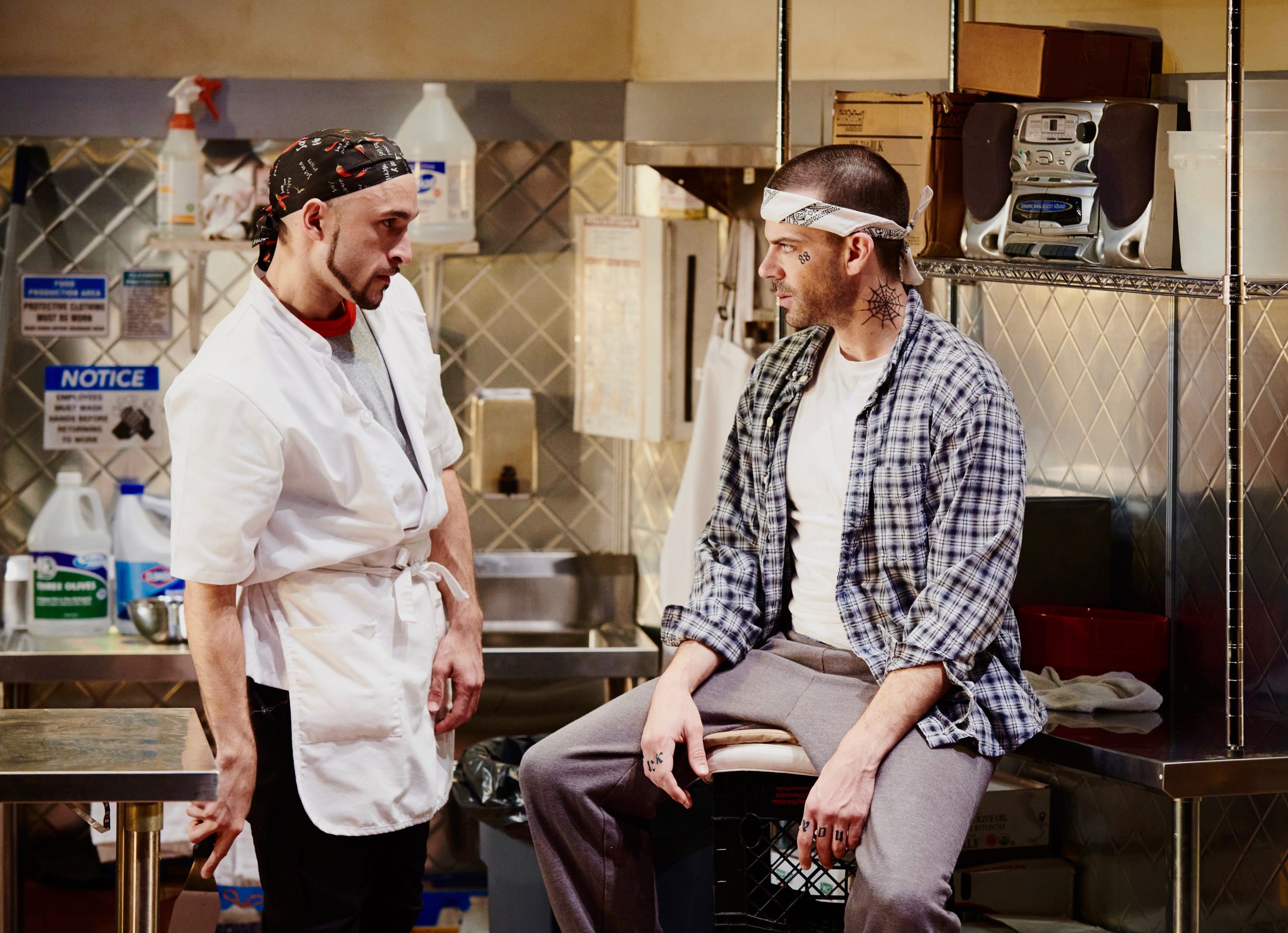 The catch is that the suckers are persons, not pawns. Rafael the line cook (Jerreme Rodriguez) and Letitia the food-prep specialist (Saige Smith) are in fact rather feisty persons. They don’t dare to be outright mutinous but they’re quick to dance, chatter, and play whenever the cobra’s away, which Clyde frequently is, dealing with customers out front. During the show, Rafael and Letitia are joined by a new guy, Jason (Patrick Cannon). He comes across as a more ominous type. Jason did his time for a violent crime, aggravated assault. He copes with the indignities of menial kitchen work by trying to keep a lid on whatever’s within him, throwing off a hard-shell, don’t-hassle-me vibe, like a snapping turtle.

Thus the dramatic tensions are set in motion. Who will crack first and who will prevail? On the one hand, Montellous’s enlightenment project is gaining momentum. Yet, as the young crew members (even Jason) begin to find and express their finer selves through sandwich creation, Clyde hisses her disapproval. It’s a waste of time, she insists. In her eyes, a truck-stop diner is a place where the truckers are suckers, too, content to be fed Velveeta and ketchup. In a stormy scene, Clyde reveals that she actually doesn’t want the sandwich shop to become a beacon of excellence. Her “investors”—whoever they are—like to keep a low profile. What’s up with that? The frightening female ex-con wouldn’t be part of a larger con, would she?

Booties and the Beast

Serious stuff. Open to layers upon layers of interpretation. But let’s not go there now, except to note one thing. Clyde’s has been hailed for humanizing those who’ve been behind bars, depicting them as people whose better or worse qualities can be brought out depending on how they’re treated. But the play also serves as a metaphor for any miserable workplace that caters to a miserable system. At one point the young kitchen workers get up the nerve to sort-of confront Clyde about her management style. Why does she have to be so mean? Her reply: “This world is mean. I’m just in it.” Although the world can be very nasty, that is a rationalization used by every soul who chooses to exploit or terrorize the world instead of trying to improve it. 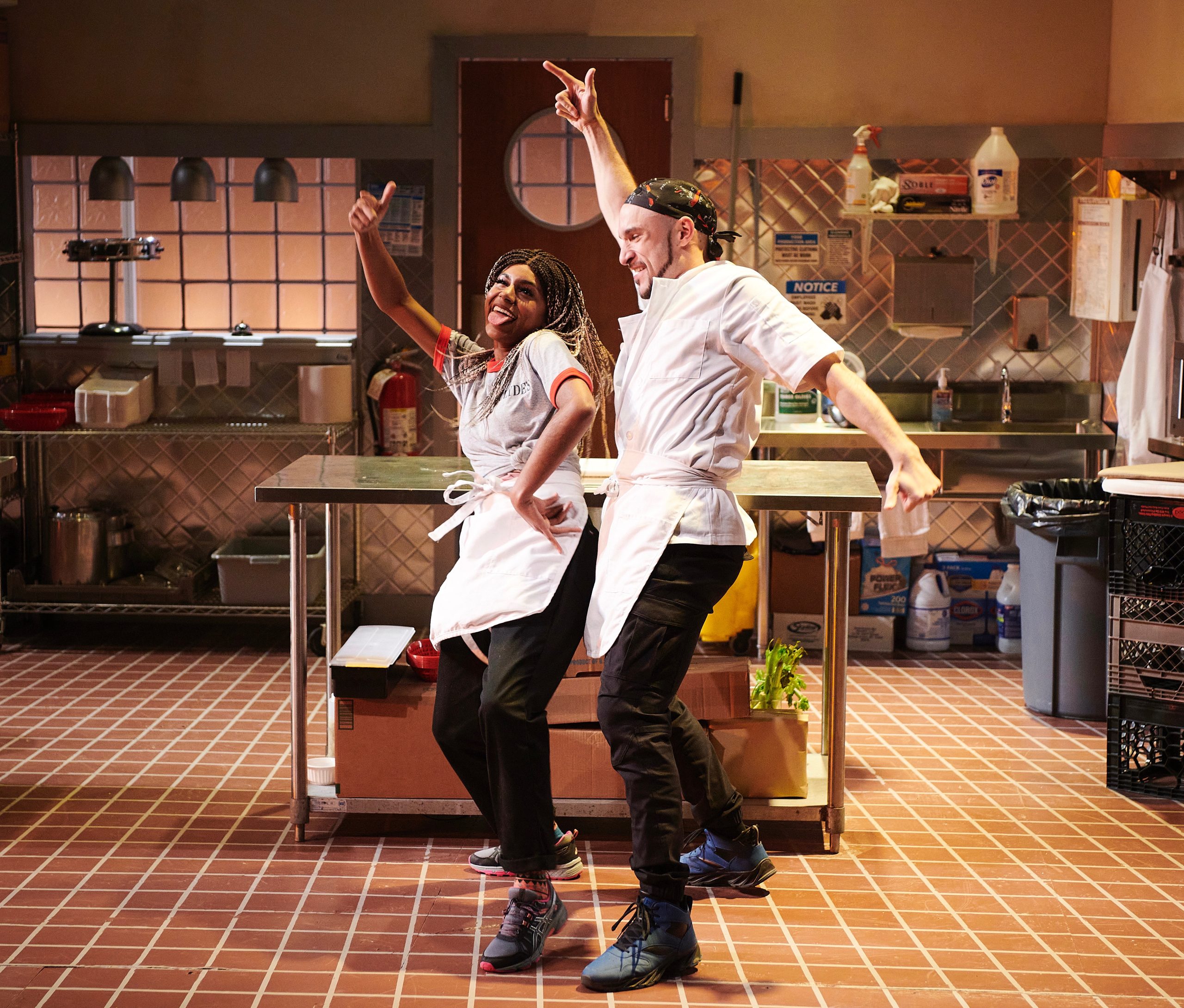 Booties are meant to be shaken. Here, we can detect a shimmering force-field of attraction between Letitia (Saige Smith) and Rafael, which evolves into one of the play’s several subplots.

The beauty of Clyde’s is that it doesn’t beat you over the head with such moralizing. Au contraire, my gourmet friends. The play riddles your funny bones with zingy repartee. It dances into realms of comical absurdity. And though it is not a musical, it’s got rhythm all the way through. Even when they aren’t literally dancing, the actors move like dancers—snaky and sinuous (that’s Clyde), or prancing with exuberance, always letting their bodies speak what their lips are saying. The play’s dialogue has infectious rhythms as well. Many lines are almost chanted or sung. Letitia, for instance, describes her dream lover as “A guy who has a two-car garage, a house with central air, and a full-time job—job job job.”

Today there are many plays that address weighty issues. Clyde’s stands out for its ability to turn the trip into a joy ride. The ultimate suspense lies in whether it will romp to a happy ending. As one character observes, “You never know what you’re going to do when you meet the devil at the crossroads.” I suggest visiting the crossroads to see what happens.

Clyde’s, a new play by two-time Pulitzer Prize winner Lynn Nottage, is directed for City Theatre by Monteze Freeland, the company’s co-artistic director. He has guided the actors into being spot-on right for their roles. Tomé Cousin, intimacy coordinator and choreographer, must be credited for the working with them on movement. Tony Ferrieri gets a major shout-out as director of production and scenic designer. Clyde’s stays up through October 16 at 1300 Bingham St., South Side. For tickets and details, visit City Theatre on the web or call 412-431-2489.

The play’s lighting designer is Jason Lynch, with sound by Twi McCallum and costumes by KJ Gilmer. Richard McBride is the dramaturg, Samuel G.C. Muñoz is the fight choreographer, and the stage manager is Patti Kelly.