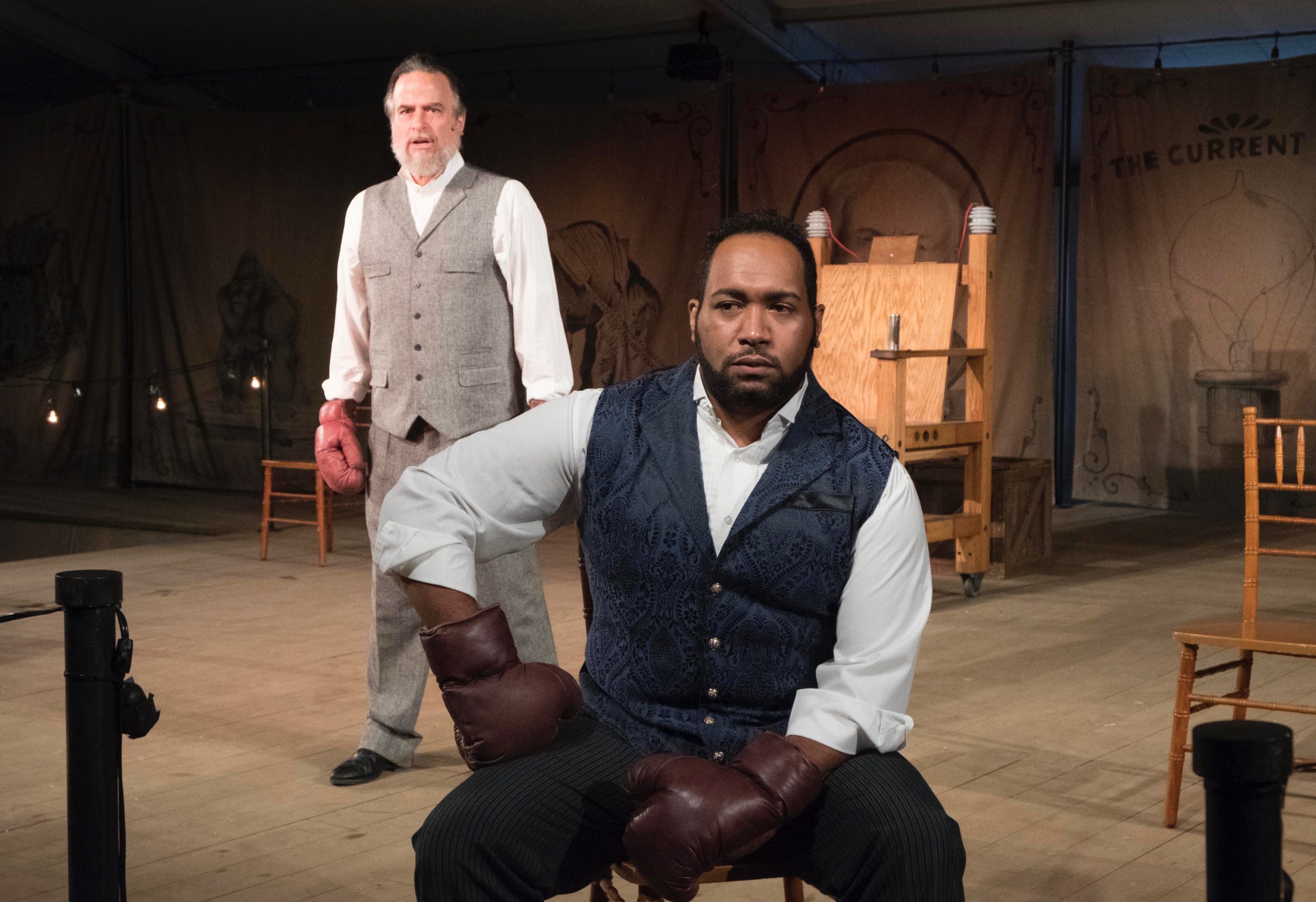 George Westinghouse—played by Billy Mason, front and center—ponders his next move in ‘The Current War’ while Thomas Edison (Daniel Krell) hovers menacingly.

Strange spirits are being summoned in Point Breeze North. When dusk descends over the grassy quadrangle called Westinghouse Park, where George Westinghouse’s mansion once stood, ghosts may drift across the lawn. And even stranger doings are afoot under the tent where Quantum Theatre is staging the musical The Current War (through June 27).

This world premiere, which marks Quantum’s return to live performance, is an unusual show to begin with. Rarely do we get a musical about the origins of electrical infrastructure. Yet that’s what writer-composer Michael Mitnick has given us. And though The Current War is grounded in historical fact—the actual techno-economic “war,” in the late 19th century, to decide whether America’s future electric grids would run on direct or alternating current—the show might best be appreciated with a bit of background from the realm of fantasy literature.

Tales of Good and Evil

Many fantasy tales make a distinction between two kinds of heroes. There are wizards who can bend the forces of nature to their will, and there are kings who conquer and rule. Thus, in British legend, we find Merlin and Arthur. In The Lord of the Rings, we have the good wizard Gandalf and the righteous warrior-king Aragorn.

Convention says that anyone who tries to combine the two powers—to be a wizard and also a ruler—becomes evil, because that person aspires to be God, which cannot be. Such was the fate of the dark lord Sauron in the Rings trilogy, and the wicked Voldemort in the Harry Potter books. They got what they deserved.

But what happens in real life? Is it possible to aspire to both wizardry and earthly dominion … and still be a good guy? During the late 1800s, in countries like ours that were rapidly industrializing, a breed of men arose who indeed aspired to both. They were inventor-entrepreneurs: arch-geeks who created seemingly magical devices, and who also founded great commercial companies to propagate their creations throughout the land.

Thomas Edison was one. A prolific inventor dubbed “the wizard of Menlo Park,” he aimed to build an electrical empire of cities and towns using his direct-current systems. George Westinghouse was another. The head of a Pittsburgh-based empire for manufacturing his railroad inventions, he jumped into the emerging electric industry as a champion of AC.

Spoiler alert! As you may know, the lines coming into your home today carry AC. Which means the good guy won. And that is really the theme at the heart of The Current War. What author Mitnick has written is a musical morality play. 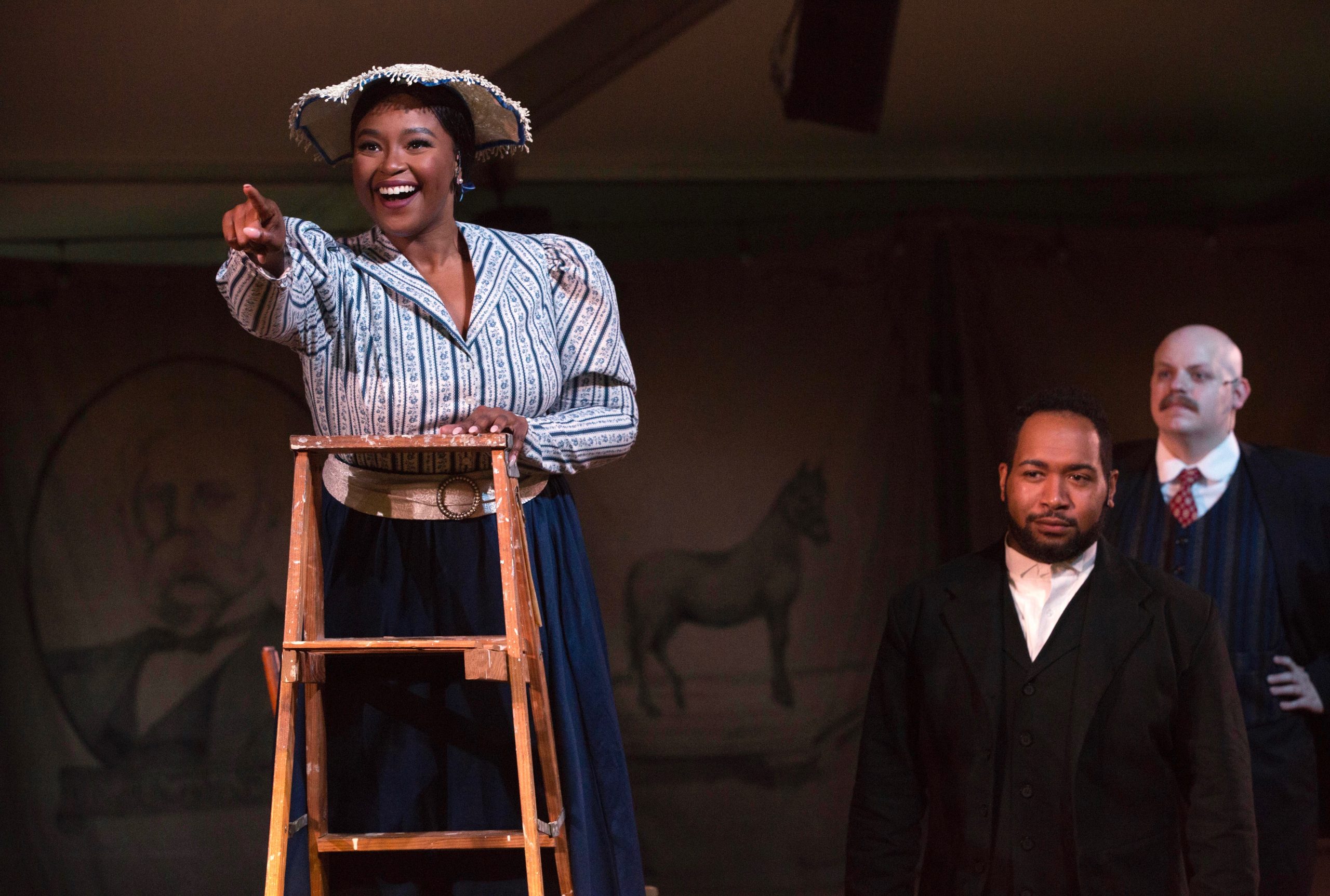 Marguerite Westinghouse (Melessie Clark) beholds the bright magic of a town lighted by AC. Husband George knew it would work and so, apparently, did his colleague Franklin Pope (Connor McCanlus).

How a Cornered Wizard Lashes Out

In the most basic sense, Edison vs. Westinghouse was a clash of dueling technologies, with AC proving superior. However The Current War depicts the chain of events as more of a culture clash. In this telling, Westinghouse’s more honest and generous business dealings win out over the nastier, more nefarious methods of Edison. Historical evidence seems to support this interpretation of the men.

Edison, genius that he was, reportedly had an ego to be reckoned with, as well as a big financial investment in the early DC systems he built. The drawback was that DC power couldn’t be transmitted over long distances. Had Edison’s vision prevailed, cities like Pittsburgh would’ve been pockmarked with coal-burning power plants in every corner of every neighborhood—good for the company selling electrical gear; not so good in other respects. AC permitted the setup we now have, with just a few big generation plants running cost-efficiently (if not always cleanly), and high-voltage lines delivering the power to points where it is “stepped down” for home or business use.

Long story short: When Edison saw that he was losing the current war, he freaked. He embarked on a dubious, often dastardly campaign to smear AC as fatally dangerous—which it is, at high voltage. The Current War draws straight from history in scenes that show Edison (played by Daniel Krell) surreptitiously plotting to kill dogs, a horse, and eventually a human with the un-stepped-down juice from Westinghouse AC generators.

This makes for a bizarre spectacle on stage. Westinghouse (played by Billy Mason) gets some chances to trash-talk and even trash-sing, as when he gloats that he’s found “a flaw!” in the Edison system. But mostly he is portrayed as magnanimous and caring, whereas Krell’s Edison becomes ever more the snarling, cornered villain as the cards keep falling against him despite his sneaky negative-PR stunts.

And now for the crucial question. Does all of this make for good musical theater? Short answer: not always, along the way, but ultimately, yes.

Artful Staging and an Existential Question

The Current War feels somewhat labored at times. There’s a lot of exposition to be crammed into about 100 minutes. Any work of theater adapted from true events faces this difficulty, because true events are complex and messy, often defying artistic license to simplify. Overall, given the source material, the musical does a nice job of storytelling. Some artful musical numbers help to avoid the “oh, and did you know this?” school of teaching history lessons on stage. (Which can come off as extremely awkward when put into song and dance.)

The performers carry the show superbly. The antic comical and dark-comical turns are done with gusto. And where The Current War pays off, ultimately, is in its handling of the human aspects of the morality play. The message is not simply “good guys win, bad guys lose.” Rather, it’s a deeper and perhaps truer evocation of the quandaries that each of us face in the complicated society that we occupy.

A good way into the show—at about the time when one may be tempted to start checking one’s watch, since The Current War runs straight through with no intermission—right around that time, William Kemmler appears. Kemmler was the first criminal to be executed in an electric chair. Edison took part in plans to have him fried by a Westinghouse generator. Mercifully, the musical does not replicate how tortuously the killing process went. 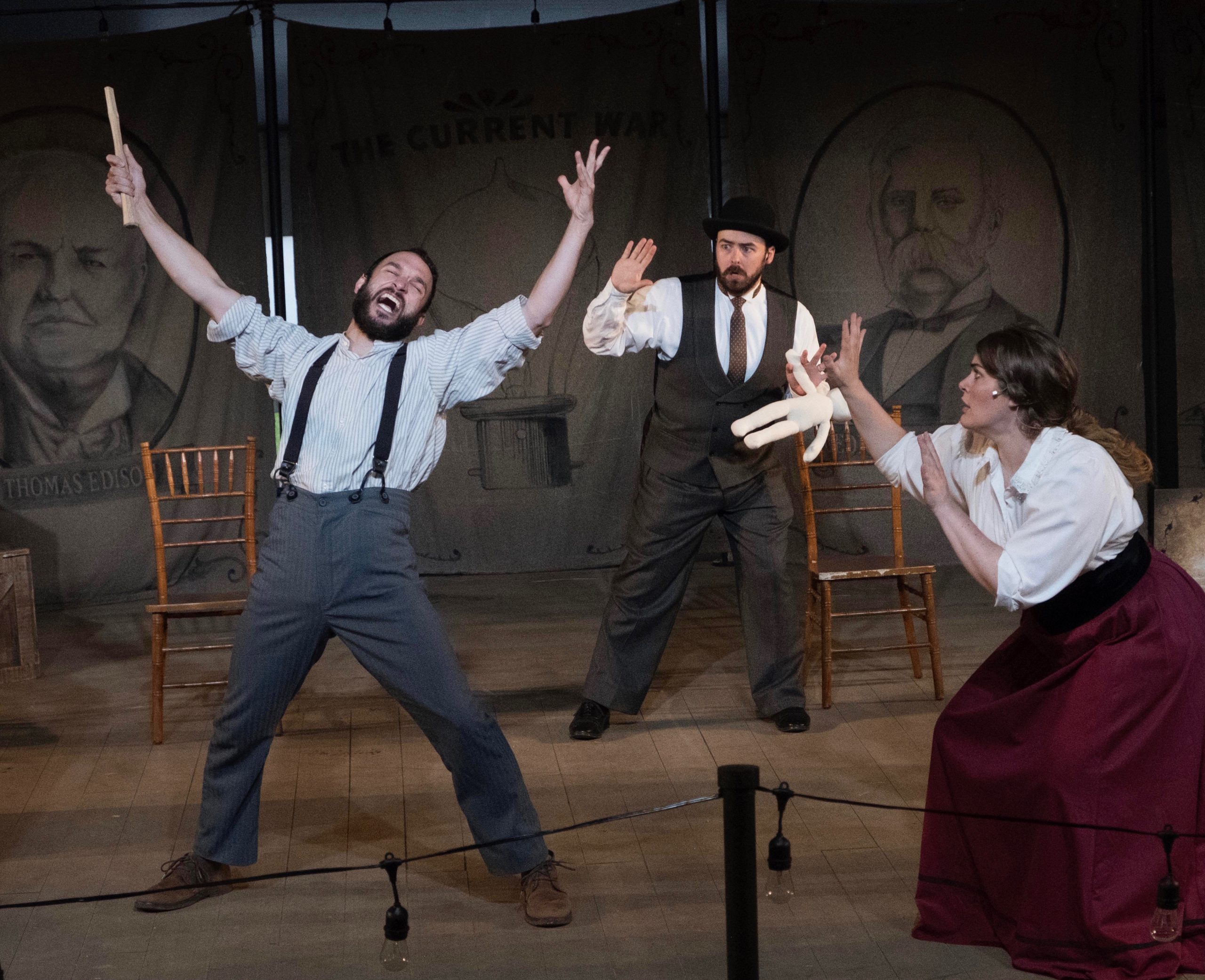 But wow, does it depict his crime with insane gusto: Kemmler, crazed by drinking too much, murdered his common-law wife. Actor Jerreme Rodriguez performs marvelously in what might be the show’s most interesting role. We watch him transforming from a wild-eyed murderer to a repentant, decent human being while his appeal winds through the courts. Amid the captains of industry and their sidekicks, he becomes Everyman. But fry he must, so fry he does.

Which leaves us not with a tidy “moral” to the story, but with questions. No one can doubt that electricity has benefited us immensely. Today we live in another age of inventor-entrepreneurs bringing new wonders to market, and surely there’s good in that, too. And yet the social order that we have built—or have allowed to be built, as willing accomplices—seems scarier and more unstable than ever. In more ways than I have room to enumerate here.

Will it fry us? Or are there happy endings to come?

Although the entire run of The Current War is sold out, you have two options. One is to watch it online. A video recording of the show is available June 12 – 27 and a $20 virtual ticket gives you on-demand viewing for 72 hours. Alternately, to get on a live-show waitlist: Go to Quantum’s webpage for the musical, click a performance you’d like to attend, and then click the waitlist link for that date.  Live performances continue through June 27 at Westinghouse Park, 7501 Thomas Blvd., Point Breeze.

Writer-composer Michael Mitnick is a Pittsburgh native. His musical took a long and winding road to fruition. After scripting and scoring the piece, he first adapted the script for a non-musical movie titled The Current War, featuring Benedict Cumberbatch as Edison. That movie was released to pretty-good reviews but little public notice in 2019. Quantum’s production is the first to present The Current War in its originally intended form as a stage musical.

All photos are from Heather Mull Photography.