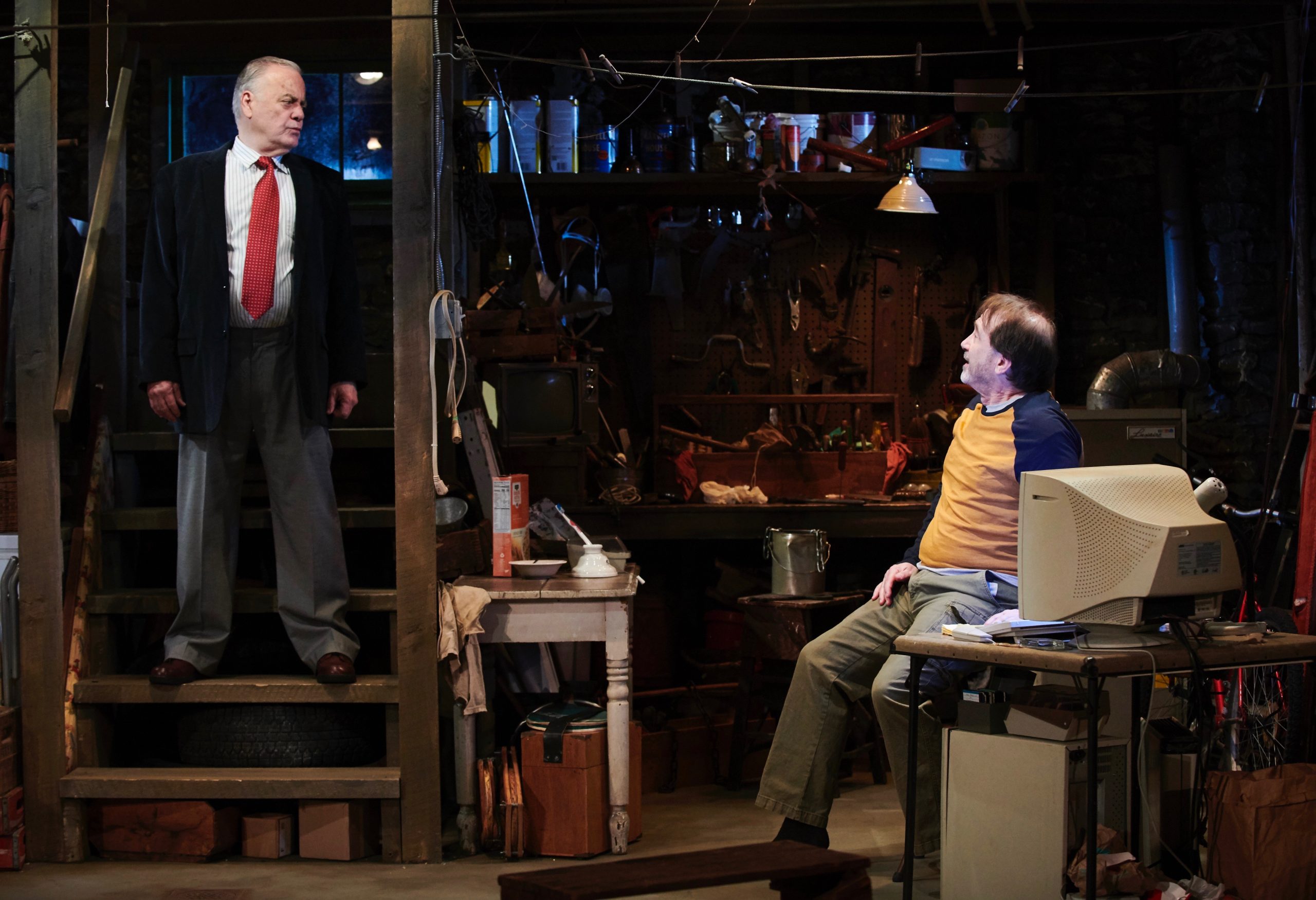 Home rule becomes an issue when Gerry, the man of the house, makes it clear he does not want his wife’s brother living in their basement. The actors in ‘Downstairs’ are John Shepard (L) and Martin Giles.

“Dysfunctional” is a nice euphemism. The “y” gives it a scholarly air: It’s not dissing anybody, just describing a failure to operate properly. And wouldn’t you rather be in a dysfunctional family or workplace than in a toxic one? Toxic means poisonous.

The new play Downstairs, at City Theatre, starts out looking like a comedy about a dysfunctional situation. An unemployed middle-aged man is crashing in his married sister’s basement; the sister wants him out because her husband does not approve. Such dilemmas are not unusual in this age of gig-economy displacement. One can imagine a play that’s a seriocomic riff on our fragmented social system, and at first, Downstairs seems to be headed in that direction.

But something truly wicked this way comes. Step by step, through a series of reveals that grow ever more creepy, we learn that both the basement-dwelling brother and his sister lead personal lives infected by toxic forces. Brother Teddy (played by Martin Giles) didn’t lose his office job due to layoffs. He’s a fascinating talker, the kind who rambles between brilliant insights and cosmic wackiness—and as his stories get wackier, it becomes evident that Teddy was let go because he is mentally disturbed.

Meanwhile, sister Irene (Helena Ruoti)—a stay-at-home wife despite having no children—comes across as entirely too worried about displeasing her husband. “My marriage is ridiculous,” she finally admits: “I married a horrible man.”

Horrible hubby Gerry (John Shepard) remains an ominous offstage presence until fairly late in the play. If you’ve ever had nightmares about authority figures, they are embodied when Gerry—a stern hulk of a man, dressed stiffly in coat and tie—descends the basement stairs to confront his unwanted tenant. From there, the play’s mixture of horror and humor descends into ugliness.

A Trigger Warning, a Prayer for Enemies

The City Theatre web page for Downstairs carries a blanket trigger warning. It simply says the play includes “content that some may find unsettling.” The exact nature of that content can’t be stated without giving away spoilers, so prospective patrons are invited to contact the theater in advance if they have concerns.

I would venture to be a bit more specific, as follows. Downstairs deals with both psychological and physical cruelty. If this excites you, no problem (and also no comment). But the play is far from being an exercise in torturing the audience.

The playwright, Theresa Rebeck, is an acclaimed writer for stage and screen. She knows how to do snappy dialogue, and more important, in Downstairs she creates characters you can care about. You’re almost guaranteed to wind up rooting for delusional Teddy and beleaguered Irene.

As for Gerry, who is set up as the villain of the piece, you’re driven to wonder what makes him tick. And when you find out, you may be reminded of the old joke about the man who asks a priest how it is possible to pray for one’s enemies. “I can’t help it; I hate them,” the man says, to which the priest says, “Just pray that all God’s children get what they deserve.”

So, do the characters in Downstairs each get what they deserve? Not saying. Can’t tip off the denouement, which is complex. What can be said is: Enjoy the journey. There’s plenty of good old-fashioned psychodrama to absorb, and plenty to think about afterward. 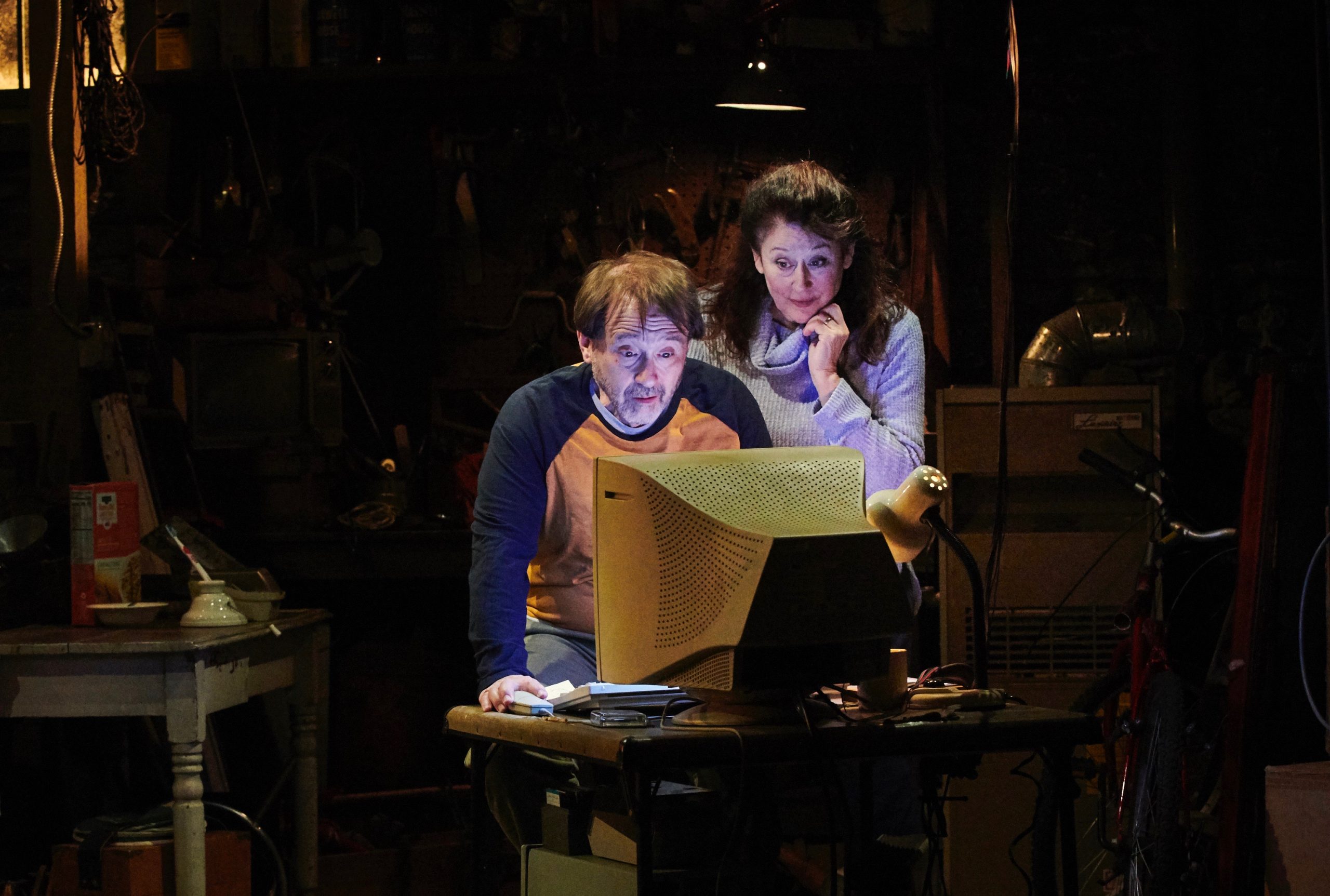 Do you see what I see? Teddy relates to the computer, while Irene (Helena Ruoti) hovers skeptically.

A Deep Dive on Teddy, a Conversation with a PC

For a three-hand play in which all three actors shine, it feels unfair to single out one for praise. But Martin Giles—well, he deserves it. Giles has been an audience favorite on the Pittsburgh scene for years. He excels at playing weird characters, not for the sake of weirdness, but for the sake of rendering the weird human condition faithfully. His turn as Teddy is marvelous in this regard.

The role requires him to be eccentric and confounding, yet lovable. Good playwrights don’t pluck their characters’ names out of the blue; they choose them to have meaning. Picture a teddy bear—maybe a somewhat deranged, talking teddy bear, of the kind that Samuel Beckett might snuggle up to—and that’s Teddy. Giles delivers the goods throughout Downstairs.

Early on, when sister Irene urges Teddy to think positively about his predicament, he writhes in agitation and points to the ancient PC he’s been using down in the basement: “I’m being very positive and accepting! I accept this computer. It’s wounded and limited, yes, but—” And when Irene puts in, “It’s not wounded. It’s broken,” Teddy comes right back with “It’s only a little broken”—sort of like Teddy himself. You can tell he identifies with the out-of-whack machine.

What’s more, this exchange turns out to be pivotal to the play’s progress. Irene insists that the PC doesn’t work at all. Teddy insists that it does. And for a long while—after Teddy has shown that he’s delusional, by telling a convoluted story about the mysterious persons who poisoned his brain and bloodstream at his former workplace, by stabbing him repeatedly with pencils—for a long while after that, when Teddy interacts with the basement PC, you are left wondering whether he’s really connected to the “interweb” or only thinks that he is.

Here, for example, is Teddy taking part in an online debate. While sitting alone at the computer and tapping furiously at the keyboard, he vocalizes his comments:

“I’m not going to participate in this discussion. Which is unrealistic … [pause, staring at the screen, and then]: … Okay, okay, you can make that case. I mean, everyone is just jumping on it, ten seconds too late any more. It’s like, the instant something becomes clear, everyone just runs after it … It’s like, someone points, ‘Over there! Over there!’ And then everyone runs to one side of the boat. And then the boat tips over, and then no one can do anything.”

Maybe the conversation is real. Maybe it isn’t. What must be conceded, in either case, is that Teddy accurately describes the quality of a lot of online chatter. And Giles, as Teddy, makes it utterly convincing.

The printed program for Downstairs contains an interview with playwright Rebeck. In it, she speaks of “Teddy’s unbound ability to say the truth. He’s a truth-sayer and that is what makes him so lost in the world.” This calls to mind Prince Myshkin, the title character of Dostoevsky’s novel The Idiot. The gentle prince is seen as an idiot in high-society circles because, among other things, he won’t lie.

To Dostoevsky’s credit, in none of his novels did he glamorize madness. While showing that people in a state of mental imbalance can sometimes perceive and speak profound truths, he made it clear that such people also suffer scorn and inner torment. To Rebeck’s credit, she makes the same points equally clear in Downstairs.

The result is that we are touched by Teddy, moved when he tries (as best he can) to help his sister out of her unhappy plight, and thoroughly engaged in the bonds that the two of them form while coping with terrible tyrant Gerry. All of which makes for a pretty darn interesting evening at the theater.

I would like to end my review with excerpts from a soliloquy that Teddy delivers near the end of the play. He’s talking about the spaces in which people live, and the emphasis we put on our homes. He says:

“In your heart, or other places in your body, where are you? What is it that makes you a person? … It’s not that you need a house … But this other space, inside the house? … Space is the same everywhere. It’s just this other thing.”

Theresa Rebeck’s Downstairs is directed at City Theatre by Marc Masterson, the company’s artistic director. Scenic design is by Tony Ferrieri, costumes by Angela Vesco, lighting by Brian Lilienthal, and sound by Steve Shapiro. The stage manager is Taylor Meszaros.