A little-noted strong point of ‘Hamilton’ is the show’s dynamic physicality. In the production visiting Pittsburgh as part of the February theater lineup, Joseph Morales plays The Man. (Photo © Joan Marcus)

The show must go on. Maybe not all the shows, all the time, but while Pittsburgh theater fans rue the loss of productions canceled or postponed due to Omicron, the February schedule still includes shows that promise a peak experience. There’s even sufficient variety to let you choose the peaks you prefer.

A heady, yet visceral mixed-media riff on the effects of mass media? Try The Medium at City Theatre, inspired by the work of Marshall McLuhan. In a Grove, at Pittsburgh Opera, is a new take on a classic (and very strange) Japanese samurai tale. If these sound too exotic, a reliable romcom visits with the touring production of Pretty Woman: The Musical.

American Moor, about a Black actor auditioning to play Othello, offers a striking perspective on race issues. Modern dance is on tap in Curiosity: The Play Book by Attack Theatre, the company that never dances defensively. A one-woman show at off the WALL, The Ins and Outs of Fingers, Spoons, and an Open Marriage, might tell you all you need to know about these subjects. And late in the month, we have the return of a musical whose appeal is so wide and deep that it has practically become a requirement for cultural literacy, Hamilton.

Shows are previewed below in order of run dates. Embedded links will take you to ticket info plus updates on Covid precautions. 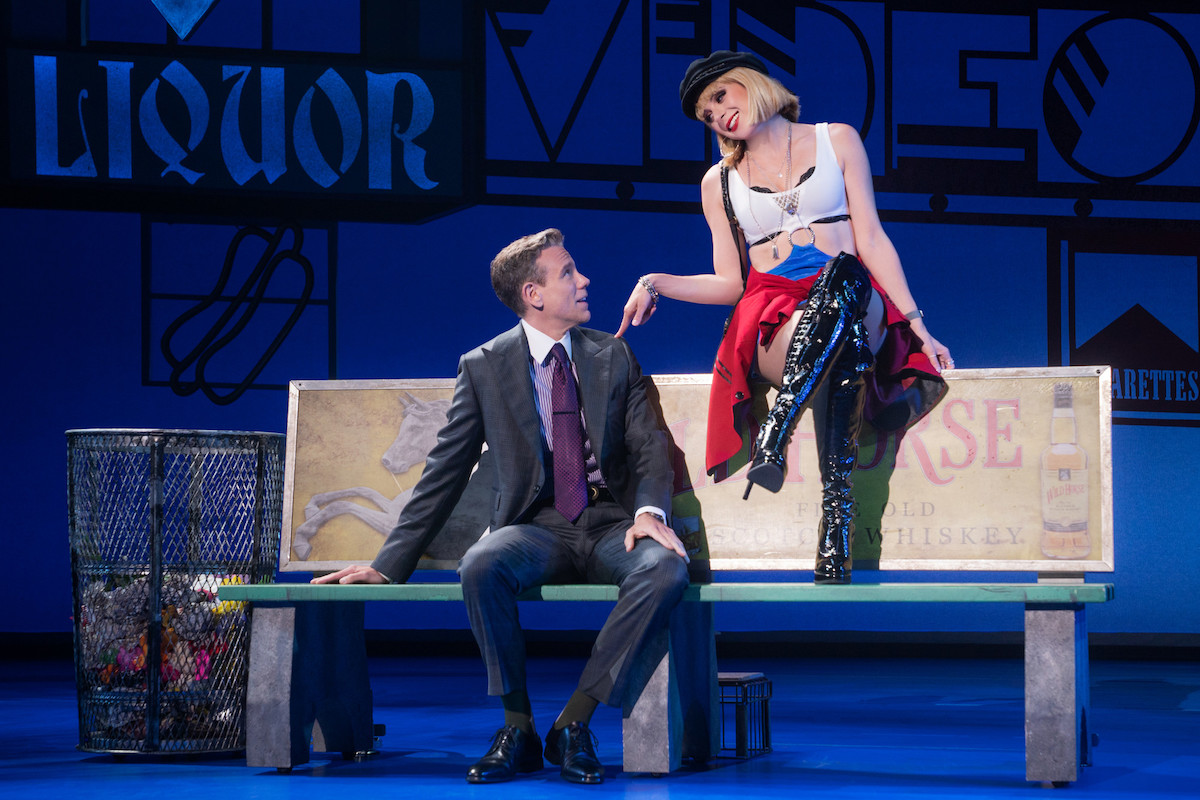 It’s the romantic comedy that has had reviewers and feminist scholars alike debating its meanings and merit. Pretty Woman began as a 1990 movie, a star vehicle for Julia Roberts and Richard Gere. Now there’s a stage musical. The touring production of Pretty Woman: The Musical visits Pittsburgh, and what was true of the movie seems equally true of this show—audiences love it. The musical is said to follow the movie’s story line closely. A corporate raider from Wall Street, visiting L.A. to do a takeover, encounters a pretty woman on Hollywood Boulevard. Her profession is sex worker; he hires her to pose as his trophy girlfriend while he negotiates the business deal. Who could have guessed they’d fall into that thing called love? Maybe you did, but if you want tickets, reserve promptly. Good seats are going faster than shares of a hot IPO. Pretty Woman: The Musical plays at Benedum Center, 237 7th St., Cultural District. 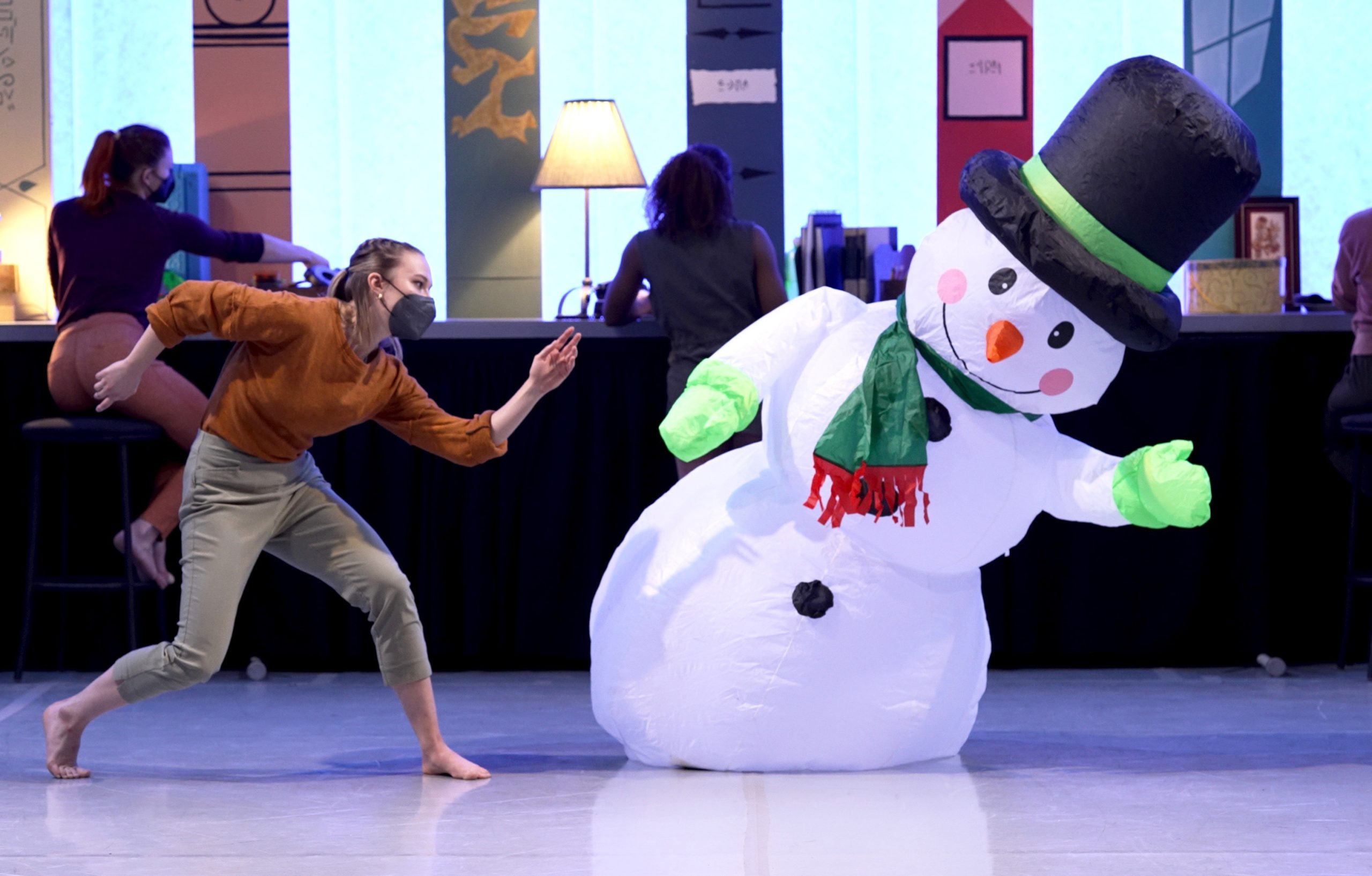 Once again, looks like a lot to like from Attack Theatre. This pic is a rehearsal for ‘Curiosity: The Play Book.’ (Photo courtesy of the company)

Attack Theatre, Pittsburgh’s renowned modern-dance-and-theater company, performs original works that range from deeply dramatic to tons of fun. The common thread is that they’re often hard to describe in a couple of sentences, and so it goes with Curiosity: The Play Book. Let’s start with the obvious and say the theme is curiosity. Then we can borrow a line from the company’s promo material, which promises that the piece “will ignite feelings of joy and wonderment to momentarily let habits, responsibilities, grocery shopping, middle school assignments, old friend drama, dirty laundry, and bad coffee melt away.” Inside info further indicates that an inflatable snowman is part of the action. Curiosity was devised by the Attack dancers, with choreography by artistic directors Peter Kope and Michele de la Reza. Furthermore, don’t let the snowman thing mislead you into thinking the show will have you shivering through an outdoor production. Curiosity: The Play Book is staged indoors at Attack Theatre’s new studio facility, and livestream tickets are available as well. 212 45th St., Lawrenceville.

THE MEDIUM by Anne Bogart and SITI Company. Presented by City Theatre. Now through Feb. 13. 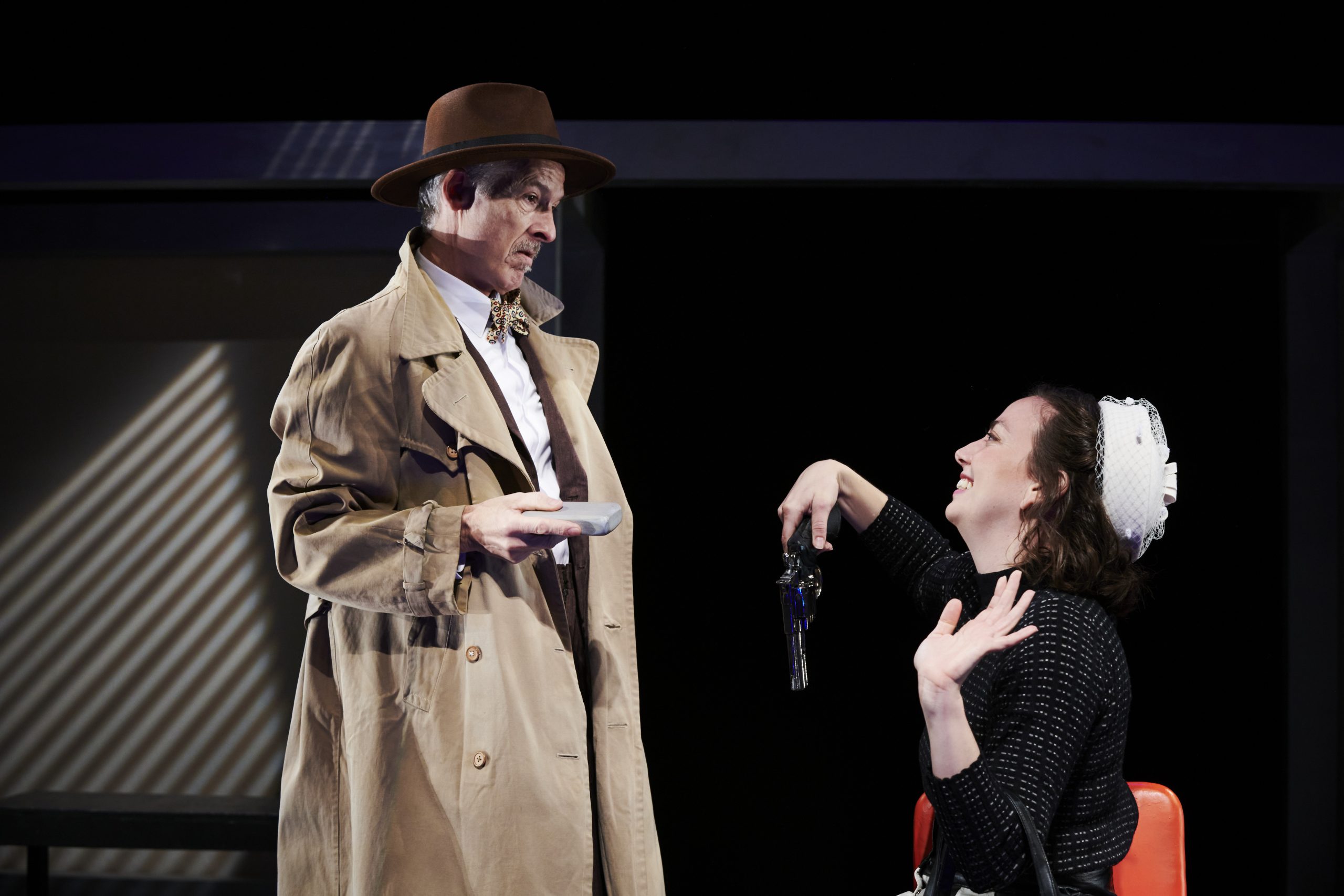 Could modern media have had its roots in an age when men wore bowties and women carried pistols? Actors Will Bond and Violeta Picayo explore the implications in ‘The Medium.’ (Photo: Kristi Jan Hoover)

Marshall McLuhan did not write a book called The Medium Is the Message. Look closely at the cover and you will see that it’s titled The Medium Is the Massage. Very tricky. Which is the point. SITI Company, the performing arm of the Saratoga International Theater Institute, visits Pittsburgh to present The Medium. Conceived by SITI cofounder Anne Bogart and grounded in McLuhan’s work, it explores the effects of modern media on all of us. You may indeed find the piece to be massage-like, as SITI’s distinctive style integrates dance and movement with acting. 1300 Bingham St., South Side.

Until recent times, most Black actors were limited to playing roles explicitly scripted as Black. This narrowed their prospects tremendously, and even then, sometimes they were bumped out of the good parts: For a 1965 film of Othello, Laurence Olivier acted the title role in blackface. Although diversity in casting has begun to open up the field, racial issues are far from going away, in theater as in life. Pittsburghers can now see a play that takes a uniquely creative look at the subject. Keith Hamilton Cobb’s American Moor is a work of meta-theater in which Cobb, a Black writer and actor, essentially plays himself. The setup is fictional. He’s auditioning for Othello. A white director, seated offstage, tries giving him instructions to get into the character of the Moorish general. This is mind-boggling to Cobb, since layers of irony are intersecting here. Shakespeare’s Othello was a man treated unjustly, and wouldn’t a Black American be likely to know a thing or two about that? The play mixes soliloquies from Othello with Cobb’s own soliloquies, which are fiery and not so fictional. American Moor premiered off-Broadway in 2019. Cobb brings it to the PNC Theatre at Pittsburgh Playhouse, 350 Forbes Ave., Downtown.

IN A GROVE (opera) by Christopher Cerrone and Stephanie Fleischmann, from the short story by Ryūnosuke Akutagawa. Pittsburgh Opera, Feb. 19 – March 3.

Pittsburgh Opera presents the world premiere of an opera with a most intriguing background. In a Grove is adapted from the same Japanese short story that was the basis of the great samurai/crime film Rashomon. A dead samurai has been discovered in the woods, bound and stabbed. At the inquest, several persons of interest are queried, including the samurai’s widow, a man suspected of being the killer, and the victim himself—testifying from the beyond, through a medium. None of their stories match. The opera resets In a Grove in the mountains of Oregon in the 1920s, shifting the dead man’s identity from samurai to schoolteacher. The composer is Christopher Cerrone and this is his second opera dramatizing a famous work of fiction. Invisible Cities, adapted from the surreal novel by Italo Calvino, was a finalist for the 2014 Pulitzer Prize for Music. Cerrone composed In a Grove to a libretto by Stephanie Fleischmann, who worked from the original tale by author Ryūnosuke Akutagawa. In a Grove is a chamber opera. Pittsburgh Opera’s premiere has four singers in multiple roles: baritone Yazid Gray, tenor Andrew Turner, soprano Madeline Ehlinger, and countertenor Chuanyuan Liu. At the company’s Bitz Opera Factory, 2425 Liberty Ave., Strip District.

Hamilton stands alone. No other American musical has so quickly or so thoroughly captivated the public, at every level—from highbrow critics and Pulitzer Prize voters, to the legions of kids listening to the OCR on their phones and wearing “Young Scrappy & Hungry” t-shirts. Hamilton opened on Broadway in 2015 and is still running there. The last touring production to visit Pittsburgh came in January of 2019, shortly before the you-know-what. Now Hamilton returns, with the new tour booked into Benedum Center and booked solidly. For tickets, consult your favorite aftermarket source. There are probably several explanations for the musical’s popularity. Alexander Hamilton’s life was filled with both personal and political drama. Writer/composer Lin-Manuel Miranda struck an unusual but resonant chord by telling the story hip-hop style, using actors of Black and nonwhite heritage to portray the white side of America’s heritage. Also, Hamilton is good. See our review of the 2019 production for details. Hamilton is presented as part of the PNC Broadway in Pittsburgh series at  237 7th St., Cultural District.

THE INS AND OUTS OF FINGERS, SPOONS, AND AN OPEN MARRIAGE (one-woman show) by Pascale Roger-McKeever. The artist at Carnegie Stage, Feb. 24 -27. 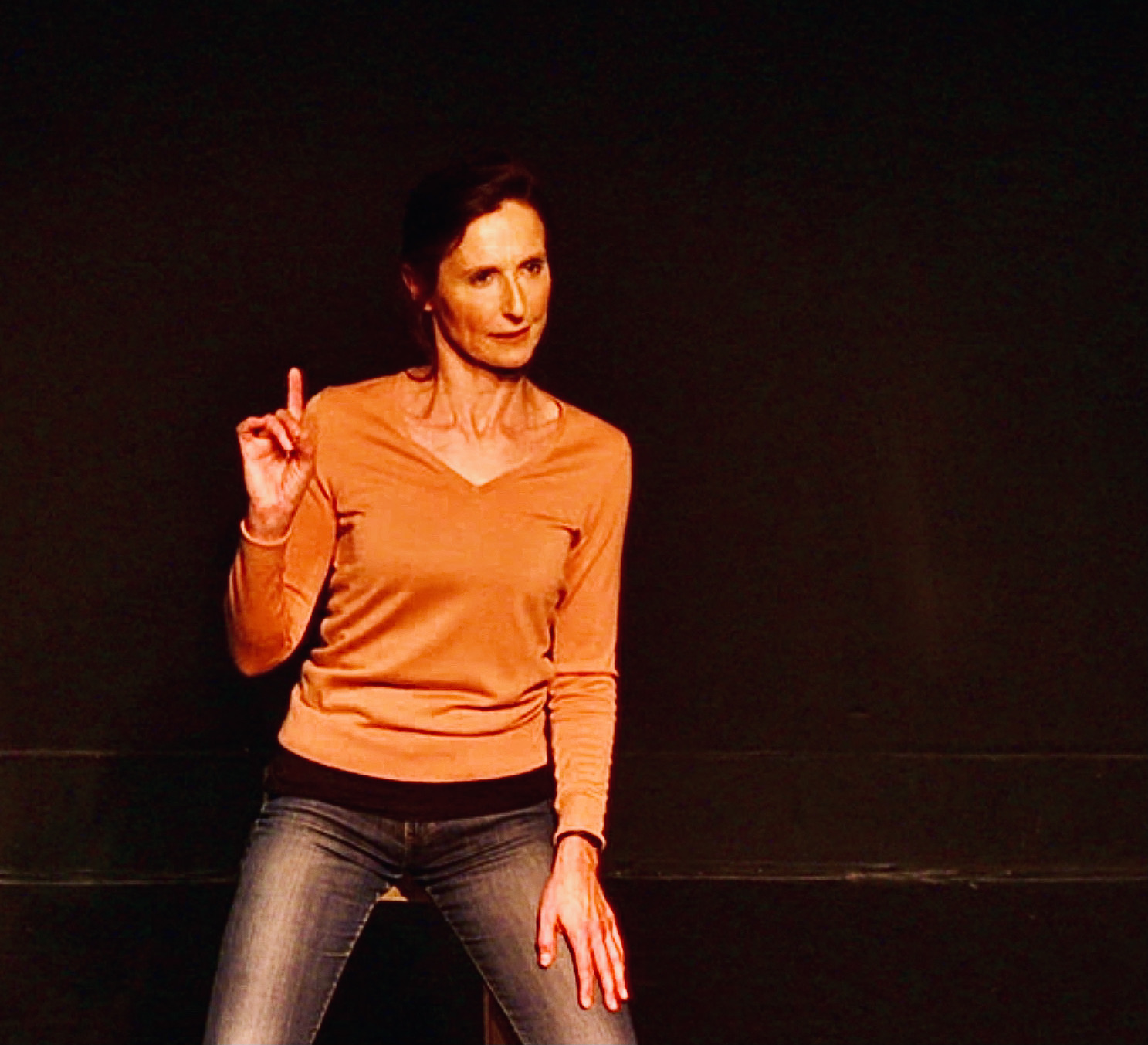 Caught here in a teaching moment, Pascale Roger-McKeever elucidates ‘The Ins and Outs of Fingers, Spoons, and an Open Marriage.’ (Photo courtesy of off the WALL Productions)

Off the WALL Productions, one of the Pittsburgh area’s most adventurous theater companies, has been sorely missed during the long pandemic break. The company rumbles back into action this year by starting with a series of solo shows. First up is a visiting production, written and performed by the French-Canadian whirlwind Pascale Roger-McKeever. Her show—The Ins and Outs of Fingers, Spoons, and an Open Marriage—is titled enigmatically but also precisely. That’s really what it is about. The last aspect has to do with a woman whose husband declares that their marriage should be open. She comes to embrace the proposition with a vigor that perhaps was unexpected. One does expect that patrons of the show ought to leave the children at home. See Roger-McKeever in The Ins and Outs at off the Wall’s Carnegie Stage venue, 25 W. Main St., Carnegie.