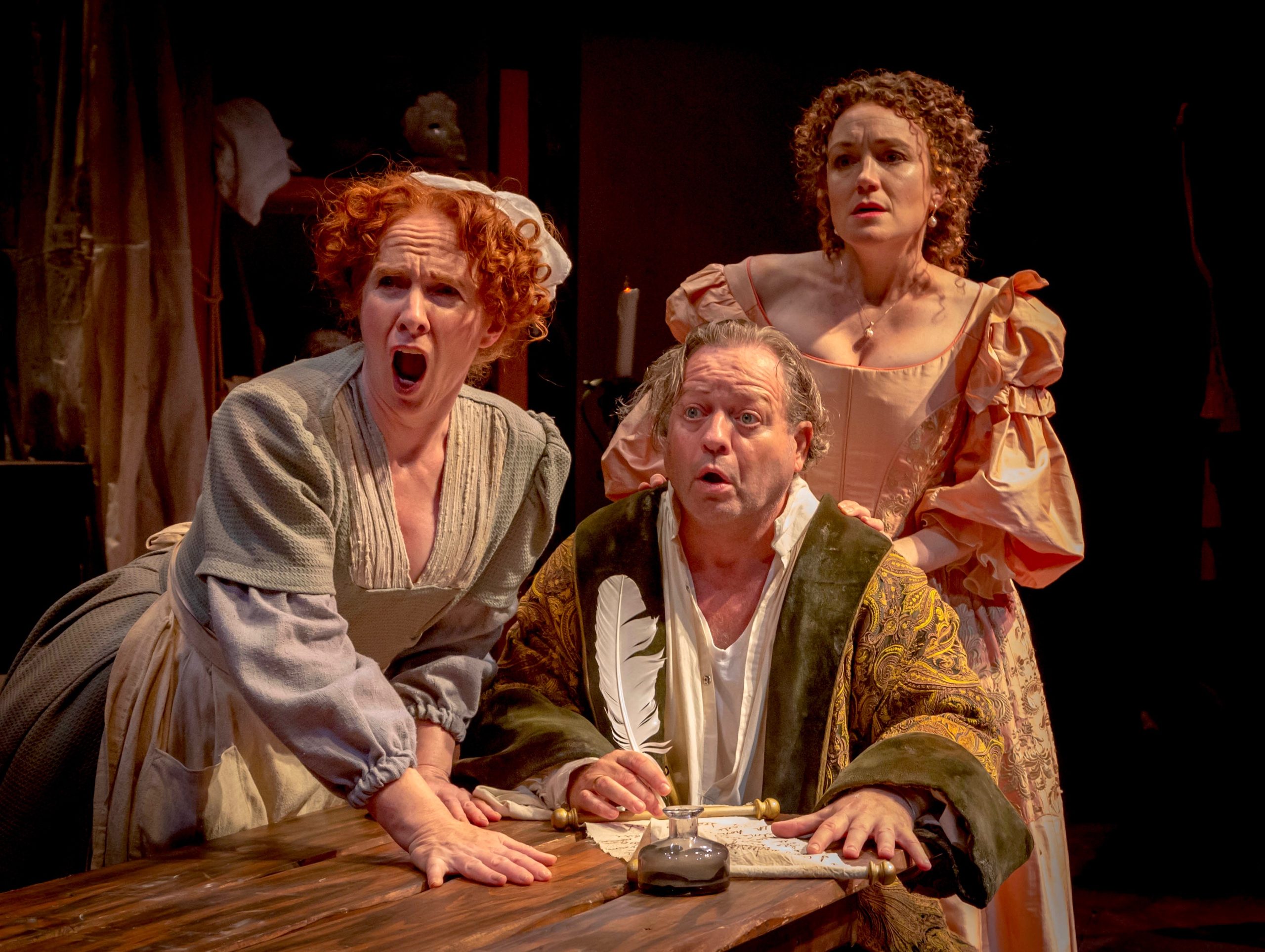 Is there method to the madness or is it a case of too many edibles? The play in question is The Illustrious Invalid at Kinetic Theatre (through June 26). Recent months have given us some weird ones in Pittsburgh theaters, and now Kinetic goes over the top with a wild comedy featuring, among other attractions, bottom humor. You may think you wouldn’t want to see an enema performed on stage but you’re wrong. This reviewer, despite preferring a more subtle brand of chuckles, experienced roars of laughter that can only be described as cathartic. And relax, the deed gets done without actually showing a bare bum, so there.

Attending The Illustrious Invalid will entitle you to tell your grandchildren you saw it first. The Kinetic production is the world premiere. The playwright is Simon Bradbury, a widely traveled British theater artist who also plays the title role. It seems Mr. Bradbury was moved to create a comedy about Molière, the late French theater artist known for his great talent and for the manner of his death. Here’s a bit of context about each.

Jean-Baptiste Poquelin, writing and acting under the stage name Molière, directed his own theater company in France during the 1600s. It was a tricky time to be in theater. People loved the product but the profession was scorned as naughty and wicked, especially by the Catholic Church. Molière navigated this minefield like a wizard. To mix metaphors, he walked the line while pushing the envelope, turning out satirical comedies that drew the ire of the Church but won the patronage of the Sun King, Louis XIV.

What caught him in the end was tuberculosis. His last play—ironically—was The Imaginary Invalid, a romp with a hypochondriac at the center. Acting the title character at the age of 51, Molière collapsed on stage, coughing up blood. He finished the show, then died shortly after. Without last rites, which no proper priest would administer to a theater rat. He might be watching from Hell while his plays live on to this day.

And what would he think of Simon Bradbury’s send-up of his tragic demise? Let’s speculate.

Oh, But the Play’s the Thing

Many details in The Illustrious Invalid are historically accurate. Since everything is connected to everything else, it wasn’t unusual in the 1600s to have purgative enemas prescribed for maladies including headaches. But the authenticity of the butt stuff isn’t the point. The overall tone of the comedy at Kinetic seems to resonate with the tone of much of Molière’s own work. You could call it Blackadder meets The Three Stooges. From Molière’s viewpoint, it’s sharp-elbowed repartee infused with the loony slapstick of commedia dell’arte. Indeed, during the play you will see at least one actor donning a grotesque commedia mask.

You’ll also see lots of buffoonery, arch posturing, and physical hijinks, done with skill and panache by a stellar cast. The setting is backstage on the eve of Molière’s last performance. The great man insists the show must go on, with him in it, though he’s been wobbling around and spitting blood into his hanky. His theater-company minions—played by Derdriu Ring, David Whalen, and Matt DeCaro—try to wrangle him out of the idea. Molière’s clever wife (Joanna Strapp) has a plan B afoot, which is to let the lead role be taken by a young understudy (Michael Patrick Trimm), with whom incidentally she’s been understudying in her spare time.

Unwanted guests barge in, threatening to stop the show entirely. One is a manly musketeer, disgusted by the effete counterculture of the theater world (Whalen again, wearing an absurd mustache). The other is a maniacal priest, brandishing a crucifix and an aspergillum—a handheld holy water sprinkler—as he reels through space-time rooting out demons and, at one point, exorcising the audience: “Out, foul spirits! Back into the night from whence you came!”

The priest is played by my personal favorite among the cast, Tony Bingham. Along with having top comical chops, he’s constructed in a way that makes the silliness look sillier by contrast. Bingham is old-school handsome: tall, dark, and chiseled.  Born earlier, he could have played the straight-shooting lawman in a 1950s Western. So it becomes all the more hilarious to watch him shoot crooked, the epitome of an authority figure gone bananas. 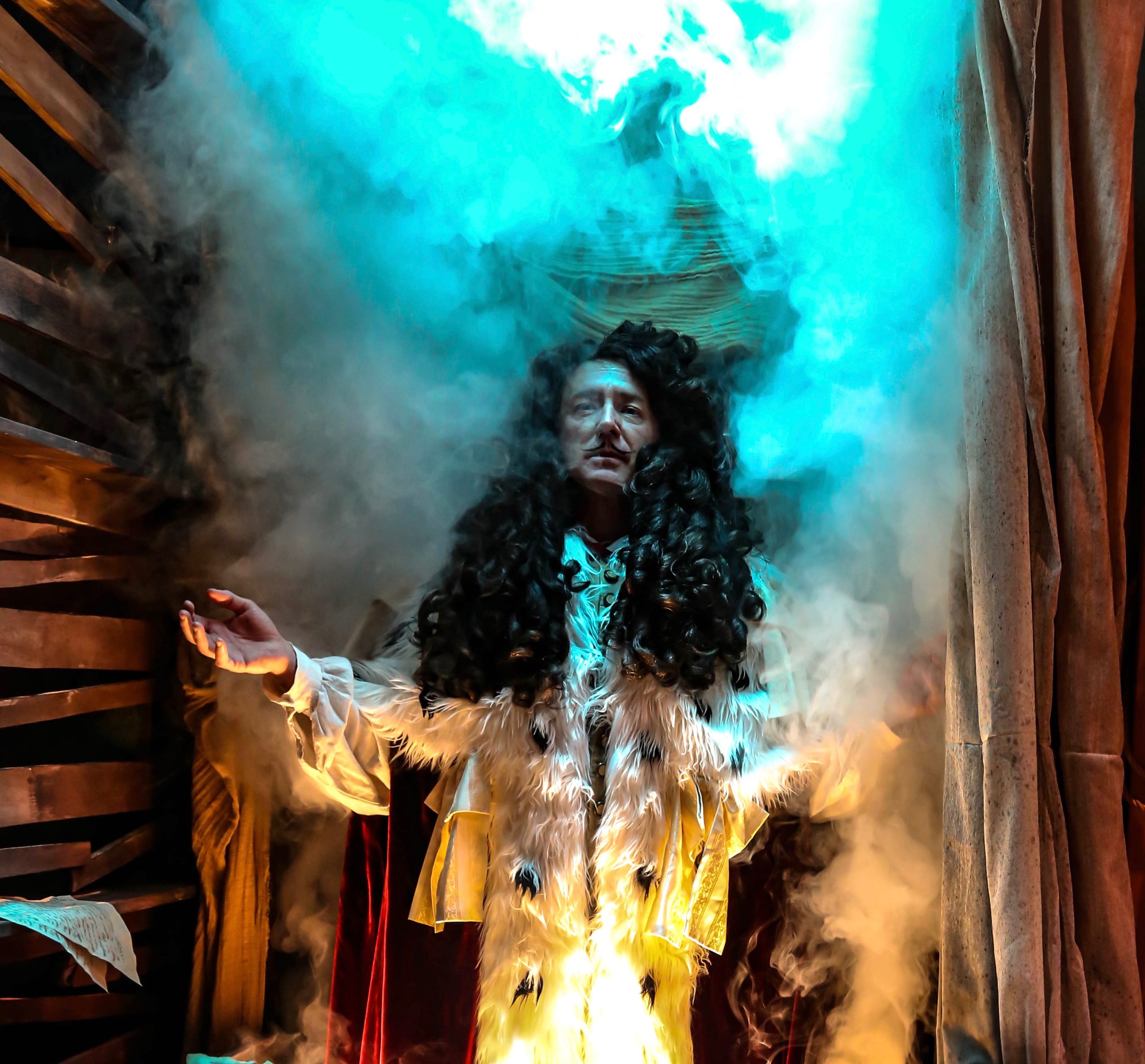 Wait for it. Amid mayhem, his solar majesty Louis XIV materializes. Under the big wig is actor David Whalen.

Reading the descriptions here, some theater fans will wonder if they can expect to find meaning beneath the muck. Does the play have substance or is it Stooges all the way down? I would say it conveys a shimmering, elusive sort of meaningness. The exorcism of the audience is meta-theater; the whole thing is a play about a play. It’s people pretending to be people who believe it’s important to pretend. Or who are outraged by the pretense, or who fear the grim reality that awaits us behind the pretense.

Which tempts me to use a term I usually hate: relevance. Relevance to the present social situation does not equal high quality. Nor is it necessary in order for something to be worthwhile. Yet I would ask you this, after you’ve seen The Illustrious Invalid. Doesn’t all the business about people playing other people feel weirdly relevant to the hall of mirrors we currently live in? Surrounded by screens and actors presenting fictions for us to consume, some of them meant for entertainment and some for deception?

Also, the death scene is good.

Simon Bradbury’s The Illustrious Invalid is directed for Kinetic Theatre by Andrew Paul, the company’s producing director. So long as Bradbury remains alive—break a leg, Simon!—the play runs through June 26 in City Theatre’s mainstage venue at 1300 Bingham St., South Side. Visit Kinetic on the web for tickets and further information, or call the Box Office at (412) 431-2489.

The scenic designer is Johnmichael Bohach, with lighting by Gary Bower and sound by Mark Whitehead. Grace Kang is the costume designer, with props by Katherine Mikula Wineman. Michael Petyak is fight director, and last but never least, the stage manager is Carrie Yacono, assisted by Gabriella Walko.