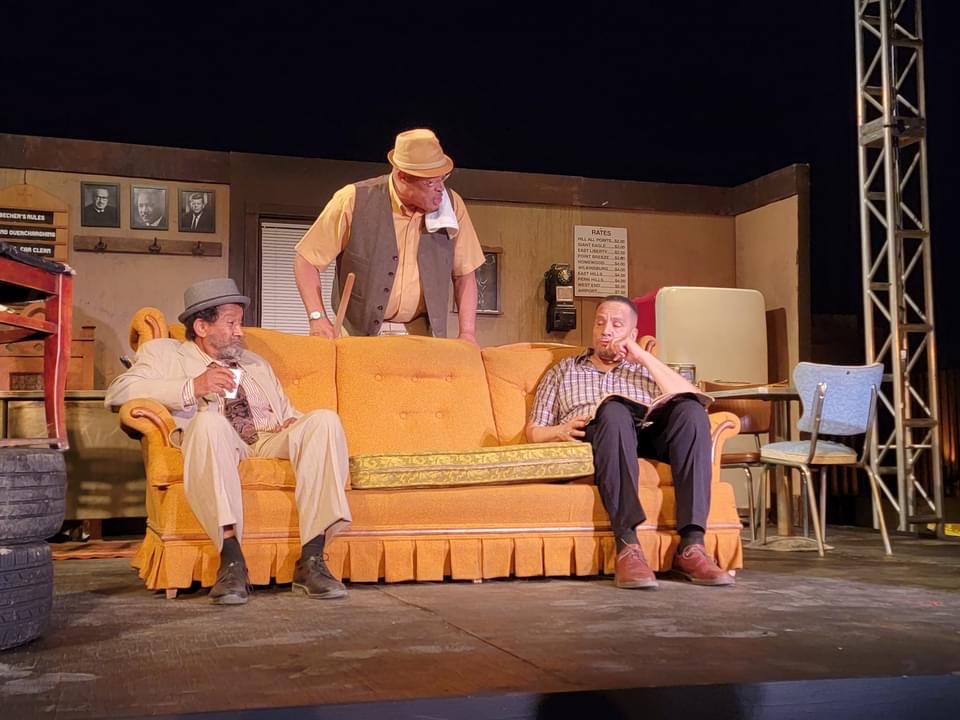 The opening weekend at the newly restored August Wilson house kicked off in a big way Friday evening with the opening of Pittsburgh Playwrights Theatre Company’s production of Wilson’s play, Jitney. With Jitney being Wilson’s first play, he did what a lot of great writers do—he wrote about what he knew. Wilson had an innate talent for writing authentic dialogue, because he was a great listener. When he went to restaurants and coffee shops he would listen to the people around him and take notes. Constanza Romero Wilson, Wilson’s wife, said this weekend that Wilson noted the rhythm, cadence, and musicality of the dialogue he heard in Pittsburgh.

Wilson wrote Jitney in 1979 and it was put into production at the Allegheny Repertory Theatre here in Pittsburgh in 1982. He would then go on to write several more plays in his famous Pittsburgh Cycle, all of which were performed in New York and other cities across the country. Wilson returned to Pittsburgh in 1996 to rewrite Jitney for a run at Pittsburgh Public Theatre.

Like Wilson’s other plays, Jitney features rich, fully-formed characters. This is a one set play with all the action taking place in a storefront jitney station in the Hill District in 1977. The station is owned by Becker (Sala Udin) who has a certain way that he likes things done. There’s even a list of Becker’s rules on the wall of the station hanging between the Mellon Bank calendar and framed photos of Thurgood Marshall, Martin Luther King Jr., and President John Kennedy. People would call the station’s phone for a ride, many times for rides to and from Giant Eagle for shopping. The drivers answer the phone by saying, “Car service.”

Becker is a strong and proud man who’s endured much. He lives by the rules and is respected in his community. Becker is a semi-retired millworker from J&L Steel. His wife passed away traumatically and his son Booster (Jonathan Berry) is in jail at Western Penitentiary. Udin was a friend of Wilson and was  the original Becker when Jitney was first staged in 1982. Youngblood (Richard McBride) is a Vietnam vet who’s hot-headed, and working hard to care for his girlfriend Rena (Elexa Hanner) and their baby.

Youngblood is usually butting heads at the jitney station with Turnbo (Les Howard). Turnbo is like a middle aged man who is still in his teenage years. He’s always getting into other people’s business, lounging around, sulking, and looking at Playboy magazine. Subjects for arguments between the two are among others, paying for coffee and Youngblood being seen riding around with Peaches, Rena’s sister. Things come to a very dramatic head between them. McBride and Howard give the scene true believability. Howard is reprising the role of Turnbo for Pittsburgh Playwrights. 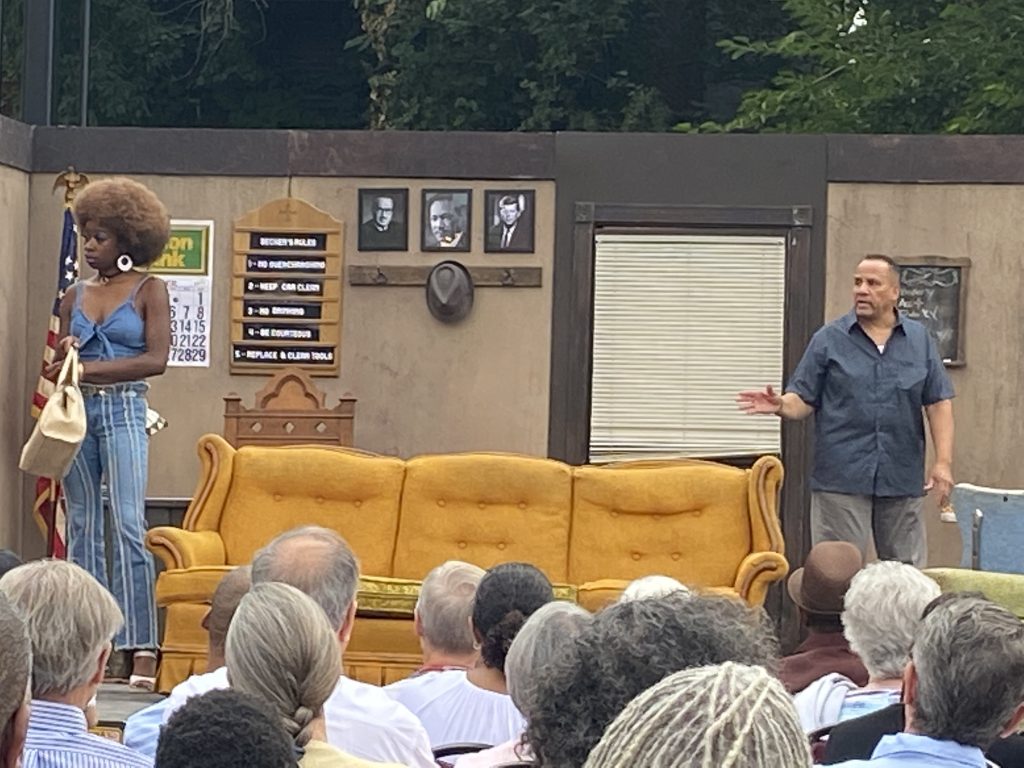 Turnbo is trying to convince Rena (Elexa Hanner) that she’d be better off with him and not Youngblood.

Doub (Chuck Timbers), like Becker, is a voice of reason at the station. Timbers has appeared in the plays Fences and Ma Rainey’s Black Bottom. Also supplying some occasional wisdom, and many laughs, is Fielding (Mike Traylor). He’s a jitney driver who takes a “nip” or two of adult refreshment in between trips, as long as Becker’s not around. Fielding thinks his wife, whom he separated from, and hasn’t seen for 20 years, still loves him. One nugget of wisdom from him is when he says, “You don’t always have the life you dream about.” Fielding plays the drunk humor role splendidly.

One scene that turns from sour to sweet is when Rena stops by the station, with her afro hairdo and late 70’s outfit, to confront Youngblood about taking their grocery money and driving around with her sister. It’s a dynamic, well-acted scene done with heat and compassion by both McBride and Hanner.

Booster is released from prison early  and stops by to see his dad and to work out their troubled history. Becker and Booster engage in several rounds of stinging recriminations with many cutting blows delivered.

Becker tells Booster that he and Booster’s mom sacrificed to give him the best shot possible for a successful life and that he threw it all away by committing a senseless crime. Booster says that his father could have supported his mother more and never even came to his trial with her. Becker replied that Booster committing that crime put a mark on him, and now Booster is just another “n-word” in the street to him.

Booster leaves and returns to the station in the next few days and tries to rectify their continuing rift. They both awkwardly misstep and Becker leaves. Booster returns again soon, but his dad is not there. Watching Udin and Berry spar is like watching an exciting fight between two equally ranked heavyweights. Udin is the older, master actor and Berry is a highly skilled younger talent. Berry has appeared in seven of Wilson’s Pittsburgh Cycle plays including Pittsburgh Playwright’s 2010 production of Jitney as Booster. 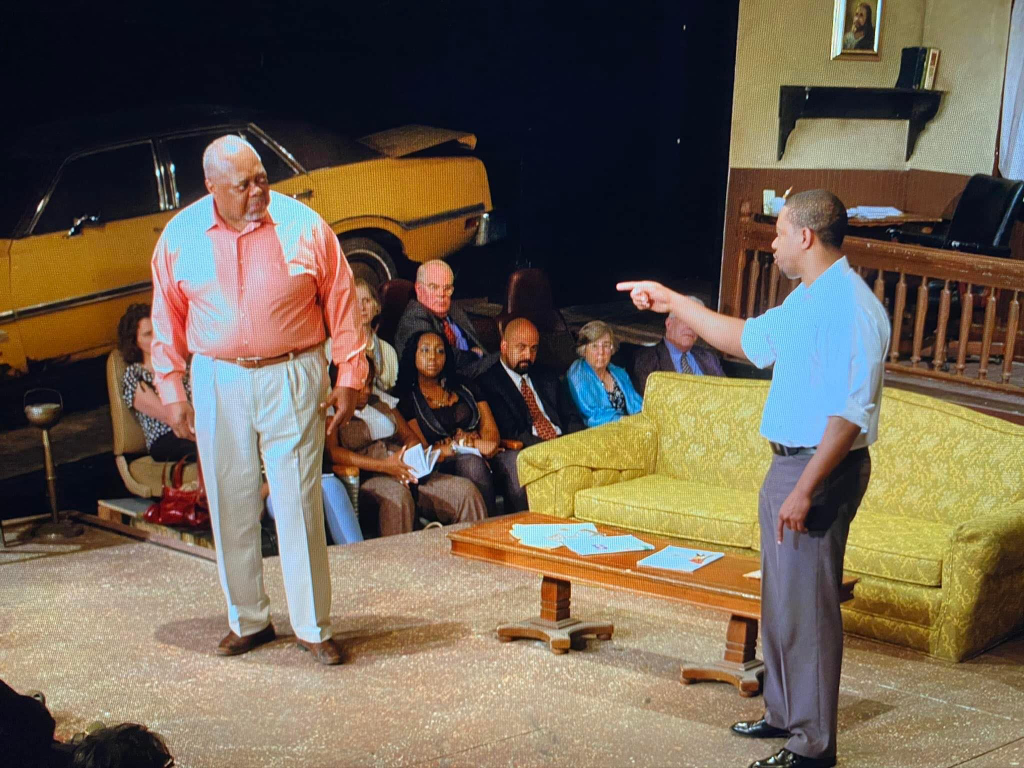 Becker (Sala Udin. L.) and his son Booster (Jonathan Berry. R.) going toe-to-toe over the past, present, and future in the 2010 Pittsburgh Playwrights production of ‘Jitney.’ (Photo: Mark Clayton Southers)

One topic that runs through several of Wilson’s plays, including Jitney, was the ongoing urban renewal and its blocks of buildings boarded up and slated for demolition in the Hill District. This is also a subplot in Jitney. There are many humorous topics up for discussion too at the station like who is more beautiful, Lena Horne or Sarah Vaughn?

Other colorful characters are Shealy (Roosevelt Watts), a slick, high-style bookie who uses the jitney station’s phone to take bets. Rounding out the cast is Philmore (Boykin Anthony), a doorman at the William Penn Hotel who stops by the station periodically. The whole cast is amazingly talented. 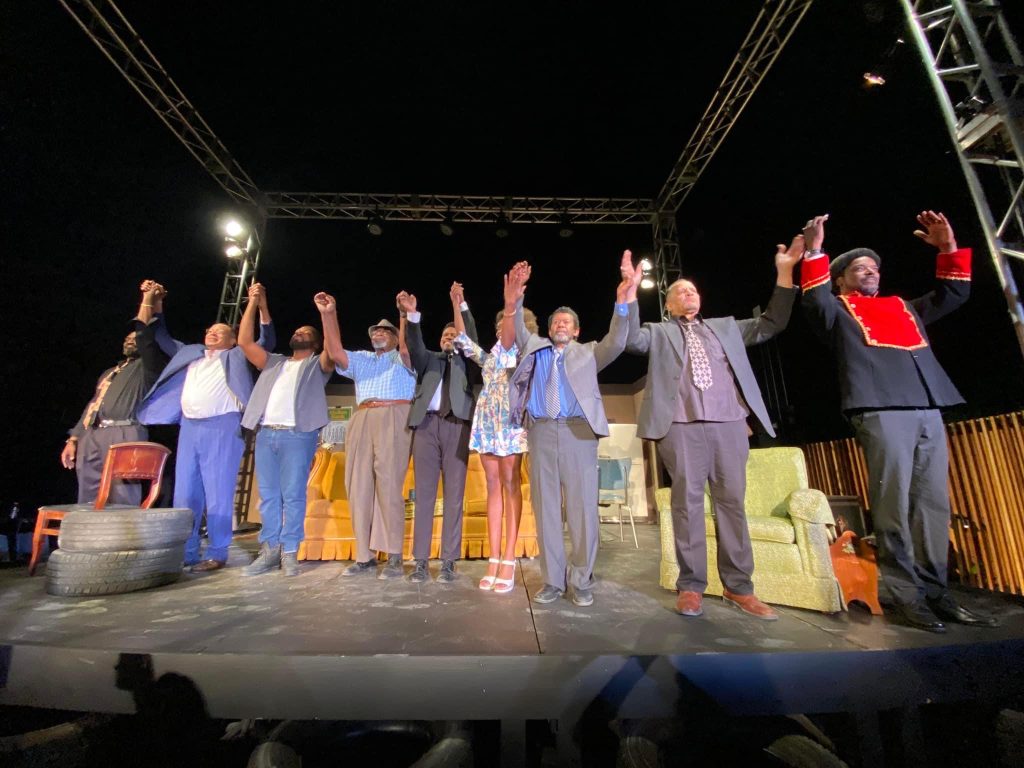 ‘Jitney’s’ full cast receiving applause from the audience at the end of the play.

One of the take-aways from Jitney is to make amends with your loved ones while you have the opportunity. One never knows when the good Lord (or great spirit) will call us home. Jitney is a top-notch, well acted play full of humor, drama, and humanity.

Everything ran very smoothly in Jitney under the direction of Mark Clayton Southers, founder and producing artistic director of the Pittsburgh Playwrights Theatre Company. Southers was mentored by August Wilson. He lives in the Hill District and attended the nearby Schenley High School, now closed. In his pre-show talk he mentioned that he and his wife, Neicy, had bought the former Madison Elementary School in the Hill District and are converting it into arts and entertainment, and educational use. It was also Pittsburgh Playwright’s board member Tawnya Redwood’s  birthday and Souther’s wife coordinated the serving of birthday cake and wine to celebrate it during intermission.

During that time I saw a man that looked very familiar to me. I walked up to him and said hello. He was very friendly and I told him he looked familiar and asked him if he had been in any August Wilson plays. He replied that he was in Fences, then added, “The movie.” I immediately had an answer to why he looked familiar. It was Russell Hornsby, who played Lyons in the film. He said he was in town for the opening weekend of the August Wilson House. Hornsby had a part in making that dream become a reality. Also on hand for opening night was the skilled Wilsonian actor Wali Jamal, who has acted in all 10 of the August Wilson Pittsburgh Cycle plays.

It was a magical weekend at the August Wilson House on Bedford Avenue in the Hill District. Saturday was the ribbon cutting ceremony for the restoration of August Wilson’s childhood home. Part of it is restored to the period of time that Wilson and his family lived there and part of it has been repurposed into a contemporary art studio and exhibition space for the Hill. The restoration was started and overseen by Paul Ellis, August Wilson’s nephew. Many others helped. Pfaffmann + Associates was the architecture firm for the restoration. Denise Turner is president of the August Wilson House and acting chief executive.

Denzell Washington has the rights to produce all 10 of August Wilson’s Pittsburgh Cycle plays as films. He has already done so with Fences and Ma Rainey’s Black Bottom, both of which were nominated and won several Academy Awards. Washington was one of the lead fundraisers for the August Wilson House and was on hand Saturday for the ribbon cutting ceremony. 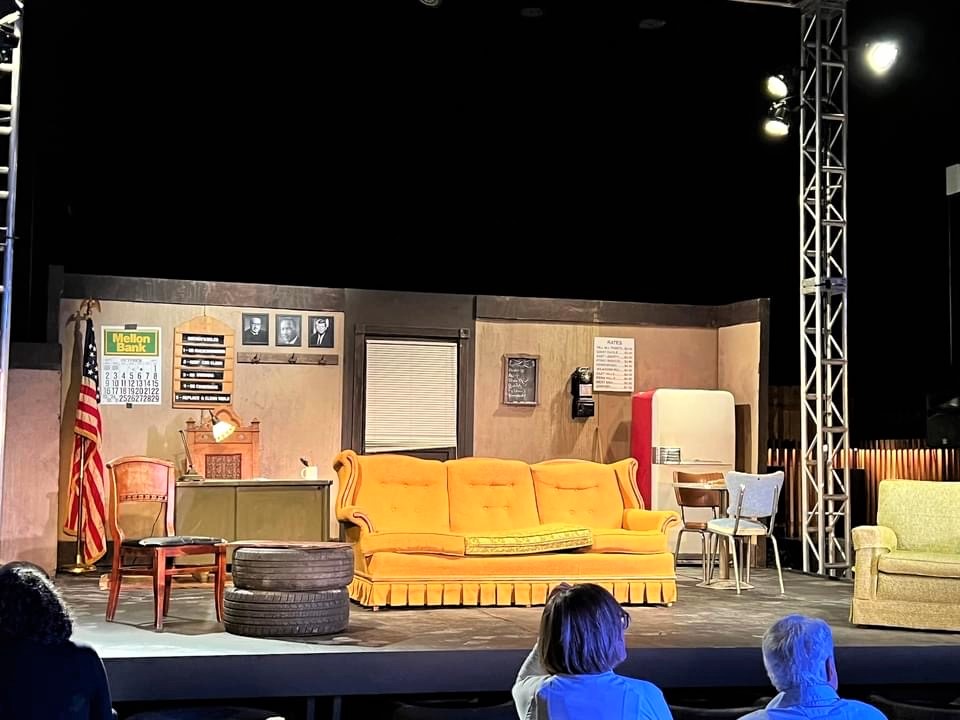 The set of ‘Jitney.’