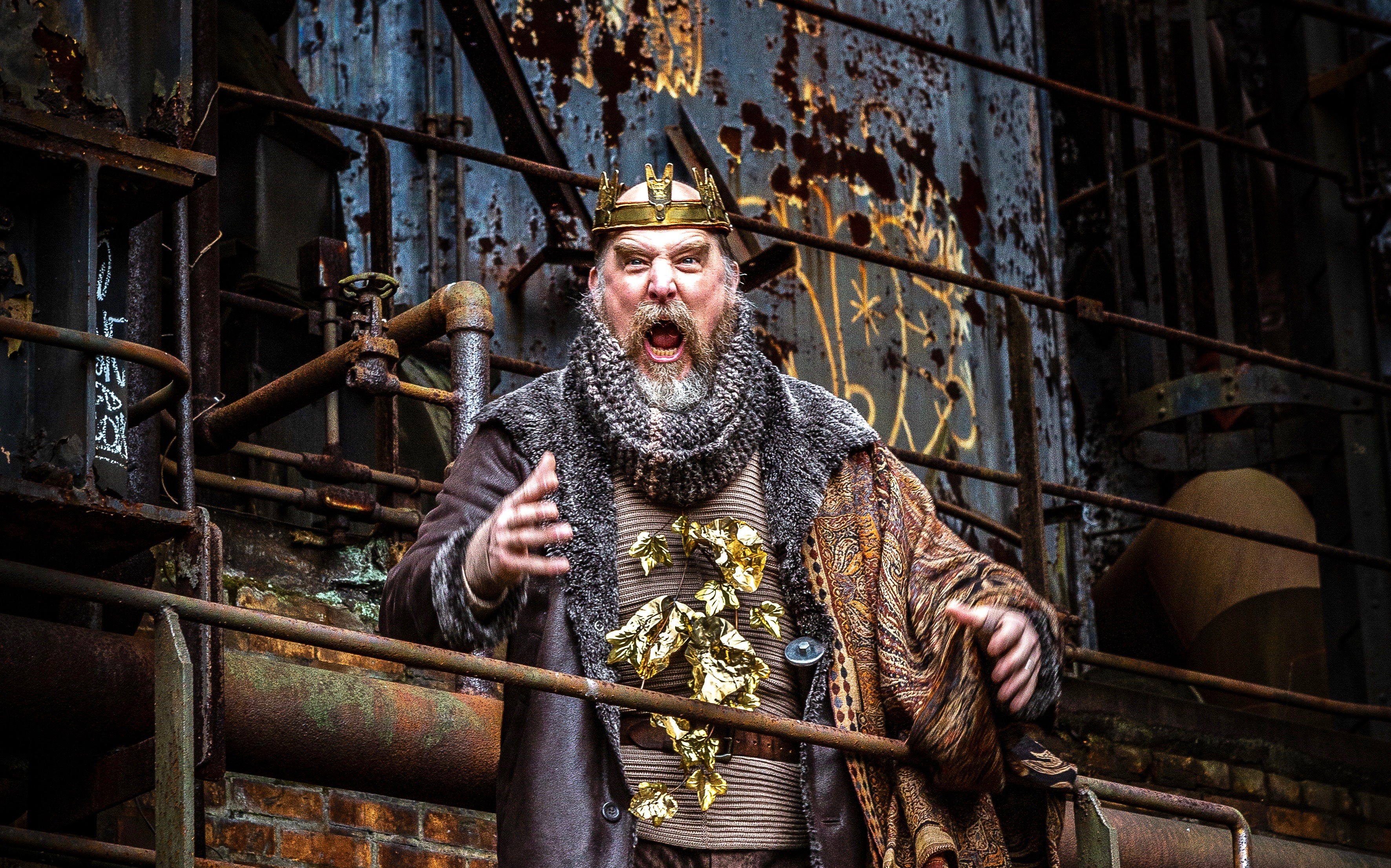 The king will see you now, while he’s raging against the machine. Jeffrey Carpenter roars as Lear.

“Awe” is a good word. It sounds like how it feels. When you step amid the towering ruins of a once-great society—such as the massive, eerie, Carrie Furnaces, the abandoned industrial complex that is now a historic landmark—you gaze up and around, and your heart’s breath goes “ahhhhhh …”

So, yes, Quantum Theatre’s decision to stage King Lear at the Carrie Furnaces is a pretty awesome idea. The Shakespeare tragedy is, itself, filled with violent turns of events which evoke shock and awe. And the shocks do not come only from the escalating violence—e.g., the scene that crests when villains rip out Gloucester’s eyes, then crests again in a howling knife-fight.

Lots of cheesy movies will give you gruesome Jack-the-Ripper scenes. That’s shock bought cheap. What is richer in King Lear, and more profoundly evocative of awful awe, is how the play reveals what’s behind the ripping. It’s the tortured hearts and twisted minds of characters who believe they are going for greatness (or at least for what they think they deserve), but in fact go on to display endless varieties of madness. From lust for power to misguided lust for love, and from self-delusion to slippery deceit to existential rage at the state of the universe, the Lear gang covers the spectrum.

Quite an achievement for the human species, to be capable of so much crap. It takes your breath away. And there’s no better place to experience it than the Carrie Furnaces.

All the Backstory You Need

The plot in a nutshell: Aging King Lear (played by Jeffrey Carpenter) wants to divide his kingdom among his heirs and retire happy. If that strikes you as a pair of desires that will not go together, you are right. The seeds of discord are sown quickly. Lear madly gives power half-and-half to the two daughters who flatter him from the bottoms of their serpentine hearts, super-snake Goneril (Lissa Brennan) and wannabe Regan (Dana Hardy). Faithful trueheart Cordelia (Catherine Gowl) gets nothing.

This setup, to be honest, is rather cheesy in its own right. It is a setup for moralistic melodrama of the type found in a folk legend, which is where Shakespeare got it from: the legend of just such a king and his daughters. But Shakespeare enhanced and altered the rest of the story, taking it to places the folk tale didn’t go. The rest is a spiraling, tangled web of the aforementioned forms of madness. These are interspersed with the efforts of a few actual good guys trying to make things right. They are swimming against the tide. Lear goes totally, royally mad. There is some comedy, but after all it’s a tragedy. Curtain.

The unique story here is what Quantum’s production does with the play. It uses a script edited and shortened by Shakespeare scholars James Kincaid and Julian Markel. Tightening Shakespeare is generally helpful, though I had some bits of early trouble figuring out what was going on, which may be my bad or just due to the play’s complexity. The unsure parts didn’t matter, however, and the production swept me past them anyway with the sheer spectacle and emotion it creates.

High points? Start with the opening. Melodramatic and a little schmaltzy in terms of scripted content, but ne’er has such stuff been so grandly rendered. Picture the rusty steel-clad towers and galleries of the Furnaces looming over the open-air performance area in the gathering dusk. Enter clanking, medieval men of steel, fronted by the booming voice of good Kent (played powerfully by Monteze Freeland) … and enter Lear and his retinue, while many voices rise and boom in a chanting song.

The song is “Which Side Are You On?”, a workingman’s anthem from the 1930s. It’s one of several direct allusions to the steeltown setting of the play, and though it is a non-Shakespeare insertion, wow does it set the tone. The entire scene thunders with ominous omens done BIG. 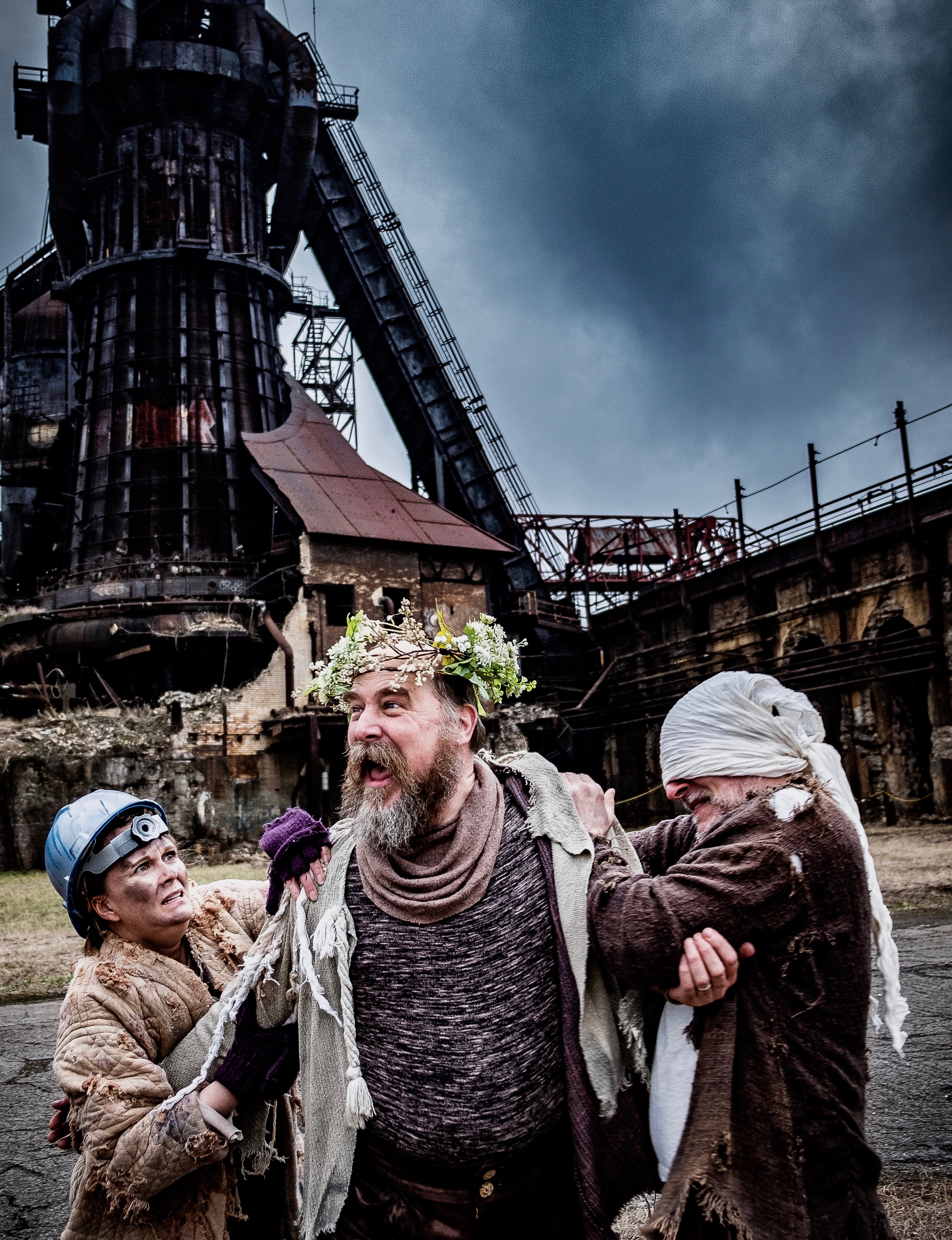 There are places in Quantum’s Lear where the bigness of the production forces a sacrifice. Some chances to have scenes with moments of quiet intimacy—and to convey intimate tensions or touches—are lost in the vastness of the space and the consistently high-wire tones of the performance. Or so I felt.

On the other hand, there are scenes in which the lost-in-space effect works well, casting a spell that adds power. One is the scene where Gloucester (Ken Bolden) gets his eyeballs ripped out, followed by the villains getting into a deadly brawl with knives.

The sequence is played far from the audience, up on a balcony-walk around the base of a furnace. The characters are acting out feelings that consume them, inflame them. Gloucester is writhing in pain and terror; the others are bellowing angrily over contentious matters that mean everything to them. And yet these humans look so tiny, so insignificant, against the immensity of the ancient furnaces that stand silent, impervious to the crises that determine the fates of mortals. Watching this made me feel: That’s how we roll, isn’t it. With our tales full of sound and fury, signifying nothing.

King Lear’s second act (the production has only two) is played in another part of the grounds. Here, the nature of the setting is different. The audience is seated facing away from the furnaces so they’re out of sight, while the actors perform in a little arena-like patch of grassland and trees. It is indeed a more intimate venue, well suited to Act II, which is short but contains the denouements. When you watch characters die, their deaths inhabit the space more fully.

And by the way, to reiterate a key point: Throughout King Lear, the emotional effects are produced by more than the physical settings and staging. The play does happen to be known as a moving one. I was moved, and think the performers might have had something to do with it as well.

I won’t name all my favorites among the cast. Just saying there are more than a couple. King Lear is selling out. If you want tickets, act now.

Through June 2 at the Carrie Furnaces National Historic Landmark Site, courtesy of Rivers of Steel National Heritage Area.The address is Carrie Furnaces Boulevard, Swissvale; the site straddles Swissvale and Rankin. For tickets and other information visit Quantum on the web or call (412) 362-1713.

Quantum Theatre’s Artistic Director, Karla Boos, has done it again—whatever she does to pull together people who create a memorable experience.