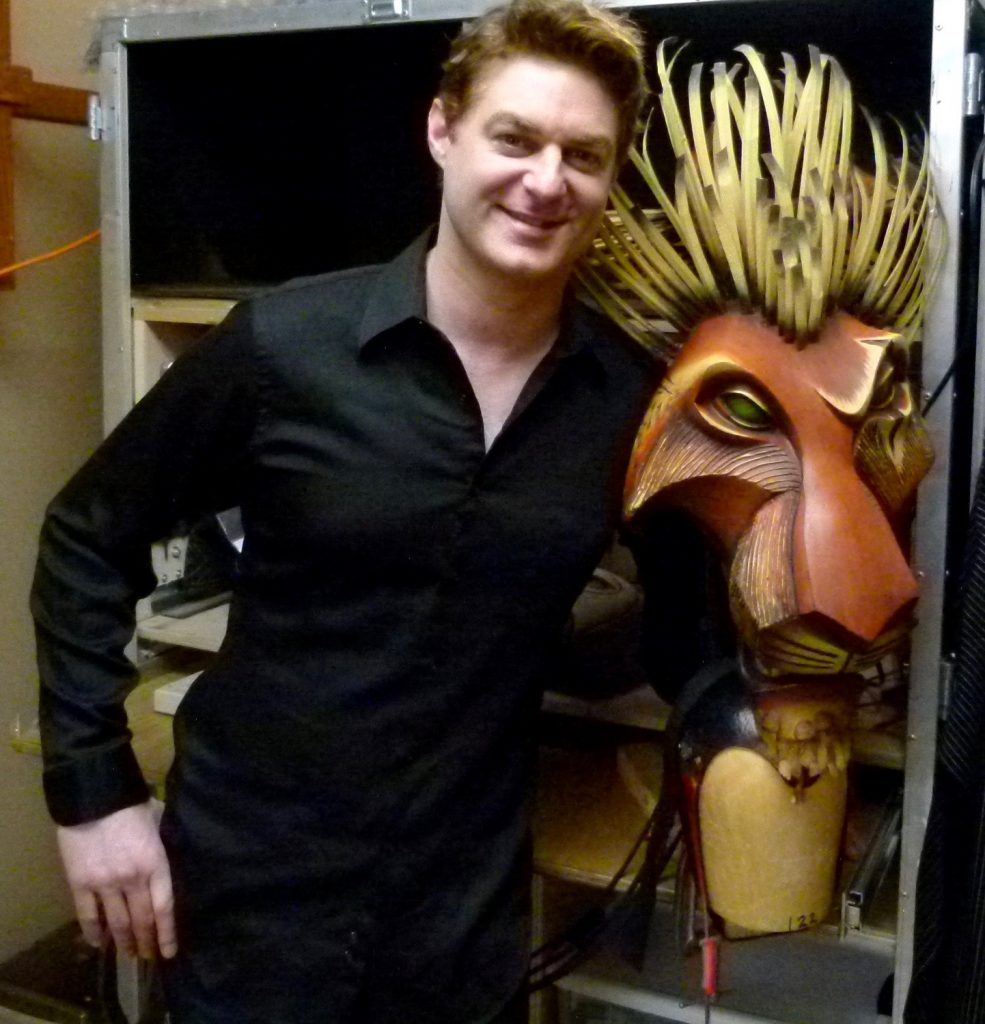 Spencer Plachy with the mask he uses when portraying the lion Scar.

The North American touring production of Disney’s The Lion King is onstage at the Benedum Center through September 29. Entertainment Central, along with other members of the Pittsburgh media, was invited to the Benedum for a behind the scenes look at The Lion King. Three of the main pillars of the legendary musical are the acting,  puppets and costumes, and sets. We had an opportunity to speak with Spencer Plachy, who plays the bad lion, Scar, and puppet master Michael Reilly, and also to see a main set piece, Pride Rock, in action.

Noted actor Spencer Plachy played the role of Scar on Broadway and reprises it in this touring production. The Houston native, who also grew up in Colorado, said that when he plays Scar he wears a form-fitted helmet on which his Scar puppet mask is affixed. The mask, although large, is not very heavy, allowing him to be very agile in the role. He mentioned that the character Scar is jealous of his brother, King Mufasa, and is disrespectful to him to his face—that he is the typical younger brother who feels his big brother gets everything and he gets seconds.

Puppet master Michael Reilly told Entertainment Central,  “It’s a honor to be in charge of these amazing puppets. There are over 230 puppets in The Lion King. I have to wear a lot of different hats as there are many different types of puppets in the show. One of our concepts that we did in moving the show from cartoon to stage was not to fully cover the people in the puppets, to have integrated action between the person and the puppet.”

I saw mobile cabinets filled with many types of replacement parts. When I asked Reilly if the puppets occasionally break, he replied, “Yes, every puppet breaks on a weekly basis.” I told him that’s not surprising with all the action on the stage with the puppets, that people might sometimes bump into each other. I also asked if that was why the orchestra pit is covered with a black mesh netting. Reilly, who hails from Toronto, said that during the opening entrance scene one time, the elephant puppet lost balance running up the steps to the stage and fell over onto the netting. The four-man crew were stranded on their backs like an overturned turtle. Then one of the actors who had a bird puppet put it down and got the elephant back on its feet.

We also had an opportunity to see one of the main set pieces, Pride Rock, move along the stage via remote control. Head Carpenter Lindsey Rollins skillfully demonstrated its movements with her remote control. Backstage was amazing too with all the different costumes and set pieces including the very creative elephant graveyard set. Pictures were not allowed in the backstage area. It was a fantastic behind the scenes look at the highly creative, award-winning musical. 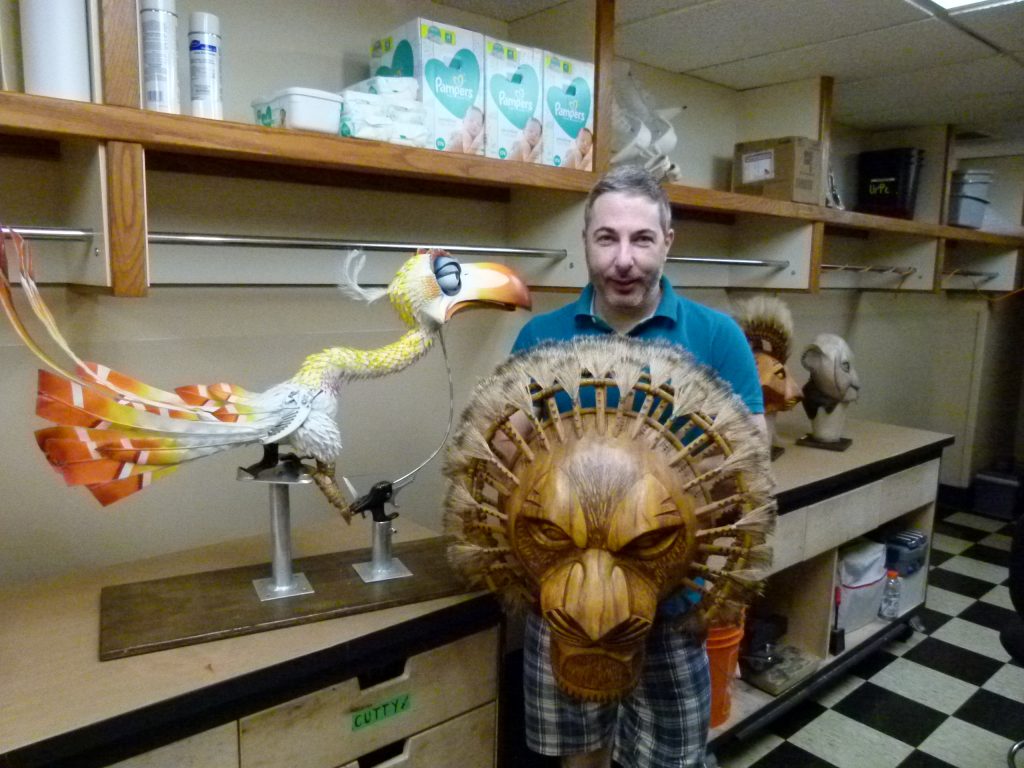 Puppet master Michael Reilly with his favorite mask, Mufasa, with the Zazu puppet looking on. 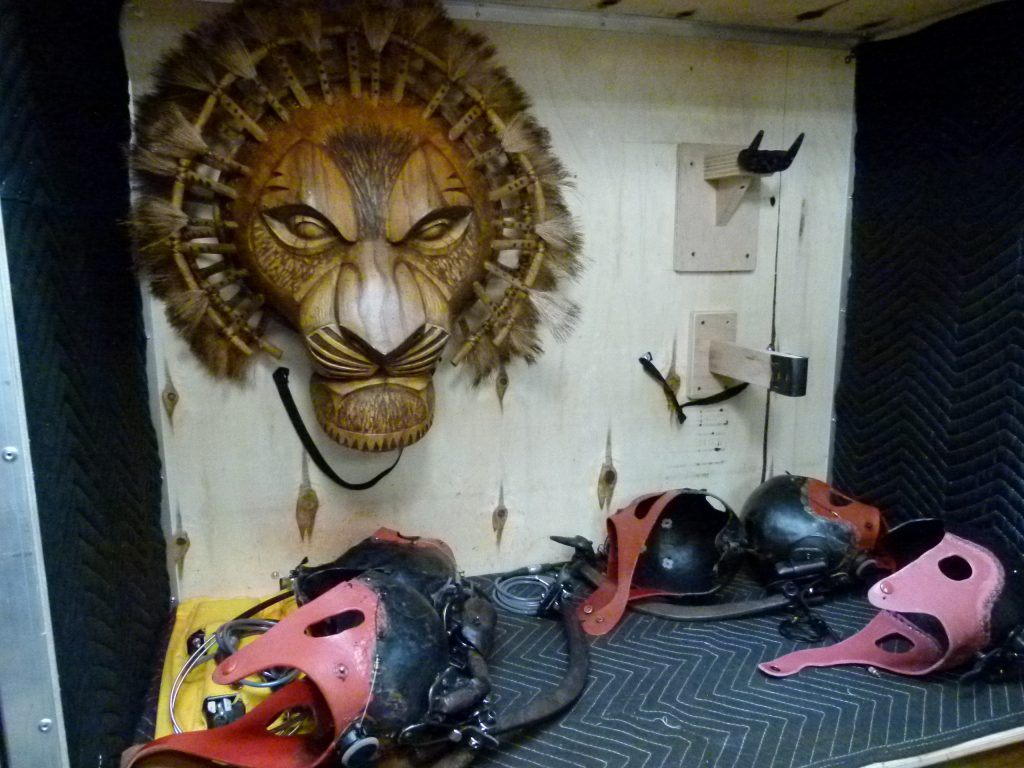 Several components of the Mufasa puppet/costume. 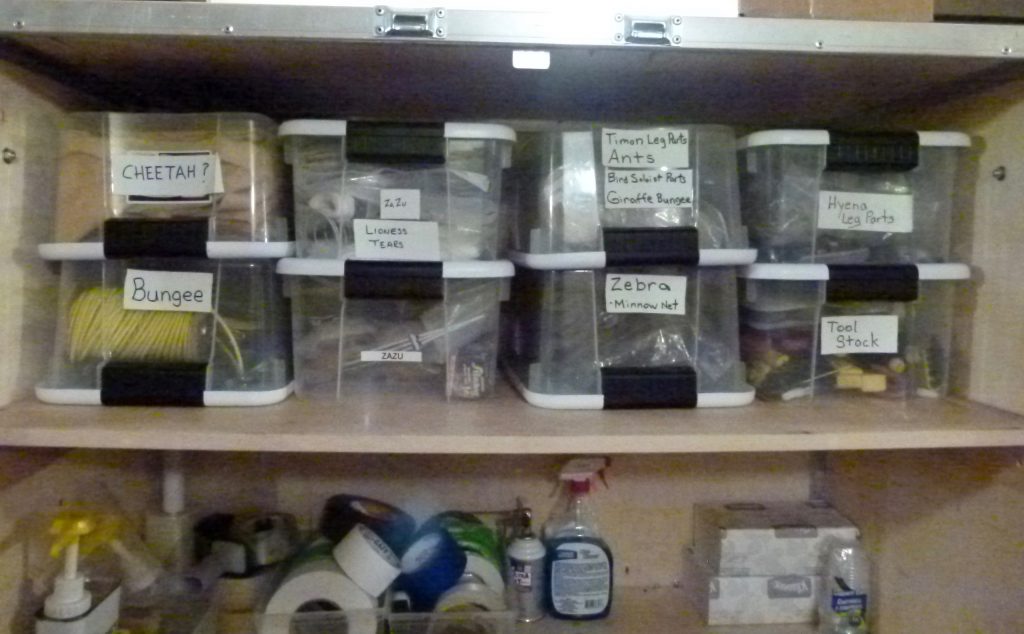 Spare parts for puppets and other materials.

See our review of The Lion King.