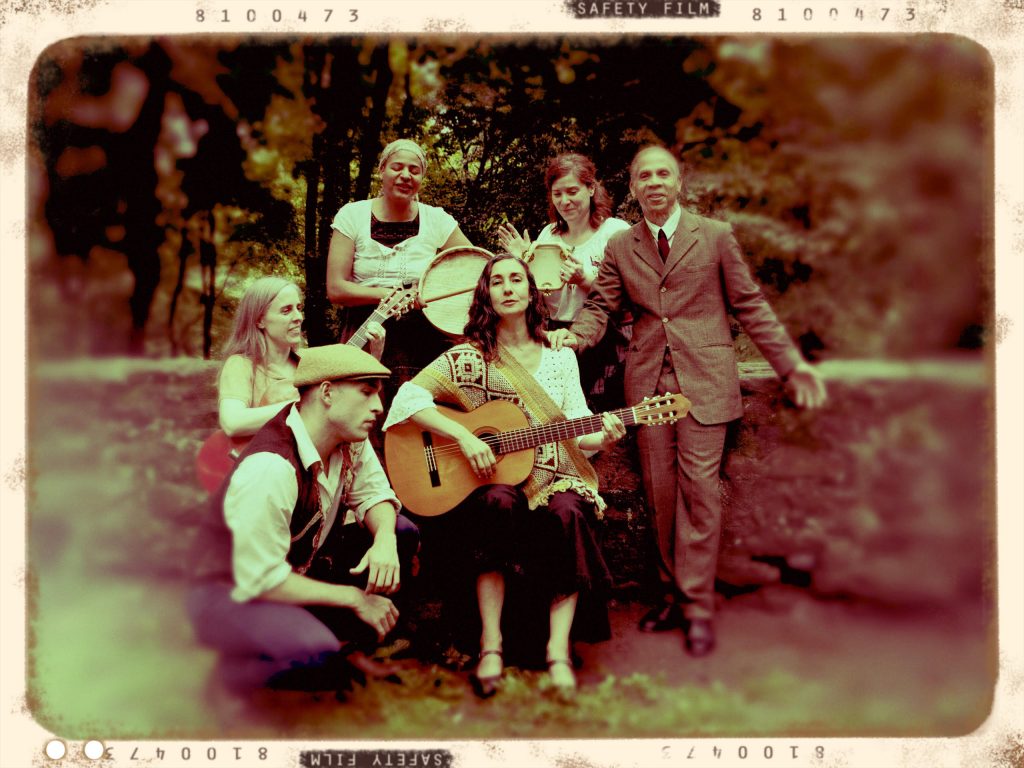 Quantum Theatre opened its 2019-2020 season Saturday night with Looking for Violeta. Like their last play of the previous season, King Lear at Carrie furnaces, Violeta is also being staged in an outdoor setting. The play’s venue is in a tent at Frick Park next to the lawn bowling greens on Reynolds Street in Point Breeze. Looking for Violeta continues through August 25.

An Inspirational Trip to Santiago, Chile

Quantum Theatre, under the direction of Artistic Director Karla Boos, took a big risk with this production. They created this musical from the ground up. The idea came when Boos and her longtime friend and collaborator Carolina Loyola-Garcia were attending a theater festival in Santiago, Chile, and were staying with Loyola-Garcia’s family (she is a native of Chile). Loyola-Garcia’s sister Gloria drove them around Santiago and on those drives played music on the car’s stereo. Boos was especially enthralled with the music of Chilean folk legend Violeta Parra. Gloria suggested that Boos develop a play about Parra. And that’s just what she did.

Boos, Loyola-Garcia and other collaborators started developing the concept.They retained the noted Chilean writer María José Galleguillos and worked with her on the script via Skype calls between Pittsburgh and Santiago. Boos and Loyola-Garcia recalled in a conversation after the show about how they were at an early meeting regarding Violeta at a coffee shop. They said, “We were all wondering to ourselves if this was too crazy of an idea and if we should maybe not pursue it. No one raised that concern though.” Then they both laughingly said, “We should have been wondering if it was not crazy enough for us to do.” Quantum is known after all for often producing edgy, highly creative productions.

They agreed that Loyola-Garcia would play Violeta. Emily Pinkerton, an ethnomusicologist and composer (and half of the folk duo The Early Mays) composed original music for the production based upon her studies of Violeta Parra while previously living in Santiago for two years. Daniel Nesta Curtis, director of the Contemporary Ensemble at Carnegie Mellon University, signed on as Music Director.

The promotional artwork for Looking for Violeta had the words “Folk. Hero.” on it. Notice the period between the two words. The period shows that there were two main components to her success. Parra was not only a folk hero, but also a folk song star in writing and singing her songs and in publicizing and preserving the music of other South Americans. She was also a supporter and advocate for the poor and oppressed. 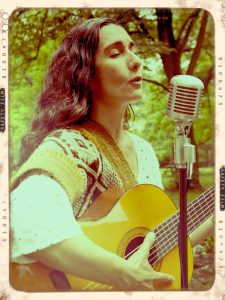 Violeta Parra was a complicated person whose life had many highs and lows. She was twice married and divorced and two of her children died. The musical chronicles those ups and downs through songs, dance, and spoken word. Her brother the famous poet Nicanor Parra, portrayed by Eugene Perry, provided a lot of plot information through his song lyrics. Perry did a fine job in the role, with both his acting and singing. He is a bassist-baritone singer and has done operatic roles and even toured as Porgy in Porgy and Bess.

The multi-talented Carolina Loyolla-Garcia was amazing in the fast-paced role. Her acting, singing, and dancing were sublime. She’s also very good with her facial expressions, sometimes subtle, sometimes intense. Loyola-Garcia has appeared in several Quantum plays and is the leader of flamenco ensemble Alba Flamenca and the organization Flamenco Pittsburgh.

Both Loyola-Garcia and Perry had a very touching story line in the musical. It was centered on how Violeta and Nicanor both loved and supported one another throughout their lives. They had several powerful scenes. One was when he encourages her guitar playing by singing “I know your guitar has a plan.” Another is when he returns home from his studies and is quoting great works of literature to her including Shakespeare. When he is finished she replies, “We are good in Chile, our fields are full of verses, our own.” 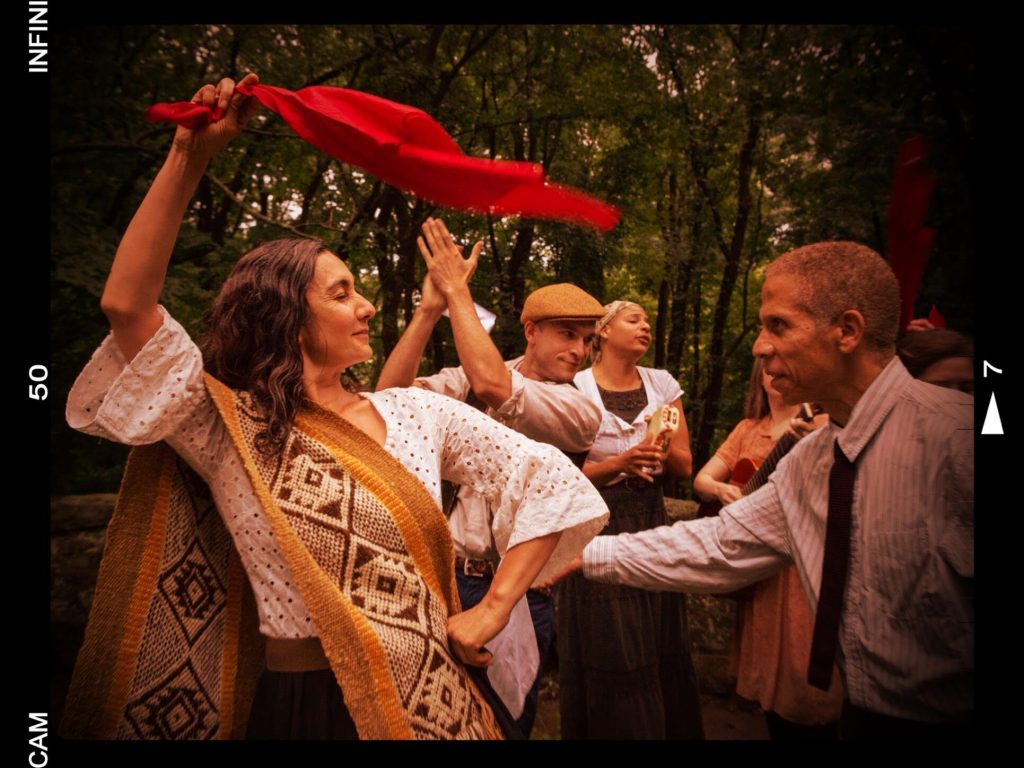 Violeta Parra (Loyola-Garcia) dancing with her brother Nicanor Parra (Perry) as the ensemble joins in the fun.

There were many compelling musical numbers composed by Pinkerton and sung by the cast. They included (the exact titles weren’t listed): “Biggest Sibling and the Last,” “One Little Bird,” “Little Angel,” “No First Without the Second,” “Winding Rivers Never Sleep,” and “You Had Control.” In addition to composing the songs, Pinkerton acted and sang in the cast, played several guitars including the 25-string Chilean guitarrón, and the charango.

Other talented members of the ensemble cast are Kelsey Robinson, Jerreme Rodriguez, and Raquel Winnica Young. All contributed melodic singing and good acting to the musical.

Looking for Violeta ran through Parra’s rough childhood, marriage to a communist machinist who didn’t want her to perform anymore, loss of two children, singing success, making recordings of other performers music, persecution by the government for her politics, and her embroidery display at the Louvre in Paris, and more. The audience is helped to identify the period of Parra’s life by fabric signs that are removed from two hooks on the stage. If you miss or don’t quite get the full meaning of a scene, just relax and enjoy the music, singing and dancing. There were some nice touches of humor in the play. 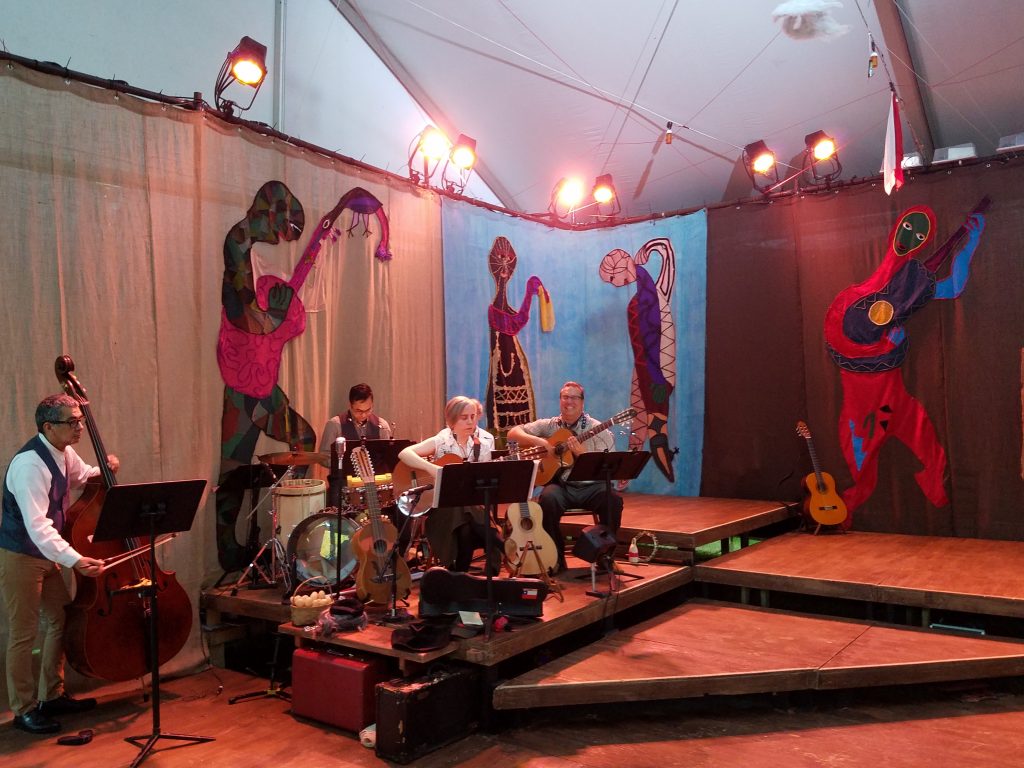 The band was situated onstage for the performance. (photo: Rick Handler)

The musical was 80 minutes with no intermission and ran like clockwork under the stage direction of Karla Boos. Looking for Violeta writer Maria-Jose Gallegillos was on hand for opening night. Loyola-Garcia’s sister Gloria will attend the show mid-month.

Sometimes risk is rewarded. “Looking for Violeta” is an instance where it should be. The opening night crowd seemed to enjoy the production, so it may be a good idea to get your tickets sooner, rather than later. Caution: the play does contain the sound of a gunshot. 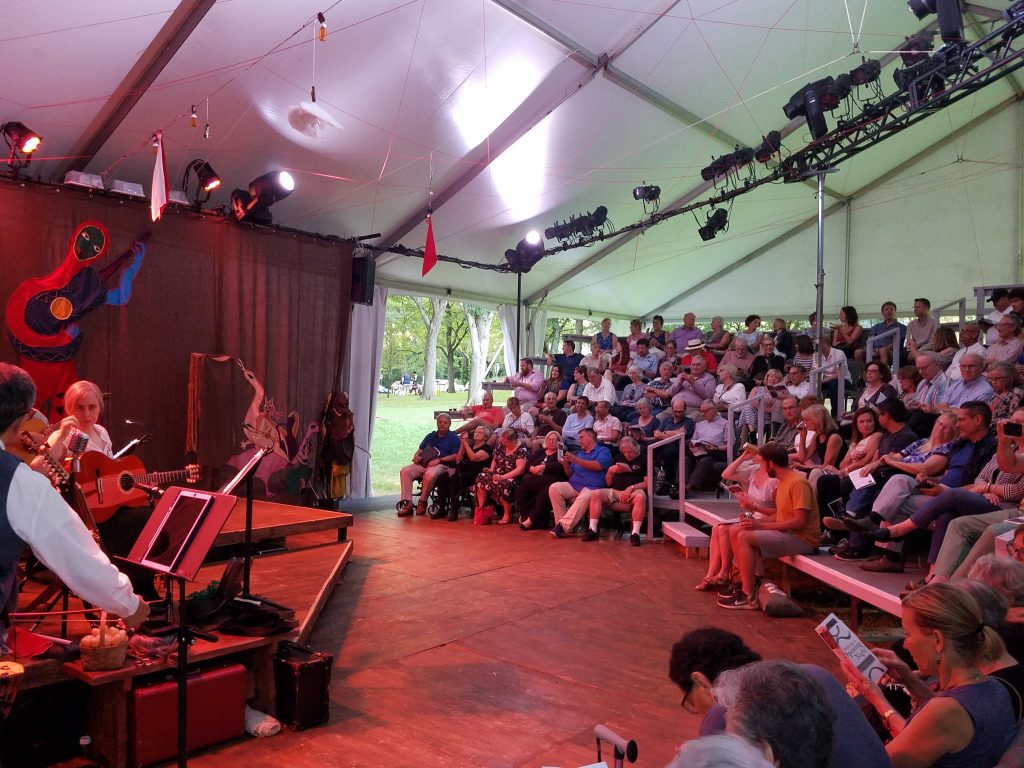 The audience is close to the action under Quantum’s tent. (photo: Rick Handler)

Photos unless otherwise noted are by Heather Mull with processing by Boom Creative.