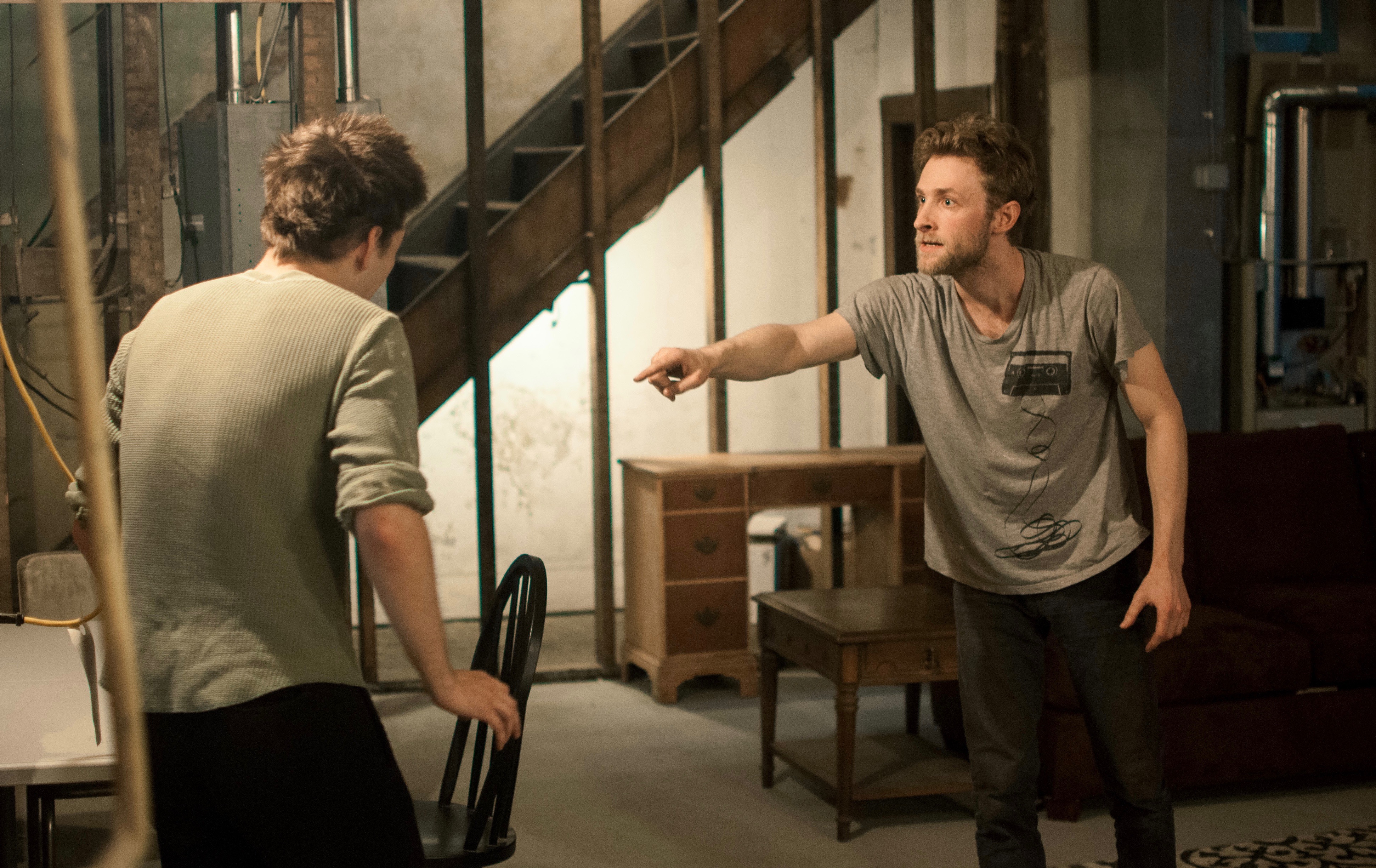 Big brother Treat (Max Pavel, R) lives outside the law, but at home, he lays it down ferociously. ‘Orphans’ photo: Nicolette Kalafatis.

One of the best deals in the experience economy is the new Pittsburgh production (through June 23) of Orphans. Tickets to this shockingly good two-hour play are $15. Here’s how it compares to other experiences on the market:

A tasty bougie burger with artisanal dressings? For about the same price, Orphans has much more meat.

Two hours of psychotherapy? No contest. Orphans explores more psychic territory at a fraction of the cost.

Live music? Well, music at any price is good. But live theater does things to an audience that concerts cannot, and those things are done extremely well in Orphans.

It’s a play that races back and forth across all 88 keys of the emotional piano, from “You’ll laugh” to “Whether you cry or not, there are moments of wrenching existential despair.” You couldn’t buy stronger actors than the men in the show: Each character carves a presence that will leave aftereffects. The intimate performance space, at the aptly named Aftershock venue in Lawrenceville, puts you close enough to see the whites of their eyes.

You may also wish to contemplate the creamy whiteness of the giant-sized jar of Hellman’s mayonnaise. At one point it becomes a touching symbol of misguided, and unrequited, love. More about the mayonnaise moment shortly.

The Switchblade, the Tuna, the Big Fish

Orphans is a crime-and-family tragicomedy from the 1980s. Playwright Lyle Kessler set it in his native Philadelphia. When the play begins we meet two young men, orphaned brothers, living in a decrepit row house left to them after Dad ran off and Mom passed away.

The boys have formed a symbiotic relationship that no social worker would approve. Older brother Treat (played by Max Pavel) rules the roost. Treat is a manic trickster, gleefully bringing home wallets, jewelry, and anything else he can rob from passersby at the point of a switchblade. Meanwhile, younger brother Philip (Dylan Marquis Meyers) never leaves the house. And why he doesn’t is a mystery.

Philip’s oddly warped speech and loopy, cringing gait suggest that he might have a mental/motor disorder. Yet sometimes he flashes grace and eloquence. In a comical early scene, he sashays around the living room, artfully mimicking men and women he’s seen on the street through his lonely window. Is Philip, perhaps, a savant in arrested development?

At any rate, he’s gullible. Not only does he believe Treat’s warnings that he will die if he ventures outdoors, he looks up to his hard-working elder. Big brother watches over him. Big brother provides the StarKist canned tuna—the protein-rich brain food that Philip devours daily, while watching “The Price Is Right” and movies on TV and memorizing every word.

This entire spooky setup is unfolded rapidly, in the first 10 minutes or so of Orphans. I found it so compelling I couldn’t tell what was grabbing me most: Philip’s haunting and weirdly caged humanity, Treat’s perilously twitchy energy, or the crackling (and often absurd) interplay between them. Treat describes, with scorn, a victim who had the nerve to object to being robbed: “He cursed me!” Philip’s horrified reply: “He cursed you?” Treat: “Terrible fucking filth …”

And that’s just the setup. The action gets rolling when Treat reels in a really big fish. One night he brings home a guy he met in a bar. Harold (Ken Bolden) is a suave, impeccably dressed older fellow. Harold’s attire, and the fine briefcase that he totes, bespeak glorious affluence.

He also happens to be gloriously drunk. Which, to Treat, prompts the obvious idea: Kidnap the dude and hold him for ransom. 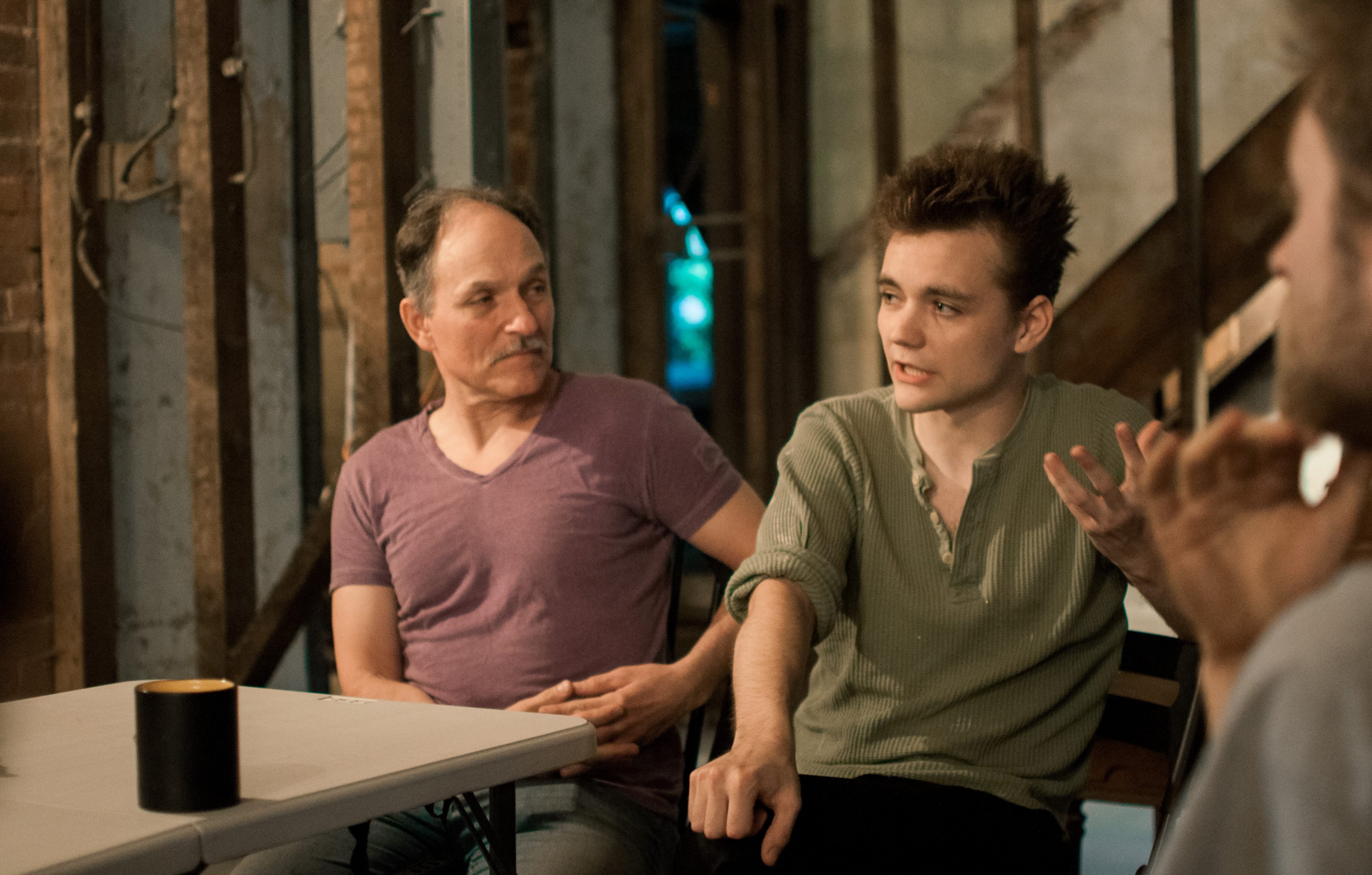 Even at a rehearsal chat, they’re in character: that’s Ken Bolden (quite composed as dapper Harold) listening to Dylan Marquis Meyers (Philip) explain his predicament.

A New Twist on ‘Oliver Twist’

Bad plan. Next morning, Harold deftly escapes the ropes he’s been tied in. Turns out he knows the ropes, being a big-time gangster from Chicago, with a pistol concealed on his person.

But just when it appears the jig is up, a new and stranger dance commences. Harold has a plan, too. He likes Treat and Philip. They remind him of his own orphaned upbringing, long ago on Chicago’s mean streets. So he will abide with the boys in their humble abode as a father figure and mentor.

Harold will teach poor Philip to enjoy a high life, beyond the confines of canned tuna and TV. And he will make Treat his apprentice in high crime, channeling the kid’s violent impulses into the controlled mischief that can pay off splendidly.

In short, Harold will re-enact the role of master criminal Fagin in Charles Dickens’ Oliver Twist, except that he intends to flip the script. Whereas the original Fagin was a despicable orphan-runner, greedy and cruel, Harold will be a benevolent Fagin, the very model of a modern American life coach. In the white-collar gangster category, that is.

What could possibly go wrong?

The Rest of the Story (with Closing Credits and Ticket Info)

Spoiler aversion forbids me from telling more. I’ve decided to not even spill the scoop about the mayonnaise. Go and see for yourself.

Lyle Kessler’s Orphans premiered in L.A. in 1983. It became a hit when Chicago’s Steppenwolf Theatre picked it up in ’85, with a production which then moved to New York and London’s West End. A 1987 movie version was made starring Albert Finney as Harold.

But please don’t settle for flickering images on your home screen. Orphans deserves to be experienced live, in the flesh. And the Pittsburgh production embodies the play powerfully.

There hasn’t been much publicity concerning it because it’s a budget-conscious DIY affair, put together by a top team of local theater artists. Actors Bolden, Pavel, and Meyers—who play their parts to screaming-yet-subtle perfection—are joined by the formidable Ingrid Sonnichsen as director, and Cotter Smith of Netflix’s “Mindhunter” as acting consultant.

The Aftershock building—a former Slovenian social hall, now in renovation—makes an ideal setting for Orphans. It is majestically semi-finished, with old features and construction wounds still showing. (Rest assured, however; the new restroom is squeaky clean.)