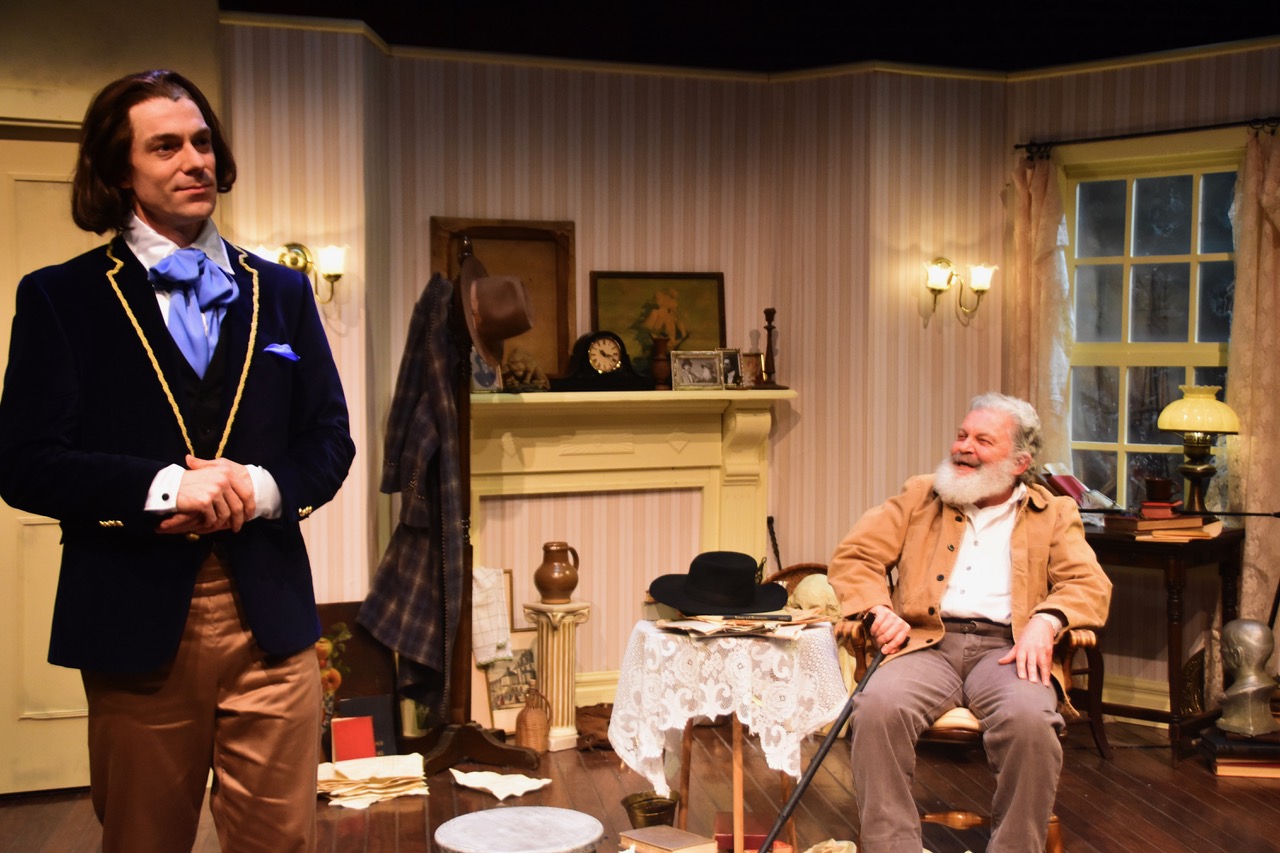 It is a pleasure to recommend the U.S. premiere of Oscar & Walt at Kinetic Theatre in Pittsburgh (through November 20). You never know what you’ll get with a show based on real events and persons. Some are dazzling spectacles, like Hamilton or Paula Vogel’s Indecent, whereas others leave you squirming through a stilted docudrama. Oscar & Walt is neither spectacular nor stilted. It’s simply good theater.

The playwright, Donald Steven Olson, has scripted a fictionalized treatment that rings true to life. Kinetic’s production turns the meeting of two remarkable men into a funny but ultimately moving story. Almost anyone can relate to it, for although the great are different from you and me, they’re human. They put their pants on as we do and sometimes, figuratively speaking, they are caught with their pants down. This ground-level, shared humanity is the level where Oscar & Walt hits home.

Knowing a bit about the play’s historical context is helpful. So, rather than offering a detailed review—which would tip off some subtle twists, spoiler-wise—here is a mini-review mixed with all the facts you should need.

The year was 1882: a time when poetry and serious literature were taken seriously. Newspapers in the United States gushed about a young Irish phenom who’d stirred up the cultural scene in London, and had come to our land on a speaking tour. At a stop in Philadelphia, 27-year-old Oscar Wilde told the press he admired the American poet Walt Whitman. Whitman was then 62, recuperating from a stroke while living nearby with his brother and sister-in-law. The old literary lion invited the up-and-comer to his den for a chat.

Their meeting was bound to be momentous, and since we don’t know exactly how it went, Oscar & Walt speculates. Actor Nick Giedris is spot-on as Wilde. Sporting a glossy hairdo and 1800s dandy duds, he looks like Wilde, which puts an exclamation point on the illusion. Sam Tsoutsouvas, capable of flashing from benevolence to thunder, is the right choice to play a stormy Whitman. Lisa Ann Goldsmith buzzes deftly in and out as sister-in-law Louisa, nicking the men with conversation interruptus.

But the best aspect of the play is what it does and what it refrains from doing. Real-life Oscar and Walt were separated by more than age. They came to the culture trade from opposite directions. Wilde was a witty and cerebral Oxford graduate; Whitman a self-made jack of many trades who gloried in the rough-and-tumble life he had lived. It would’ve been easy to write a reductive play that sensationalized these contrasts: a satirical romp, or an exercise in intellectual fireworks. Indeed, there are elements of both in Oscar & Walt. What comes across strongest, though, is how the odd-couple characters stumble and stutter-step past their differences, exposing flaws and trading embarrassments as they strive for genuine connection.

Wilde in 1882 was still far from becoming a great writer. His first volume of poems had been dismissed with a kill shot in the magazine Punch: “The poet is Wilde, but his poetry’s tame.” Oscar’s reputation, at the time of his visit, rested on being what we would now call an influencer.

From his university days through his entry to London society, Wilde made his mark as an advocate of the Aesthetic Movement. He and his culture-war comrades insisted that art was to be enjoyed for art’s sake—for the sheer sensory pleasure it gives, instead of for any practical morals or noble values it might teach. In keeping with that stance, Wilde embraced the role of making himself and his surroundings into gorgeous works of art. Thus the famous epigram from his time at Oxford, where he adorned his student rooms with peacock feathers and fine porcelain—“I find it harder and harder every day to live up to my blue china”—and thus the speaking tour, in which he lectured on, among other subjects, the joys of interior decoration.

For his grand entry scene in Oscar & Walt, Wilde breezes into Whitman’s cluttered den like a peacock in a pigsty. He greets the older man with the same words real Oscar reportedly spoke: “I come as a poet to call upon a poet.” This with a grand gesture, followed by further ruffles and flourishes, until it grows evident that the act is painfully awkward. Perhaps you’ve had a similar feeling, suddenly realizing that the put-on-a-show style you use in front of an audience does not work when trying to relate one on one.

To Oscar’s credit, he reads the scoreboard and adjusts. And gradually, the tension that has filled the stage eases up. For a while. That kind of touch, throughout, makes the play feel real. 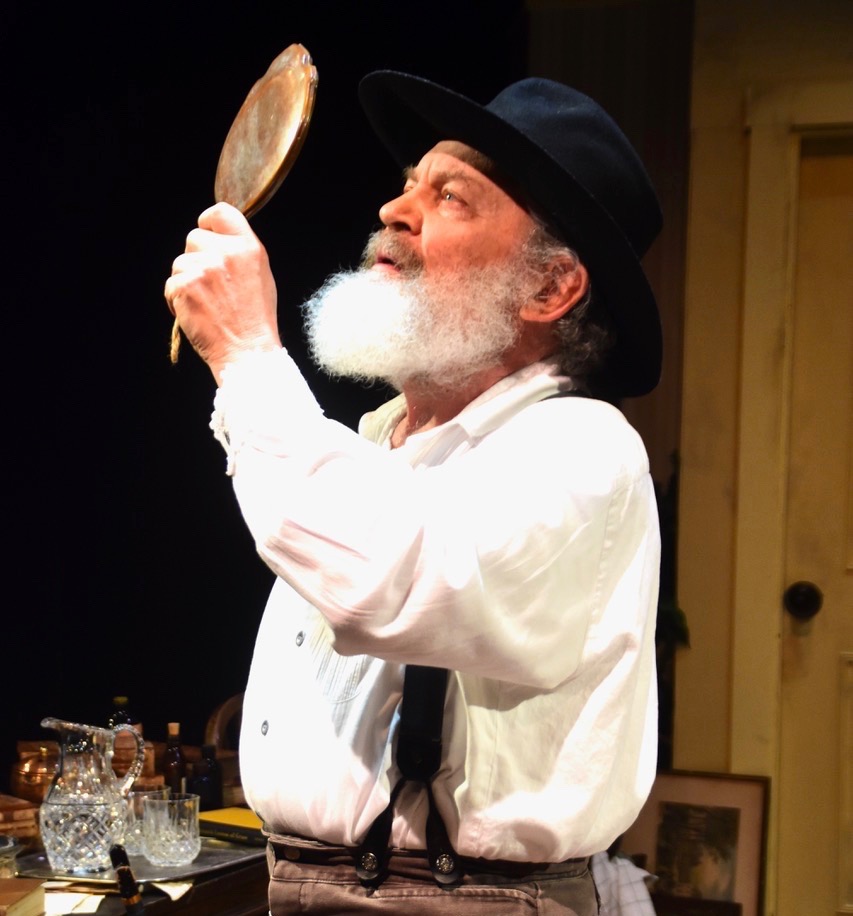 Does art mirror life, or life mirror art, or is it just me? Walt ponders the big questions always. (Photo: Suellen Fitzsimmons.)

As for Whitman: He was a whirlwind. A legend in his own time and unto himself. If you want to do some advance reading for Oscar & Walt, skip the men’s Wikipedia entries and plunge straight to their actual writing. Whitman’s collection of poems, Leaves of Grass, is a breathtaking experience. The man didn’t play the poetry game for small stakes. Line after line and page after page, in tumultuous waves of free verse, he went for a cosmic consciousness—not transcending the physical world, but embodying it, as in these lines from “Song of Myself”:

To me the converging objects of the universe perpetually flow, / All are written to me, and I must get what the writing means.

There’s an upside to having a giant ego. If you let others in, it gives them room to expand. And possibly a nudge of that sort happened when Oscar met Walt. Looking at Wilde’s later works, you will find they often convey a substance greater than pretty window dressing and snappy one-liners. Try The Picture of Dorian Gray. Or any piece you may choose.

One final note. Speaking of voices of sexes, Wilde and Whitman shared a deep inner quality. Both men loved men. That, too, comes out in the play, but I won’t say how. See Oscar & Walt.

Scenic design is by Johnmichael Bohach, with lighting by Christopher Popowich, sound by Angela Baughman, and costumes by Kim Brown. The production stage manager, Megan Mercer, sees that the play runs smoothly for 90 minutes without intermission.