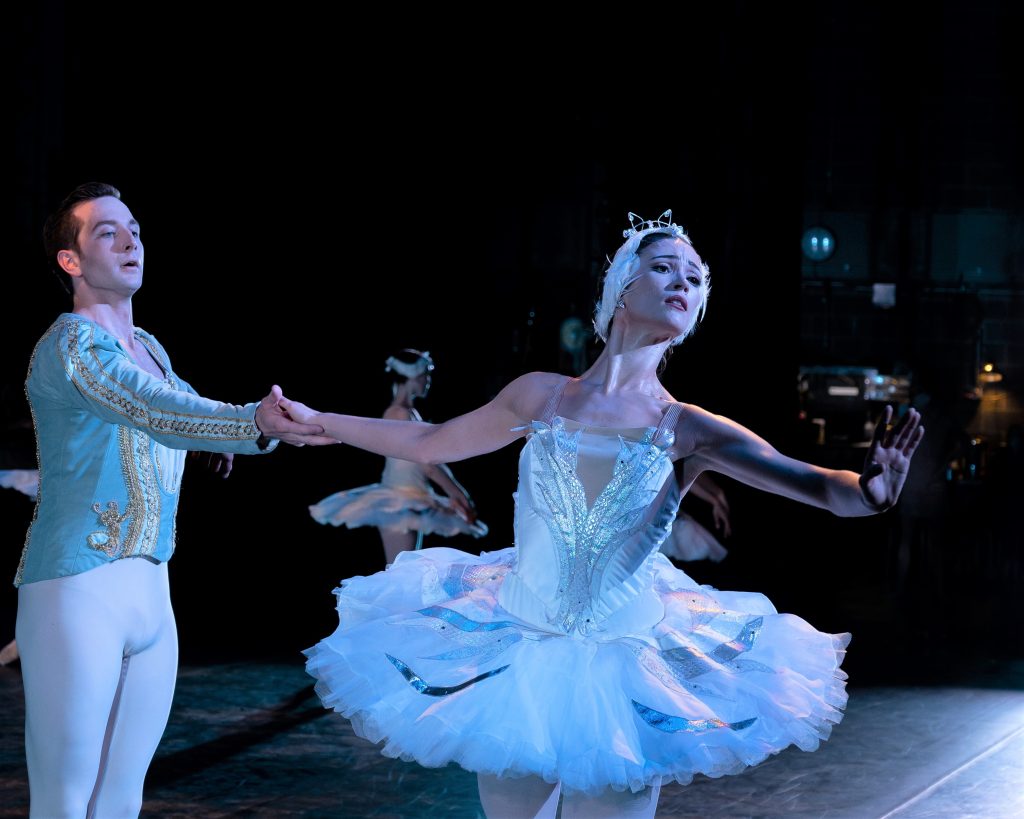 In the world of ballet, Swan Lake is second in popularity only to the perennial holiday favorite, The Nutcracker. Swan Lake is similar to other classic stories like Romeo and Juliet that have star-crossed lovers. In Swan Lake it is Prince Siegfried and the Princess Odette. Pittsburgh Ballet Theatre is premiering a new version of Swan Lake, onstage through May 15 at the Benedum Center

Swan Lake is not just a story of romance and good versus evil; it is also a story of continued product improvement. i debuted the production in 1877 with the Bolshoi Ballet and choreography by Julius Wenzel Reisinger. The exact sources of his inspiration are unknown, but he (and the unknown author of the original libretto) may have been influenced by Russian and German mythological tales of people turning into swans. In 1871 Tchaikovsky had written, directed, and choreographed a little ballet called The Lake of the Swans for his nieces and nephews while spending the summer with them and his sister. Some of the music from that summer production remains in Swan Lake to this day.

Tchaikovsky’s ballet did moderately well, but was no blockbuster and fell out of popular repertoire several years after. Audiences, critics, and dancers thought the music was too complex and orchestral and the choreography was lacking. There were several other stagings of Swan Lake by others between 1879 – 1894 with both existing and new choreography.

Master choreographers Marius Petipa and Lev Ivanov were in talks with Tchaikovsky about reviving the show with new elements before the composer’s death in 1893. Petipa and Ivanov, with assistance from some of Tchaikovsky’s associates and others, premiered the revamped and expanded ballet in 1895 at the Mariinsky Ballet in Saint Petersburg. It was a big success and has been staged by ballet companies around the globe.

Pittsburgh Ballet Theatre, under the direction of Artistic Director Susan Jaffe (who just announced she is accepting the position of Artistic Director at American Ballet Theatre in November) has also adapted Swan Lake by tinkering somewhat with the ending and other bits of choreography. Jaffe said in a pre-opening press release, “There are many endings to Swan Lake—mine is one of tragedy and redemption all at the same time, because life is a dichotomy.” Jaffee is somewhat an expert on Swan Lake, having danced for American Ballet Theatre and having first performed the dual role of Odette/Odile at the age of 19. Jaffe danced that role for every year of her 22-year career. She also has performed Odette/Odile opposite the legendary ballet dancer Mikhail Baryshnikov as Prince Siegfried.

In Swan Lake Prince Siegfried is being pressured by his mother the queen to find a wife. One day he is out hunting with his crossbow near dusk and sees a white swan turn into a beautiful woman, Odette. The evil sorcerer Baron Von Rothbart had cast a spell on this lovely maiden from a respectable family, turning her into a swan. Each night she returns to human form and only true love can break the spell. If the love proves false she will die. She will also die if the sorcerer is killed before the spell is broken. 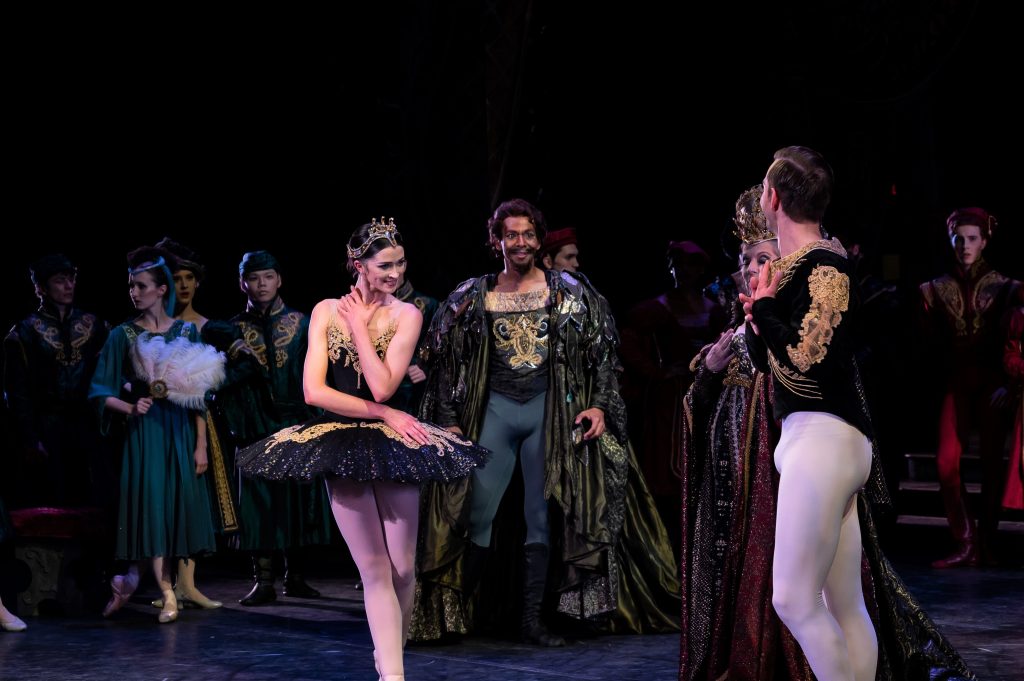 At a party at the palace, six princesses are presented to Prince Siegfried as possible brides. One especially catches his eye. It is the enchanting woman he met while hunting at night—or is it?  She is actually the sorcerer’s daughter, the black swan Odile, whom Von Rothbart has transformed into the likeness of Odette. The Prince chooses to marry Odile, until he finds out that he has been deceived. He then furiously tries to find a way to have his true love, Odette.

I attended the opening night performance at the Benedum and it was a wonderful ballet experience. Swan Lake is a long and technically difficult ballet, with many different classical techniques used. Over two weeks and six performances Diana Yohe and JoAnna Schmidt dance the role of Princess Odette in human form during the prologue, and the dancers portraying the Swan Queen are Hannah Carter, Alexandra Kochis, Marisa Grywalski and Jessica McCann. After Swan Lake, Kochis will take her final bow with the company after 27 years as a ballet dancer, and 16 with Pittsburgh Ballet. Prince Siegfried is performed by Lucius Kirst, Colin McCaslin, William Moore, and Yoshiaki Nakano.

On opening night Odette was danced by Schmidt and Carter, with Carter dancing the dual role of Odette/Odile in Act III. Yoshiaki Nakano danced the role of Prince Siegfried in all acts.

Nakano, with Schmidt and Carter performing the roles of Odette and Odile, were a sight to behold! Dancing together, solo, or with others, they were an elegant beauty. Through leaps, lifts, and romantic dances their movements were fluid and exciting. Schmidt and Carter’s Odette’s en pointe staccato step dancing and port de bras (arm movements) mimicking a swan’s wing movements were enthralling to watch.

The dancers also excelled in the Arabesque movements, even hopping backwards during a dance piece on the one supporting leg. And as Odile in Act III at the palace, it was thrilling to see Carter dance the Black Swan pas de deux with Nakano, performing the famous 32 fouetté turns brilliantly. Nakano turned in a smooth and athletic performance as Prince Siegfried both in his leaping dance runs and in more intimate dances with Schmidt and Carter.

A striking visual scene occurs when Siegfried is dancing with Odile. Appearing through a window at the back of the palace set is a vision of Odette dancing with furious anxiety at the sight of the two of them together. 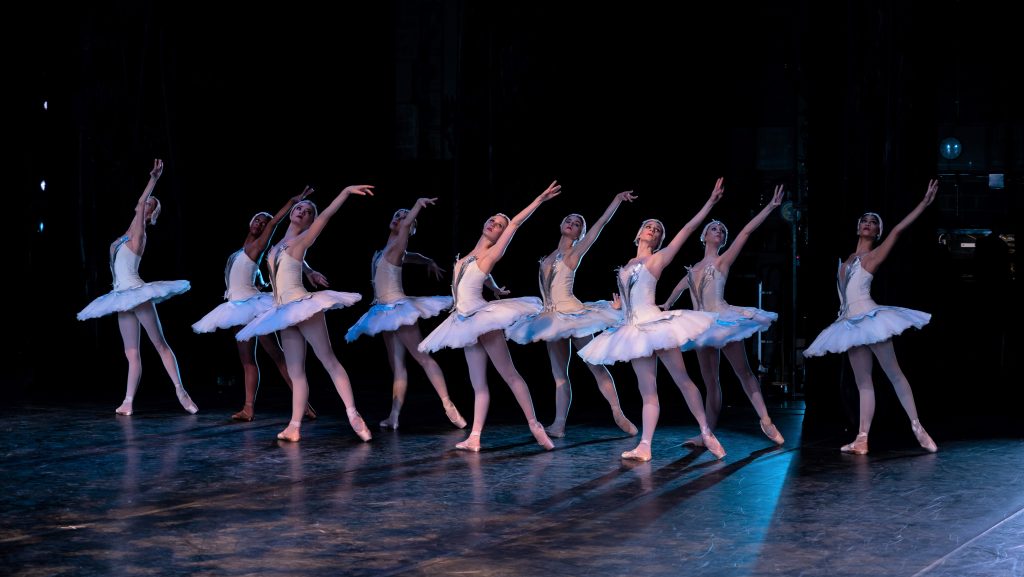 Everyone in the cast did a fine job. The corps de ballet excelled in all their dances especially the “Dances of the Swans” and “Dances of the Little Swans.” The precision and timing of the company in all dance scenes was very smooth, with dancers joining and leaving various groups. Another notable dancer was Kirst as the mean and green Von Rothbart.

Acts II and IV contained the wonderful swan dance scenes. Also visually interesting was Act III with the ball at the palace. There was a variety of richly colored and tailored costumes representing entourages from various countries. With several different ethnic traditions represented in their dances, it was somewhat reminiscent of a folk festival. One of the groups were Spanish dancers. The men were dressed similar to toreadors and the women danced with fans.

The audience seemed to enjoy all aspects of Pittsburgh Ballet Theatre’s performance of Swan Lake, rewarding the dancers with strong applause after every dance scene and a long round of sustained applause at the show’s conclusion. The performance was breathtakingly beautiful. 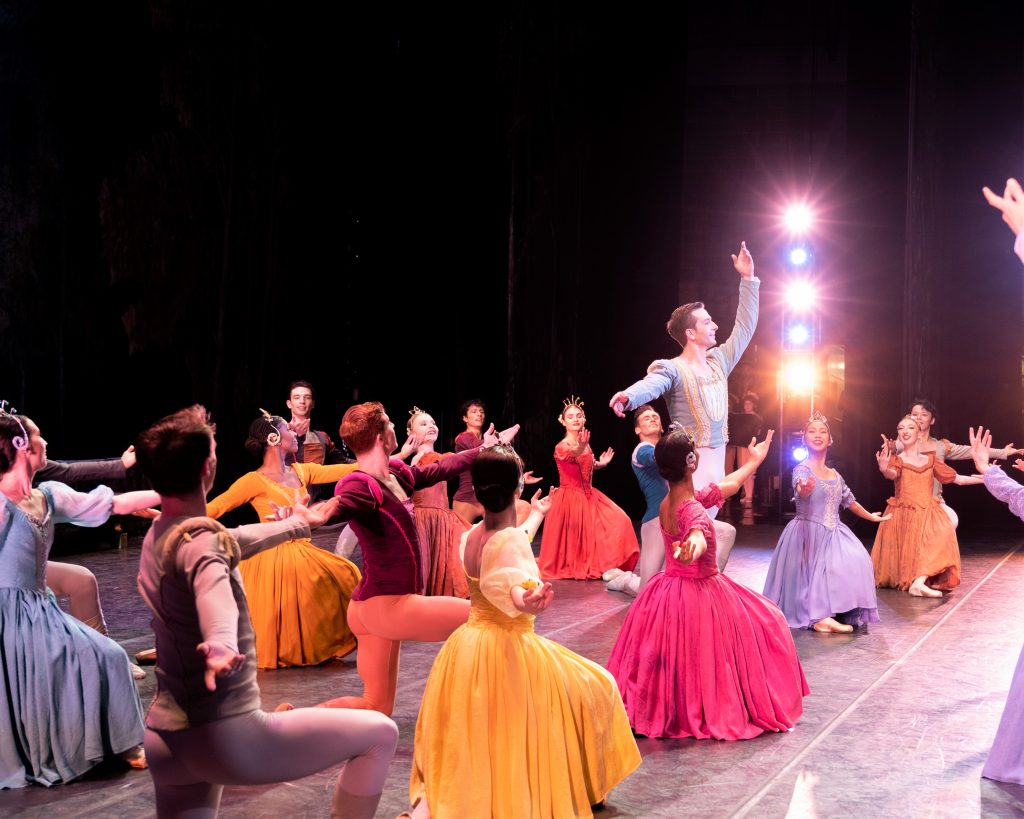 The court in colorful costumes dances with Prince Siegfried.

Big Orchestra in the Pit

In Swan Lake there are no spoken words so the emphasis is on the dancing and the music. The orchestra pit at the Benedum was opened to a wide aperture. And it’s no wonder, with the almost 50-member Pittsburgh Ballet Theatre Orchestra performing the score. Music Director and Principal Conductor Charles Barker had the talented group sounding sharp and precise. The dancing and music was synchronized wonderfully and the orchestra received several enthusiastic rounds of applause. There was another rhythmic musical sound to be heard and it didn’t come from the orchestra. It was created by the soft tapping of the ballet shoes on the dance surface throughout the night.