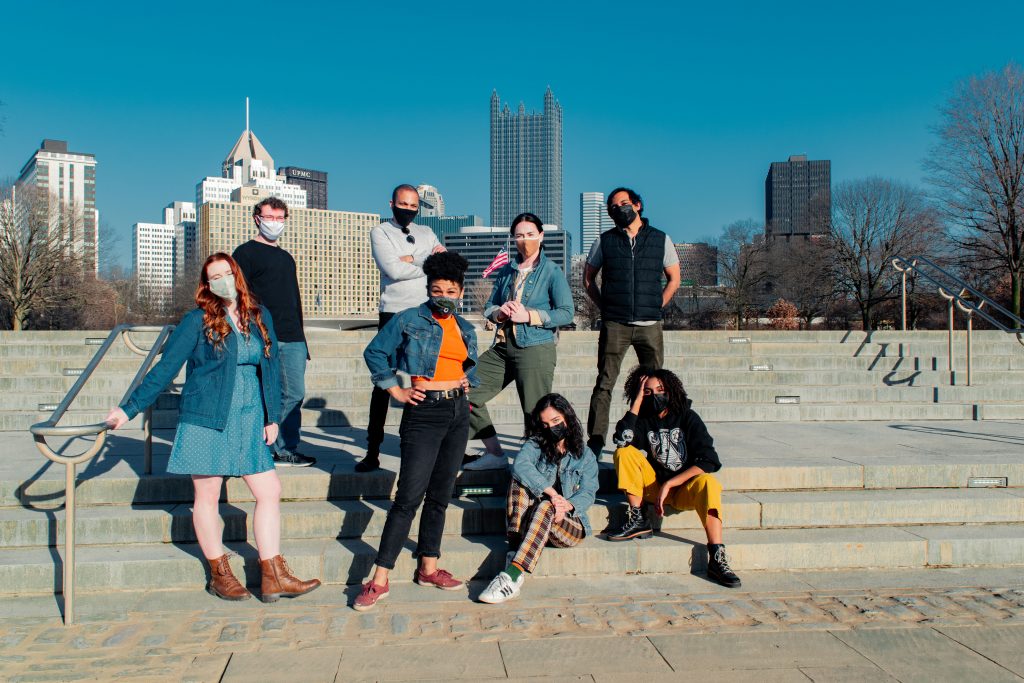 Members of the ’10 for 21′ cast at Point State Park, the starting location of the Downtown theater walk. (photo: Sarah Schreck)

Difficult times can often spur great works of art and entertainment. Such was the case in the 1300s when the plague was ravaging Europe and Giovanni Boccaccio wrote The Decameron. It’s a fictional tale about 10 young people who shelter in place at a villa outside Florence, and the stories they tell.

Quantum Theatre during this time of difficulty has adapted The Decameron with 10 real Pittsburgh actors. 10 for 21 is the updated title for Quantum’s production. The stories told by the actors have been captured via audio recordings and are suggested to be listened to with paired walks in Frick Park and Downtown Pittsburgh.

“Consider this Quantum’s gift to our zoomed-out community,” said Quantum founding Artistic Director Karla Boos. “It’s spring, put your tennis shoes on, and be inspired by the longing and energy of 10 young actors—seven women and three men, as Boccaccio chose to comprise his imaginary group. These 10 are real and helping life to emerge from a long, cold winter.”

Each of the two walking routes has designated stops at natural and manmade landmarks that one can enjoy while listening to the accompanying stories. There are five stories each for both the Frick Park and Downtown routes. The Frick Park walk is rural, following a mapped course that starts at the lower Frick parking lot below Regent Square, following Tranquil Trail, skirting Homewood Cemetery, and the Lawn Bowling Greens. It is a 2.8 mile loop.

The more urban Downtown Pittsburgh route starts at the Point State Park fountain, continuing to Katz Plaza, Market Square, and Mellon Square Park, and ends in historic Trinity Cathedral’s graveyard. It offers opportunities to sit and experience the sights and sounds of the city in addition to the recorded stories. You could also pair each hike with participating local eateries near each route. When you mention that you are a friend of Quantum the establishment donates a dollar-for-dollar match of gift certificates or meals distributed to people in need. If you’re not much into the walking portion of the experience, simply listen to the stories from your own favorite place or in the comfort of your home.

“After the success of OK Odysseus in Schenley Park last fall, we knew that we wanted to offer another piece of public art for Pittsburghers to enjoy along with the emergence of spring and blossoming hope for the end of the pandemic,” said Quantum Executive Director Stewart Urist. “You may choose to walk the whole 90 minutes it roughly takes to hear 5 stories; you can stop at any time and listen to them sitting still, or listen at home and take the walk in your mind as our ‘pod’ of young actors describe their surroundings a bit as they go.”

The 10 for 21 theatrical experience is free and more details can be found at the Quantum Theatre website.