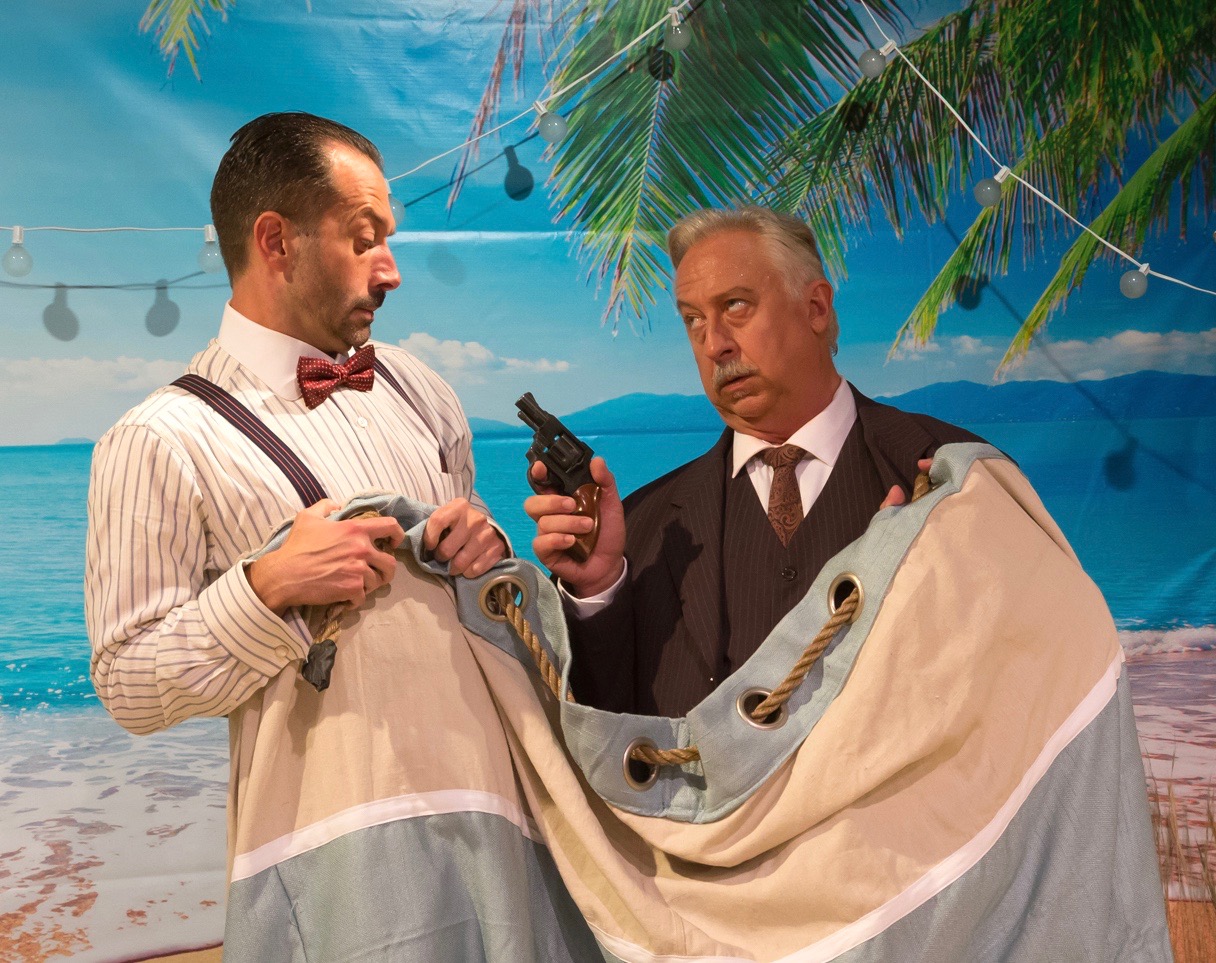 To live outside the law you must be dishonest. Scapino (Jeffrey Binder, L) is slippery but Don Jerry Geronte (Wesley Mann) catches him off guard.

Some theater fans expect a play to deliver a message, and the message of Scapino is that logic is overrated. Logic is for small minds and suckers. It’s for nitpickers who ask pointless questions like “What was Molière’s first name?” when the point is that he didn’t have any. Molière was a made-up, one-word stage name, like Lorde or The Edge, which appears to be two words until you put it in Russian, which does not use articles, and then it’s one word: Edge!

Scapino, at Kinetic Theatre through July 28, goes over The Edge and over the top. Although nobody actually knows where the top is, a certain style of comedy has been going over it for centuries. Scapino is a modern remake of Molière’s 1671 play Les Fourberies de Scapin, which in turn was inspired by the old Italian form of comical theater, commedia dell’arte.

But most Americans don’t care about history, according to recent polls. They want to know what’s in it for them. In that case, Scapino might be an ideal comedy for summertime or even February, when you really want to get away from whatever confines you. It is escapist in the same general sense that action movies are escapist. The billowing orange fireballs in action movies feel liberating because they speak to our oft-repressed urge to blow everything up. (Or blow up everything, for those afraid to end a sentence with a preposition.)

Similarly, Scapino is filled with characters blowing their lids off, in all sorts of ways—sexually, defiantly, strangely, and in the spirits of both fight and flight. This too can feel liberating: Hey, why not let it all out? The humor derives from the fact that it is funnier to watch fictional persons being asses than to be the ass. And there you have a logical explanation of the illogical nature of the play, except for the following.

The Art of the Con, the Danger of the Don

The title character, Tony Scapino, is a con man. As he declares in the Groucho Marxist manifesto spoken early in the play: “I could cheat a nun out of her habit if I had a mind to do it. Half a mind! I am a wily wolf among sheep … My mind is a labyrinth of lies … I am an artist, a colossus of chicanery, the Galileo of guile … I’m a lawyer.”

Scapino is no longer allowed in court, having been disbarred, which frees him to tamper directly in human affairs. He manipulates people by seeming to appeal to logic and reason, whereas what he’s really doing is spinning nonsense that feeds the emotions sweeping away their ability to think straight. Got that? Seen it done? Thought so. But Scapino has a saving grace. He’s a good-natured con artist, and in the play he’s out to do a good deed—helping a couple of young couples who are insanely in love against the wishes of powerful parents.

The plot was a standard one in commedia dell’arte. It has been killing ‘em since the days when the Inquisition was killing ‘em literally. The only trouble is, in our modern society, parental authority doesn’t carry the clout it used to, which takes the spicy peril out the plot. So to restore the punch, playwright Jeffrey Binder moves the story to present-day Florida and makes the dads two rival Mafia dons. They have agreed to broker peace between their warring crime families by marrying one capo’s son to the other’s daughter.

But now the kids, who could not keep their brains in their pants, are screwing up the peace plan by coupling with unapproved partners. The dons are chafed, and Scapino must somehow trick them out of their intended vengeance without being caught in its whirring knives. 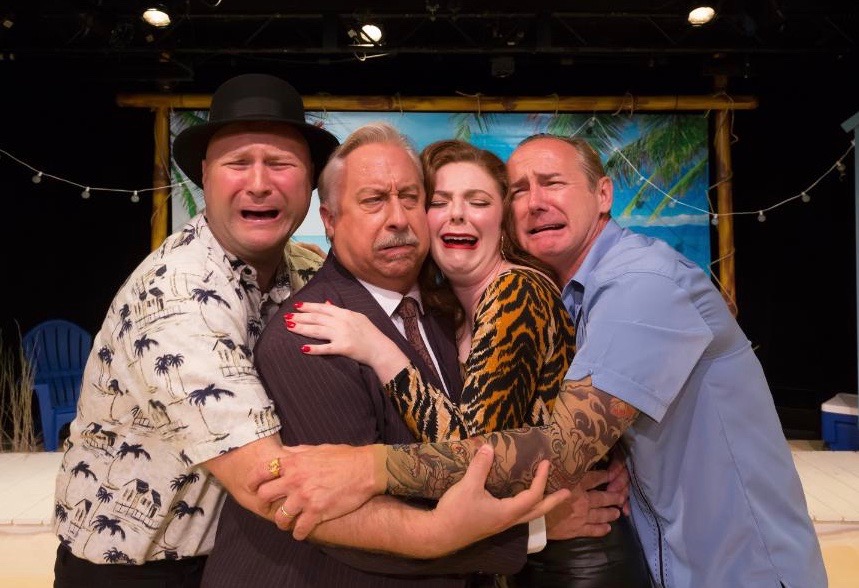 Much madness and mayhem ensue. Perhaps in watching old TV you’ve seen The Three Stooges. A good bit of equivalent whacking and wackiness is packed into Scapino. It’s artier, because the actors are pretty darn arty, and it’s also more over The Edge when played live instead of on the screen.

When a character bangs another’s head against the top of a steel barrel, the bonging resonates wonderfully. When a guy is thrust face-down into a plastic wading pool full of water, the frantic burbling is like the bluebird of unhappiness. And when Don Albert threatens to bore a hole in someone, the cordless electric drill that he wields while zooming the trigger for practice is a sign that maybe you shouldn’t bring the children.

There’s verbal humor, too. It ranges from malapropisms (“youth hostel” becomes “youth hostile”) to the deadpan use of obsolescent gangster slang: Fifty thousand dollars is “fifty large.” None of it may strike you as singularly hilarious, but the play is not written to rely on witty one-line zingers.

In Scapino, the chatter is sort of relentlessly round the bend. It takes effect mainly as a constant bad-a-bing-bing drumbeat to accompany the physical humor, which by the way is often more sublime than Stoogey. Allow me to close with two examples.

Actor Phillip Taratula, as Scapino’s feckless sidekick Sylvester, gets berated and beaten, yet he also gets his chances to shine. At one point Sylvester has to wear disguise and play-act a vicious police officer, in order to pull off a scam. Scapino urges him to channel his inner animal. The actor imaginatively summons up a menagerie of mean beasties. Then he sashays his bulky frame through the bad-cop role in a dance that’s a parody of police brutality while at the same time, you can tell he’s loving it. Curly would’ve nyuk-nyuked his approval.

Meanwhile, actor Sarah Silk is Feather, the girlfriend of one of the dons’ sons. The part is written as a fiery feminist Earth-mother-slash-flower-child, which presents a risk, because it’s an opportunity for memorable acting, but the dark pit of stereotype looms if you can’t inhabit the part to make it your own. Silk does the job not by acting outrageously, but by exuding a natural realism that sells the character.

In one scene she comes to the aid of a man who’s been badly battered with a baseball bat. He asks “Are you a doctor?” and Feather replies reassuringly, “No. Doctors are quacks and drug dealers. I’m a healer. I’m going to work on your aura.” She’s all business, like an alternative EMT. Producing an oblong crystal from her bag, she performs a businesslike healing dance around the injured man, strategically brandishing the crystal to capture bad juju and flicking the bad stuff away, as if flicking blood off a scalpel. It’s the flicking that seals the deal. You don’t have to believe in crystals to believe it’s working.

In short, Scapino is zany, a word borrowed from the Italian zanni for the tricksters in commedia dell’arte. The opening-night audience received the treatment with gusto. Whether it will help them be looser and goosier over the long term is a matter for scientific study. Seats are available during the rest of the run but it may be advisable to reserve quickly. 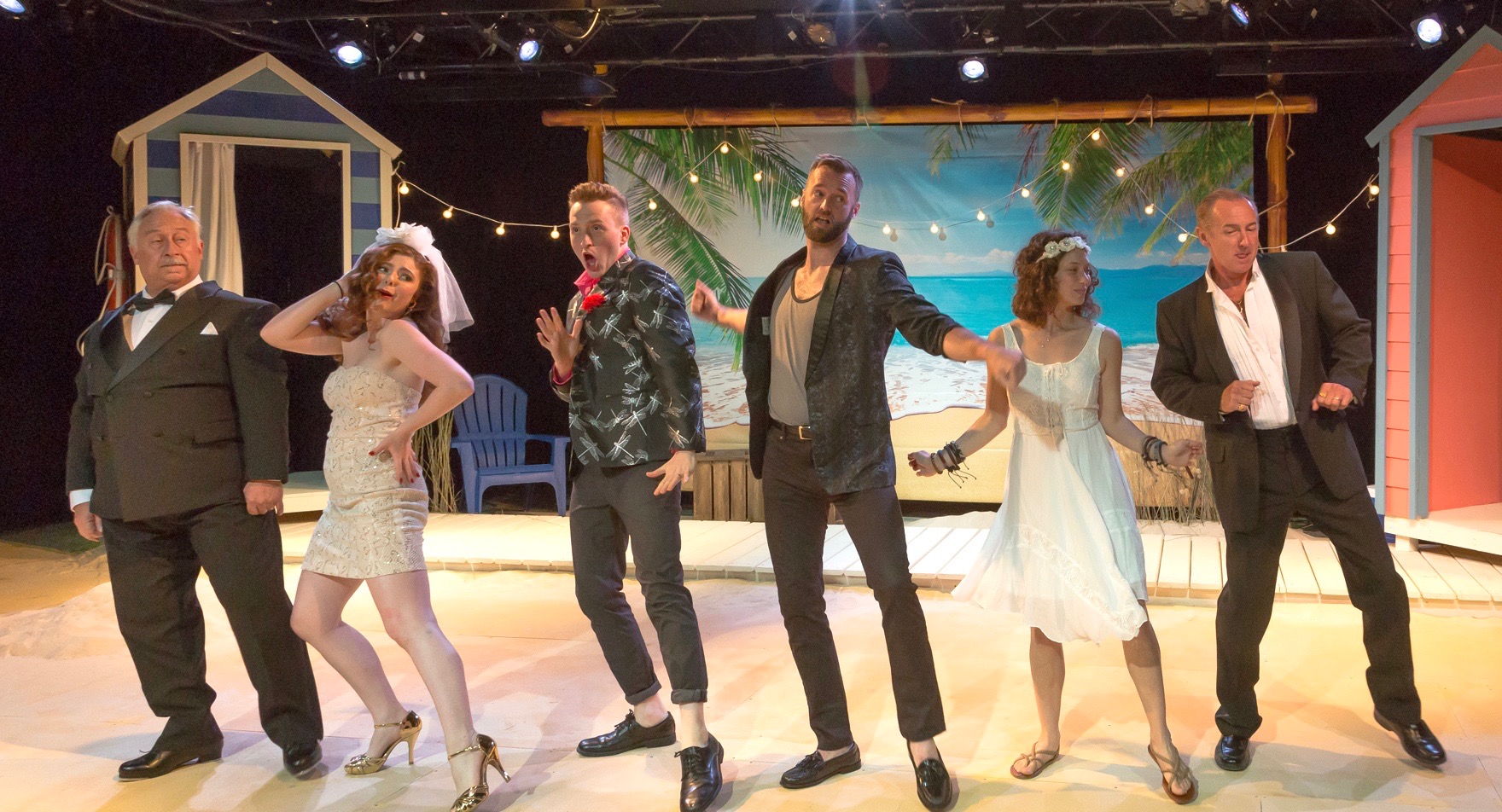 Not only did Florida-based playwright Jeffrey Binder write Scapino, he came north to Pittsburgh to play the title role. Wesley Mann and David Whalen, the dons, wonder if you’ve got a problem with that. Completing the fine cast, Sarah Silk and Phillip Taratula are joined by Jack Lafferty (who doubles as fight choreographer), Ethan Saks, and Morgan Snowden.

Scapino is directed for Kinetic Theatre by Andrew Paul, the company’s producing artistic director. Through July 28 in the Henry Heymann Theatre in the Stephen Foster Memorial, 4301 Forbes Ave., Oakland. For showtimes and tickets, visit Kinetic on the web or call 1-888-718-4253. A special deal is offered for patrons 25 and under.