Pittsburgh Public Theater recently announced its lineup of plays for the 2021-2022 season. The offerings are a interesting selection of plays both new and classic including works from August Wilson, Agatha Christie, Rob Zellers and Gene Collier.

First up is not a play, but rather a digital film version of the theatrical Slow Food by Wendy MacLeod. In the production, a couple celebrating their wedding anniversary after a stressful day of travel go to a Greek restaurant to celebrate. They are waited on by a highly neurotic waiter named Stephen who loves to overshare about his life. The Public aptly says, “A comedy for anyone who’s ever been hangry.” The film will be shot in a local Pittsburgh restaurant. October 5 – 17.

Pittsburgh loves its Steelers and has fond remembrances of the team’s founder Arthur J. Rooney, i.e. Art Rooney. Rob Zellers and Gene Collier wrote a one-man play about Rooney called The Chief, which premiered at The Public in 2003 and has had several revivals over the years. Rooney was previously portrayed masterfully by Tom Atkins. Now Zellers and Collier have created an all-new version of The Chief that will explore his early life, boxing career, and the peaks and valley of owning the Steelers. October 20 to November 7. 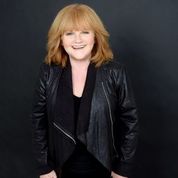 For its third production of the season, Pittsburgh Public Theatre presents the touring musical How the Hell Did I Get Here?, with book and songs by Lesley Nicol and Mark Mueller. It is a one-woman show about the life of award-winning actor Lesley Nicol. In the musical Nicol will detail her remarkable life in her own, words, photos, and songs: how she overcame her demons, found love, and achieved success on the stage and screen. Nicol is perhaps best known for her role as the cook, Mrs. Patmore, on the blockbuster TV series “Downton Abbey.” January 26 to February 13, 2022.

The much beloved Agatha Christie mystery, Murder on the Orient Express, adapted by Ken Ludwig, will be on track at The Public April 13 to May 1, 2022. When the luxurious cross-continent train is stopped due to a snowstorm a murdered businessman’s body is discovered. But there is a world-class detective on the train, Hercule Poirot, who is on the case. Could the murderer be one of the high-class passengers or someone on the service staff? Ludwig’s adaptation also includes some comic touches.

For the season finale, it’s a playwright whom Pittsburgh Public Theater has long supported and had a relationship with—Pittsburgh native August Wilson. His Two Trains Running will be on the boards from June 1 -19. The play, one of Wilson’s 10-part Pittsburgh Cycle of plays, is set in Pittsburgh in 1969. Racial tensions and civil rights weigh heavily on the characters in the story. The main character is a Memphis, a Hill District restaurateur, who has much to consider as the city wants to raze large tracts of the Hill, including his restaurant’s location, for urban renewal projects. Memphis and his customers turn to a variety of sources to maintain their sense of order and dignity including the mystical 349-year-old Aunt Ester. Wilson’s plays are known for their rich, authentic dialog. He was a great listener and would jot down notes when out in public places listening to people converse.

This season’s lineup truly has something for all theater tastes. For more information see the Pittsburgh Public Theater website.