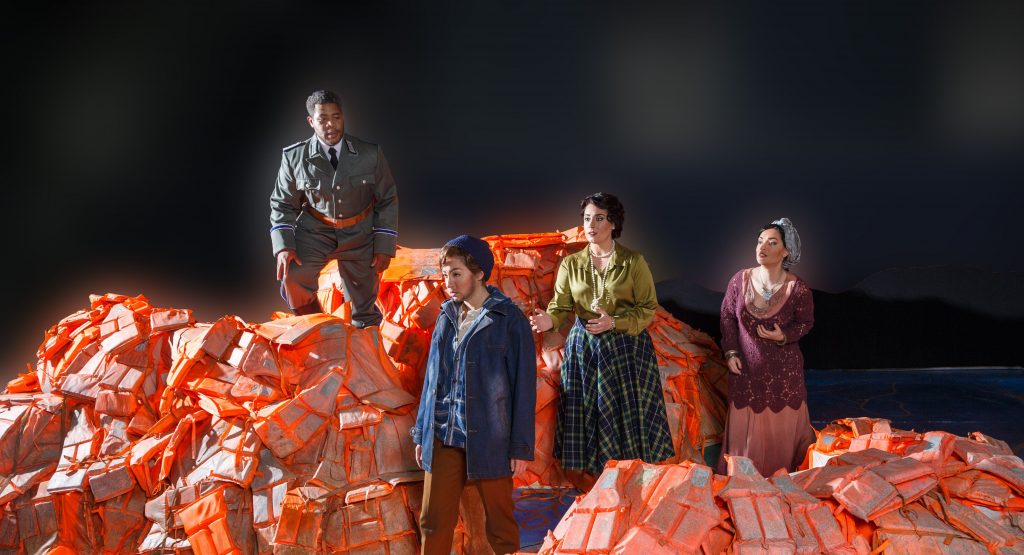 1) Pittsburgh Opera premieres a streamlined version of an old epic with AfterWARds — Mozart’s Idomeneo Reimagined. First staged in 1781, Idomeneo was a major success for Mozart, richly displaying his musical brilliance. But it has become a problem child in the opera world. The libretto (by Giambattista Varesco) is long and clunky, and even with cuts that Mozart himself made, a full production can run about four hours. So Brooklyn-based opera director David Paul has done a “director’s cut” that hones the rambling saga down to an 80-minute psychodrama. Paul’s AfterWARds focuses on the passions and conflicts among the story’s four key characters, keeping all of Mozart’s music for the portions used.

The situation: Idomeneo, king of Crete, returns victorious from the bloody Trojan War—only to find, unhappily, that his son has rescued and loves a Trojan princess. Ominously nearby is Electra, the star-crossed woman of Greek mythology, who wants the young man for her own. Performing AfterWARds for Pittsburgh Opera are tenor Terrence Chin-Loy, mezzo-soprano Antonia Botti-Lodovico (in a trousers role as Idamante, the king’s son), and sopranos Ashley Fabian and Caitlin Gotimer. In Italian with English supertitles at the CAPA Theater. 2 p.m. Pre-opera talk at 1 p.m. Last day. 111 9th St., Cultural District. (MV)

2) In a world premiere at Pittsburgh Playhouse, Ernest Hemingway’s The Old Man and the Sea becomes a theater production that you might call “The Old Man and the Play.” Writer A.E. Hotchner, a friend of the late Hemingway and now 101, took charge of adapting the novella for the stage. (Hotchner’s son Tim, also a writer, assisted.) The play hews closely to Hemingway’s spare but symbol-laden plot. An old Cuban fisherman, scorned by neighbors for losing his mojo, goes out to sea to prove them wrong. He battles and reels in a huge marlin. Then, with the prize lashed aside his small boat, he must battle the sharks that come swarming for their shares. The play uses multimedia to help simulate the action. It also marks a new mode of collaboration, as Point Park University, owner of the Playhouse, teamed with RWS Entertainment of New York to produce it. More professional productions with other partners are planned. Anthony Crivello plays the fisherman in The Old Man and the Sea, and Playhouse Artistic Director Ronald Allan-Lindblom directs. In the Highmark Theatre at Pittsburgh Playhouse. 2 p.m. Performances continue through February 17. 350 Forbes Ave., Downtown.(MV)