1) George Clinton has been on a musical journey of exploration for many years. He started out in a doo-wop group called The Parliaments, modeled after Frankie Lymon & the Teenagers, while working in a hair salon. Then he became a writer, arranger, and producer for Motown Records before working for other Detroit musical companies. As the leader of Parliament-Funkadelic, he was one of the top innovators of funk music, along with James Brown and Sly Stone. Combining music like that of Brown, Stone, Cream, Jimi Hendrix, and others with different sounds and lyrical arrangements and a big dose of funky bass and drums, Clinton came up with an outline for his sound. This led to massive success for him in the ’70s with “Give Up the Funk (Tear the Roof Off the Sucker)” and “Flash Light,” among others.

It would also be remiss if Clinton’s creativity with shows, lyrics, titles, and costumes was not mentioned. He even had a spaceship that he called his Mothership, which descended to the stage at concerts. Parliament-Funkadelic also had an album called The Clones of Dr. Funkenstein, which later spawned the Clinton-produced female funk group, The Brides of Funkenstein. His concerts are fun events. Clinton has been primarily a solo artist since the ’80s but periodically collaborates with others. His latest release, 2015’s P-Funk Live at Metropolis, is remarkably his sixth live album. Clinton and Parliament-Funkadelic are 1997 inductees into the Rock and Roll Hall of Fame. 8 p.m. Jergel’s Rhythm Grille, 285 Northgate Dr., Warrendale. (RH) 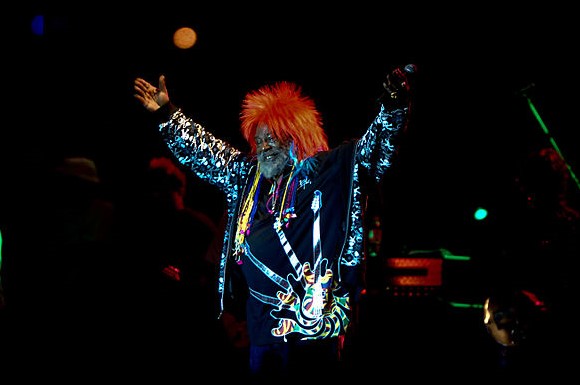