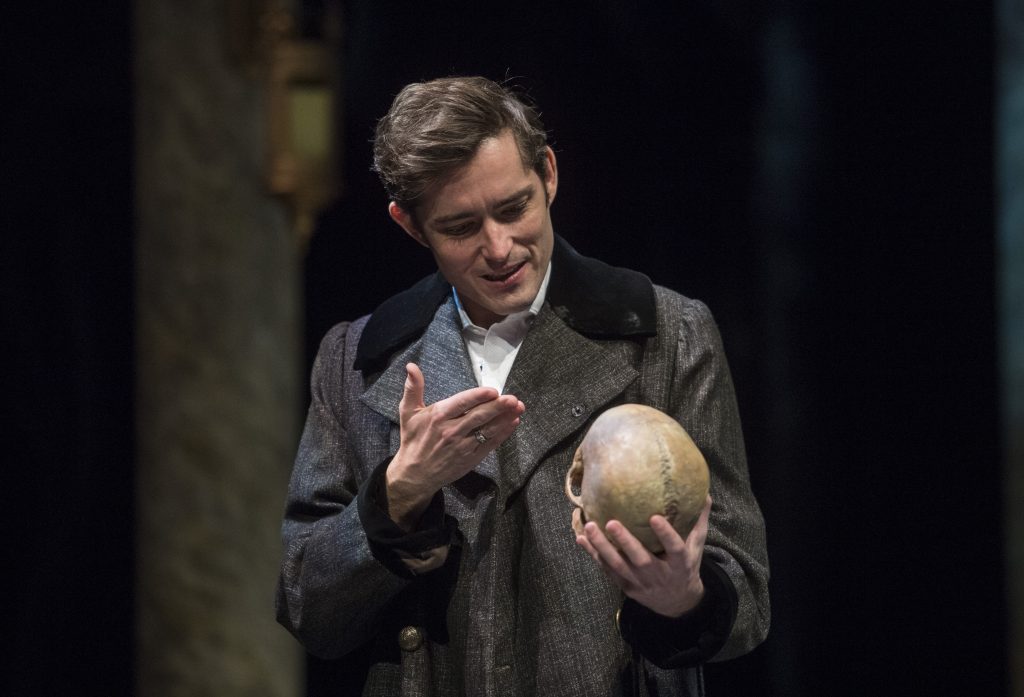 Hamlet (Matthew Amendt) finds the skull of Yorick, the jester who amused him when he was a child. Photo: Michael Henninger.

1) It’s a good thing William Shakespeare didn’t have to write Hamlet for a Hollywood studio. Imagine the complaints: Too philosophical! Script needs more sex, more fight scenes. And why is this Hamlet guy so inconsistent? He can’t make up his mind! Indeed, much of the play’s greatness lies in its ambiguity. Prince Hamlet comes across to us, down through the ages, because he knows too much and yet too little: Yes, life is complex and crazy, but what should we do about it? Hamlet is furthermore Shakespeare at his most eloquent. The play has been analyzed by Sigmund Freud, quoted by Mary Baker Eddy in her textbook on Christian Science, and invoked by the economist Joseph Schumpeter to help explain his theory of creative destruction. Famous actors who’ve played the title role range from Edwin Booth, brother of Lincoln’s assassin, to Ethan Hawke—who delivered the “To be or not to be” soliloquy while roaming the aisles of a Blockbuster video store, in the 2000 movie version set in New York City. And now…

Ted Pappas, retiring from his longtime post as head of Pittsburgh Public Theater, directs a production of Hamlet to close The Public’s season. Pappas will be back next season to direct Lucas Hnath’s A Doll’s House Part 2. 8 p.m. Continues through May 20. At the O’Reilly Theater, 621 Penn Ave., Cultural District. (MV)

2) There are many ways to celebrate Earth Day and pay tribute to our beautiful and delicate planet. One interesting manner is Pittsburgh Earth Week Ecolution Fashion Show, which is part of five days of events for Pittsburgh Earth Day 2018. The main event begins in the beautiful, airy lobby of the Fairmont Hotel at 7 p.m. and is curated by Richard Parsakian and styled by Izzazu Salon, Spa, & Serata. This year’s theme, Forces of Nature, is destined to give you a dazzling experience. Musical heat will be generated by the noted DJ Selecta and attendees will enjoy performances from the Texture Contemporary Ballet.and dance soloist Weylin Gomez. Artist and spoken word writer/performer Vanessa German will debut a new work. The main highlight of the evening, from 7 to 10 p.m., will be a runway fashion show. It will feature models sporting stylish clothing made from recycled and reused materials created especially for the event by talented local designers. Docherty Model and Talent Agency is supplying the runway models and jewelry designer Renee Piatt will be showcasing her creations. There is a VIP part of the evening, which begins at 6 p.m. and features complimentary cocktails and appetizers. VIP ticket holders will also get a reserved seat next to the runway for the fashion show. Fairmont Hotel, 510 Market St., Downtown.

3) No joke, Rick Astley is coming to Mr. Smalls Theatre. Astley is an English singer who is best known for “Never Gonna Give You Up.” The single reached number one in the UK, US, and 23 other countries in 1987. It appeared on his debut album, 1987’s Whenever You Need Somebody. It snagged the BPI (now BRIT) award for Best British Single in 1988. More singles and albums followed, but after a shift from dance-pop to adult contemporary, Astley retired from the music business at 27. He returned in 2001 with Keep It Turned On, but it wasn’t until 2007 that Astley found a new generation of fans thanks to rickrolling, the prank of tricking online users into clicking a link and having it redirect to the music video for “Never Gonna Give You Up.” The prank arguably reached its zenith when he pulled it at the Macy’s Day Parade in 2008 (at least the man has a sense of humor). His latest album is 2016’s 50. 8 p.m. 400 Lincoln Ave., Millvale. (CM)