Nobody compares to Freddie Mercury, but the new guy isn’t exactly chopped liver either. Maybe you caught Queen + Adam Lambert opening the Oscars show on TV this year. Now they’re performing live in Pittsburgh at PPG Paints Arena on their Rhapsody Tour. This current combination is a very British kind of marriage. The spouses, for instance, maintain separate residences: Queen at one website address in cyberspace, Adam Lambert at another. Lambert however is American (born in Indianapolis), and we should give thanks that he doesn’t try to be a Freddie impersonator. He brings his own voice and stage presence to collaborations with Queen, and it works. The mutual interest arose in 2009 when Queen lead guitarist Brian May saw a video of Lambert doing “Bohemian Rhapsody” as an audition for TV’s “American Idol.”  Later, in the series finale, Lambert and fellow contestant Kris Allen shared lead vocals on “We Are the Champions.” Allen won the “Idol” competition but Lambert went on to perform with Queen. Tickets for Queen + Adam Lambert in Pittsburgh are officially sold out, so check your secondary sources. 8 p.m. 1001 Fifth Ave., Uptown. (MV) 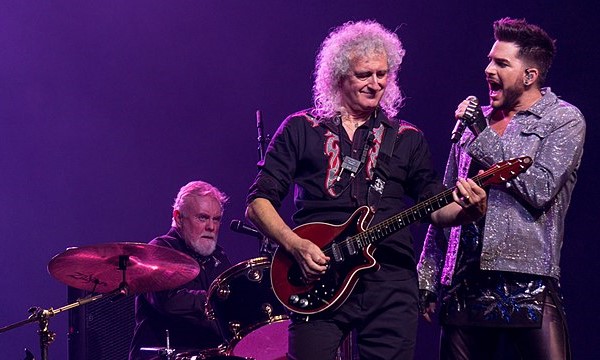 Queen and Adam Lambert in a 2017 Concert. (L. to r.) Roger Taylor, Brian May, and Lambert. (photo: Raph_PH and Wikipedia)

2) You’ll want to plan ahead for Pork & Beans. This Texas-inspired BBQ and smokehouse offers “a daily, rotating selection of house-smoked meats available by the pound on a first-come, first-serve basis.” These meats run the gamut of brisket and pork shoulders to salt-and-pepper chicken. It’s menu also includes daily specials, like meatloaf on Mondays and baby back ribs on Tuesdays. Luckily, the restaurant takes reservations. The menu also includes appetizers, wings, sides, sandwiches, but only two salads. (Definitely a place Ron Swanson would love.) Although the specials average $25, the sandwiches hover around $14. There’s also an impressive list of craft and imported beers on tap plus wine. This establishment additionally serves lunch 11:30 a.m. to 2 p.m. Tuesday to Saturday. Pork & Beans is part of the Richard DeShantz Restaurant Group, which owns other Cultural District eateries such as Butcher and the Rye and täko. Patrons can dine in, deliver, or plan a catered buffet for private events. 136 6th St., Cultural District. (CM)