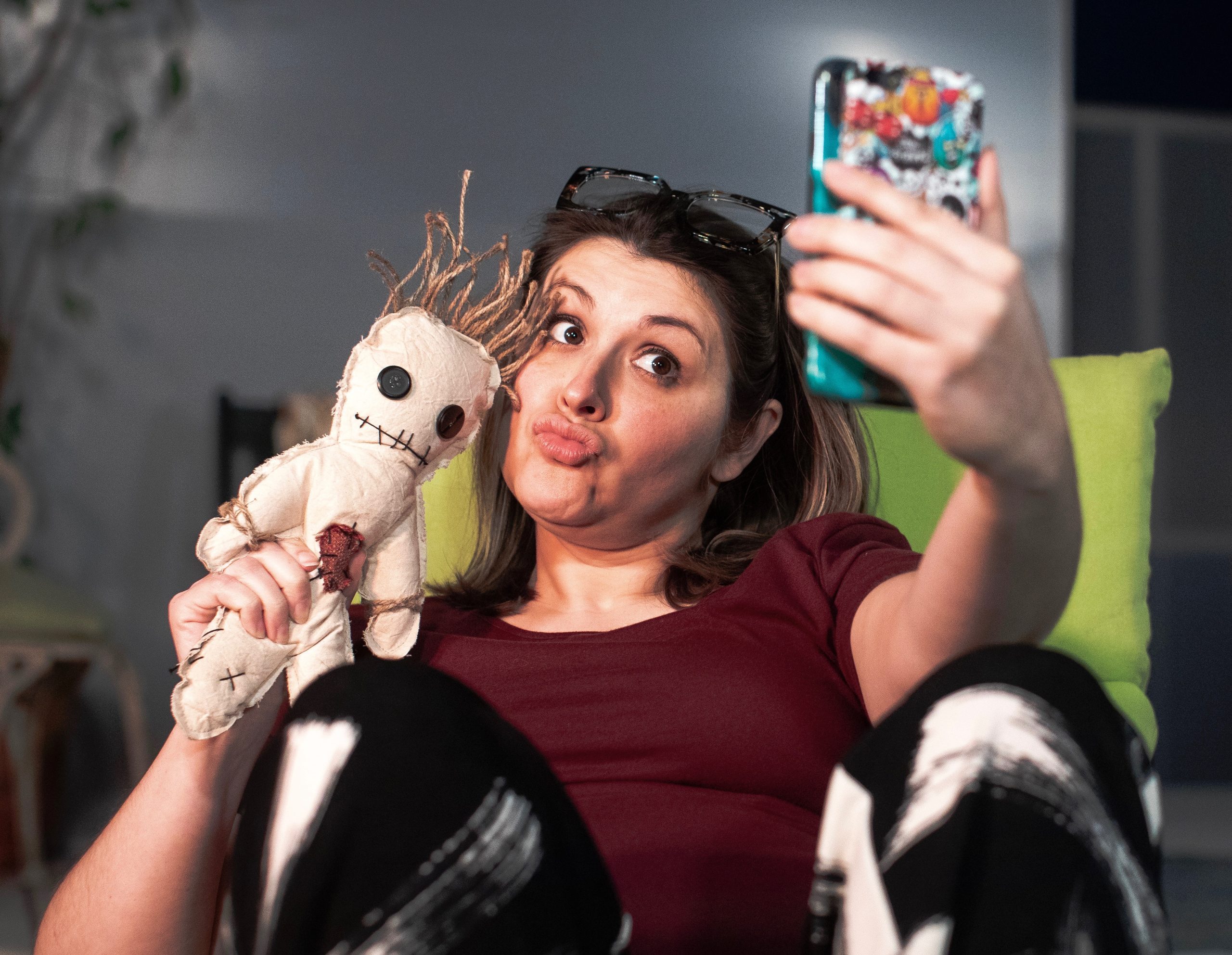 If you were Genevieve, you’d want a voodoo doll, too. Julianne Avolio acts the part with gusto in ‘Plano.’

Is it OK for a reviewer to recommend a play that he didn’t entirely understand? Because it moved him and amused him; because he is still thinking about it the day afterward? Plano (rhymes with “Drano”) by Will Arbery, at Quantum Theatre through April 24, is that kind of play. Tricky in structure, with lots of dots to connect, but high in impact even if you don’t catch ‘em all.

Asked to compare Plano to something you might have seen, I would call it Waiting for Godot meets True West—except with women as the main characters. A review of the 2019 premiere in New York referred to the play as Chekhov’s Three Sisters meeting David Lynch. And anyone versed in Sixties music might think of Plano as a response to Frank Zappa’s famous lyric: “Whooo could imagine that they would freak out in the suburbs?”

The real Plano, Texas is a suburban city near Dallas. Some Texans consider it the epitome of a nice place to live, while to others it’s an archetype of suburbia as a social wasteland, a place where the American Dream goes to die. Most action in Plano takes place close to Plano, not in it, although sometimes the characters go there, and one man or at least one of him gets stuck inside of Plano with the Drano blues again. I say at least one of him because there’s more than one of Steve. He seems capable of being where he is and also where he isn’t. Quantum pulls off the illusion by combining stage effects with some quick-change-of-clothing artistry by actor Tim McGeever.

But why would Steve want to be in one place while seeming to be in another? Well, he’s a wayward husband, and cheaters tend to practice creating that effect. It’s quite an annoyance to jilted wife Genevieve (played by Julianne Avolio), who feels his presence in the house even long after an official split has freed him to go off with the hussy who stole his so-called heart. Genevieve feels Steve’s presence to the point of actually seeing him, despite the fact that he’s not there, and that’s why she is screaming over the cell phone to ask him to please come and take himself away. So you see, magical realism makes sense if you only think about it. Or try not to.

Sisters, Lovers, Levels of Being

Plano revolves around three sisters. Genevieve, despite her propensity to scream, is the glue girl who holds the trio together well into their so-called adulthood. They’ve all been making weird choices when it comes to men. Anne (Lisa Velten Smith) is a college professor who resolves to marry Juan (Jerreme Rodriguez), a gorgeous guy she met at a food market. She does it in the face of Genevieve warning her that Juan could never be her intellectual soulmate and only wants to marry an American woman to get a green card and furthermore, he’s gay. All this may be true but Juan, despite lacking a PhD, is creative. When Anne says she feels that her family is cursed, Juan reveals that his family is likewise under an evil spell. Juan and his kin are cursed to have their feet grow smaller instead of staying right-sized. 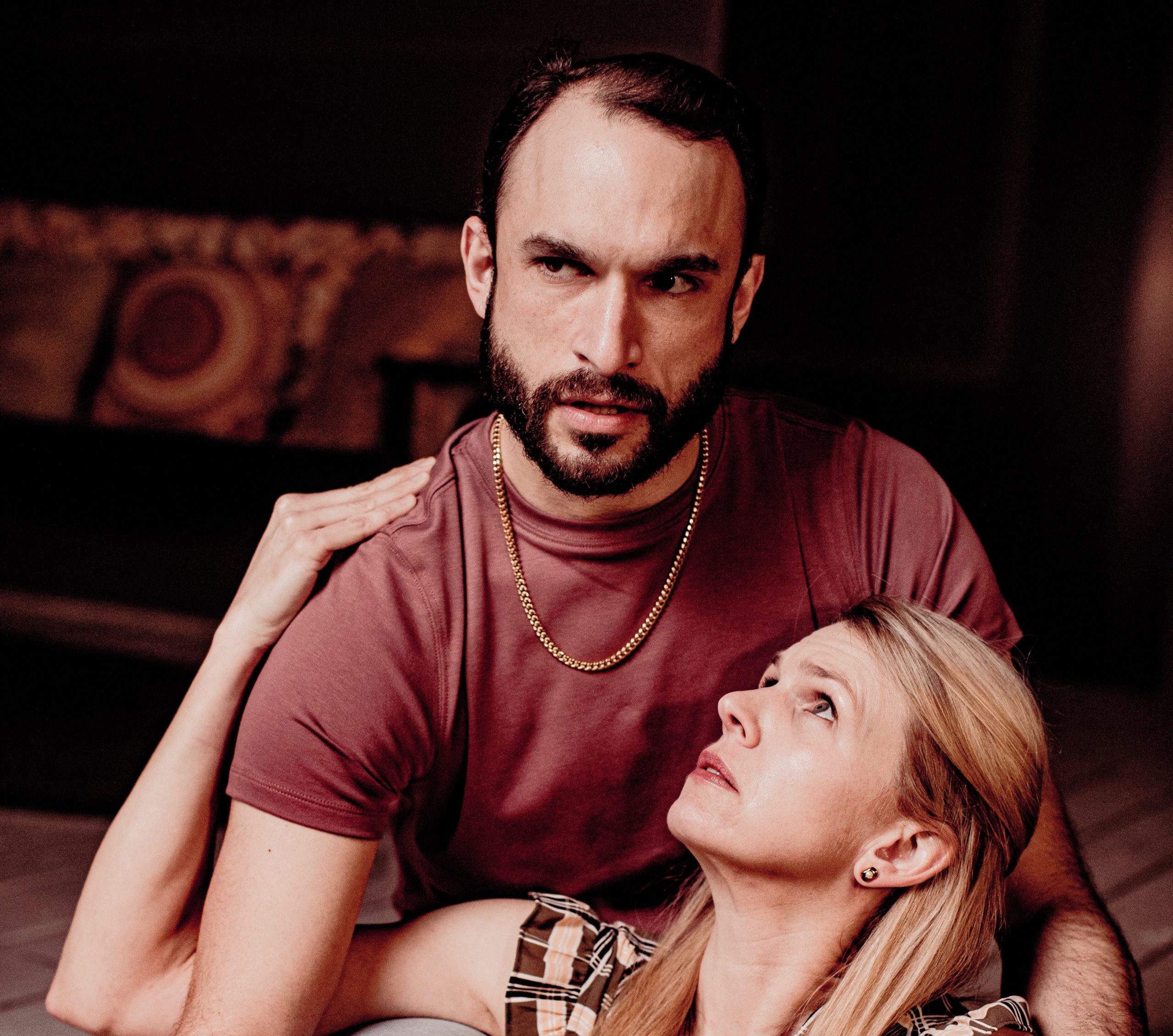 Anne (Lisa Velten Smith) has misgivings but Juan (Jerreme Rodriguez) promises to keep his tiny feet on the ground.

Moira Quigley plays spooky Isabel, the youngest sister and a devout Catholic dedicated to missionary work among the poor. The man in her life turns out to be the most elusive of the bunch. Isabel is courted by a Faceless Ghost (taylor knight, no capitals please), who might be God or at least that part of God who wants to sleep with her.

On one level it’s all a perfect setup for metaphysical slapstick. Seeing that Plano lists a fight director in the credits should tell you that some sticks indeed get slapped. My wife, who came with me to the play and normally isn’t combative, roared with delight at the wacky scene in which the sisters gang up for a group pummeling of one of the guys.

Plano, however, gets boosted onto this reviewer’s highly recommended list by the presence of levels other than absurdity. Beyond the curse of the shrinking feet (which may have a symbolic meaning that I haven’t figured out)—and embedded in the dizzy soliloquies (“The hearts of men are naked baby rats,” etc.), and throughout the constant time-shifting (more about that in a moment)—there is heartbreak. It’s not the kind of heartbreak you find in tragedies where characters die. Rather, it is the heartbreak of living a life gone bewilderingly out of joint. Maybe because you messed it up when you shouldn’t have. Or maybe just because destiny has defeated you no matter what.

Playwright Will Arbery, a native of the vicinity of Plano, grew up among seven sisters. That’s a mystical number and a big one. Perhaps it is what destined him to write a surreal dark comedy with women at the center.

As for the time-shifting: It happens frequently in Plano. Relax. The script signals you when it’s about to jump ahead. And don’t be too surprised when it jumps backward. There’s more than one of each of us and we live in the past and the present simultaneously.

To paraphrase the brand name found on certain cheese products, Plano is a heluva good™ play. Excellent concept, well presented by Quantum’s reliably top-notch staging and acting. One caveat: Although the experience of time is fungible, time itself is a non-renewable resource. Reserve promptly before Plano vanishes. 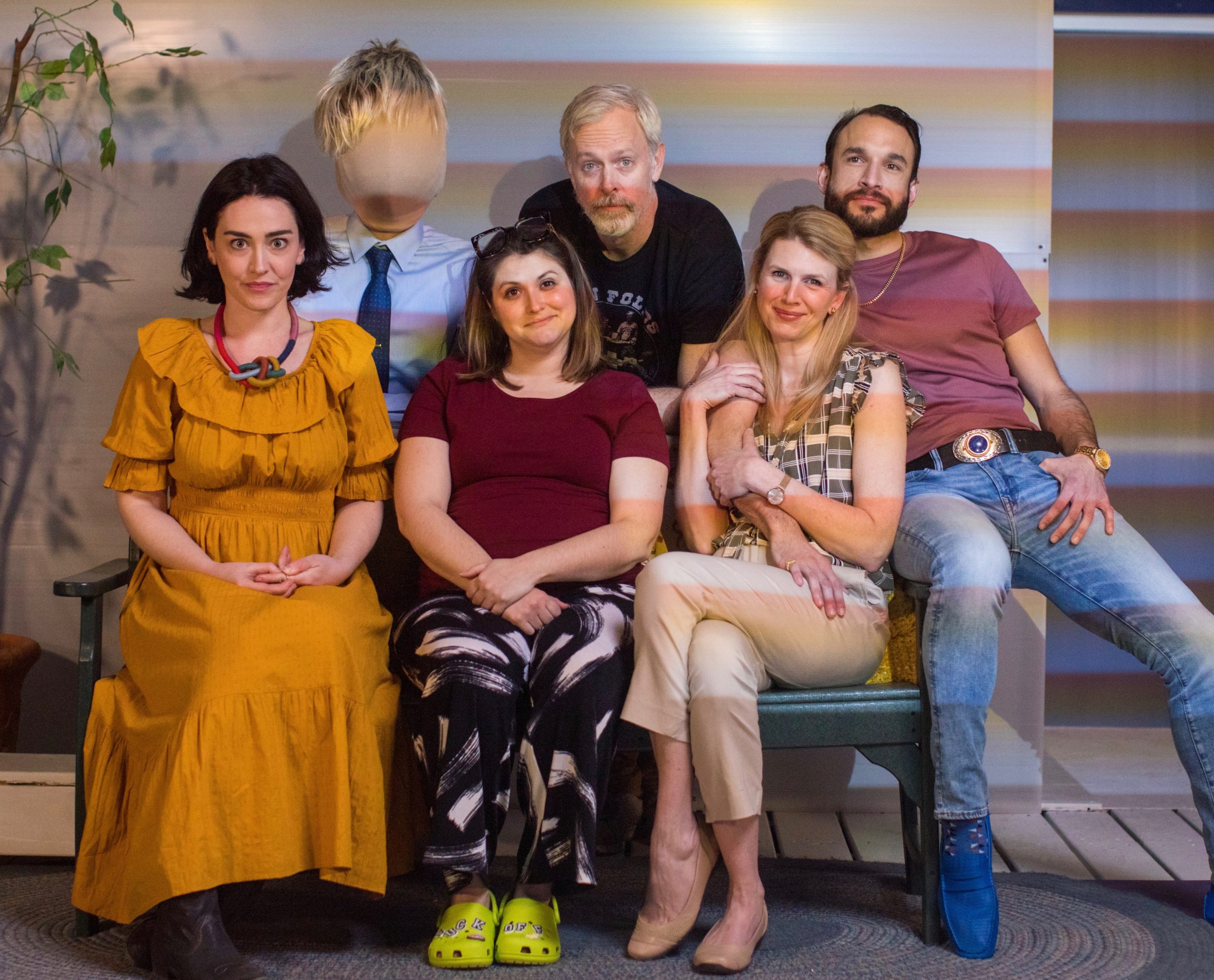 Mug shot time. Moira Quigley (L) is the weirdest sister with Julianne Avolio and Lisa Velten Smith as her sibs, while the men in their lives are taylor knight, Tim McGeever, and Jerreme Rodriguez.

Will Arbery’s Plano is directed for Quantum Theatre by Adil Mansoor. Through April 24 in a storefront space at Bakery Square, 192 Bakery Square Blvd., East Liberty. Visit Quantum’s website for tickets and detailed directions.

In addition to cast members named in the review, Cary Anne Spear has a memorable speaking role, and Jamie Agnello is the swing actor (ready when needed) as Genevieve. Scenic design is by Stephanie Mayer-Staley with assistance by Marissa Fisher, with lighting by Xotchil Musser, costumes by Rachel Vallozzi, sound by Aaron Langraf, and projections by Cat Wilson. Michelle Engleman is director of production, with Cubbie McCrory as technical director and—wait for it—Randy Kovitz as fight director. Last in typical credit lists but not in the hearts of the creative team is the stage manager. For Plano it’s Cory F. Goddard, assisted by Jess Levine.