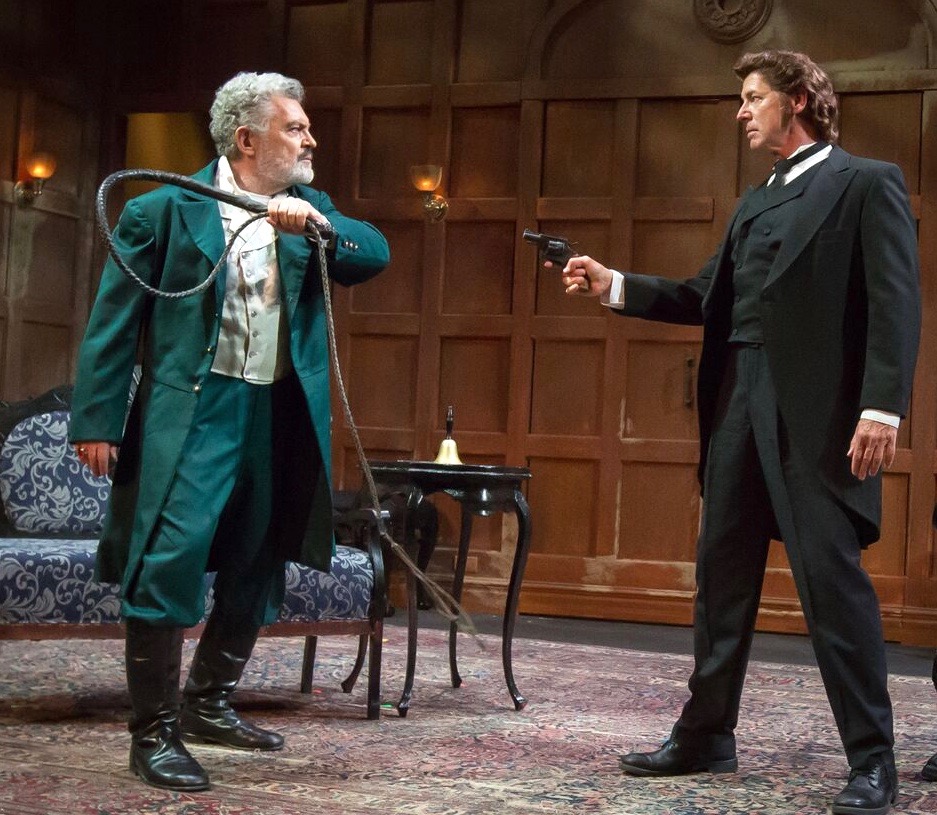 Rylott has the whip but Holmes has the drop, not to mention a drop-dead hairdo. (Which btw he’s wearing for disguise.) Sam Tsoutsouvas plays the whip-handler and David Whalen the detective.

If you follow the news, you’ve heard of the American Psychiatric Association’s “Goldwater Rule,” stating that psychiatrists should not offer opinions on the mental health of public figures. But I am no psychiatrist, so I’m free to say that a certain public figure is crazy. I can even guess a diagnosis: narcissistic personality disorder.

The unhinged bully is named Grimesby Rylott. He’s the villain in The Speckled Band, at Kinetic Theatre through June 30. This little-known play was the only Sherlock Holmes story adapted from print to the stage by Sir Arthur Conan Doyle himself. Although it has some cool Sherlock scenes, as one would expect, the play is propelled largely by the rest of the characters. Many are bizarre, eccentric types, brought to life vividly by Kinetic’s all-star cast. And nearly all are threatened by the greed and rage of Rylott, a minor aristocrat turned mad tyrant.

It’s feared the man has literally gotten away with murder. Holmes must try to stop him before he kills again. During the course of The Speckled Band, however, Rylott proves so despicable in so many ways—devious and manipulative one minute, over-the-top abusive the next—that I mainly found myself rooting for somebody to spank him, already. Despite my being a parent who does not believe in spanking.

For Sherlock Holmes fans, the play is a gotta-see. It is vintage Holmes, staged and performed by experts. (Director Andrew Paul directs Holmes plays across the country when he’s not busy running Kinetic Theatre.) And for those who need further reasons to attend: Read on.

The Backstory; the Villain’s Secret

In 1892, in England and elsewhere, Sherlock Holmes mania reached a level similar to what we’ve seen for the Harry Potter books or “Game of Thrones.” Tales of the detective’s cases were carried monthly by The Strand Magazine of London. Readers lined up in the streets to get the February issue, and they particularly loved that month’s story, “The Adventure of the Speckled Band.”

Arthur Conan Doyle approved. The little piece held a special spot in his own heart. Years later, while writing for theater, he spun it out in much greater detail as a play. The Speckled Band premiered in 1910, again scoring a hit. Tours and U.S. productions followed—until times changed, or other things changed, and the play nearly vanished from the public eye. Such are the mysteries of show biz.

Kinetic’s production is a rare revival. It opens with a coroner’s inquest at a country estate. Rylott (played by Sam Tsoutsouvas), the master of the house, makes his first appearance looking a wee bit anxious. We quickly learn why. Rylott is a widower. His wife had died a while ago, leaving him two stepdaughters, children of a previous union. And now one of the stepdaughters has died, too. Suddenly, from no apparent cause, under circumstances that arouse suspicion.

The young woman was engaged to marry. This meant she would take with her a share of the fortune left by her late mother. But since she cannot marry, because she no longer exists, the money stays home, with guess who. 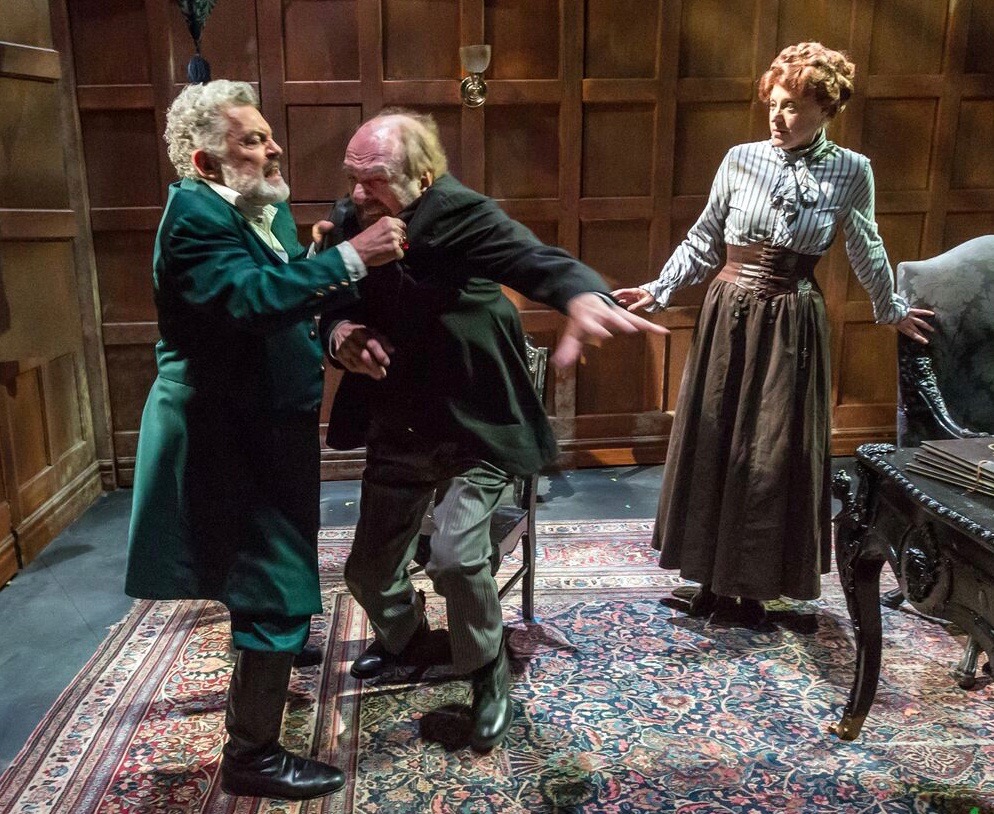 To help conduct the inquest, the coroner (Martin Giles) brings a jury of citizens from the nearby town. Among them is Armitage (Wali Jamal), who argues strenuously that Rylott must’ve killed the stepdaughter. Hasn’t everyone seen his fits of violent temper when he’s crossed? Yes, but it doesn’t prove homicide. Nor can a parade of witnesses shed light on what might have made the girl run shrieking from her bedroom late at night and collapse, never to rise.

Much of Act I is this tense courtroom drama. Then, after the inquest reaches no decision and the locals leave, Rylott cackles over what they missed. By intermission we know who did it and the instrument he used.

The Hitchcock Principle; the Monster Mash

It’s unusual to reveal the facts of a murder so early. The original “Speckled Band” story held back the facts till the end, when it described how Sherlock deduced them. For the stage play, I’m guessing Doyle chose a mid-course reveal to help set up the next act’s tension.

Rylott has a surviving stepdaughter, Enid (Jessie Wray Goodman).  Now she, like her dead sister, is engaged.  And we know—because we’ve seen the secret—the nature of the fate that’s stalking her.

Decades later, Alfred Hitchcock would elucidate this principle of suspense. Don’t surprise the audience with a bomb exploding, he said. Show them the bomb planted in the room and ticking. Then the audience will go deliciously nuts worrying whether their favorite characters can escape the blast.

The principle goes somewhat flat in The Speckled Band, for just as we surely know the danger Enid is in, we’re equally sure Holmes will come to her rescue in Act II. Which he does.

David Whalen, a veteran stage Sherlock, portrays the detective as the kind of savior you’d want. To invoke a silly-sounding word, he’s unflappable—suavely dropping humorous remarks under duress, and penetrating keenly to the heart of the matter in his pursuit of truth and justice. 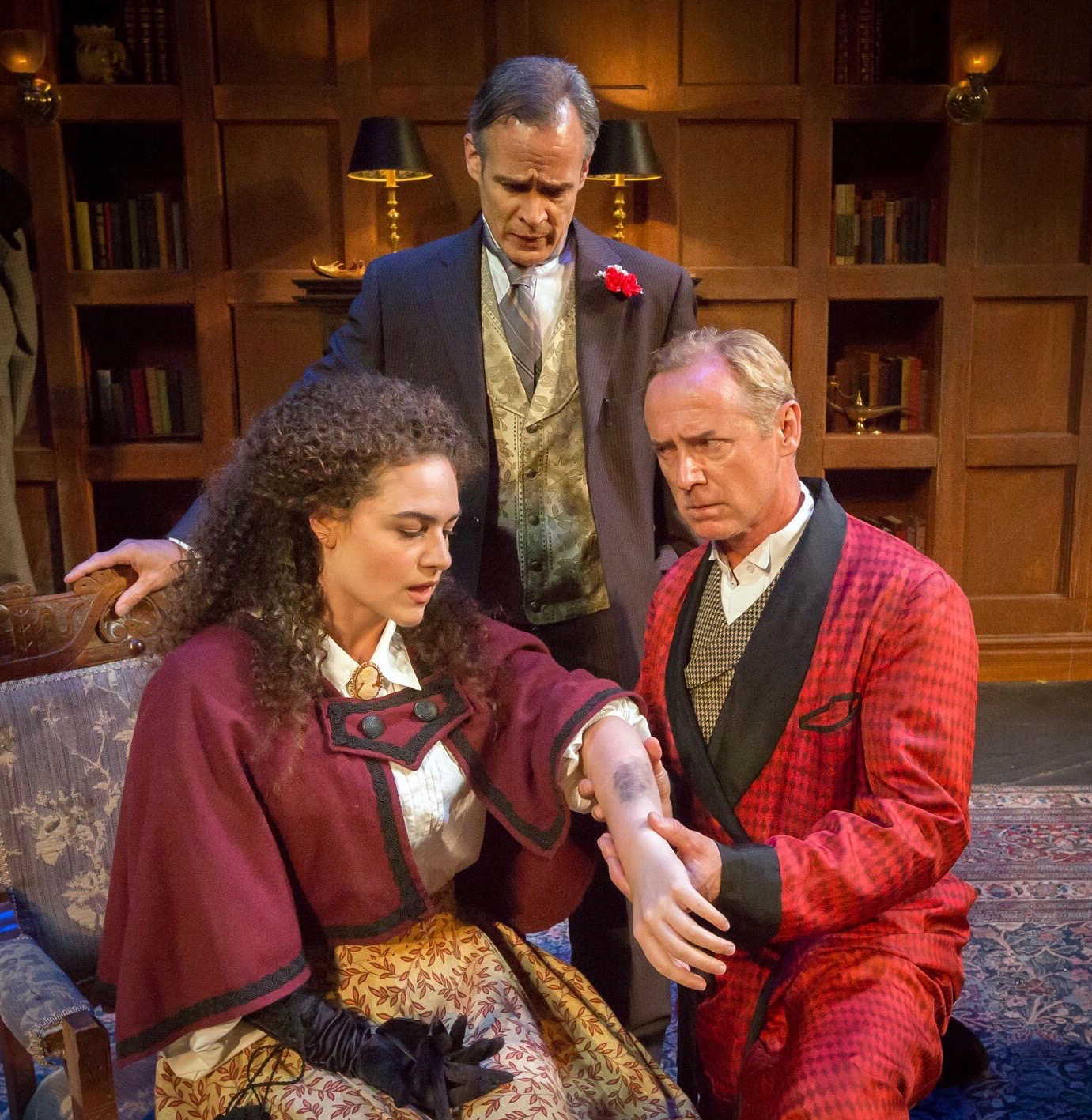 The bruise on Enid’s arm is a sign of her stepdad’s abuse. Jessie Wray Goodman is the heroine seeking help from a kneeling Holmes; Watson (James FitzGerald) looks on gravely.

But wait a minute. If the suspense is only semi-suspenseful, what keeps The Speckled Band going through Act II? Several things help. They include the finesse of good actors playing deftly written parts. Along with Whalen’s Sherlock and Goodman’s frightened but resolute Enid, we’ve got James FitzGerald as an earnest Watson—plus a role-switching Ethan Saks, who is dramatically on key as a serious character, and maniacally brilliant in an interlude of comic relief.

On Rylott’s household staff, David Crawford quavers pitch-perfectly as the beleaguered and oft-beaten butler, while Lisa Ann Goldsmith struts her part as a conniving maid with appropriate arrogance. Granted, most characters are stereotypes, but stereotypes done well can hit home.

And speaking of hitting, there’s Rylott. He alone is sufficient to keep the play going. He’s a monster, and Tsoutsouvas plays him monstrously. He makes you cringe; he makes your skin crawl; he’s a human wrecking ball.

But wait another minute. Don’t we see enough of that stuff in real life?  Why, perchance, should we pay to see it re-enacted in a theater?

Maybe for the same reason the crowds of 1910 did. In the theater, the good guys win. And the bad guy’s badness comes back to bite him. It’s elementary.

Through June 30 in the Charity Randall Theatre at the Stephen Foster Memorial, 4301 Forbes Ave., Oakland. For tickets and further information, visit Kinetic on the web (and follow the links) or call 1-888-718-4235.