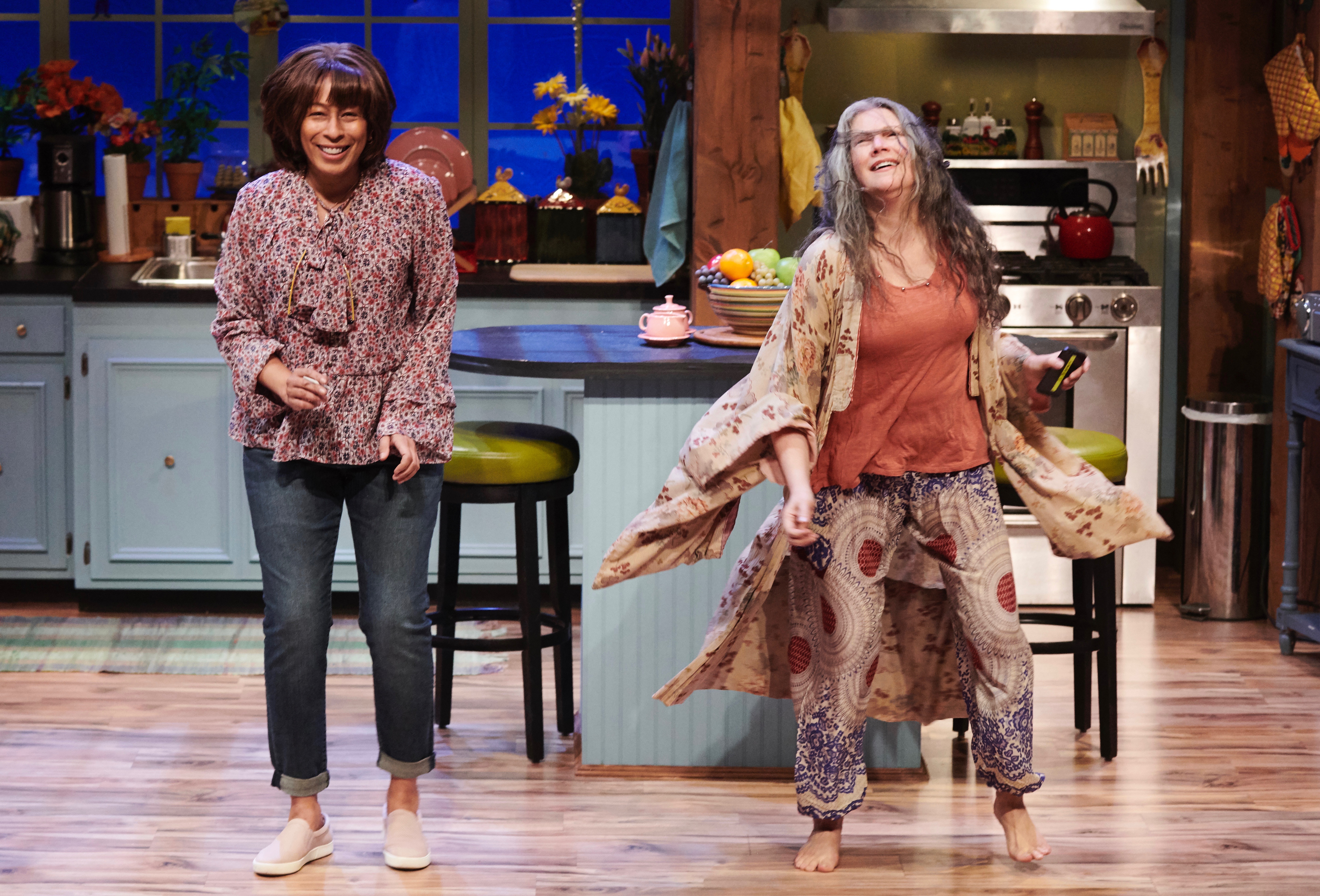 Do girls really just wanna have fun? Sharon (Tamara Tunie, L) takes cues from Robyn (Laurie Klatscher) in that regard.

Jen Silverman’s play The Roommate has been praised in theater circles because it provides lead roles for a pair of women over 50—not as moms or grandmas, but as characters wrestling with their own woman-over-50 issues. That’s good news in terms of inclusivity, and if it’s reason enough for you to see the production at City Theatre (through March 24), come right ahead.

Co-stars Tamara Tunie and Laurie Klatscher are fine actors. This being a two-person play, they share the spotlight throughout. Lots of people are getting a kick out of watching them get into it.

And what do they get into? Into a pickle that’s intriguing—although I, for one, found aspects of the play to be frustrating. The Roommate is a tricky one to review. We could borrow a term from Shakespeare analysis and call it a “problem play.” I’m going to call it a comedy-drama about transgression and identity theft, or maybe not, and riff upon it at some length. Ramble with me if you will.

A Gay Life, a High Life

Sharon (played by Tunie) is an Iowa City housewife turned empty-nester. Her son has moved on and she has “retired,” as she puts it, from a loveless marriage. She takes in a boarder, and her new roommate—actually, housemate—is a trip.

Robyn (Klatscher) breezes in clad, psychedelically, like the Ghost of Sixties Past. Clearly she has lived her 50-odd years in an odder milieu than Iowa’s middle class.  Yet both women meet graciously in the play’s first scene: Robyn is vegan? No problem. Cheerful Sharon offers to set aside separate pots and pans.

The opening sequence is cleverly scripted, weaving exposition and sitcom-style humor into the women’s get-acquainted chatter. Sharon is shocked to learn Robyn is from The Bronx, a dangerous place. Surely she’ll be happier in Iowa, where it’s safe, Sharon explains—except for the tornadoes, but if you hide in the basement, you’re OK—at which news Robyn is the one who freaks.

Sharon’s son lives in New York City. He’s a fashion designer. But he is “not homosexual,” Sharon insists. Even though all his friends are, including the girlfriend he trots out when Mom comes to visit. She’s homosexual too, but not the boy himself, uh-uh.

“I’m gay,” Robyn says. Sharon shifts quickly into effusive tolerance mode, which seems to mend the offense. Robyn breaks out her smartphone to play music they both can boogie to, consecrating their new friendship with a Janis Joplin tune. 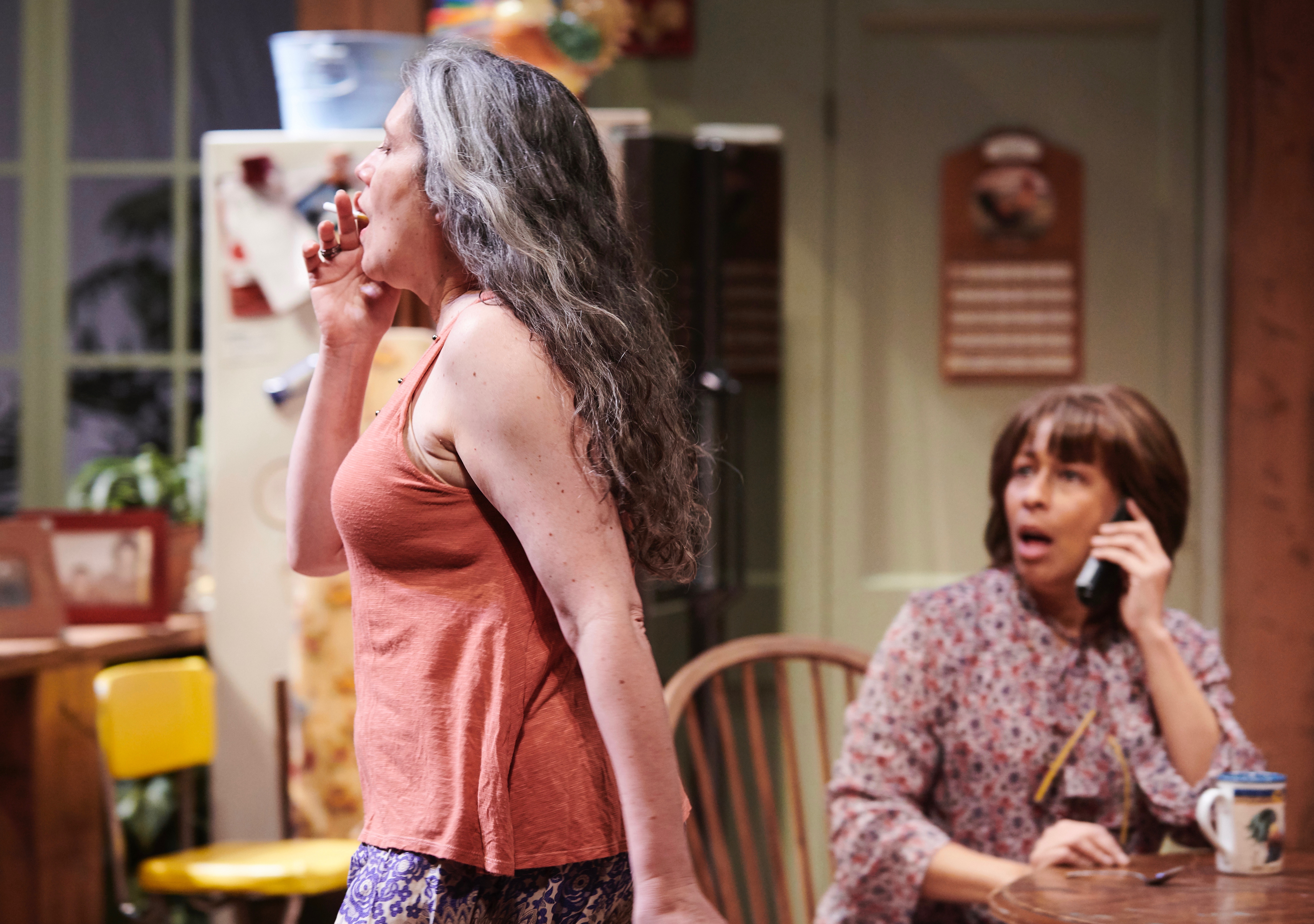 Robyn is smokin’ and Sharon is open-mouthed.

So far, The Roommate looks like a culture-clash comedy headed for a happy melting-pot ending. Robyn’s next contribution is literally pot, an herb that Sharon has never tried, so now she will, and ne’er was a peace pipe more gladly smoked. But then the plot thickens.

Sharon finds evidence that her roomie is on the lam from a criminal past. Not only dope-dealing, but also phone scams: ripping people’s credit cards with a phony charity pitch. And Sharon’s reaction? Why, here’s another new Robyn game to try!

Some hilarious dark-comic moments ensue. My favorite comes when Sharon, high as a kite, gets a sucker on the phone and delivers a rambling, surreal sales pitch that reaches far corners of the cosmos before orbiting back to secure the card number. Apparently she has led her victim to see the cosmic connectedness of giving from the heart.

Funny though they may be, such deeds are dirty and do not point to a happy end. The questions for us theater-goers are: What manner of play hath the playwright, via City Theatre, wrought? And how are we to take it?

Comedy that turns serious, or even tragic, is cool. It mirrors a pattern of real life, and that much we can buy easily. The Roommate, however, presents complications.

Of Myth-Making and Monsters

First, we have implausibilities. The play is set in the present, and if the women are in their mid-50s, they’d have been teenagers in the late 1970s, early ‘80s. Does that compute with Robyn growing into an aging hippie who loves Janis Joplin? I’d have pegged her as a late punk-era teen who frequented CBGB and resonated with Patti Smith or Joan Jett. But Joplin is iconic and Sixties re-enactors are ever among us, so we’ll give Robyn a pass.

Sharon is more problematic. How cloistered are they in Iowa? Would a woman her age fail to even recognize the pungent smell of weed at first whiff? How blind (or how whatever) could she be not to see, or not want to see, that her boy is gay? Given the whole picture of a strait-laced Midwest mom, wouldn’t we sort of expect her to be portrayed as a fundamentalist church lady (which she isn’t)?

In short, I’m confused—worried that I’m applying stereotypes while complaining that the play’s stereotypes seem out of tune. And by the way, doesn’t it seem quite unlikely that Sharon would suddenly shed the patterns of a lifetime and morph into a snaky thief?

Yet the play can be defended on all these counts. Characters and events don’t have to be plausible to make a good story. Consider two novellas from the 1800s: Mary Wollstonecraft Shelley’s Frankenstein and Charles Dickens’ A Christmas Carol. Both have become deathless stories, probably the most-adapted stories of modern times.  Nobody cares about the implausibility of Frankenstein’s monster or Scrooge’s therapeutic transformation in a single night. These stories have attained the status of myths.

And maybe that’s the best way to view The Roommate, taking it as a modern myth or fable. Granted, it doesn’t have the fantasy elements that Shelley and Dickens employed. But the play does have a monster.

The monster is Sharon. Early on, we get clues that she’s a liar and more. She has to know the son is gay. She just won’t admit it, for reasons perhaps too warped to delve into here. Furthermore, Sharon is a transgressive type—in fact, the worst type of transgressor.

She’s not content to break the social bounds that she has lived within, by smoking dope and other forms of self-experimentation. Time and again (the phone scam is only one example), she crosses the line—invading the personal space of others, taking what belongs to them, tampering where she shouldn’t, doing harm. In that sense, she’s a monster to be wary of. 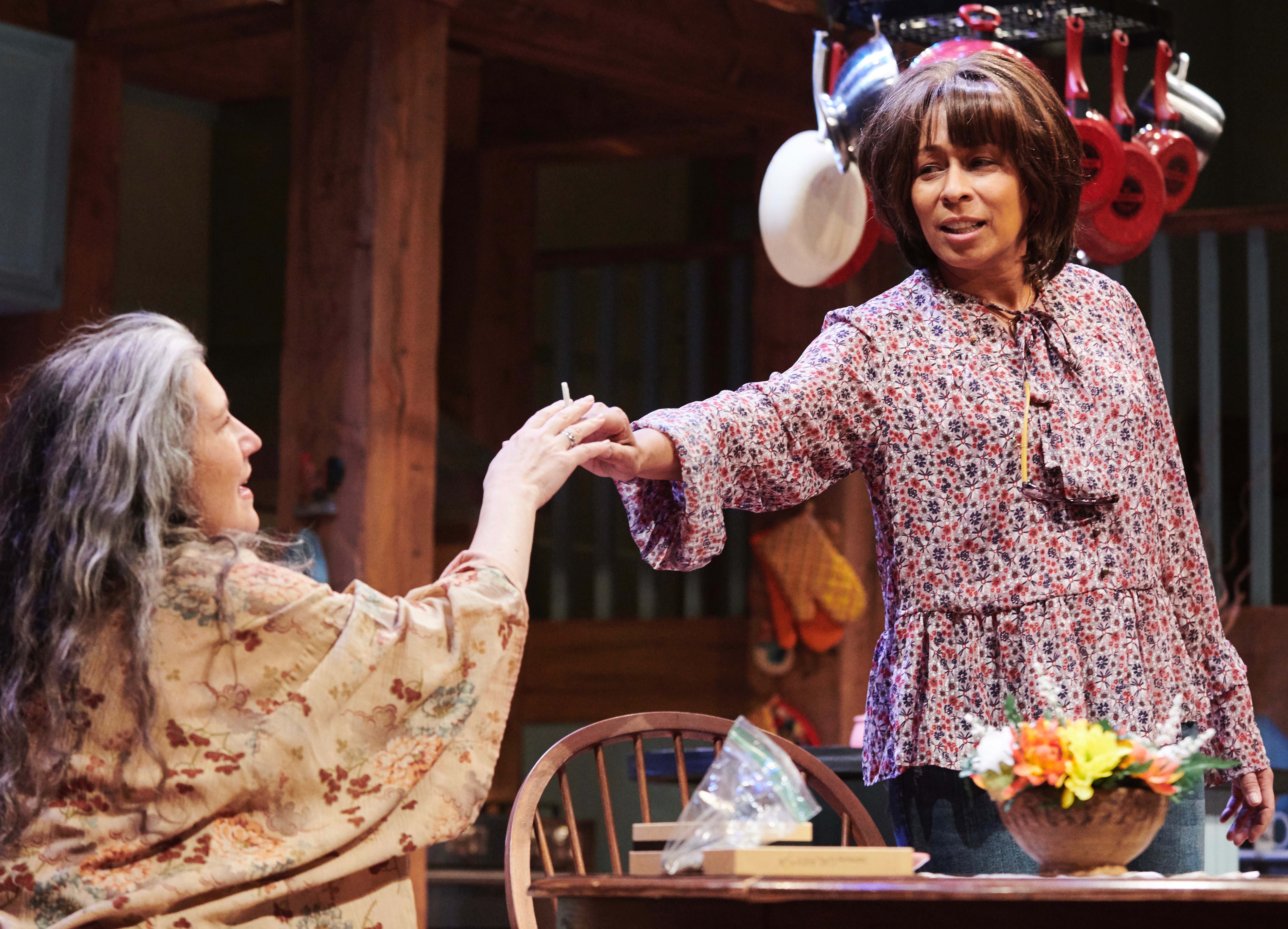 As the torch is passed, a new Sharon rises and looms.

But at the same time Sharon is a monster to be pitied. All through her “breakout” phase, she’s emulating Robyn. One could rightly say she’s trying to be Robyn. It’s an ultimate version of identity theft, and it is a sad, sad misdemeanor: being so dissatisfied with your own life that you try to live someone else’s. The fact that Robyn, for her part, is trying to leave behind her nasty past makes it all the more ironic.

A truly touching play, then? Not quite, at least not for me. The play’s themes should strike chords with almost anyone, except I wasn’t feeling the music, and I don’t think my not being a woman is what got in the way.

The Roommate came across to me as wonderfully written in some places, clunky and slow in others. And the story felt as if it was unfolding in a halfway zone: too improbable (or “inauthentic”) to be viewed realistically, not far enough over the top to soar in the realm of dark-comic myth.

The play calls to mind another one about an encounter between a naughty person and a strait-laced person: Sam Shepard’s True West, featuring a pair of middle-aged brothers. What helps to drive that one is the zany, mesmerizing bad-boy character, Lee, who has been played by notables from John Malkovich to Ethan Hawke. The equivalent character in The Roommate, Robyn, isn’t written to be as galvanic. Too bad. An opportunity missed.

The parallels and contrasts between the plays are interesting, though. In True West, Lee actually tries to take over his nicer brother’s nice life—as in, move over, bro, I can do this better than you—while nice-guy Austin tries to prove he can be a badass. Shepard, in his notes on True West, said he “wanted to write a play about double nature,” implying that the brothers are two sides of the same human coin.

Isn’t The Roommate about double nature? The women are partners in dividedness. I’ve even given you my divided opinions. If you’re down for exploring the divide, check it out.