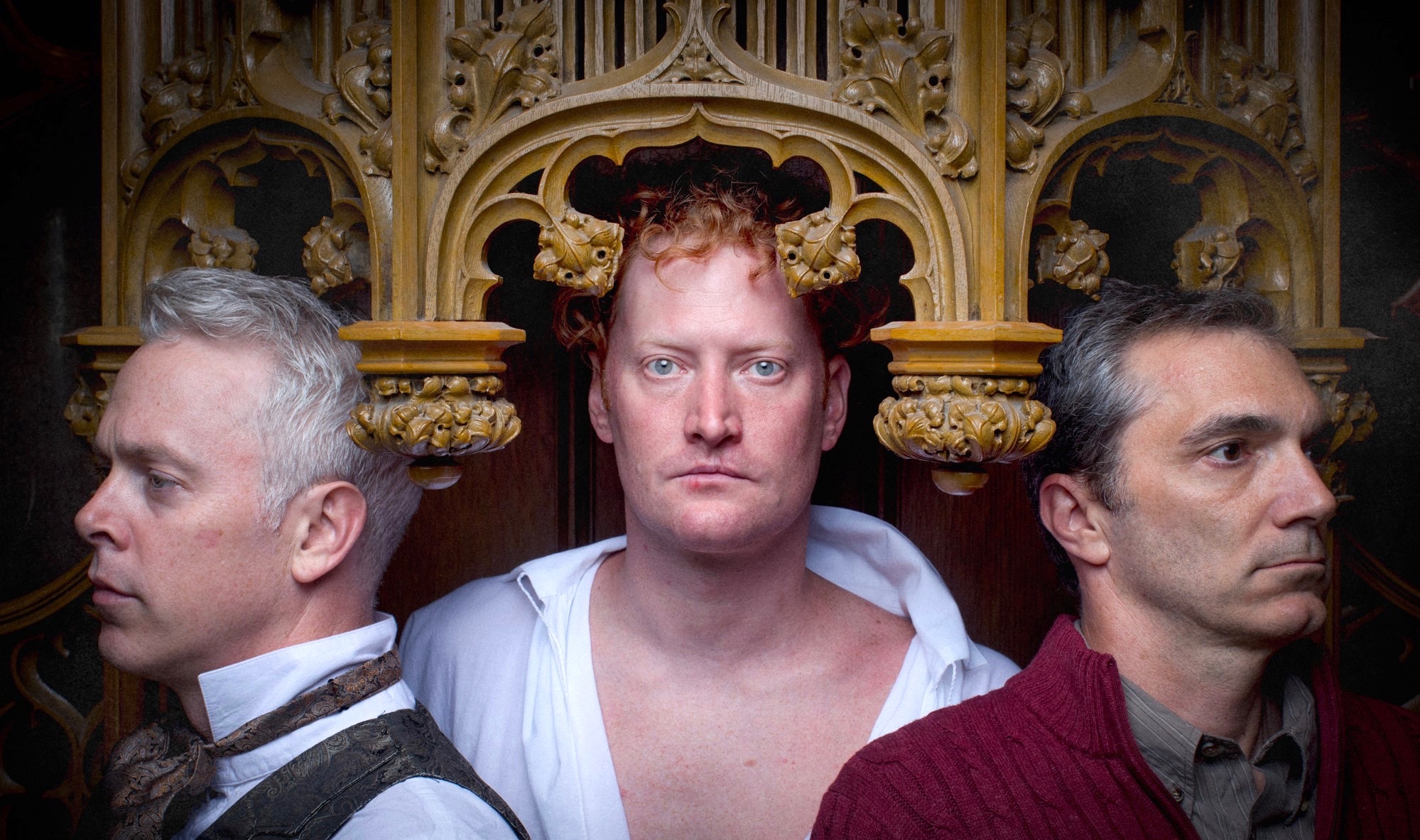 History has many faces. So does deception. In Quantum’s ‘Chatterton,’ actors (L to R) Tim McGeever, Jonathan Visser, and Tony Bingham play key figures in a web of mystery that spans centuries. (Photo: Jason Snyder)

In the mystery tale “The Garden of Forking Paths,” a learned Chinese nobleman announces he is retiring from public life to go off and “construct a labyrinth.” Years pass, with reports that he is hard at work, but after his death not a trace of the fabled structure can be found anywhere. All he has left behind is the manuscript of a long and strangely convoluted story, which defies understanding until someone realizes: The story is the labyrinth.

That tale was written by a master mystifier, the late Jorge Luis Borges. Too bad he can’t come to Pittsburgh for the world-premiere run (through October 28) of Quantum Theatre’s play Chatterton. Working from a different sort of subject matter, Quantum has constructed a labyrinth with a few layers of intrigue added.

Chatterton consists of at least five stories woven together—there might be more, depending on how you count. The stories keep you surprised and guessing as you walk through them—and you literally walk, because the play unfolds inside a physical labyrinth, corkscrewing through scenes that are performed in various chambers, nooks, and crannies of the historic Trinity Cathedral Pittsburgh.

Plus, the guided tour includes time travel at no extra charge. For one scene, you might be up in the choir loft of the majestic cathedral, face to face with a wild-haired man dressed in a frock coat and knee stockings. This is poet Thomas Chatterton (played by Jonathan Visser), gleefully breaking the fourth wall as he tells you how he perpetrated one of the great literary hoaxes of the 1700s.

Next—or perhaps before, it doesn’t matter—you are in a room made up as the back room of a 21st-century art gallery, where art-world types are wrangling over a classic dilemma. Certain abstract paintings attributed to a famous artist turn out to have been forged. Does it make ethical sense to expose the forgeries or financial sense not to?

You also get visits to London in the mid-1800s, periodic installments of a modern-day detective story, and more. They’re punctuated by flashes of theatrical brilliance that light up the trip. The cavernous sanctuary of Trinity Cathedral is built to resonate with music, and it resonates wonderfully at the times when Chatterton sings. Since the play is set in England, there’s plenty of witty Brit repartee. (“Dan, have you ever made love?” “No, I buy it ready-made.”)

And some moments of wordless, physical acting have tremendous impact. In the mid-1800s story, Gayle Pazerski plays the long-suffering wife of an insufferably egotistical man. At last she makes a bold move to break loose. Clad head-to-toe in Victorian fashion, she walks unannounced into the home of another man she rather likes. She faces him fiercely from beneath her bonnet. And when she suddenly removes the bonnet, standing bare-haired and proud, it’s more powerful than any shedding-the-clothes nude scene in a movie.

All the Backstory You May Need

There was a real Thomas Chatterton, and he was a prodigy. Born in Bristol in 1752, he wrote serious poetry before the age of 10, and controversial poems not long after. He composed them in a weird, self-invented form of archaic English, claiming they were written by a medieval monk whose work he had discovered.

More than a few people bought the story, but eventually, Tom was outed as a naughty lad. So he turned to writing sly satires and whatnot, cranking them out prolifically though never being paid much, until at 17, in a rented attic in London, he swallowed arsenic.

Chatterton’s suicide became the proverbial great career move. His genius was belatedly recognized. His tragic end was memorialized, in verse, by famous poets for many years to come. (Wordsworth: “I thought of Chatterton, the marvelous Boy / The sleepless Soul that perished in his pride…”  Coleridge: “Athirst for Death I see thee drench the bowl!”)

In 1856, British artist Henry Wallis won fame for his dramatic painting “The Death of Chatterton.” Then, more than a century later, came Peter Ackroyd’s 1987 novel Chatterton. This head-spinner is the basis of Quantum’s play. Ackroyd imagined the additional, fictional twists and turns that Quantum Artistic Director Karla Boos and writer-actor Martin Giles adapted for live performance.

In the play, we have a couple of modern literary sleuths digging through old documents which seem to indicate that Chatterton may have faked his death. And that he went on to enjoy a jolly secret career, ghostwriting poetry which was peddled under the names of other poets. 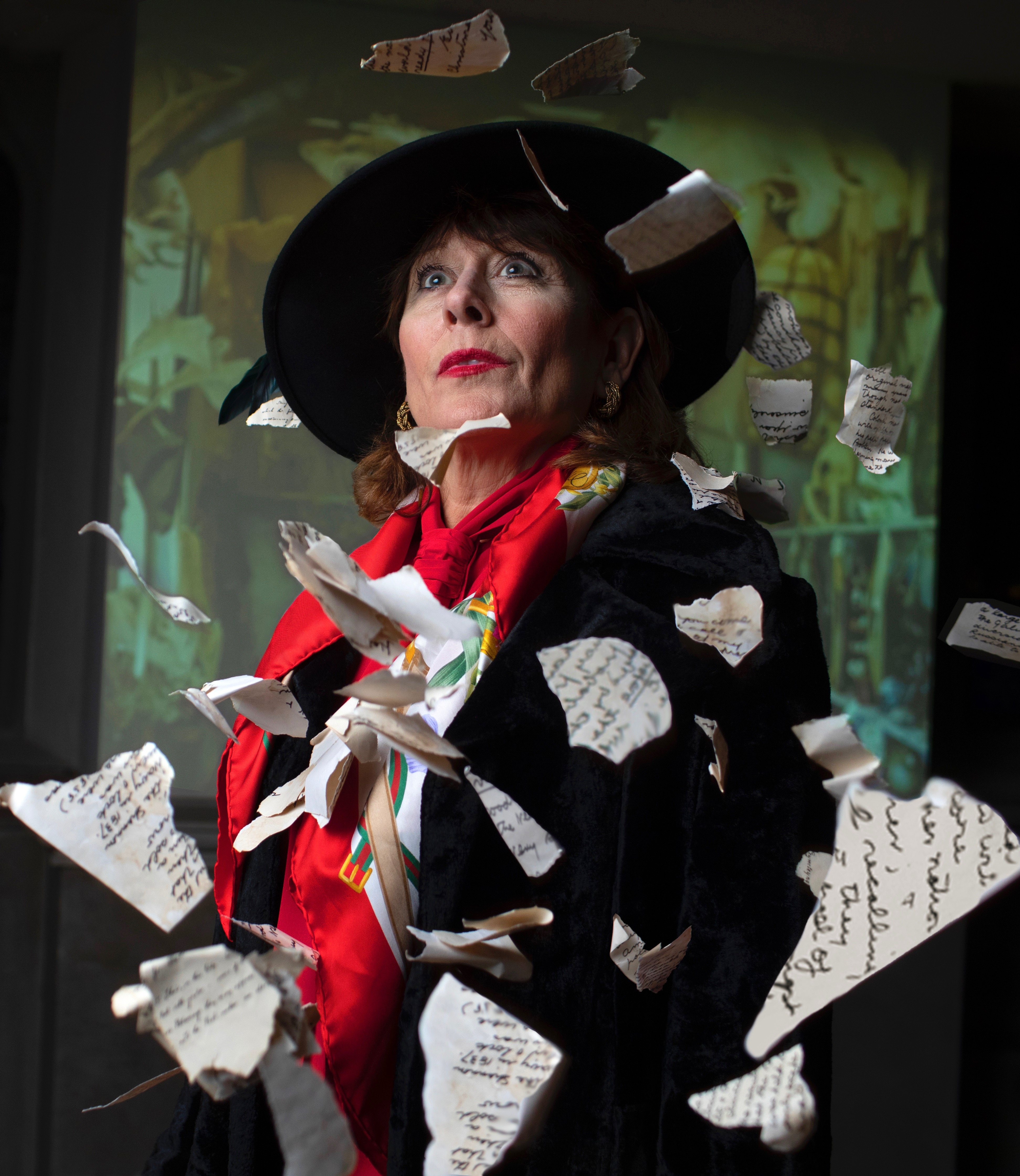 The chief sleuth is married to a woman who works in the art gallery, which is also frequented by two ditzy, artsy older women, one of whom may have a literary scam of her own in progress. Meanwhile, the “Death of Chatterton” painting is the reason we keep coming back to mid-1800s London … while Chatterton himself is the reason we keep seeing Chatteron, who maybe died young or didn’t …

So it all comes together, you might say. Or more accurately, the story lines go flying off into separate orbits that all revolve around a cluster of common themes, such as: Who knows what’s true? And are you going to believe your lying eyes, or reserve judgment until you hear what the rest of the audience saw?

The latter question arises because no one sees all of Chatterton, at least not in a single visit. On arrival you are issued a pocket-sized card with icons showing which audience groups you will follow through the maze. Different groups see different sets of scenes. You get to compare notes with others at intermission, as my theater-going friend and I did, when everyone sits down to a catered dinner in the cathedral’s cafeteria. (The meal is included in your ticket price.)

But a lot of the big stuff happens in Act II, after dinner—and some of it happens right then and there in the cafeteria, on a little stage where several characters are having a dinner party that’s part of the play. Suffice to say it is not the kind of party you would want in your home.

To summarize, there’s a heck of a lot going on in Chatterton. Don’t worry too much if you cannot follow everything. The sheer spectacle—“the experience,” as my friend put it—is dazzling. As for me, I felt that the main thing lost in the shuffle was a chance to get better acquainted with some of the characters. One wants to be able to build a relationship with the characters, in order to care about them. There were times when I felt this process being fractured. Whenever it did take hold, for me, it was quite moving. I just wished to be moved more often—in a more profound sense than moving on to the next scene.

But why take my word? Don’t let my desire for perfection be the enemy of the good. Chatterton is an experience worth experiencing.

Quantum Theatre presents Chatterton as part of the Pittsburgh International Festival of Firsts. Through October 28 at Trinity Cathedral Pittsburgh, 328 Sixth Ave., Cultural District. For showtimes and tickets visit Quantum on the web or call (412) 362-1713.

Technical direction is by David JM Bielewicz, set design by Stephanie Mayer-Staley, and media design by Joseph Seamans. Credit, too, to the rest of the team who’ve done a fine job on Chatterton.